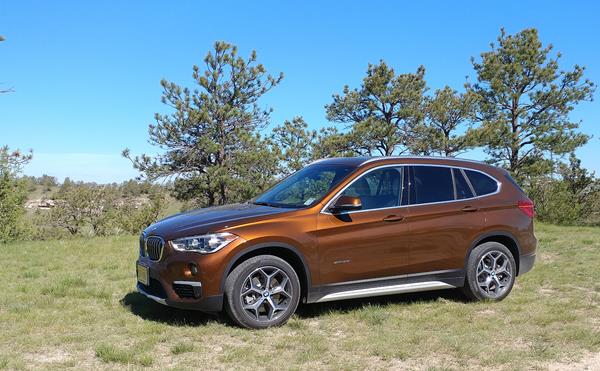 The 2017 BMW X1 was introduced last year as a new Sport Activity Vehicle from the German automaker. Meant as an entry into the compact luxury crossover market, the X1 is neither a traditional crossover nor a traditional sedan. It's somewhere in between. The X1 is based on the MINI Cooper's underpinnings, making it light on its feet and high in performance for a compact.

The 2017 X1 is peppy and nimble with eye-catching looks and a niche feel that makes it stand out among stiff competition. This 5-passenger luxury compact crossover has standard all-wheel drive, premium content, a good-sized touchscreen for infotainment, and just one well-outfitted trim level. With this much standard equipment, it's difficult to overlook the X1's promise of fun and versatility. 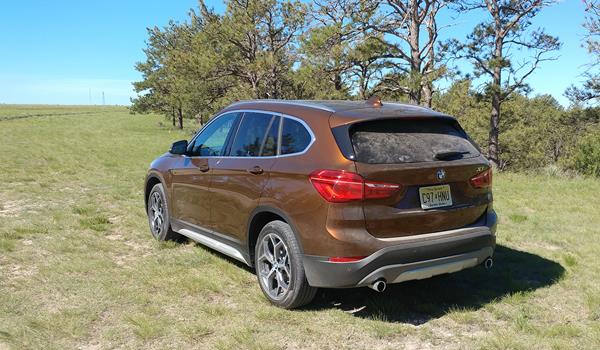 The 2017 BMW X1 is an unusual car for the segment, given that it's a mishmash of a crossover and a sedan. BMW calls this a Sport Activity Vehicle (SAV) and that definitely fits the X1's persona.

The front fascia is all Bimmer with a kidney grille and unmistakable BMW crossover-style design for the bumpers and hood line. German styling keeps it simple, aiming for a refined appearance and the crossover muscle is tempered by the X1's simple body styling and narrow wheel wells.

A narrowing greenhouse and rounded roofline make for a sporty look, while the rear clips off with a wagon-styling that bespeaks the BMW X1's stepping away from traditional crossover design. It's styled as a fastback for emphasis. From the side and rear, only the X1's wide body stance and high clearance give away its crossover roots.

The look for the BMW X1 is polarizing, but most will like it either as it is or for the heads it turns as it blurs the lines of normal for the compact crossover segments.

The X1 gained a lot of interior space from last year's remodel for the vehicle. With its roomier interior, it's now much more likeable. Add in the premium details and excellent materials alongside the typical Teutonic workmanship that comes with a BMW and you have a winner.

The dashboard is lifted and light, giving a modern simplistic feel for the European minimalist feeling. Straight lines and gentle curves mix together to accentuate that feeling for the interior's design. Most things are tucked or hidden away, making surfaces appear clean throughout the dash and center console. Only the necessary knobs, buttons and infotainment screen are there, with sliding covers keeping USB ports, 12V plugs and other items out of sight when not in use.

Seating is excellent with the front seats of the X1 and are as good as any BMW on the line. Comfort and bolstering are key, with plentiful adjustments. The rear seating is similarly well done with room for most adults to sit comfortably in the outboard positions. Child safety seats can be easily installed if no more than two are required. Adding a third could get cramped.

Cargo space in the 2017 BMW X1 is surprisingly large given the vehicle's size. On paper it's only about average at 17.8 cubic feet with the rear seats up and 58.7 with them folded. What isn't on paper is the easy access thanks to the huge hatch and its sloped opening.

Seats fold at the push of a button, and the center seat belt goes with the folded seat rather than being up in the roof. Another nice touch. 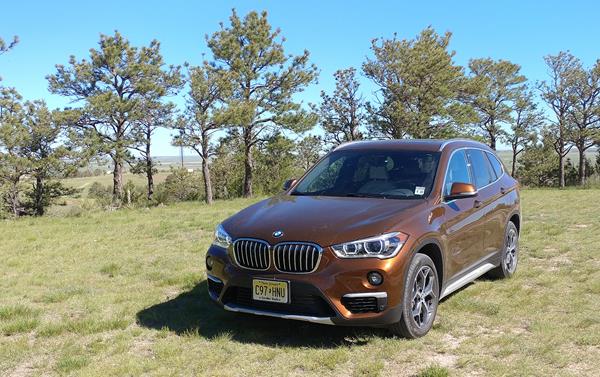 The iDrive interface for the infotainment is much better than average in the luxury segments. A 6.5-inch touchscreen is standard equipment, but the Technology package upgrades the screen to a huge 8.8-inch instead. We recommend that larger screen for its crisp output and easy-to-read sizing.

A command knob at the driver's hand, below the shifter, has quick buttons for menu movement and controls include knob turning, sliding and pressing. A touchpad on top of the knob allows entry of navigation and other inputs through finger drawing.

The X1's infotainment is quickly learned. Its menus, though sometimes long, are easy to navigate. Voice commands are also good in iDrive, making many things easier to do. Sadly, BMW's gesture control and other new infotainment options have not yet made it into the X1.

The 2017 X1 is EPA-rated at 26 mpg combined, with 23 mpg in the city and 32 mpg on the highway. Our average over a week's worth of driving was 26.5 mpg in all, making this a very fuel efficient tester given our altitude and frequent crosswinds.

The 2017 BMW X1 receives an "About Average" score from the J.D. Power and Associates Vehicle Dependability Study. Two safety recalls have been made for the 2017 model year, both for airbags. We note that the X1's warranty is a year longer and about 15,000 miles more than the segment average.

As of this writing, the National Highway Traffic Safety Administration (NHTSA) has not yet published crash test results for the 2017 BMW X1. The Insurance Institute for Highway Safety (IIHS) has published a full suite and it looks very good for the X1.

The IIHS gave the 2017 BMW X1 solid scores of "Good" across the board for its crash test results. That's the best possible. That makes the 2017 X1 a "Top Safety Pick," though we note that a "Plus" could be forthcoming once tests for active safety measures are available. 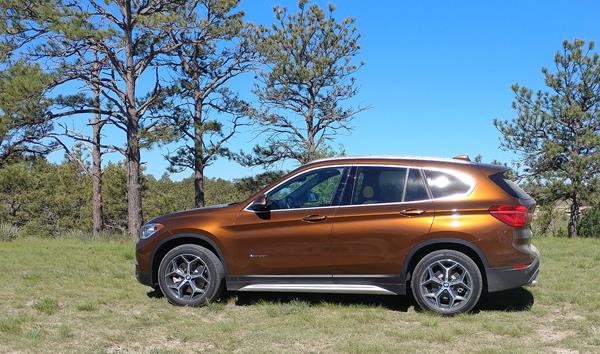 The 2017 BMW X1 is powered by a 2.0-liter turbocharged 4-cylinder engine that outputs 228 horsepower and 258 foot pounds of torque. This engine is straight out of the MINI line and does very well in the X1. An 8-speed automatic transmission and standard all-wheel drive are also included. Hill descent control is also included as standard.

The fast-moving torque delivery and small size of the X1 mean that it's extremely sporty for the segment. It launches from 0 to 60 mph in under seven seconds without hardship. Handling and steering are light and nimble and maneuverability is superb. The standard rear-view camera is a boon as rear visibility is not the best in this elongated wagon-ish crossover.

The 2017 X1 is well-mannered on the highway and passes with ease. It's quick around town as well, though road bumps can enter the cabin readily thanks to a sporty suspension tune. The fun engagement of the drive negates most of the disappointment that might bring.

The 2017 BMW X1 is very well priced for the segment, given its plethora of amenities. Most will probably add a package or two (we recommend the Technology package), but costs are reasonable and compared to many, the X1 is high in value. Most competitors do not include AWD or turbocharged engines as standard equipment.

Shoppers should look around because the luxury compact crossover segment is fiercely competitive and incentives are plentiful. The X1 remains a solid choice, unless a competitor has an extremely compelling price offering.

The 2017 BMW X1 is a hard target to beat, but looking at the segment does show some competition worth considering as alternatives. The Audi Q3 is similar in sportiness and appeal, but is smaller than the X1 and not as value conscious. The Lexus NX with its 200t package is a good choice, but doesn't meet the X1's sportiness overall. The Acura RDX is stiff competition for the BMW X1, but it's more expensive and a bit larger as well.

The 2017 BMW X1 offers a great mix of practicality, sporty driving, eye-catching styling and an excellent interior. With luxury levels of refinement, it's also reasonably priced and fuel efficient to boot.