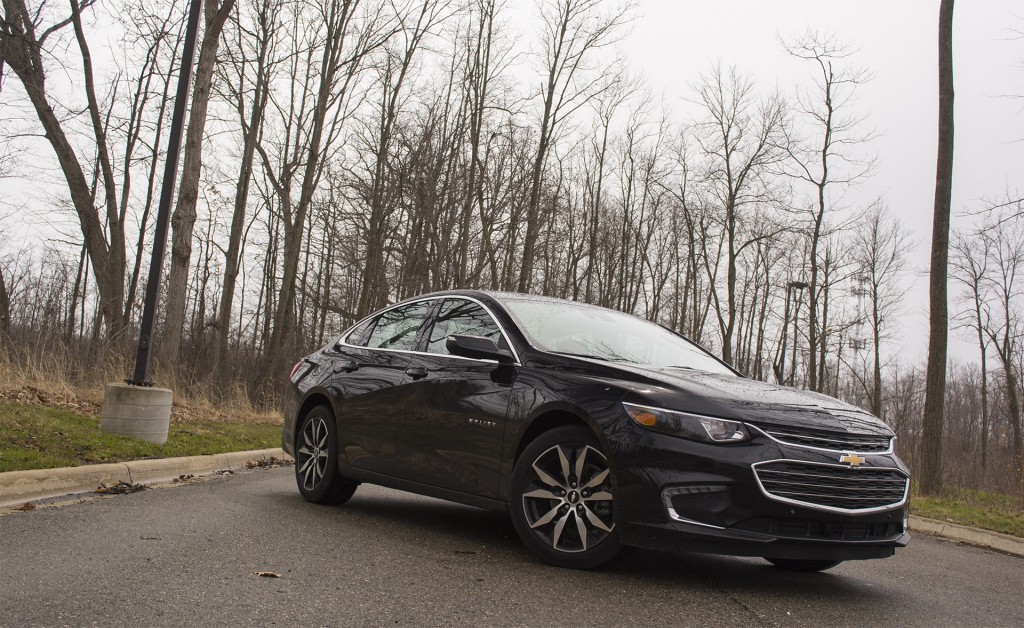 Overview (Final Score: C+) The midsize sedan class is one of toughest marketplaces to compete in as automakers constantly improve or introduce new models to try and beat the class leaders. Show up with a half-baked model and you'll be left behind. Sadly that is what happened with the last-generation Chevrolet Malibu. Chevrolet made a number of mistakes with this model such as having one of smallest back seats in class, only selling a mild-hybrid version for the first few months after its launch, and not being a good value when compared to other models. Sales of the last-generation model dropped precipitously and Chevrolet knew that next-generation model had to be put on the fast track. Last year at the New York Auto Show, Chevrolet introduced the 2016 Malibu. This new model hopes to right the wrongs of the previous Malibu and get Chevrolet back in contention.

What We Love About the 2016 Chevrolet Malibu

What We Didn't Love About the 2016 Chevrolet Malibu

No options available on the 2LT trim 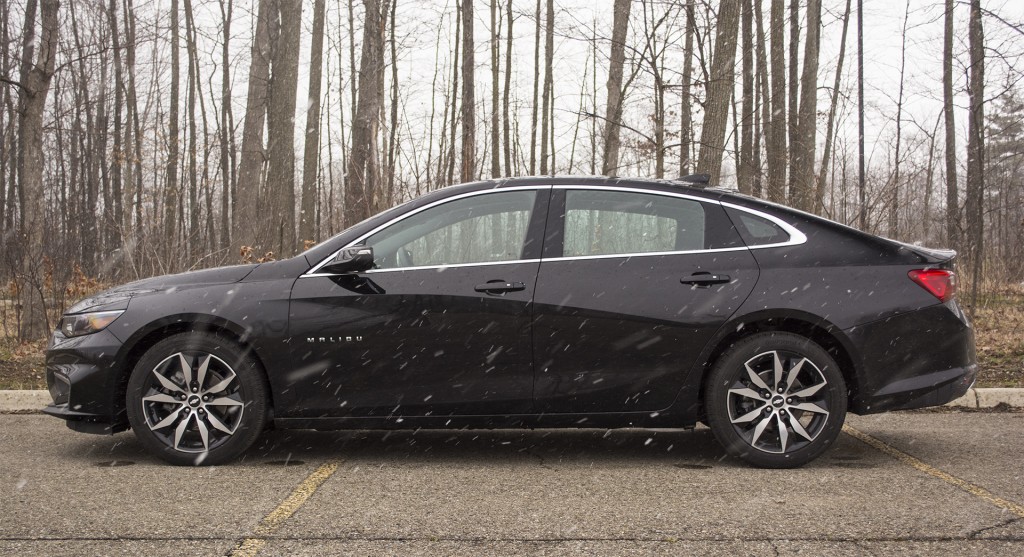 Exterior View (9/10) The 2016 Chevrolet Malibu is completely different in terms of looks from the previous generation. Park the new one to the last-generation model and you'll find yourself wondering if they are from the same company. The front end features Chevrolet's new face with wider split grilles and narrowed headlights. The side profile is where you see some influence from the Germans. For example, look at the rear roof pillars that blend into the quarter panels. It reminded us of the Audi A7. The back is very clean with a rounded trunk lid and chrome exhaust tips. 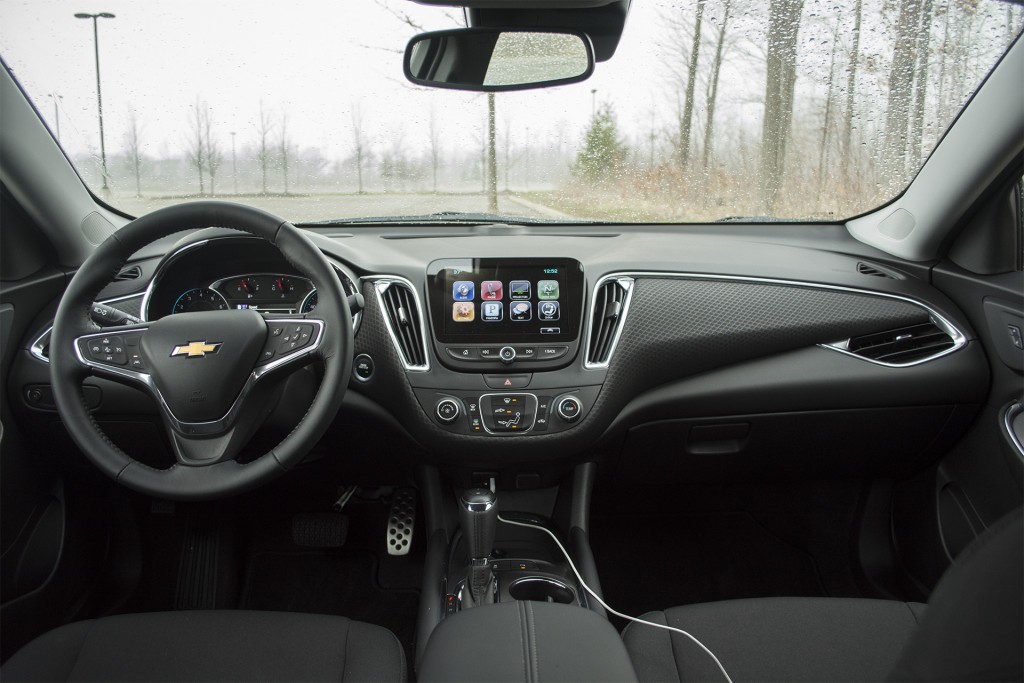 Interior Comfort, Quality and Ease of Use (7/10) While the exterior is a huge improvement, the interior is a bit of a mixed bag. The design is modern with flowing curves, a tablet-like screen, and contrasting trim pieces. Where it falls short is the material choices. There is a lot of hard plastics throughout the interior. Some of the plastics used are very cheap feeling. Not helping is a fabric covering on various parts of the dash. This would be ok if it was the base Malibu L. But our test Malibu was the 2LT, one rung below the top of the line Premier. For the price that Chevrolet is asking, we would expect some soft touch materials on various parts of the dash and better plastics. The 2LT comes standard with cloth, but there isn't an option for leather seats which we find slightly odd. The driver gets eight-way power adjustments for the seat, along with a tilt and telescoping steering wheel. Finding a comfortable position is no problem for any size driver. The back seat is much comfortable for most people with plenty of legroom. Headroom comes up slightly short for tall passengers due to the sloping roofline. In terms of trunk space, the Malibu offers 15.8 cubic feet. This about the average for the class. 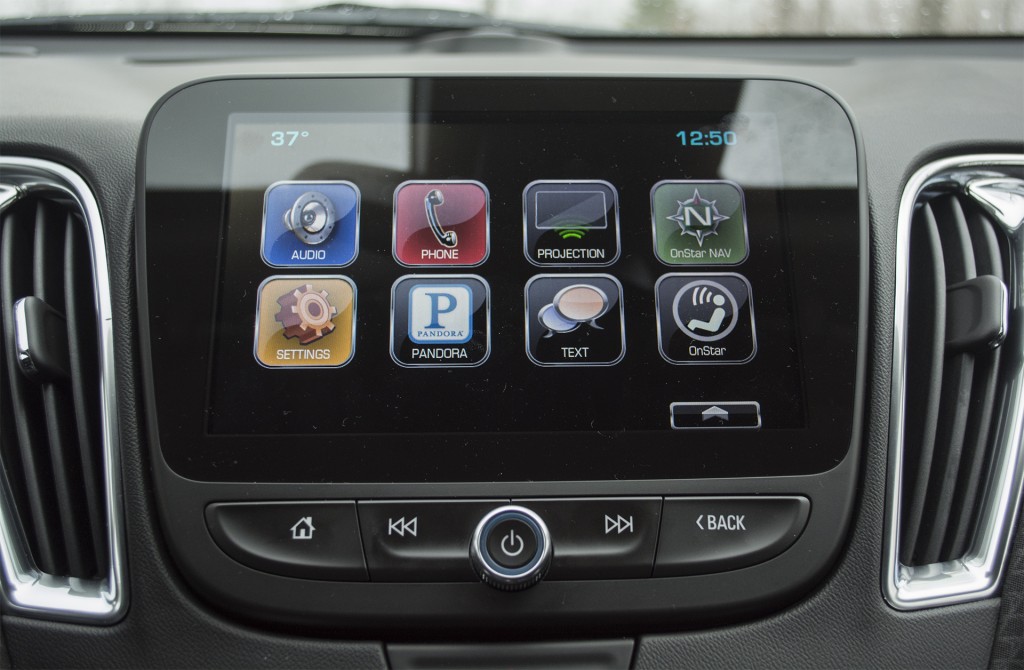 Technology (8/10) All Malibus except the base L come with Chevrolet's MyLink infotainment system. The LS and 1LT get a seven-inch screen, while the 2LT and Premier come with an eight-inch screen. The screen is very easy to read and vibrant, although direct sunlight can washout the screen. MyLink has been getting better since its launch a few years back with improved performance and better stability. There are still some performance hang-ups when it comes to switching audio inputs or going back to the home screen. MyLink also features Apple CarPlay integration. We tried out CarPlay and found it to be very easy to use. All you need to do is plug in a compatible iPhone into the USB port and hit the CarPlay button on the screen. What you'll be greeted with is something familiar to your iPhone's home screen. Certain applications such as Spotify and Audible can be used through the CarPlay interface to provide more entertainment options. But like the last vehicle we tried with CarPlay, we experienced some problems with certain applications crashing and MyLink not recognizing our iPhone. Recently, Chevrolet added Android Auto compatibility on 2016 models equipped with MyLink paired eight-inch touchscreen. If you bought a certain 2016 Chevrolet model before March, you can go to your nearest dealer to have MyLink updated. The Malibu features OnStar 4G LTE connectivity and Wi-Fi hotspot service. This allows you to connect up to seven devices to the vehicle's cellular connection to provide access to the internet. We like this service as it is consistently fast and reliable. But we can't help but wonder how many people would be willing to pay the $15 to $50 monthly charge - dependent on the data cap - once the free three-month trial is over. 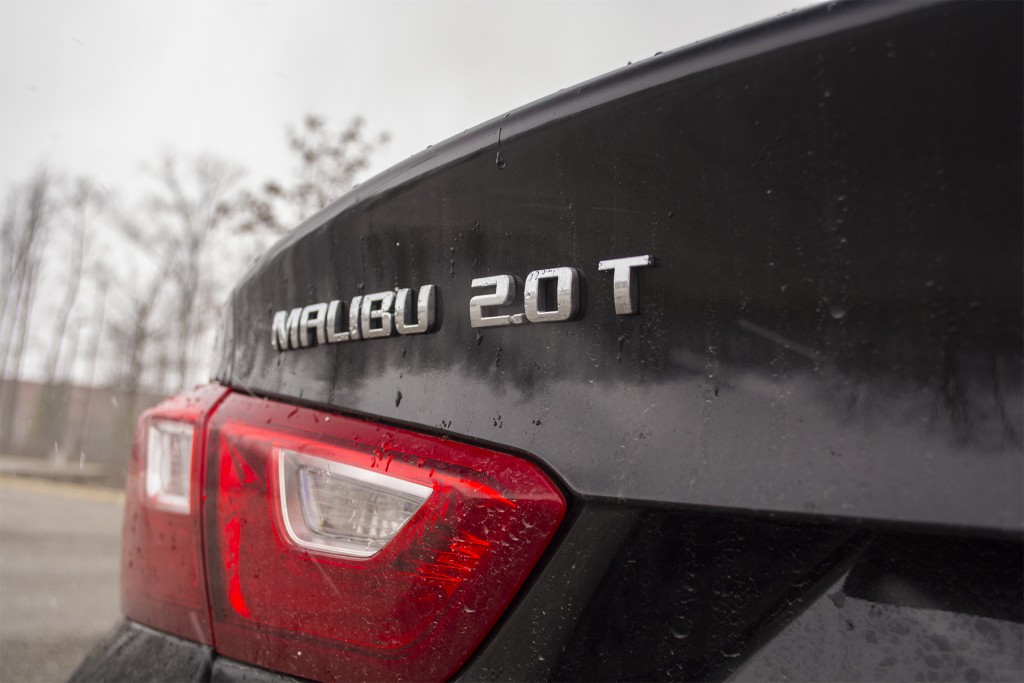 Fuel Economy (9/10) The Malibu's 2.0L turbocharged engine is rated by the EPA at 22 City/33 Highway/26 Combined. This is towards the top when compared to other midsize sedans when equipped with their more powerful engine. Our fuel economy average during our weeklong test landed around 27 MPG.

Predicted Reliability, Initial Quality Ratings (9/10) The 2016 Chevrolet Malibu appears to be following in the footsteps of the previous generation model when it comes to reliability. Consumer Reports is predicting that the 2016 model will be slightly above average in terms of reliability. J.D. Power predicts the Malibu will have better reliability than most of its competitors.

Safety (8/10) The National Highway Traffic Safety Administration has conducted their full battery of tests on the Malibu and awarded it a five-star overall rating. The Insurance Institute for Highway Safety has done their moderate front overlap and side impact tests and gave the Malibu their highest rating of good. Standard safety equipment for the Malibu includes antilock brakes, stability control, traction control, and a full assortment of airbags. Malibu LS models and above come equipped with a backup camera. The 1LT and Premier have the option of a Driver Confidence package that adds blind spot monitoring, cross traffic alert, forward collision alert with low-speed automatic braking, front and rear park assist, and lane keep assist. But the 2LT gets this package standard. We can understand this being an option on the 1LT, but also on the top of the line Premier? The Premier also gets an optional Driver Confidence package II that includes adaptive cruise control, automatic braking, and semi-automatic parking assist. One feature that will impress parents and annoy teenagers is Chevrolet's Teen Driver system. You can monitor such details as the distance driven, how fast the vehicle was traveling, and whether the ABS or stability control system came on. You can also have the audio muted until everyone buckles up, limit the audio volume, and set up a speed warning. We tried this system and can see the benefits of using this system as it does keep a driver in check. Just make sure you don't set up an easily guessed pin so your teens can turn off the system. 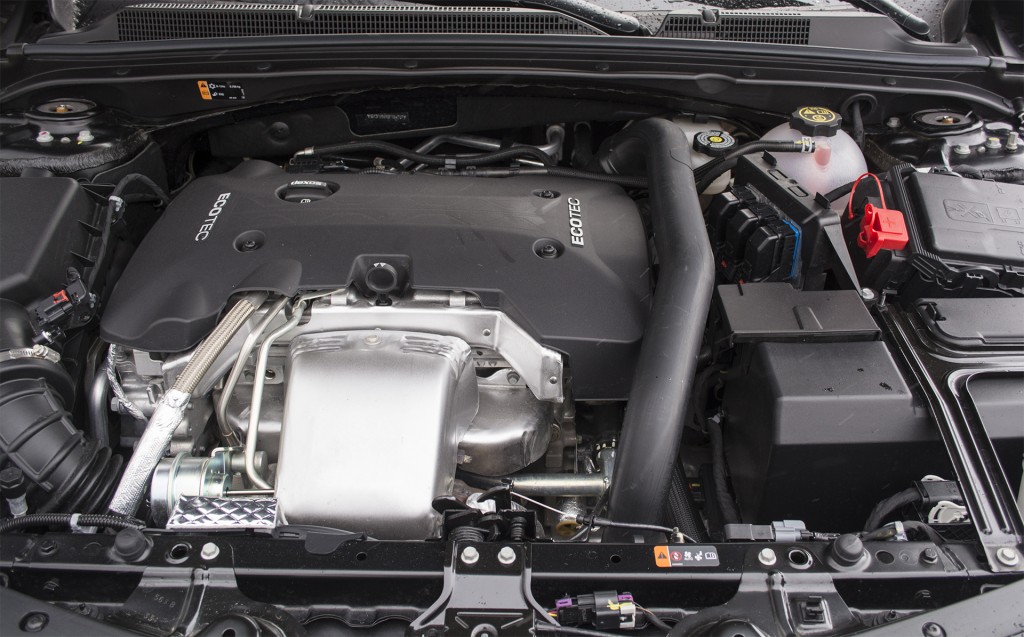 Performance (8/10) There are two powertrain combinations on offer for the 2016 Malibu. The L, LS, and 1LT feature a new 1.5L turbocharged four-cylinder with 163 horsepower and 184 pound-feet. This is a paired with a six-speed automatic. The 2LT and Premier use a 2.0L turbocharged four-cylinder with 250 horsepower and 258 pound-feet. A new eight-speed automatic comes standard with the larger turbo engine. The best word to describe the 2.0L turbo engine is energetic. The engine pulls strongly when leaving a stop and always some power sitting in reserve whenever you need to make a pass or merge onto an expressway. You think that your driving a V6 and not a four-cylinder because of how little racket or clatter enters the cabin. The eight-speed automatic delivers immediate and smooth shifts. Chevrolet strikes a nice balance when it comes to the ride-handling balance. The suspension is able to keep bumps and road imperfections from reaching the cabin. On curvy roads, the Malibu doesn't show much body lean and feels quite nimble. The steering feels direct, but some will be wishing for a bit more weight. Wind noise is kept to near silent levels, but road noise is abundant.

Pricing and Value (6/10) Pricing for the 2016 Chevrolet Malibu fits very much in line with other midsize sedans. The base Malibu L starts at $22,500, and the top of the line Premier kicks off at $31,795. Our Malibu 2LT tester starts at $28,620 and came to a final price of $29,495. Seems like a good value? Not really. As we mentioned earlier, the 2LT's interior doesn't feel that it is worth the $29,495 with loads of cheap plastics and a fabric covering on the dash. For the same amount of cash, you can get into another midsize sedan that looks and feels considerably better. Also, we are slightly bewildered there aren't many options available for the 2LT. The only one available is a Weather Protection Package that seems to only add a set of all-weather floor mats. So if you were hoping to get navigation or leather seats, you'll need to jump into the Premier. But the Premier also has a value problem as it doesn't come with blind spot monitoring, cross traffic alert, and forward collision alert with low-speed automatic braking as standard. You'll need to order an option package to get these features. This would be ok if the lower trim 2LT didn't have these features as standard. 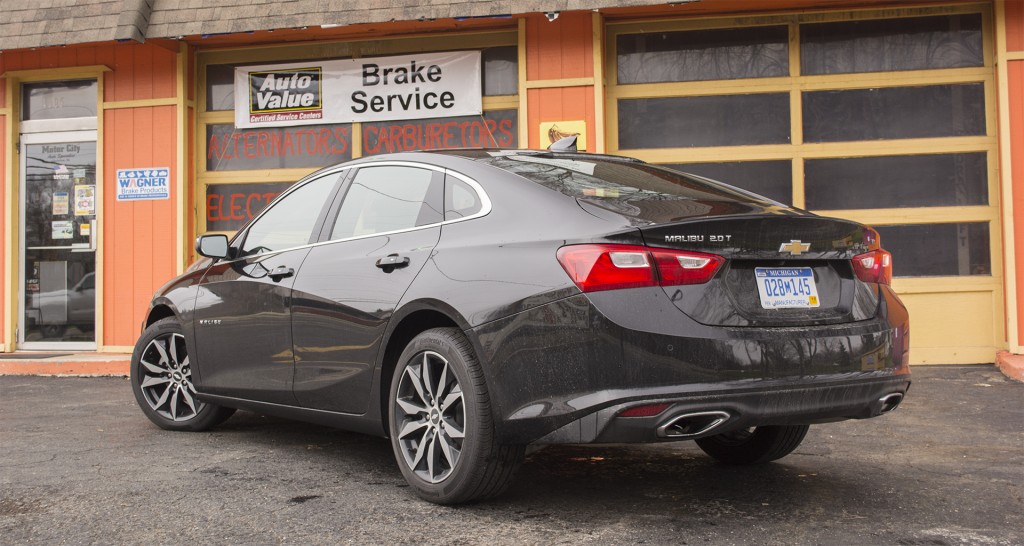 Total Score and Competitive Comparison (64/80, 80%) You have a lot of choice in the midsize sedan class. The Honda Accord, Nissan Altima, and Toyota Camry have an excellent reliability record and offer a lot of space for passengers and cargo. The Ford Fusion and Mazda6 boast sharp looks and are quite fun to drive. If you're looking for excellent value, then you can't miss out on the Hyundai Sonata and Kia Optima. Where does the 2016 Chevrolet Malibu fit into this class? Sadly in the middle. Chevrolet has put a lot of effort in improving the Malibu and it shows in terms of the exterior design, powertrain, safety, and how it drives. But the little things matter and Chevrolet has dropped the ball. The interior on our tester looks it should be in the base model, not one of the upper trims. Plus the value argument seems to be a bit out of whack in terms what you do and don't get. This is a sedan that deserves a spot towards the top of the midsize sedan class. But as it stands, the 2016 Chevrolet Malibu just sits in the middle, wondering why it is here.