The term classic, or even stronger word icon, is tossed around too frequently. But one or both of those words certainly applies to the Chevy Camaro. The 2015 version is relatively unchanged from the last model year, it will also be the last of the fifth generation of the Camaro. There's certainly nothing wrong with the 2015 Camaro, and it will stand the test of time as another successful vehicle for this classic muscle car. And certainly, the 2015 Camaro goes out with a bang as it makes room for the completely redesigned sixth-generation Camaro. While we look forward to that car, we will take a closer look at the 2015 version. 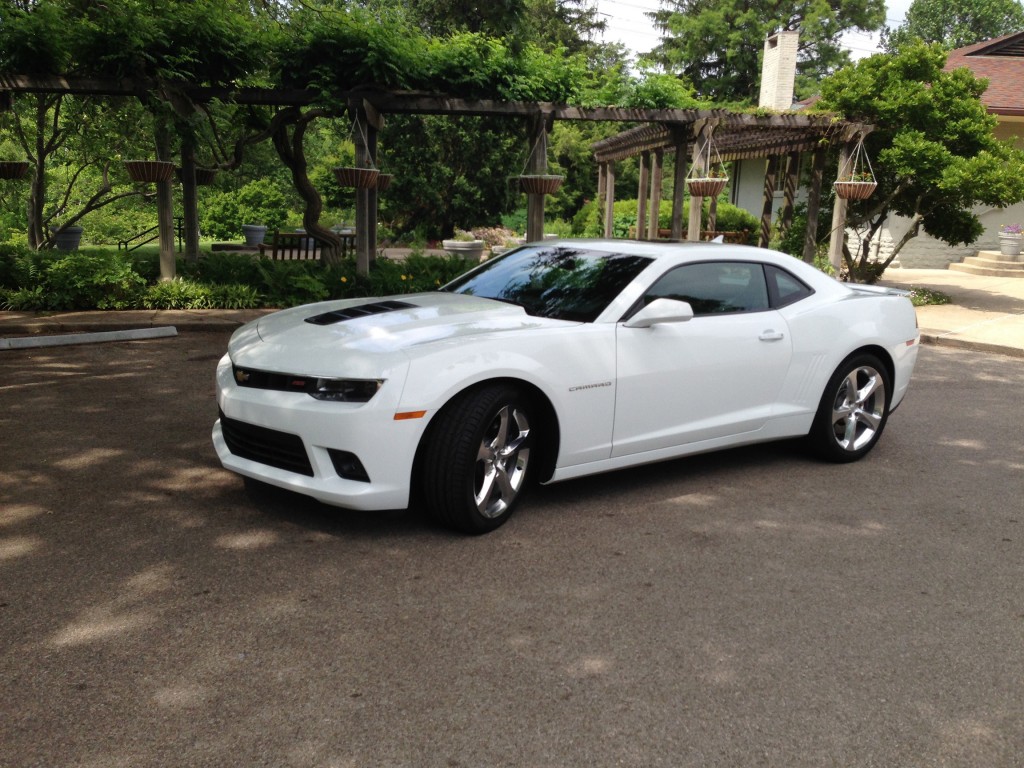 What We Loved about the 2015 Chevy Camaro


What We Didn't Love about the 2015 Chevy Camaro 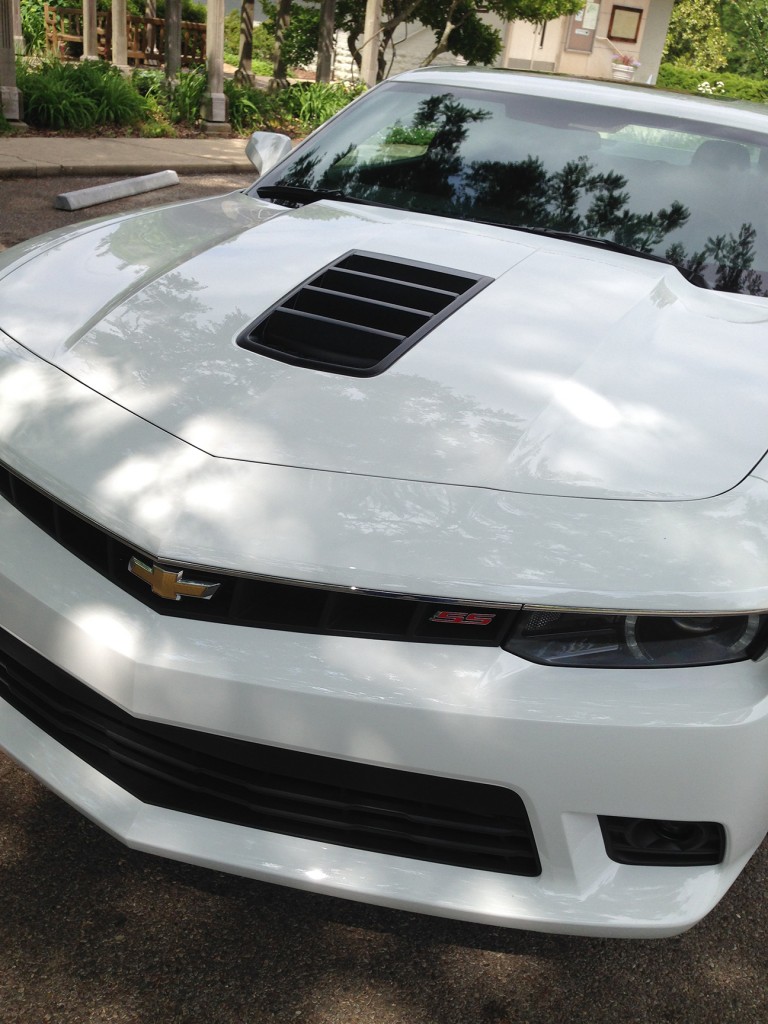 The 2015 Camaro is a muscle car through and through. It is bold, aggressive and a real head turner. Our tester was white, and though that's a safe, bland color, it still managed to stand out on the road, attracting stares, thumbs up and head turns. The Camaro has been around for 40 years and has a large following of fans and enthusiasts. And the 2015 version does not disappoint in this regard. We have seen the other aggressive paint coat offerings for this model including a vibrant orange, a sexy red and a brand new blue velvet paint coat, which is exclusive for the 2015 model year. All muscle cars have low profiles. But the Camaro seems especially squatty. Sometimes this ground clearance can be problematic when maneuvering through suburbia with sloping driveways, speed bumps and concrete parking curbs. But it just wouldn't be a Camaro if it didn't have that low profile. On the grille, the Chevy bowtie is present, but subdued. The entire grille is less aggressive than in years past. However, the Camaro gets excessively aggressive on the hood with stylized lines flanking the hood vent. And unlike other models, this isn't for show, this actually serves a purpose of cooling the engine as it revs high and fast, plus it looks ultra cool. It's what you want from a muscle car. Styling continues on the side panels with chiseled masculine looks. The rear spoiler also shows the Camaro means business as this is a car that actually looks more aggressive from the back, than the front. Halogen head and tail lights add to the overall modern muscle appearance. 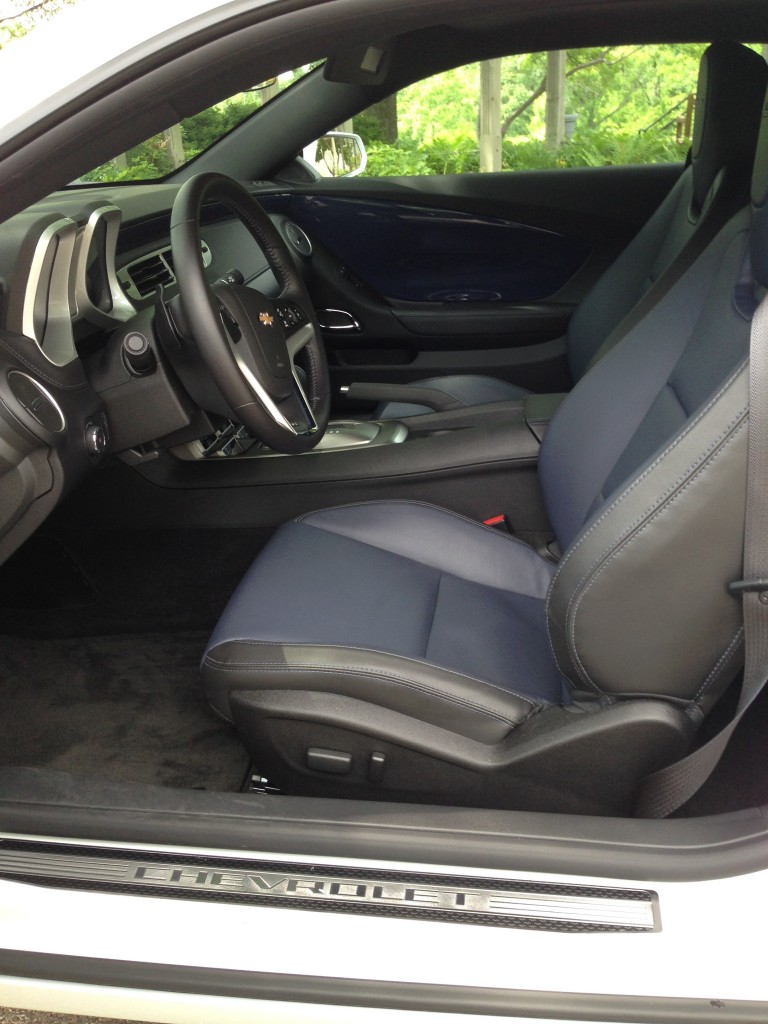 Often times we've found muscle cars to favor the young, with young people's bodies. That is to say, that all too frequently muscle car seats come with uncomfortable racing-style seats that hug and constrict. This is not the case with the Camaro. Our tester had the RS package, which brings with it leather seats that are both stylish, but equally comfortable. The all-black interior fits the overall muscle-car motif of the Camaro, but these special seats have blue accents. That same blue accent is found in the stitching along the dashboard. This is a modern touch not found in every Camaro and offers something truly special, as well as something quite appealing. The organization of the center stack and new 7-inch touchscreen is simple and neat. The angle of the touchscreen is perfect for the driver, and helps keep glare to a minimum. Rear seat room is limited. This is to be expected from almost any coupe and certainly from any muscle car. Rear passengers will be rather cramped for longer trips, and all passengers will want for more headroom. And therein lies the big flaw with the Camaro's interior. Because of the squinty windows, lower roof line and overall muscle-car motif, the Camaro offers limited headroom, even for the driver. Anyone over six feet tall will need to lower the seat to the maximum lowest level and the furthest back or just buy the convertible, where the Camaro stars is probably best suited. We certainly would have appreciated and thoroughly enjoyed our time in the Camaro in a drop top. Instead, a cramped neck muscle was common during our week behind the wheel. 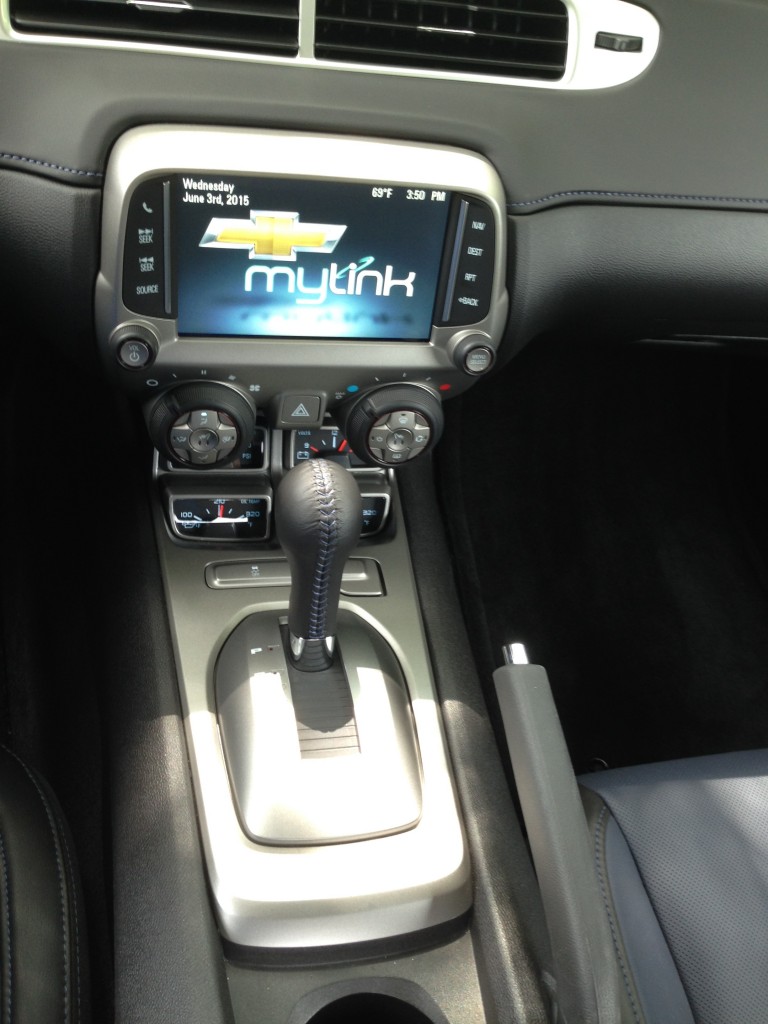 The Camaro isn't glaringly full of technology, but has just enough tech to keep itself current and modern. We're curious as to what technological advances will be available in the 2016 sixth generation Camaro. The 7-inch touchscreen powers Chevy's MyLink system. We find this system to be easy to use. It also offers a wide array of smart phone apps that integrate into it, including music apps and voice text apps. While most carmakers are offering similar apps these days, we like how intuitive this system is and appreciate how well-organized the touchscreen is. This Camaro came with a Head Up display, which shows key information, including speed, in a holographic image right at the driver's sight line. There were three different USB port connections allowing for device connectivity and charging.

One of the alleged coming changes to the next generation Camaro is an increase in fuel economy (thanks to lighter materials). However, the 2015 Camaro with a curb weight of 3,900 pounds, has average fuel economy. The V6 engine has an EPA estimate of 17 city and 28 highway. Our tester was the more powerful V8 engine with an EPA estimate of 15 city and 24 highway. In a week's worth of heavy-footed driving (driving a Camaro any other way is embarrassing), we averaged 18 mpg.

In JD Power's dependability study, the Camaro was the top-ranked model in the midsize sporty car segment and received 4.5 stars out of 5. It received three circles out five from JD Power in overall quality (in the same segment), and the Dodge Challenger was the leader in the segment in that regard.

For a muscle car, the Camaro is quite safe. There is a protective "safety cage" around the entire interior (not really noticeable) that helps absorb crash energy and protect occupants. A rear vision camera is standard on the convertible only. Four-wheel disc brakes with four-channel ABS help slow the Camaro quickly. GM's StabiliTrak system offers a great amount of stability control for the Camaro.

The Camaro has both a V6 engine and a V8 engine. The 3.6-liter V6 engine produces 323 horsepower and 278 lb./ft. of torque. A six-speed manual transmission is standard but an optional six-speed automatic is an option. Our tester was the bigger 6.2-liter V8 engine with 426 horsepower and 420 lb./ft. of torque. The same six-speed transmissions are available, and our tester had the HydraMatic automatic transmission. For such a large engine, the performance is quite tame. This is not so much a negative, but speaks about the controlled and ease of performance from the Camaro. There is still some rumbling of the engine, and burnouts are possible in the rear-wheel drive Camaro, but for a car with 400 plus horses under the hood, it keeps a cool head throughout the driving process. The transmission works well and keeps the revs smooth and loose. Our tester was the SS coupe, which features sporty gearing, athletic suspension and wider wheels. The Camaro's lateral acceleration is impressive and with these options really holds well through tight cornering. The V8 engine is track-ready, but also a car that keeps the power refined enough for highway or suburban driving. If it's a street rod you seek, then the ZL1 trim with the supercharged V8 is the best option as that makes a blazing 580 horsepower.

2015 Camaros can be had for as little as $24,000. Our tester was one of the top trims (of eight total trims). The 2SS coupe has a standard price of $37,305. With the added RS package (highly recommended) and some other accent packages, our tester had a final MSRP of $43,800. We admit this is awfully pricey for an impractical car. But for the Camaro enthusiasts out there, or those looking to compare and contrast to the Dodge Challenger or Ford Mustang, the price is comparable down the line and across the trims. All muscle cars have numerous options and varying levels of pricing from affordable to not so affordable. 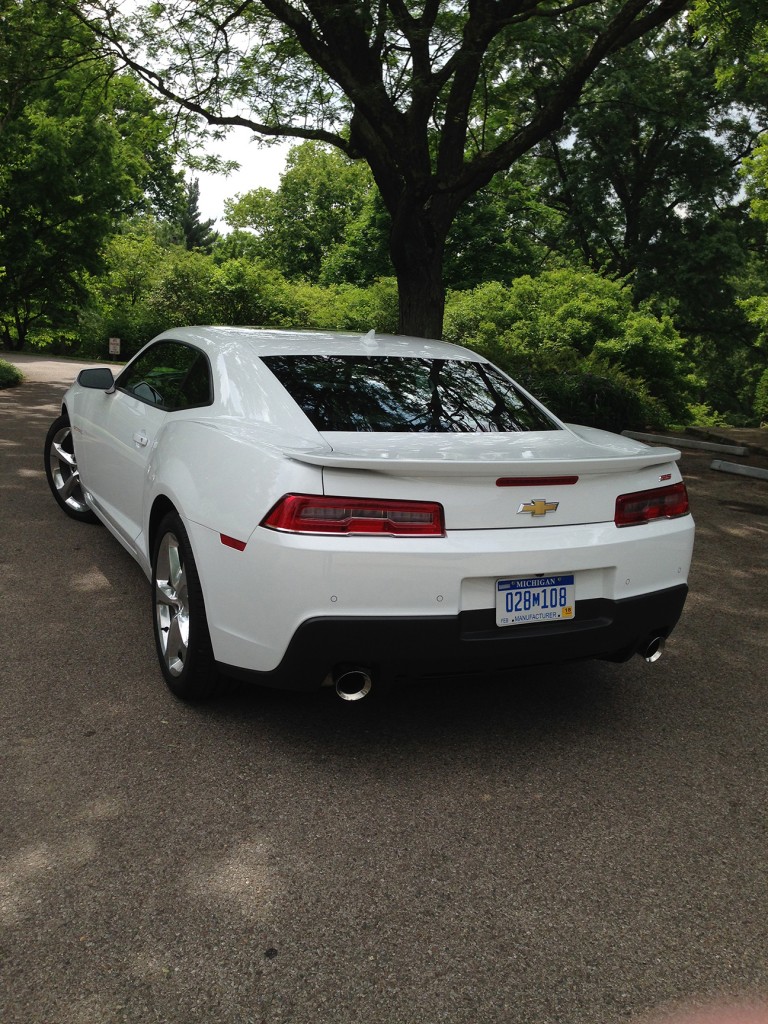 The muscle car segment is where the American icons rev their engines and strut their stuff. This is the segment of the Mustang, Challenger and of course the Camaro, talk about your icons and classics. Differentiating yourself amongst these big three can be difficult. They all epitomize American muscle car engineering at its finest. Big, heavy cars that are fast off the line, and have squatty but aggressive appearances. The Camaro is no exception to this. Is one of these muscle cars better than the other? That's honestly a personal choice (and one that can spark a great debate amongst friends or at a bar), but certainly the 2015 Chevy Camaro is full of American muscle not to mention horsepower. This model year is a great way to go out as the last of the fifth generation and undoubtedly will contribute in numerous ways to the next generation, which is coming in 2016.