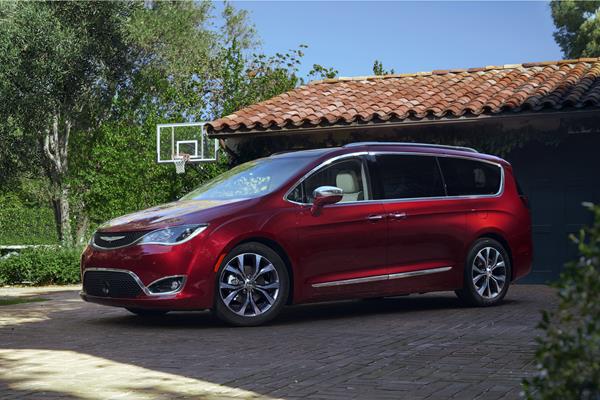 The Chrysler Pacifica was introduced as a new minivan for the market in the 2016 model year and continues to be one of our favorite choices for family hauling. The Pacifica sets bars for the segment that others must strive to meet. The Pacifica is only outsold by its cousin, the Dodge Grand Caravan, and then only because the Grand Caravan is heavily sold to fleets whereas the Pacifica is largely a consumer buy.

The 2019 Chrysler Pacifica carries forward with the excellent design of the van. Its focus is on having a dynamic design, an accommodating interior, and having a broad breadth of convenience and luxury features available throughout its trims.

Our experience with the Pacifica is varied, perhaps more so than with any other minivan on the market. We've driven it, ridden in it, hauled stuff in it, and even squeezed into the third row. All with good results.

For the 2019 model year, nothing changes from the 2018 offering, which added several safety features as standard while upgrading infotainment. In addition, Fiat-Chrysler's Mopar division has added several options for owner upgrades to the Pacifica that aid in those goals as well as personalization and convenience.

The 2019 Chrysler Pacifica is offered as a gasoline model in six trim points and as a plug-in hybrid model (Pacifica Hybrid) in three trims. The Pacifica in all renditions is a three-row minivan with seating for up to seven.


What We Love About the 2019 Chrysler Pacifica:


What We Don't Love About the 2019 Chrysler Pacifica: 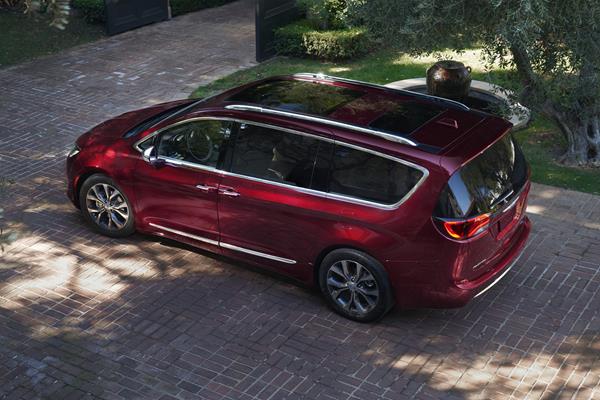 While the minivan segment has gained a reputation for being just small school buses with sliding doors, there's a lot more to them than that. We're at the 35th anniversary of the minivan this year, introduced back in 1984 with the Plymouth Voyager (another Chrysler product). Today, minivans are large people movers, yes, but they're also refined, well-balanced machines which epitomize passenger ergonomics in a way no other vehicle segment can. The 2019 Pacifica exemplifies that aim while adding some style and appeal that's outside of the usual box for the minivan segment.

The sleek profile of the 2019 Chrysler Pacifica is created through careful use of lines creating movement. The roofline of the Pacifica slopes slightly downward while the beltline, body edge, and lower door cuts slope upwards at an opposing angle. The Pacifica's overall stance, despite being flat to the ground, appears tilted forward slightly and this impression is augmented by a slightly larger rear fender and wheel well gap and accentuated by a large rear overhang. The impression is of forward movement and thus sportiness.

This unique appeal for the Pacifica in the minivan segment has good implications for the van. Where others might attempt to be more plain (and thus impart an impression of reliability) or edgier (pushing style), the Pacifica balances both sportiness and premium quality in its look.

Inside, the 2019 Chrysler Pacifica belies the exterior's pinch with extreme roominess. All seating positions enjoy copious amounts of legroom and headroom, through the third row is clearly the least accommodating of the bunch. Even with its lower amounts of room by comparison, however, the third row is better than expected and still adult-usable. Even by large adults, which we've tested multiple times.

The front seating in the 2019 Pacifica is well above par, with extreme comfort through adjustment options and good layout as the basis for their design. There are ergonomic elements such as large storage areas between the front seats perfect for a purse or briefcase, spots for phones, plugs for the same, and bins and hideaways for various gadgets and items. 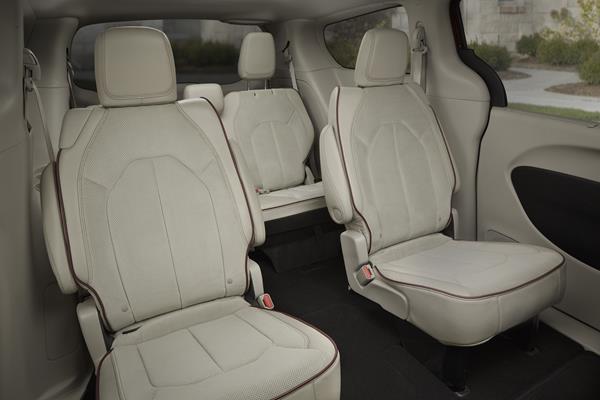 In the second row, which is two captain's chairs with a wide gap between, there are also a lot of ergonomics and comfort to be found. The second-row chairs fold into the floor and tuck away completely when cargo is the focus. Except in the plug-in hybrid model, which uses that space for batteries, switching to allowing the second row to be removed instead. With a sliding door on either side of the van and lots of legroom and adjustment opportunities, the second row also enjoys good storage both at the back of the center bin ahead and in seatback pockets and door pockets as well.

Cargo in the 2019 Chrysler Pacifica is very good. There are 32.3 cubic feet of space behind the third row, including the large bin that opens in the floor when the seats are deployed. Folding the third row down flat into that bing for a flat floor creates 87.5 cubic feet of space behind the second row. Fold all of the rows and a huge 140.5 cubic feet of flat load space are opened up. Enough to accommodate four by eight-foot sheets of plywood or the like flat, between the wheel wells. The low loading height and large rear hatch opening make loading and unloading easy while the side doors slide open to allow even more access for stacking or sliding items into the cargo bay.

With quality materials, a smart layout, and easily-understood controls, the 2019 Chrysler Pacifica has an excellent interior on all fronts. 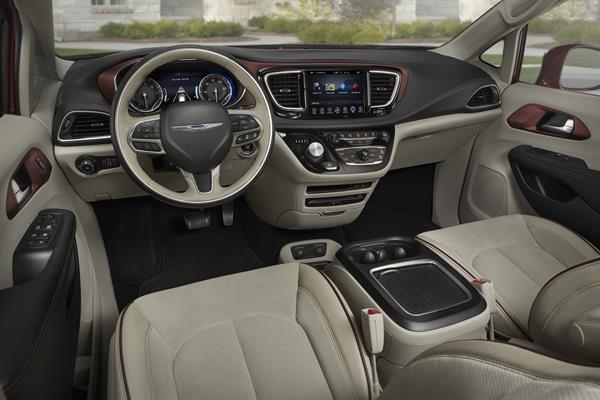 The 2019 Pacifica now includes a 7-inch touchscreen as standard equipment in its base model and moves to an 8.4-inch screen in its trim level and package progression. Chrysler's Uconnect system is one of the best on the market, with a crisp screen readout, easy-to-understand menu system, and fast responses. Hands-free voice controls are very well done as well. Android Auto and Apple CarPlay are standard in the Pacifica.

The larger screen is optional in some trims and standard in both the Touring L Plus and Limited trim points for both the Pacifica and Pacifica Hybrid. Integrated apps access for smartphones and in-vehicle WiFi are also a big part of the updated Uconnect system's appeal.

A rear-seat entertainment system is available in the Pacifica at most trim points, fitting behind the front seat backs with flip-up screens that have several built-in games and apps for kids and adults to have fun with. Mopar also offers a drop-down ceiling-mounted large screen system that drops the apps and focuses on movies and television instead, and at a lower cost. Both systems offer both smart device tethering for streaming as well as USB and HDMI port inputs for entertainment options. Video game systems and the like can be used with either entertainment setup.

The 2019 Chrysler Pacifica is offered in both a gasoline and a plug-in hybrid variant. The Pacifica is EPA-rated at 18 mpg in the city and 28 mpg on the highway. In the real world, those expected numbers are similar to reality as we achieved a 23 mpg overall return in a week's worth of daily driving last year.

This year, we drove the Pacifica Hybrid, which is EPA-rated at 84 MPG-equivalent between its electric system and gasoline fuel economy. The plug-in Pacifica has an expected 33-mile range per charge, mostly in-town, and we averaged about 27 miles per charge in our driving. The 22 mpg combined rating of the gasoline model is mirrored in the Pacifica Hybrid otherwise, when running in gas-electric hybrid mode. We saw an average of about 40 mpg overall in our week with the PHEV Pacifica if starting out with a full charge.

Both fuel economy returns are excellent for the segment.

The 2019 Chrysler Pacifica is rated as "About Average" for this year's J.D. Power and Associates Vehicle Dependability Study. That lowers it from its "Better Than Most" rating of last year, but there are still no recalls for the Pacifica, showing that the company seems to have worked out most of the minivan's kinks. 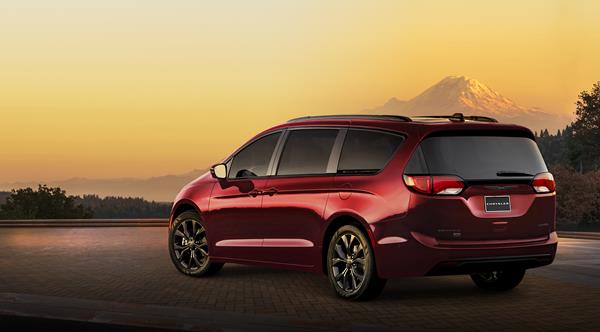 The 2019 Pacifica has had a full suite of crash testing from both testing bodies. The National Highway Traffic Safety Administration (NHTSA) has given the 2019 Chrysler Pacifica a full 5-Star safety rating based on five star results from both its frontal and side crash tests. Rollover tests resulted in a four-star return.

The Insurance Institute for Highway Safety (IIHS) has given the 2019 Pacifica a top rating of "Good" on all but one of its crash tests. As well as a "Superior" rating for its front crash test prevention systems. Thecrash test not receiving a "Good" rating was the small overlap front passenger test, which saw the Pacifica being given a second-best "Acceptable" rating.

The 2019 Chrysler Pacifica is listed as a Top Safety Pick by the IIHS.

In both the 2019 Chrysler Pacifica and the 2019 Pacifica Hybrid, power is derived from a 3.6-liter V6 engine. In the gasoline-only model, that engine produces 287 horsepower and utilizes a nine-speed automatic transmission in front-wheel drive. In the Hybrid model, the engine produces slightly less output and couples to electric motors and a continuously variable transmission (CVT) for a total output of 260 horsepower. The hybrid model makes up for its fewer horses with better torque delivery thanks to the electric propulsion and a better body dynamic with its lower-slung weight thanks to the batteries being placed under the floor midships.

The 2019 Pacifica is generally a good drive, with responsive results in most driving situations. Neither the gasoline nor the hybrid offer fast-paced sportiness, of course, but both feel confident in almost every daily driving scenario. Freeway speeds and passes are doable with the Pacifica without a lot of fuss and downshifts for better power delivery are generally forthcoming when the throttle is pressed.

The transmission is often hesitant, however, when left to its own devices at some speeds. In the 30-40 mph range, for example, it will sometimes hunt for the right gear to balance fuel economy and get-go.

On the road, the 2019 Chrysler Pacifica offers a good feel with responsive steering and a smaller-than-it-is dynamic. A tight turning radius, unusual for a minivan, and excellent maneuverability mean that parking and getting through tight spaces is easier in the Pacific than it is in most of the minivan's rivals. Including many crossovers. The Pacifica is also unusually quiet and well-balanced at highway speeds.

The 2019 Chrysler Pacifica has, among the three-row options on the market, a good amount of versatility and ergonomic usefulness for the money being spent. The family hauler offers a lot for the growing family on the go. We recommend looking past the lower-level trims and considering the Touring L model for its excellent value in the mid-tier. Going to the Plus adds more, but at a steep cost, with many of those add-ons being available ala carte for the Touring L.

If efficiency is also a concern and a lot of city-based (in-town) driving is your norm, then the plug-in hybrid Pacifica Hybrid (especially in the Touring Plus) might be a good choice. The hybrid premium pays off relatively quickly after the government tax incentives and high fuel economy are calculated. Many might find that the premium is paid for within a couple of years of purchase. 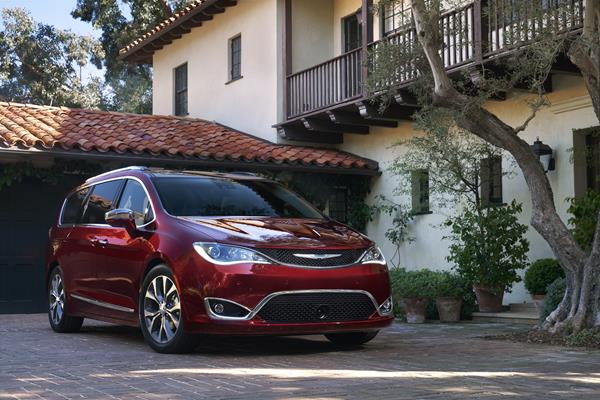 The chief competitors for the Chrysler Pacifica are other minivans that include the Honda Odyssey, the Kia Sedona, the Dodge Grand Caravan, and the Toyota Sienna. As mentioned earlier, the Grand Caravan is the best-seller on the market, but largely due to fleet sales at the lower end rather than for consumer preference. The Grand Caravan is aged and outdated on most fronts, but still a contender for its excellent interior space and capabilities. The Odyssey and Sedona are relatively new and very competitive with the Pacifica, but lack the refinement and attention to ergonomics that the Chrysler carries. The Toyota Sienna is also getting aged and outdated by comparison and has a clunky infotainment interface and odd look at the curb, but the Sienna is the only offering in the segment with all-wheel drive. The Pacifica is the only minivan with a plug-in hybrid option.

The 2019 Chrysler Pacifica is our top choice in minivans and has been so since its introduction three years ago. The Pacifica has set benchmarks for style in the minivan segment and for ergonomics in both the minivan and three-row crossover-SUV segments. The efficiency of both the regular and hybrid model are also very high points.