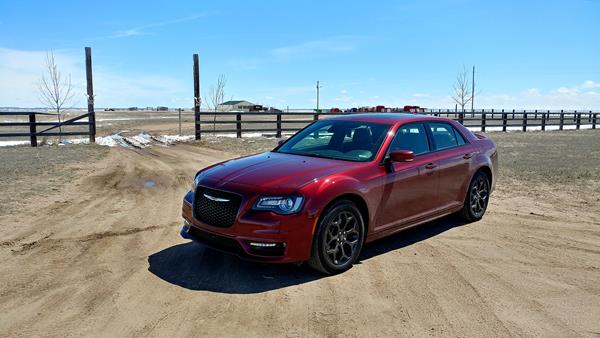 There is something purely American about a big sedan with a rumbling engine and a bold, Al Capone look. The Chrysler 300 embodies that and as such is truly the last of the truly American-styled sedans. A sort of throwback to the heyday of Detroit when huge slabs of stamped metal and interiors the size of European condominiums were the norm.

The 2019 Chrysler 300 embodies all of that, but has a very modern flair with a lot of excellence that others in the market, even if they were competing, would find tough to beat. The 300 is one of the quietest rides on the road, has a confident feel to its drive quality, and has luxury-levels of comfort. It also sports one of the most advanced and well-done infotainment systems in automotive--whatever the market.

There are some downsides to a big, heavy, wide-bodied sedan like the 300, but these are part and parcel to the expectations one should have for the car.

The 2019 Chrysler 300 comes in four trim levels, seats five, and has both a V6 and a V8 engine available. Drivetrains include rear-wheel and all-wheel drive. Plus a truly "Jersey three-body" trunk. 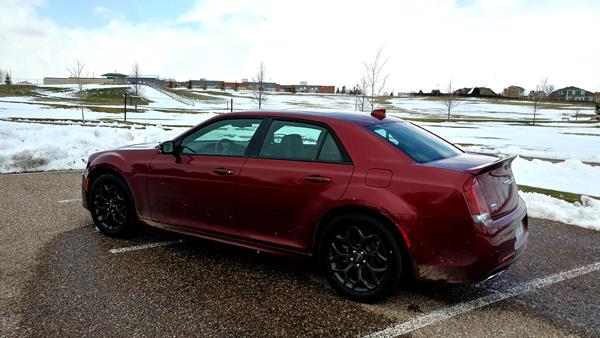 The Chrysler 300 has a strong exterior design that combines sleek luxury driving, American style, with sinister muscle. The result is what has become an iconic appearance that is unmatched in the marketplace. Most of the 300's contemporaries aim for a fluid, sleek, upscale look. Not so the Chrysler 300, which aims instead for a combination of American muscle and Americanized elegance. It's a unique and very well-done design.

The 2019 Chrysler 300 continues the second-generation of the car's design, now in its eighth year. Where the interior and technologies have kept up with the times, Chrysler saw little need to change the exterior of the 300 much. We agree. It's a timeless slice of Americana in automotive.

The design begins with the throwback nose of the Chrysler 300, which combines the original 1960s model's headlamp and grille weight balance and flat fascia. The bumper is deemphasized below with an air scoop taking up much of its visual space while the large slotted grille dominates, flanked by heavy headlamps for balance. The hood of the 300 curves slightly towards its middle, running straight into the windscreen with engine intake lines for emphasis.

The straight greenhouse line and beltline are mirrored by a straight cut in the lower door bodywork for a running board. This line follows the apex of the hood and ends at the trunk where an integrated, but separate-appearing, spoiler finishes. The rear bumper is pushed out a bit for an angled rear end, aiding the slight bulge at the haunches to promise rear-wheel driven muscle. A thick rear pillar makes for a fastback-style look without impeding into the rear deck, keeping the sedan design intact while adding sport and speed.

The overall look is further enhanced by well-placed wheels and tight rubber-to-well for the 2019 Chrysler 300. 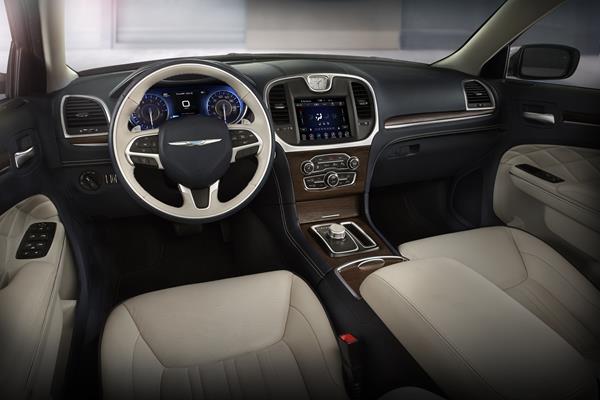 As a brand, Chrysler generally aims for upscale as a more premium marque than would be found at its Dodge sibling. The interior of the 2019 300 definitely showcases that, being filled with roominess, quality materials, and oodles of comfort. The big sedan isn't just bulky on the outside, it's cavernous on the inside as well. This formula, a throwback to the blissful days of American automotive past, is pure.

Most everything about the 2019 Chrysler 300 is aimed towards comfort. It's easy to get into and out of the 300, thanks to wide-swinging doors and a tall roofline. The bolsters in the seat, while sporty, are also forgiving and easy to get used to. They're soft, not stiff, allowing easy adjustment once someone sits in them.

Finding a comfortable seating position in the front seats of the 2019 300 is easy, thanks to the plentiful adjustment capabilities offered. Even lower trim levels have lots of options there. In the back seats, the spread is wide and the middle seat accommodation is some of the best we've seen--even counting large SUVs and crossovers. Three across, even with full-sized adults, is more than doable in the Chrysler 300. It's comfortable.

Our chief complaint about the Chrysler 300's interior is the lack of rear visibility for the driver. This can be mitigated somewhat with proper adjustment of the side mirrors, but the small rear window and large pillars are definite eye-blockers.

Outside of that single complaint, we have no issues with the excellence of the Chrysler 300's interior design and comfort levels. This is a big, quiet, cushy, and comfortable machine on most any road and for just about any length of drive.

The 2019 Chrysler 300 has the latest Uconnect system for infotainment. The system includes a larger touchscreen as standard equipment as well as Apple CarPlay and Android Auto. Plus Bluetooth and two USB ports.

Uconnect is one of the best systems on the market and offers both physical and virtual buttons for easy menu navigation. The screen is fast to respond and includes crisp graphics with a no-nonsense approach that isn't too minimalized. Navigation is optional on the Chrysler 300, as are most driver's aids such as all-around parking sensors (rear parking is standard), blind-spot monitoring, lane departure, and cross-traffic alert.

The 2019 Chrysler 300 has a few engine and powertrain options. The standard V6 is EPA rated at 19 mpg in the city and 30 mpg on the highway--good numbers for a sedan this large. Adding the optional all-wheel-drive powertrain offered in some trim levels reduces fuel economy to 17 city and 29 highway.

The bigger V8 engine option is EPA rated at 16 mpg in the city and 25 mpg on the highway. 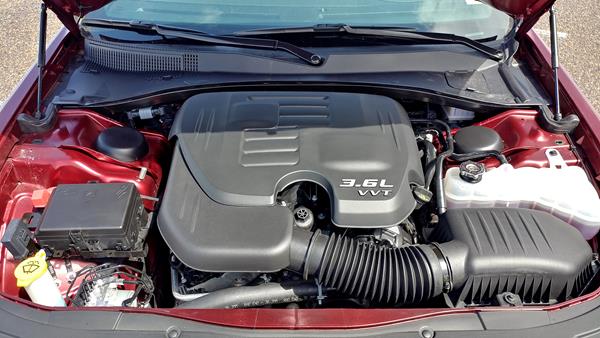 The 2019 Chrysler 300 ranks better than some might expect when it comes to reliability. The J.D. Power and Associates Vehicle Dependability Study puts the 300 at "Better Than Most" for expected reliability. The car is well-vetted for this generation and, as of this writing, has had no recalls issued.

The 2019 Chrysler 300 is a big sedan, but that does not guarantee safety ratings. The National Highway Transportation Safety Administration (NHTSA) has given the Chrysler 300 a four-star overall rating (out of five stars) for safety, including four stars each for frontal and rollover results and five stars for side crash test results.

The Insurance Institute for Highway Safety (IIHS) has given the 2019 Chrysler 300 top scores of "Good" on most tests, with the exception of the small overlap front driver-side test results, which resulted in a next-best "Acceptable." Chrysler 300 models equipped with optional collision mitigation systems received a Superior score on that IIHS test.

Whatever engine is chosen, the 2019 Chrysler 300 is a powerful machine with good performance. The 3.6-liter V6 is tuned to produce 292 horsepower to the rear wheels. The 300S model raises that output to 300 horses while the big 5.7-liter V8 Hemi engine gives 363 hp. All versions of the Chrysler 300 are rear-wheel drive by default with all-wheel drive as an option in some V6-equipped models.

The Chrysler 300 is not a performance sedan, however, and while it does have confidence and a good grumble when pressed, it isn't as quick as most performance-oriented rivals can be. That suits the Chrysler's design, however, which is much more refined than that of the more speed-driven offerings under the Dodge nameplate.

On the road, the 2019 300 is quiet, handles comfortably, and feels like the smooth gliding sedan it should be. This is American cruising as it used to be: big and floaty.

The 2019 Chrysler 300 is not a low-cost vehicle, with a starting price equivalent to most midsized crossover-SUVs and pickup trucks. The 300 is the only large sedan still offered on the market as a non-luxury option, however, but is still premium in its build.

Most buyers will find themselves happy in the Touring models, priced in the low $30,000s, with their added comfort amenities and driver aids.

Resale values for the Chrysler 300 are about average for the class, though comparables are disappearing quickly. 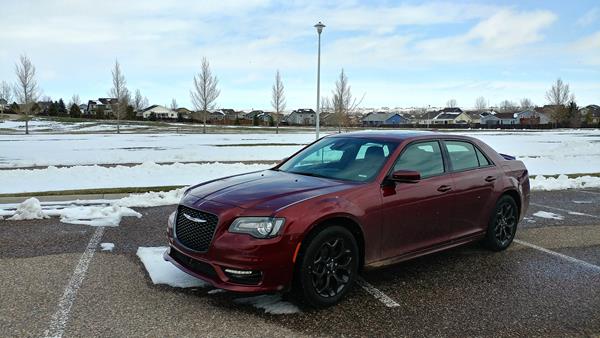 The only truly comparable sedan on the market for the 2019 Chrysler 300 is the Chevrolet Impala, which is in its last year in North America. The Impala is a strong contender, though, and should be cross-compared carefully. There are lower-cost versions of the Impala that will lack the refinement of the 300, but when comparing apples-to-apples options packages, the Chrysler 300 will dazzle with its big style and extremely comfortable interior.

Also comparable is the very similar Dodge Charger, which is on the same platform as the Chrysler 300 and sold as a lower cost option comparatively. As such, the amenities and comforts of the Charger are lower than those of the 300 and the Charger's styling is more muscular and performance-oriented as well.

As it is, the 2019 Chrysler 300 remains the only truly big American sedan left on the market as a throwback to the golden years of land yacht-based luxury motoring. Yet the 300 manages to do it with modern equipment and refinement, keeping pace with the times without losing sight of yesteryear.

The 2019 Chrysler 300 is big, comfortable, and statement-making. As it should be.

Comparison of 2019 Chrysler 300 with Similar Cars