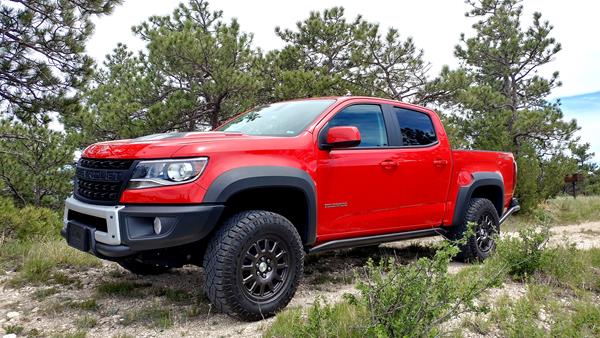 The Colorado is Chevrolet's midsize truck, aiming towards a market that's grown quickly over the past few years. The small truck segment, long dominated by Toyota, has seen a resurgence and the Colorado (along with its GMC twin, the Canyon) has is a big part of that renewed interest. As far as midsize pickup trucks go, the Colorado is a solid entry in a busy market. It's capable, well-designed, and affordable for most buyers.

The Chevrolet Colorado, reintroduced in 2015, has seen a few minor changes since then. For the 2019 model year, the Colorado gets more standard equipment, more options, and a hardcore off-road variant in the ZR2 Bison.

The 2019 Chevrolet Colorado features two cab styles, two bed lengths, three engine choices (including a diesel) and five trim levels. Most of the trim levels can be upgraded with packages of options to suit the buyer.


What We Love About the 2019 Chevrolet Colorado:


What We Don't Love About the 2019 Chevrolet Colorado: 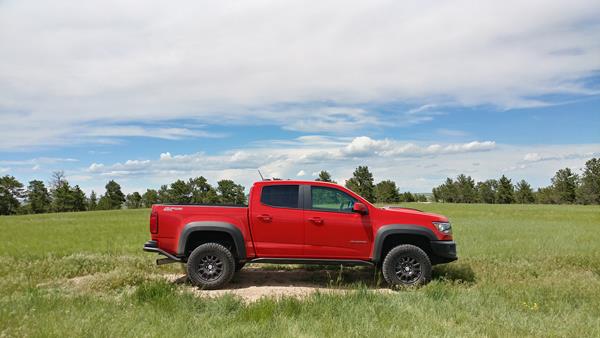 The 2019 Colorado has a plain, but functional and robust look about it. A few details, such as the upward-sweeping rear glass, the slight curve to the roofline, and the less bulky front fascia make the Colorado appear sporty. Strong truck elements, however, dominate the Chevrolet Colorado's overall design.

These are based loosely on the larger Silverado, but with less square-on-square in the motif. Wheel wells and fender bulges, for example, are less pronounced and more curved than they are on the Colorado's larger sibling. Bumpers are less bulky and more smooth as well. The headlamps are more car or SUV-like in design, but the Colorado retains the flat hood and flat underbody clearance of most trucks.

Even in its base trim, the 2019 Colorado has a work-ready appearance while the upper-level trims add more bling. Getting to the ZR2 off-road package, the Colorado becomes very muscular in appearance with higher ground clearance, more aggressive tires, pronounced off-road protective gear, and aggressive approach and departure angles.

The interior of the 2019 Chevrolet Colorado has vastly different experiences for base model buyers versus higher-end upgrades. Some similarities are the norm, though, including the extensive use of somewhat cheap plastics throughout. Even with those cheap-feeling plastics, it should be said, the Colorado has a better interior experience than most of its rivals.

Comfort and ergonomics in the Colorado are excellent, especially for average-sized people. Larger people may have trouble with headroom or legroom in this pickup truck, but no more so than in rival midsize offerings. The modern design of the Colorado is unmatched in the segment, with a more contemporary car-truck mix of design elements than that found in most others. Especially in seating and driver controls. 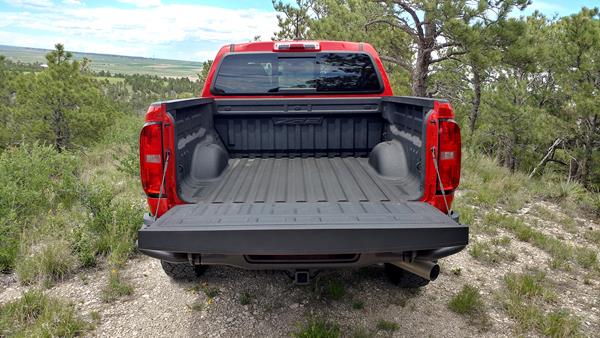 The Colorado comes standard with a power-adjustable driver's seat and cloth upholstery. In our minds, upgrades to this basic setup are only icing as the cake is already cooked well to start with here. Parents will be interested in the child safety seat options in the rear seats, which include two LATCH-ready anchor positions. They are not easy to access, however, and require some shoving to get the safety seat into place. For those using overhead tethers instead, well.. Good luck finding where to anchor them. The three anchors are stuffed behind the seating and difficult to reach reliably.

The relatively plain cabin design for the 2019 Colorado makes finding controls and utilizing the space easy. Storage in the cabin could be better, with not a lot of places for gadgets, small items, or gear storage. The back seats, even in the largest crew cab option, don't accommodate much storage underneath at all.

A nice touch are the large knobs, well-placed buttons, and other physical controls for comfort and convenience items in the Colorado. Someone wearing gloves, for example, can easily access the climate controls and volume knob without trouble.

Chevrolet includes the MyLink infotainment interface as standard in the 2019 Colorado. This makes Apple CarPlay and Android Auto standard features, alongside Bluetooth and two USB ports. The 7-inch touchscreen is a nice size for the truck and features crisp output. MyLink has a great interface that's easy to understand and use with a short learning curve for basic accessibility.

The upgrade to the base infotainment comes with an 8-inch touchscreen, a WiFi hotspot, high-def radio, satellite radio, wireless phone charging, navigation, and optional Chevrolet apps like Marketplace. Other upgrades to tech can include a high-definition rear parking camera (versus the standard one), and numerous driver aids and safety techs.

Chevrolet's MyLink has become one of the most useful and easily-used inftainment systems on the market.

The 2019 Chevrolet Colorado has three engine choices and can be had in either rear-wheel drive or four-wheel drive. Each powertrain and drivetrain choice affects fuel economy for the pickup truck.

The base engine is a four-cylinder with either a six-speed manual or a six-speed automatic transmission. It's highest rating is an EPA-estimated 20 mpg in the city and 26 mpg on the highway, which are good numbers for the class.

The upgrade V6 engine comes with an eight-speed automatic. Fuel economy doesn't go down too much for the uptick in capability at an EPA-rated 18 mpg city and 25 mpg highway.

A turbodiesel option is also available for the 2019 Colorado. A six-speed automatic is the only transmission option for the diesel and offers excellent fuel efficiency at 20 mpg in the city and 30 mpg on the highway. In our week-long test of this engine in a ZR2 Bison package Colorado, we averaged 22 mpg overall. That included a lot of off-road in 4WD, we'll note, and the ZR2 Bison adds a lot of weight in extra gear to the truck. There's little reason to doubt the EPA's estimates for a more standard-equipped Colorado with this Duramax diesel option. 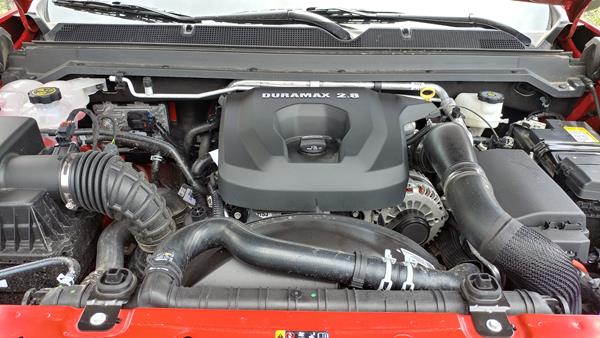 The 2019 Colorado has been rated by the J.D. Power and Associates Vehicle Dependability Study as "About Average." There have been no recalls for the truck (as of this writing) and Chevrolet's basic warranty is about par for the class.

Both the National Highway Traffic Safety Administration (NHTSA) and the Insurance Institute for Highway Safety (IIHS) have rated the 2019 Chevrolet Colorado as basically average for safety in crash testing.

The NHTSA gives the 2019 Colorado four stars overall (out of five), with four stars for frontal crash tests, five stars for side crash results, and only three stars for rollovers.

The IIHS has given the Colorado top scores of "Good" for most crash testing, but reduced scores of "Marginal" for small overlap front passenger crash tests and "Basic" for frontal crash prevention systems.

The 2019 Chevrolet Colorado has three engine choices and either rear-wheel or four-wheel drive for its powertrain. The base engine in the Colorado is a 2.5-liter four-cylinder that outputs 200 horsepower. A six-speed manual transmission is standard and six-speed automatic can be opted for with this engine. As a daily option, this is a good engine, but it lacks the umph and capability of the other engine choices for towing (3,500 pounds) and hauling. This smaller engine is also far less confident.

The upgrade gasoline engine is a 3.6-liter V6 that pairs to an eight-speed automatic. This improves everything about the truck, offering up to 7,000 pounds of towing without losing much in fuel economy.

The other engine option is a more than capable 2.8-liter Duramax turbodiesel. This 186-horsepower diesel outputs lots of torque (369 lb-ft of it) to a six-speed automatic transmission. This boosts towing to 7,700 pounds and improves fuel economy as well.

We drove the diesel engine in the new ZR2 Bison package for the Colorado. This extreme off-road rig with that excellent engine pairing makes for a beastly get-anywhere truck. The ZR2 has class-exclusive front and rear locking differentials, plenty of approach and departure clearance, and a solid, confident feel about it on or off the roadway. 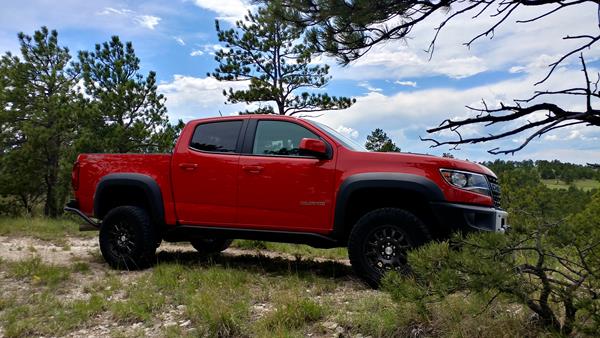 Most of the value in the Colorado will come with packaging the truck to meet needs and desires for the buyer. The base WT (Work Truck) model will not appeal to many, but the well-packaged LT trim will appeal to most needs. We'd recommend starting there.

The Colorado is competitively priced for the segment across its trim line, but getting into the cool ZR2 trim is not inexpensive. It's worth shopping through the line, however, and price-comparing with the other trucks in the segment before making a decision.

There are several options in the midsize pickup truck segment now. The best-selling Toyota Tacoma continues to rule the roost, but the Colorado is strong competition against it with less polarizing looks and a more comfortable interior. The new Ford Ranger is more crossover-like in its appeal, offering less capability but a lot more comfort and ease of drive quality. Similarly, the crossover-based Honda Ridgeline offers maximum ergonomics. The tough little Nissan Frontier is a workaday, rough-and-tumble truck that's fallen far behind in terms of modernization. Finally, the almost identical GMC Canyon is worth cross-shopping against the Colorado.

The 2019 Chevrolet Colorado is a great daily truck. It offers a good mix of capability, comfort, and style for most buyers. The varied trim levels, strong option lineup, and interior comfort are high points for the Colorado.