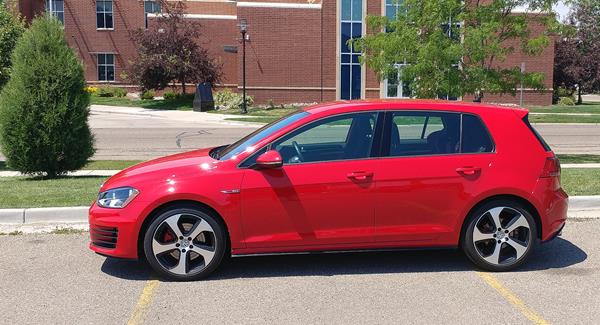 The Hot Hatch car category is a vaguely defined arena in which some manufactures compete and others merely dabble. For most, the Volkswagen Golf GTI is the benchmark against which all other hot hatch cars are weighed. For 2017, VW kept the winning formula that the Golf GTI has had and added a few standard features to some trim points. It's otherwise unchanged from the 2016 model year.

Most who loosely define what constitutes a hot hatch versus other compact hatchbacks will point to performance metrics and handling characteristics. These items are also what differentiate the Volkswagen Golf from the Golf GTI. The GTI model has a larger displacement engine, better running gear for superior handling, and several performance-enhancing and visually engaging exterior elements.

The 2017 VW Golf GTI otherwise retains all of the sensibilities and versatile usefulness of the Golf upon which it's based. Which is a good thing. This is a Volkswagen that performs well, has plenty of driving fun, gets reasonable fuel economy and remains practical for everyday use, including parking in tight spaces and maneuvering in urban environs.

One disappointing change to some is the discontinuation of the two-door models for all of the 2017 Golf lineup, including the Golf GTI.


What We Love About the 2017 Volkswagen Golf GTI:


What We Don't Love About the 2017 Volkswagen Golf GTI: 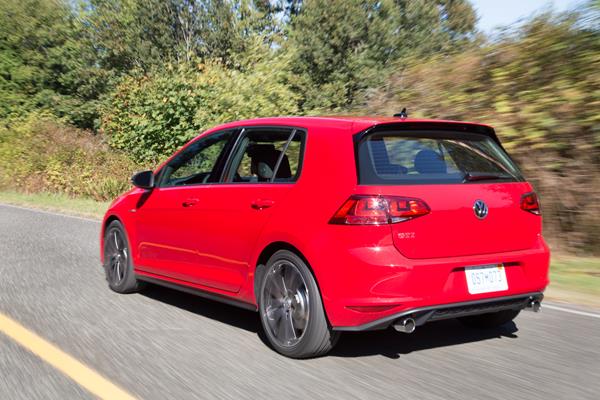 The 2017 Volkswagen Golf GTI shares most of its looks with the rest of the Golf family. It's a no-nonsense, sleek five-door hatchback with a ready stance and a casual design. Differentiating the GTI from the standard Golf are the GTI badges, performance coloring for the grille, brakes and edges, and the more aggressive air dams and performance tire options.

We like the Golf's overall style compared to other, more wagon-like hatchbacks on the market. It's uniquely Volkswagen and promises roominess for the interior as well.

The 2017 Golf GTI features an interior almost identical to all other Golf models. That means it's roomy, larger than expected and versatile. Quality materials and good workmanship are found throughout the cabin, which is also an unusual trait in the oft-chintzy compact segments.

Entry and egress are good with the front doors opening wide and high. The rear doors are a bit smaller but swing well out for plenty of access. The door sills could be lower for easier access, but are relatively thin, making the step-in easier. 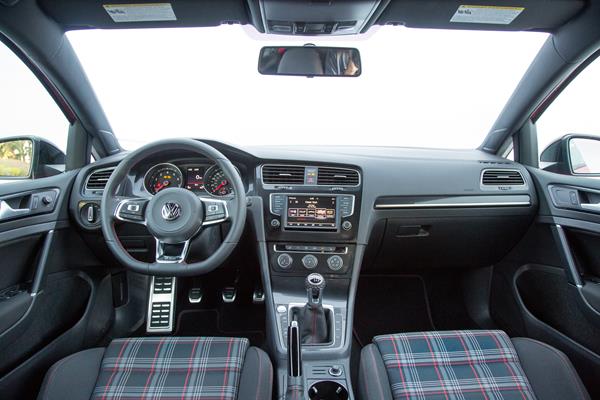 The GTI model features seating with more sporty bolstering than normal, which is a good thing. Front seats are roomy, supportive and well-done with plenty of adjustability. Headroom is excellent in the Golf GTI, and thigh and shoulder room are also above par. We especially like the upscale cloth seating for its wonderful feel and appeal.

The rear seats in the 2017 Golf GTI are compact as expected, but roomy enough for most adults and with plenty of space for children in booster chairs. Legroom is the only thing taller adults will miss back there, with headroom and shoulder room being very good. The split-fold rear seats also have a pass-through from the cargo space, an unusual find in the compact segments.

Cargo is good at 22.8 cubic feet with the rear seats up and 52.7 with them folded down. We note that the rear seats don't fold completely flat, but close enough that most will have no reason to complain. Access to the cargo area is wide and tall, thanks to the GTI's big hatch.

The 2017 Golf GTI has a 6.5-inch infotainment display that is about right-sized for the car, though it does have a somewhat grainy rearview camera view. The infotainment includes Apple CarPlay and Android Auto, as well as Bluetooth connectivity and Car-Net App-Connect for smartphone integration. This is a lot of tech for an entry-level car and we applaud VW for it.

Given that, we'd like to see a more intuitive user interface than the command-knob menu system that the Volkswagen Golf GTI employs. Using it is distracting when on the go, and turning the knob at the bottom of the screen isn't terribly ergonomic. We do like that two smartphones can be paired to the infotainment simultaneously.

We also like that upper trims have adaptive cruise control, collision warning and other useful driver aids. 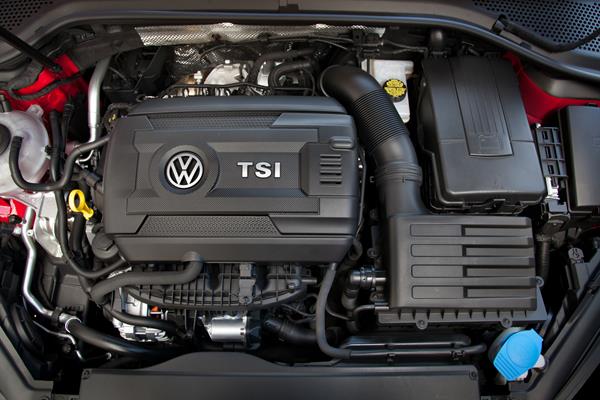 The 2017 Golf GTI is EPA-rated at 24 mpg in the city and 34 mpg on the highway. In the real world, we nearly matched those numbers with a 31 mpg average after a week's worth of driving. That's commendable, as it rarely happens at our high altitude over 5,400 feet.

The 2017 VW Golf GTI is rated as "About Average" by the J.D. Power and Associates Vehicle Dependability Study. There have been no recalls for the GTI, which aids its scoring here, but the Golf's overall history of being only just about average for dependability means that we cannot score the GTI any higher than we have.

The 2017 Volkswagen Golf GTI benefits from the excellent build of its Golf underpinnings and thus receives high marks for safety. The 2017 GTI is rated by the National Highway Traffic Safety ADministration (NHTSA) with a 5-Star overall rating with four stars each for frontal crash and rollover and five stars for side crash tests.

The Insurance Institute for Highway Safety similarly gives the Golf GTI top scores of "Good" across all of its crash tests. Thus the 2017 Golf GTI is an IIHS Top Safety Pick. 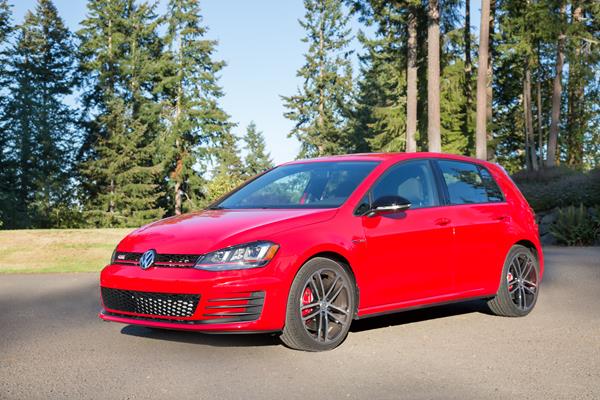 The 2017 Volkswagen Golf GTI has a 2.0-liter 4-cylinder engine that's turbocharged to 210 horsepower at its base level and 220 horses at all other trim points. A 6-speed manual transmission and front-wheel drive are standard. A 6-speed dual-clutch automatic transmission is available and highly recommended.

The manual transmission is a great choice for serious performance hounds, but those buyers are most likely going to be looking at the even more performance-oriented Golf R rather than at the Golf GTI. The GTI is more for those who love to drive but don't need to beat everyone out of the light and who don't generally hit the track on the weekends. With that, the more daily usable and very well-done dual-clutch automatic is probably more fitting.

That transmission does shift very well and isn't afraid to drop down a gear to push the 2017 Golf GTI towards RPM limits when asked to. Manual shifting via paddles or the gear knob are also possible when desired. This can make downshifts even more dynamic.

Where the GTI really sells itself is on a twisting road or stretch of highway. At speed, the Golf GTI corners wonderfully and has a lot of presence about its chassis that translates into a confident feel when pushing speed limits and turns. It's a thoroughly enjoyable car to drive, whether alone or with friends and family in tow.

The 2017 Volkswagen Golf GTI has a relatively high price point when compared to other compacts at the entry level, but that is commensurate with the sport-oriented compacts against which it should be compared. Sales for the GTI are steady and have been for some time, though the Golf upon which it's based often sees fluctuation. Because of those steady sales, finding a lot of cash on the hood for a good upfront deal is not as likely with the GTI.

Offsetting these factors is the desirability of the VW Golf GTI, which means resale is generally higher than would otherwise be found in the compact segments. 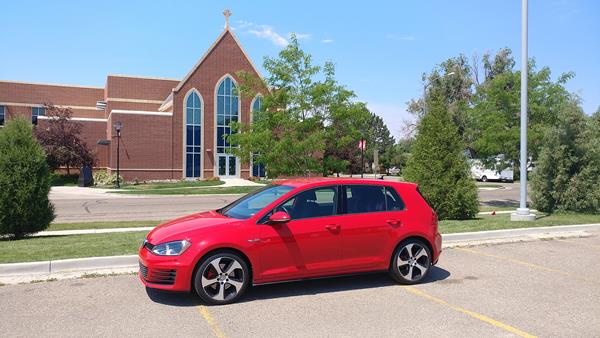 The hot hatch category has grown since the GTI defined it years ago. The most competitive options against the 2017 Volkswagen Golf GTI are the Subaru WRX, Ford Focus ST and BMW MINI Hatchback. The WRX is more performance-centric with standard all-wheel drive and a less forgiving ride, but has less practicality than the GTI. The Focus ST is more wagon-like in its design and carries a similar bearing in sportiness overall. The MINI is a bit heavier to drive but has a lot of British appeal in its style and fun.

In the end, the 2017 VW Golf GTI still defines the hot hatch category and continues to offer the best balance of everyday use and sport driving. Outside of those who need serious performance, the GTI fits most fun-oriented drivers who want a bit of zing to their everyday commute and aren't afraid to occasional push the limits through a curve or when passing. We like the Golf GTI for its fun-filled nature that doesn't impede its daily-use practicality.