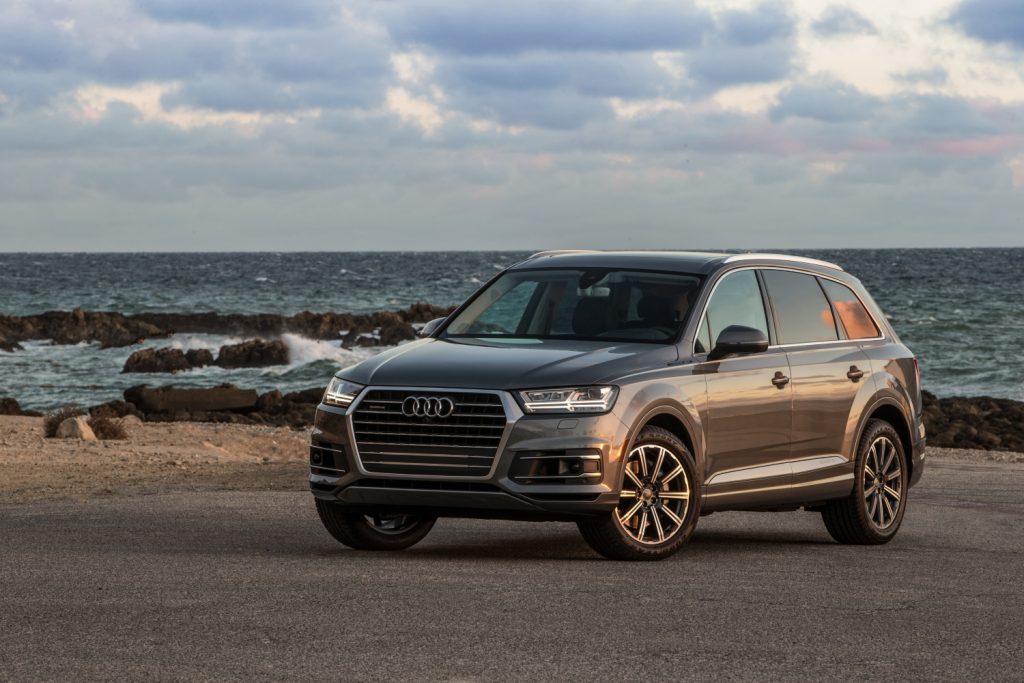 The 2017 Audi Q7 is a fully redesigned version of a popular luxury crossover. Sitting in the three-row segment, this new Q7 is a great blend of German excellence and American family needs. The Q7 offers an excellent blend of versatility, comfort and fun driving.

The changes to the Q7 are numerous and all for the better. Two engine options top those updates, including a turbocharged 4-cylinder and a powerful supercharged six. All-wheel drive is standard and a host of safety and driver's aid technologies are also standard or on offer.

We like the simple Germanic look that the Q7 sports and the faster pace its design and drive dynamic offer. Families will appreciate the ease of use for the back seating and the occasional-use third row when children bring friends. Cargo in the Q7 is a bit limited, but usable for the most part.

The Q7 hits top ratings for safety and offers great fuel economy to go with its sporty drive appeal. This is definitely not just another boring family machine. 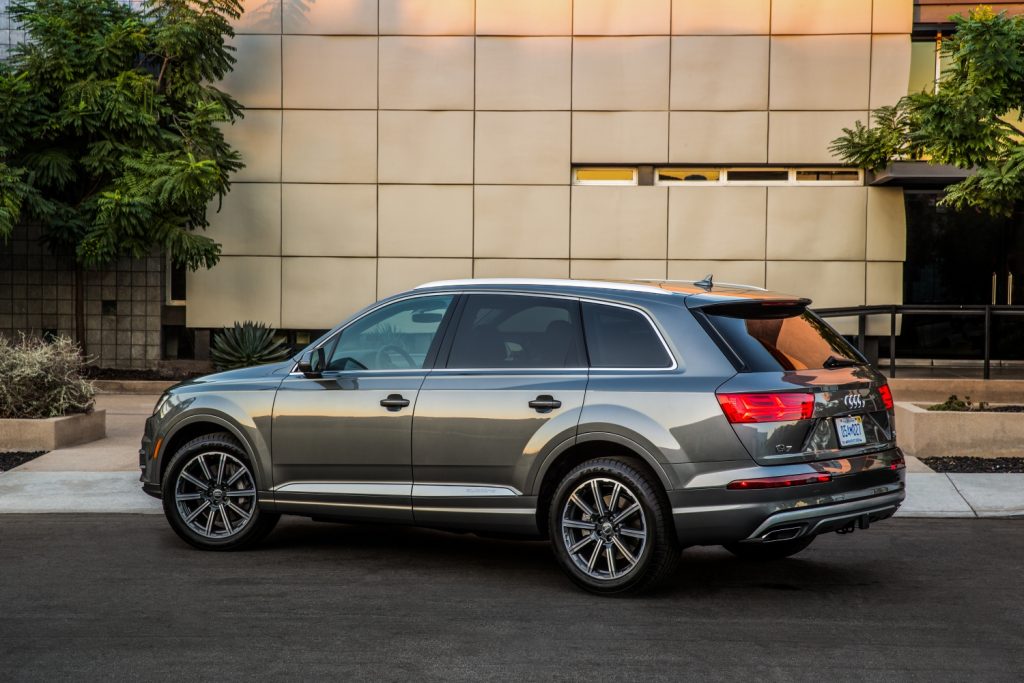 In the luxury crossover segments, looking family friendly without looking like a minivan is the name of the game. The 2017 Audi Q7 exemplifies this with some Germanic simplicity to its look that is both sophisticated and sporty without being plain.

A very Audi grille up front is tall and wide, with thin chrome lines running horizontally across. At top-center is the three-hoop Audi symbol and to either side are rectangular headlamps running back to the fender.

The windscreen is raked sharply and the greenhouse on the Q7 narrows towards the rear. Blackened pillars open the glass and plain, but stylish bodywork adorns the doors. The roofline slopes rearward a bit, accentuated by the narrowing glass below, and the wheels are pushed to the corners for a more dramatic, sporty feel. The rear hatch has a rounded, aerodynamic design to keep the theme running.

The 2017 Q7 has a great look overall that works well with the signature Audi grays and whites usually found on vehicles from this make. 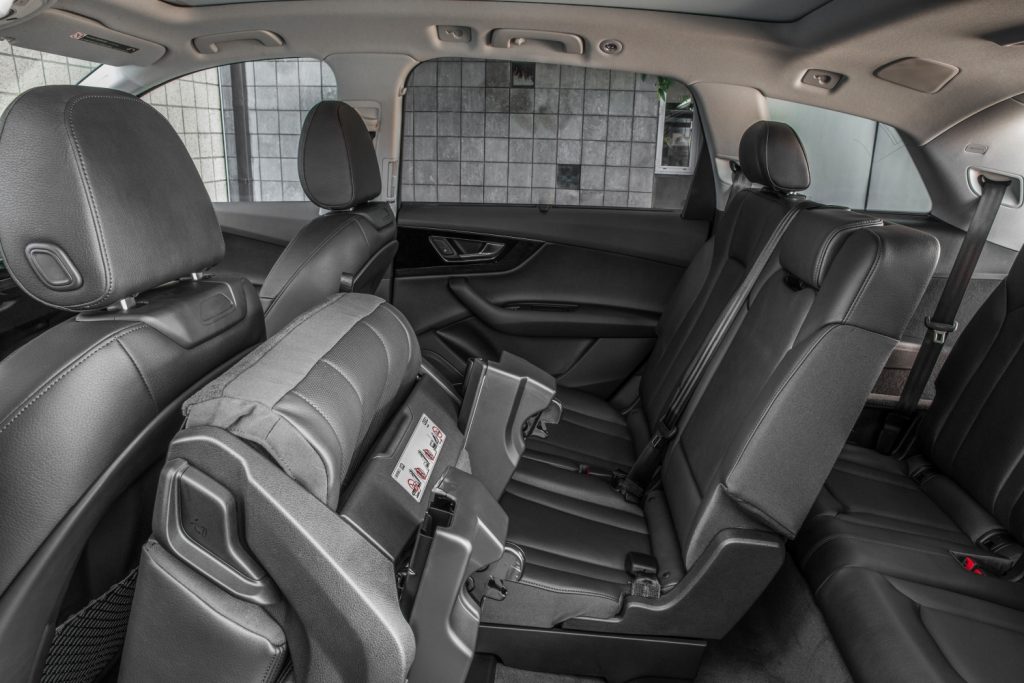 The 2017 Audi Q7 has an elegantly designed interior with comfortable seating and quality materials throughout. It feels like a luxury vehicle in the European sense, yet carries some definite ergonomics bonuses that will appeal to Americans. Child safety restraints, for example, are easy to install in the second row of the Q7 and the third row, though cramped for all but children in booster seats, is easy to access and does well for those children it's aimed at.

Up front, the driver and front passenger will find themselves ensconced in excellent seats with good bolstering that isn't overly aggressive. The driver's layout is well done with easy access to controls and a full suite of adjustments available on even the base model Q7.

Cargo space is a little limited in the Audi, with just 14.8 cubic feet behind the third row and 37.5 cubes with the third row folded down. That's small for the segment, but the cargo space is very usable with a wide-opening rear hatch and nice squared opening. The hands-free tailgate option (wave a foot under the bumper) is nice and works very well compared to some others we've seen it offered with. 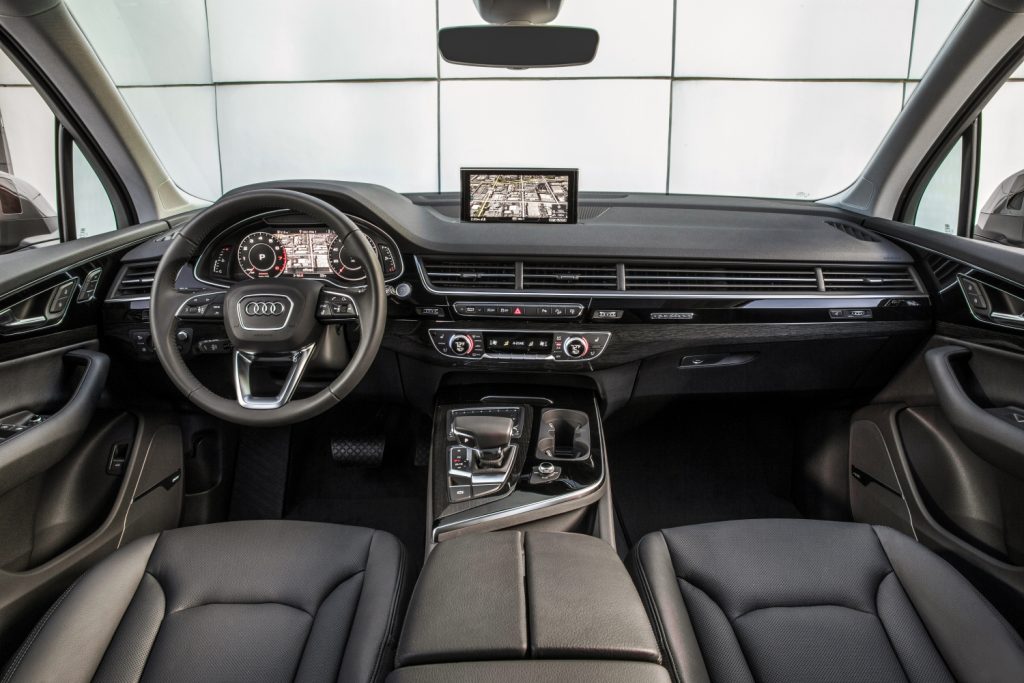 There is a lot of technology offered in the 2017 Q7, but some things about the interface are a bit odd. The controller, for example, is positioned ahead of the gearshift, which is wide and meant to act as a wrist rest when the infotainment is in use. This can make using the MMI knob awkward if the user's hands are small or the driver's seat is pulled back to accommodate long legs. On upgraded infotainment systems, the control knob is augmented by a touchpad just ahead of it - definitely out of reach for most users, requiring a lean forward.

The learning curve for the new Audi infotainment interface is a bit steep, but well worth it once mastered. A 7-inch display comes standard and the upgrade boosts that to 8.3 inches. This may seem small, but it's mounted front-center on the dash and lowers out of the way when not in use. The screen is crisp and easy to read for multiple angles and menus respond quickly.

Functionality is great in the 2017 Q7's infotainment, and pairing a smartphone or looking for an address are easy. The menus are intuitive and fairly easy to navigate, but advanced settings for driver's aids and higher-end audio control may require some hunting and figuring out.

The infotainment is very well done in the Audi Q7. The rear seat entertainment package is also nicely done, with big clear screens and good reception for the wireless headphones included.

There are two engine options for the 2017 Q7, both turbocharged. The 4-cylinder offers 20 mpg in the city and 25 mpg on the highway, according to the EPA. Our time in this model with AWD got close to that with a 21 mpg average overall.

The 6-cylinder is EPA-rated at 19 mpg city and 25 mpg on the highway. These numbers are close enough to the 4-cylinder that buyers who upgrade will not lose much in fuel economy.

It being the Q7's first year as a new model, there are bound to be some reliability issues. The 2017 Audi Q7 has been rated as "About Average" by the J.D. Power and Associates Vehicle Dependability Study. Normally this would not be a serious knock against the vehicle, but we had to further downgrade its reliability score because there have been five safety recalls associated with the Q7 since its launch.

Those recalls include two for airbags, one for steering, one for the second row seating assembly and one for software. That's a lot of relatively major recalls for a vehicle, even one that's new. 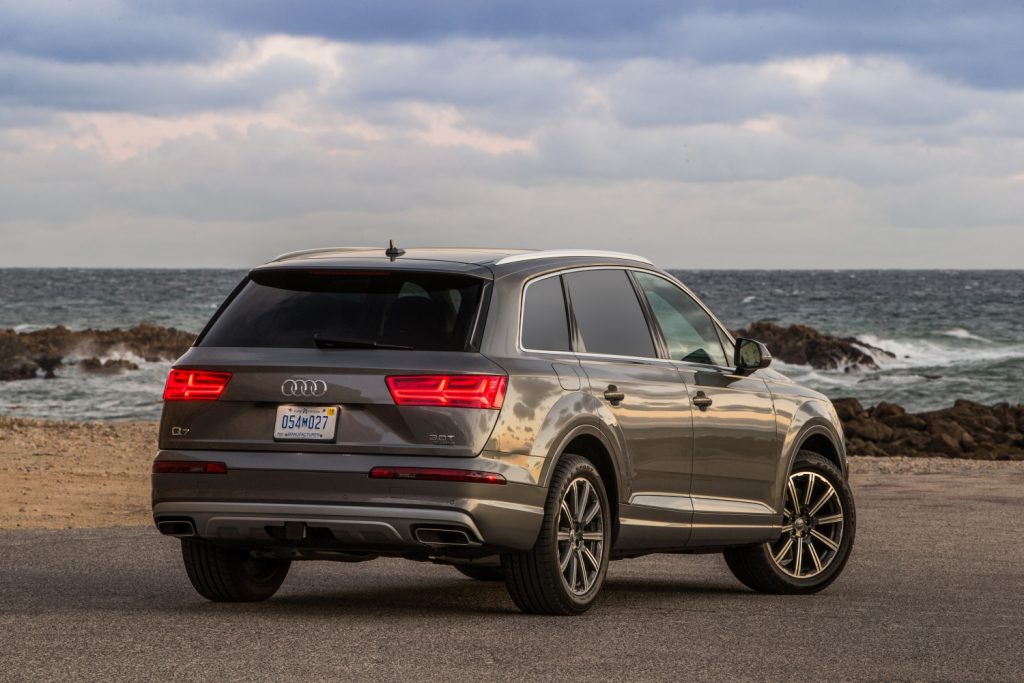 The safety ratings and technologies in the 2017 Audi Q7 are as good as it gets in today's market. The National Highway Traffic Safety Administration (NHTSA) has not crash-rated the Q7 for this year, but the Insurance Institute for Highway Safety (IIHS) has. The Q7's IIHS scores are perfect, with a set of best-available "Good" results across the crash test list. The 2017 Q7 is rated as a "Top Safety Pick+" by the IIHS, its top honor.

The Q7 is a sizable crossover, but is relatively lightweight for its bulk. When powered by the new 2.0-liter 4-cylinder, the turbos give the engine more than enough power to move the Q7 around nicely. The 2.0 outputs 252 horsepower and 273 foot pounds of torque.

Those wanting more power will gravitate to the supercharged V6 option, which displaces three liters. The 3.0L puts out an impressive 333 hp and 325 lb-ft. Towing with this engine is rated at up to 7,700 pounds, when equipped.

The 2017 Audi Q7 comes standard with an 8-speed automatic transmission and all-wheel drive, no matter the engine choice. This transmission shifts quietly and seamlessly and both engines are quiet and unobtrusive except when pressed into fast action.

Handling in the Q7 is nimble and fast-paced, but not so hard with sport that it's not comfortable as well. Maneuverability is excellent, especially with the good visibility the Q7's design allows, and the added driver aids are a nice bonus. The Q7 is definitely one of the sportier crossovers in the luxury segment.

Value is rather subjective in the luxury segments, but with a high starting price some may think that the 2017 Q7 is not a good option. That might seem so on paper, but sales figures show that it's one of a very few in the luxury crossover segment that's seeing a sales gain for 2017. The base price in the Q7 is high, but it comes with a lot of things included and that entry level is far lower than some competitors and is only just slightly above the class average. 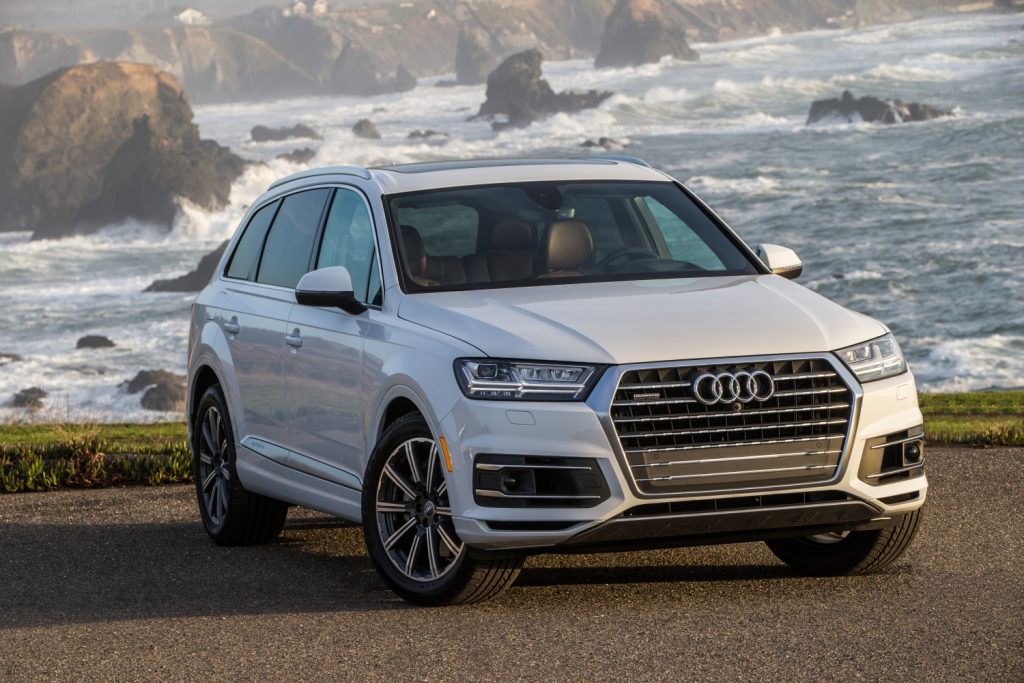 Most buyers will likely find themselves in the $55,000 area when buying the 2017 Q7, but it will be very well equipped for that. The lower-cost 4-cylinder options are a good buy and should retain value well, but the supercharged V6 will definitely hold value better despite its significantly higher price point. We recommend the Premium or Premium Plus packages for their good mix of pricing and amenities, and the big V6 with its higher resale value.

The luxury three-row crossover segment is rife with competition for the all-new Q7. The Porsche Cayenne is far spendier than the Q7, but is also much sportier and has a surprisingly efficient hybrid option. The BMW X5 is also solid competition for the Audi and has a great plug-in hybrid as well. The Lexus RX 350 is a good choice (again, with a hybrid option), but doesn't fare well against the Audi Q7 in terms of usability and performance. For those wanting a pure plug-in option, the Tesla Model X also competes with the Q7, though we note that battery-electrics do have some big downsides for some buyers.

In all, though, the 2017 Audi Q7 is an excellent luxury crossover that offers a lot of versatility and usefulness in a beautiful package that is fun to drive. It's a top pick in the luxury crossover segment and well worth putting on the short list of options.