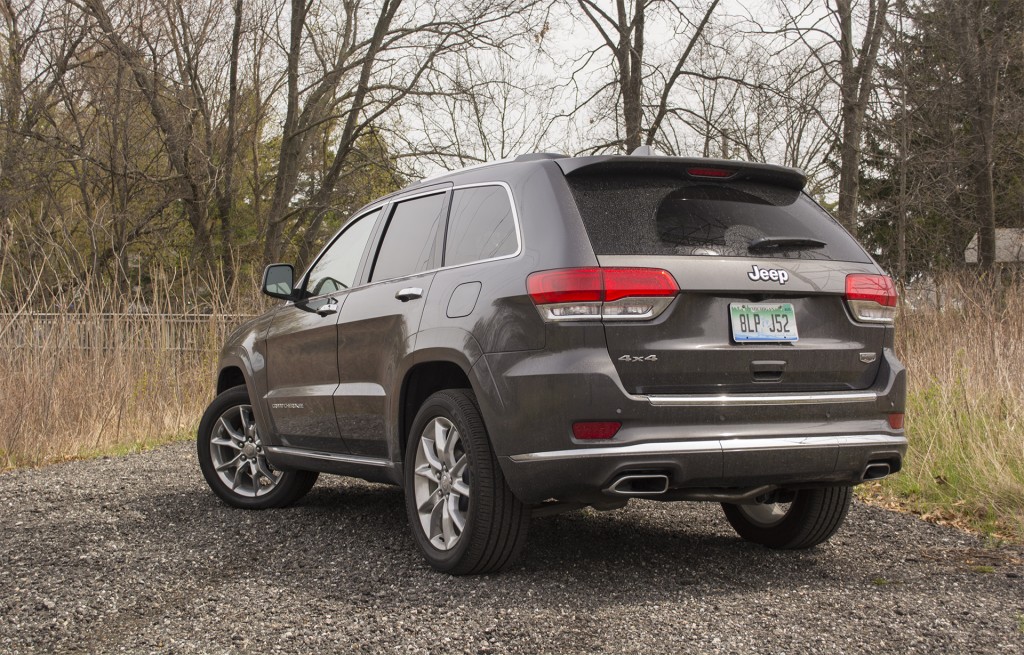 In terms of iconic Jeep models, the Wrangler would be on top. This would be followed by the Cherokee and then the Grand Cherokee. Introduced back in 1993, the Grand Cherokee has served as the brand's flagship and challenger to the world's best. The results of this have been mixed. The Grand Cherokee did quite a good job when it came to the rough stuff and featured some handsome looks. But the interior and powertrains left some people desiring more.

But two years ago, Jeep introduced a heavily revised Grand Cherokee lineup with major changes to the interior, powertrain, and overall refinement. Could it be that Jeep has finally a true challenger to the world's best?


What We Love About the Jeep Grand Cherokee


What We Didn't Love About the Jeep Grand Cherokee 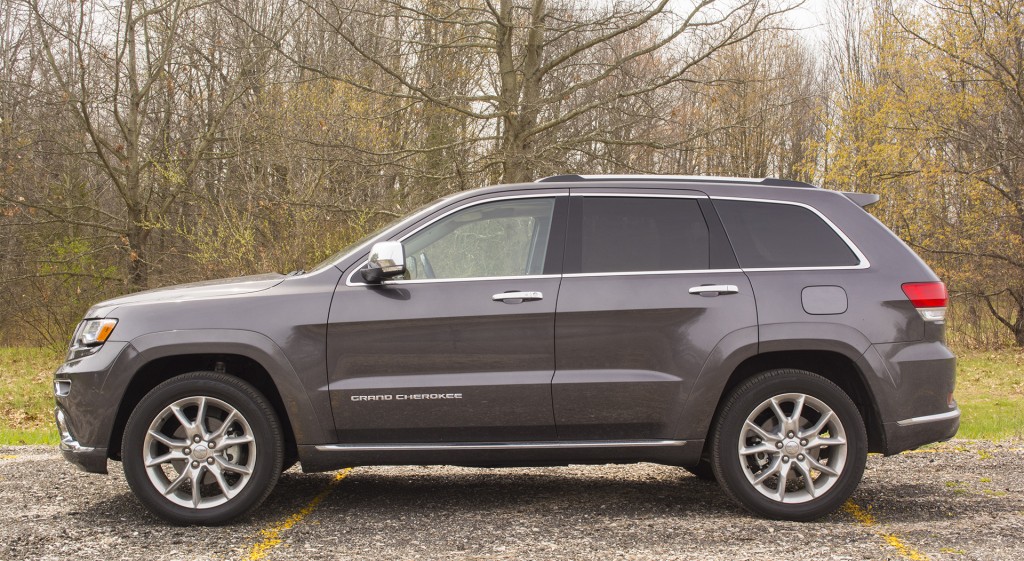 The more things change, the more they stay the same. This is possibly the best way to describe the Grand Cherokee's exterior. The overall shape of the first-generation Grand Cherokee exists, but Jeep's designers made sure the current model has its own design DNA. The front end features the iconic seven-slot grille with chrome trim running along each slot. Headlights are slim and feature LED daytime running lights. One item that Jeep should be commended for is how each trim level has their own design touches to provide some differentiation. Case in point is our Summit tester that features chrome trim on the front and rear bumpers, and door handles. There is also a set of twenty-inch wheels. 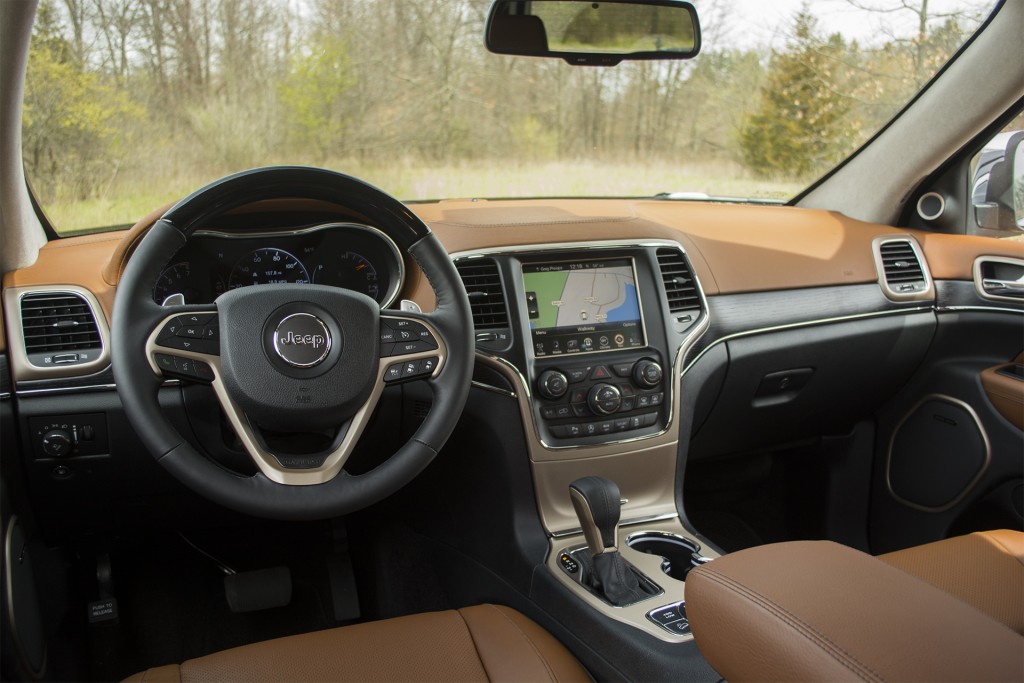 It is hard not to be impressed with the Grand Cherokee's interior. Jeep has put a lot of work of improving the design for better ergonomics and using higher quality materials. Slip behind the wheel and you'll note wood trim running along the dash and part of the steering wheel, along with a dash that matches the color of the seats. The only item that may disappoint some is the center stack with a large touchscreen for the UConnect system. It looks slight out of place when compared to the rest of the dash. The upside to the center stack design is a simple layout. Also, Jeep has swapped the weird joystick controller for the transmission for a regular lever. This change should make it easier for you to realize that the vehicle is indeed in park.

Seats come wrapped in a brown leather that looks scrumptious. Both the driver and passenger get eight-way power-adjustable seats, along with heat and ventilation. Pair this with a power tilt-telescoping wheel and memory function for the driver, and you'll be able to find a comfortable position. The seats themselves provide the right balance of comfort and support. In the back, there is plenty of head and legroom for most passengers. The Summit trim gives rear seat passengers heat and USB inputs for charging devices. Cargo space measures 36.3 cubic feet with rear seats up and 68.3 cubic feet with them folded. 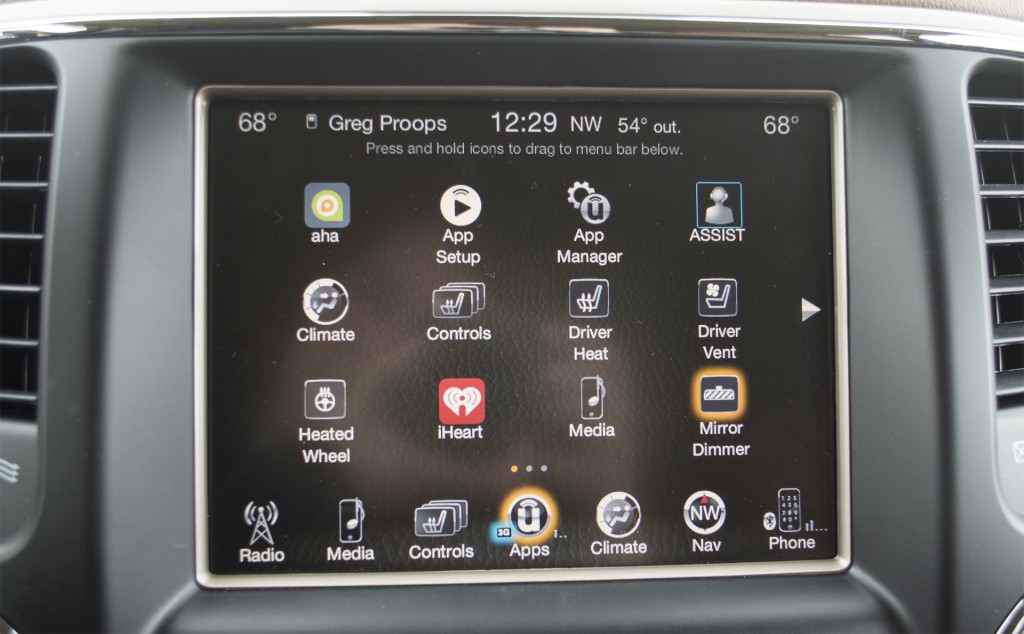 Standard on the Laredo, Laredo E, and Limited is a 5-inch touchscreen, while the Overland, Summit, and SRT get an 8.4-inch touchscreen as standard. You can get it as an option on the Laredo E and Limited. Both systems feature FCA's UConnect system which has earned praise for being one of the easier systems to use. The interface is simple and features large touch buttons to perform actions or move to the various functions on offer. Jeep has added new features to the system such as a WiFi hotspot and integration with various smartphone applications. We do have a minor complaint. UConnect is starting to look somewhat dated when compared to competitor's infotainment systems.

Our Grand Cherokee Summit was fitted with the base 3.6L V6. Paired with four-wheel drive, the model will return 18 City/25 Highway/21 Combined. We saw an average of 19 MPG for the week in mostly city driving. 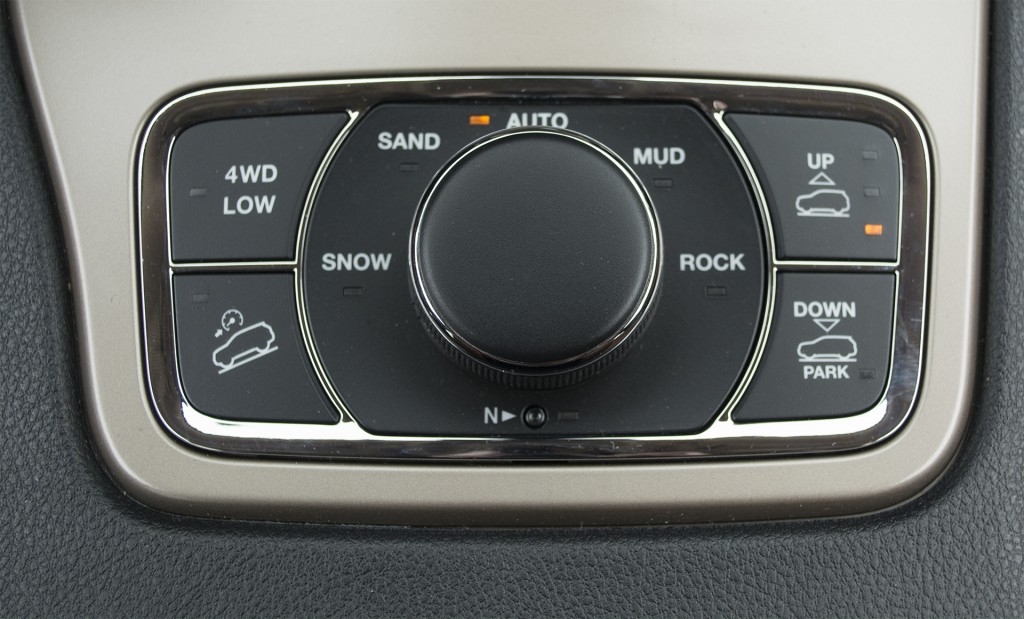 If there is one weak spot of the Grand Cherokee, it would have to reliability. Both Consumer Reports and J.D. Power give the Grand Cherokee a below average rating. The big problem areas deal with the optional 3.0L EcoDiesel V6 engine's fuel system and various electronics such as the HVAC system.

The National Highway Traffic Safety Administration gives the Grand Cherokee a four-star overall rating, while the Insurance Institute for Highway Safety gives the model their rating of ‘Good' in most of their tests. The only place where the Grand Cherokee didn't do so well is in the Small Overlap Front Test where it earned a ‘Marginal' rating. Standard on all models is a full suite of airbags, anti-lock brakes, stability control, and traction control. Limited and models above get a backup camera and rear parking sensors as standard. Optional on higher trims and standard on the Summit is the Advanced Technology Group that adds blind spot monitoring, rear-cross traffic alert, and front-collision mitigation with automatic braking. 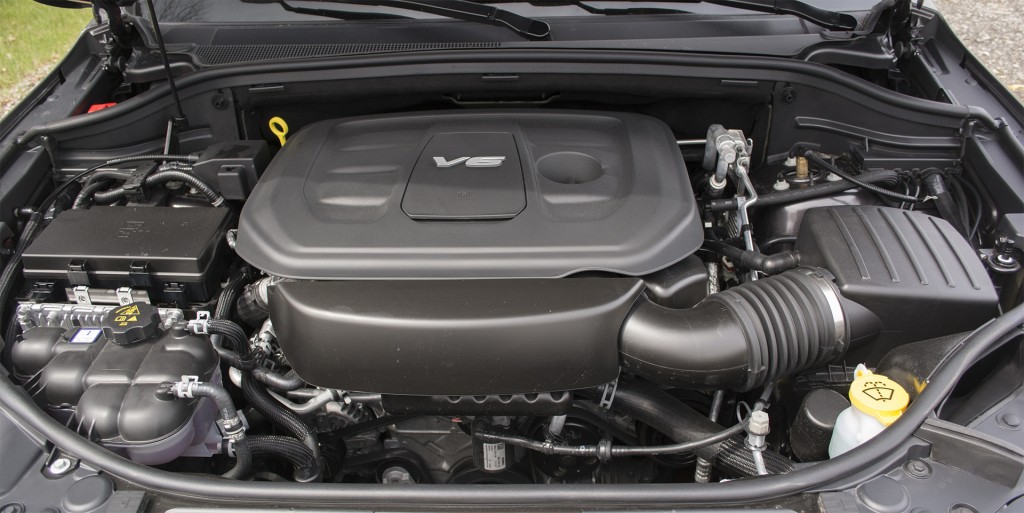 Rear-wheel drive comes standard and there is the choice of three different four-wheel drive systems. On the base Laredo, there is the Quadra-Trac I system that uses a single-speed transfer case and a fixed, 50/50 front-to-rear torque split. Limited and higher trims utilize Quadra-Trac II that uses a two-speed transfer case. This allows the four-wheel drive system to have low-range, along with hill descent control and Terrain Select - a system that can vary the setting of various components of the four-wheel drive system for specific terrains. Finally, there is Quadra-Drive which comes on V8 models. This features an electronic limited-slip rear differential and Selec-Speed - a low-speed cruise control system for off-road driving.

The 3.6L V6 is the best engine for most people as it offers the best balance of performance and efficiency. Leaving a stop is no issue as the V6 gets up to speed at a decent rate. However, the weakness of the powertrain comes into play when making a pass. Stab the accelerator pedal and there is no response for a few seconds until the transmission downshifts, allowing the engine to provide the extra speed needed. It also doesn't feel quite as fast in these situations due to our tester's curb weight of 4,955 pounds. The eight-speed automatic is smooth and provides quick upshifts. As we mentioned, downshifts could be slightly quicker.

We can report the air suspension does provide a mostly smooth ride over some of the roughest roads on offer in the Metro Detroit area. Wind noise is kept to a whisper. We wished the same could be said for the road and tire noise as there was a fair amount coming into the cabin. The cause as we found out was our Grand Cherokee tester was wearing a set of low-rolling resistance tires and not off-road ones. Handling feels secure with little body roll and steering provide decent heft when turning. 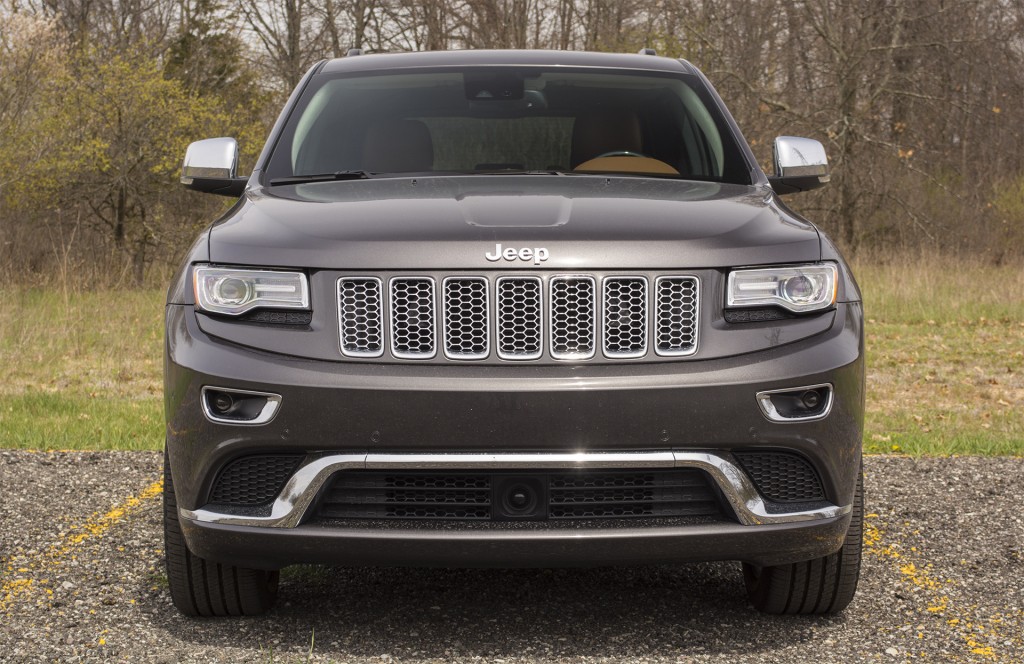 The Jeep Grand Cherokee lineup starts $29,995 for the base Laredo two-wheel drive model and climbs to $65,695 for the SRT. Our Summit four-wheel drive tester came with a base price of $52,595. Equipped with the brown leather, the as-tested price came to $54,085. For that price, you are getting a lot of equipment such as the air suspension, adaptive cruise control, keyless entry and start, heated and ventilated front seats, panoramic sunroof, power liftgate, and much more. But for most people, the trim we would recommend is the Limited as it provides the best balance of features and price.

As for engines, stick with the V6 if you are planning not tow. If you are, we would lean towards the V8 over the diesel because of the reliability issues. 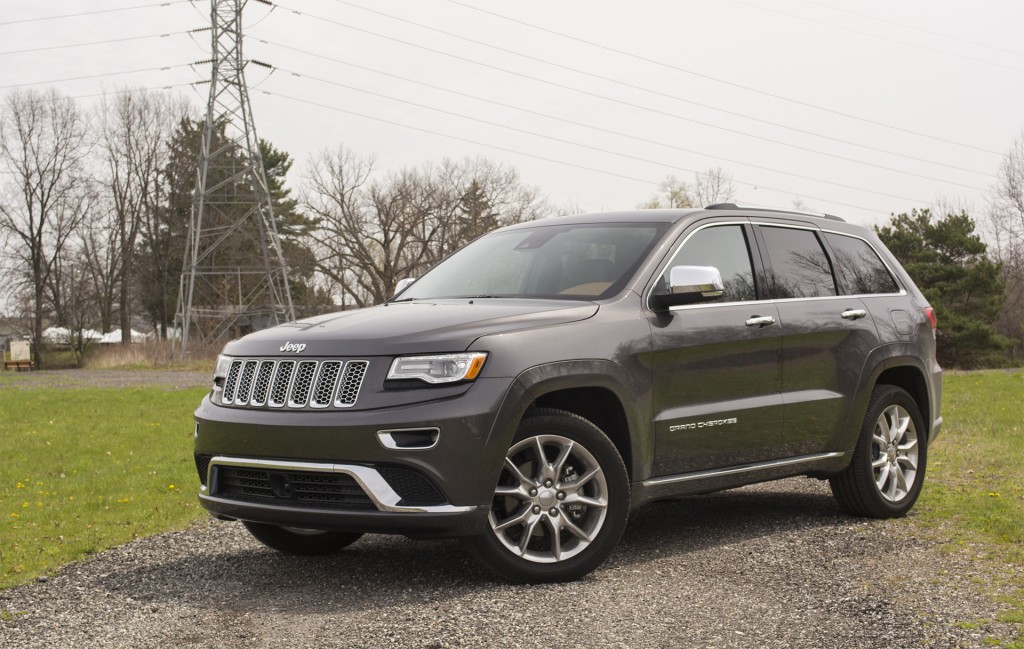 Jeep does have something very special with the Grand Cherokee. It offers an impressive interior, wide range of engines, smooth ride, and off-road capability that puts in a class of its own. The only downfall for this model is its questionable reliability history which could put some buyers off. This is a shame because this is the best Grand Cherokee they have built. If Jeep can work out the reliability, we would be happy to recommend it. As it stands, we say proceed with caution if you have your heart set on one.