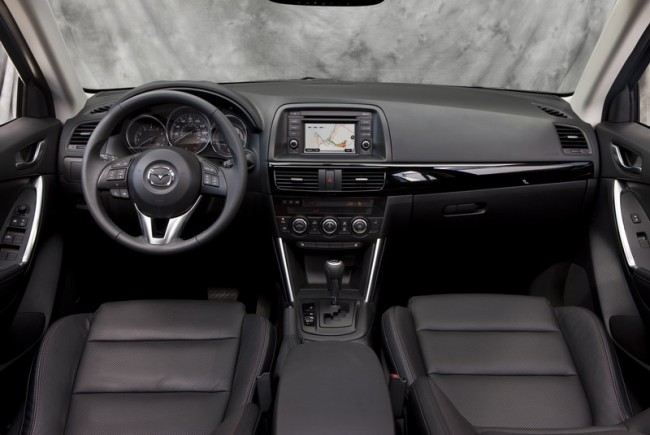 Overview (Final Grade after 8 Categories: B+)

Most everything is carryover for model year 2015 in regards to Mazda's hot selling compact family SUV which surprised even the manufacturer by managing to sell about 100,000 units each year it has been on sale. Those figures aren't ahead of the giant heavyweights in this class like the CR-V, RAV-4 and Escape but it does outsell a surprising number of rivals with a planned future increase in production capacity for the CX-5 one possible way for this vehicle to finally reach the upper echelon of this hot vehicle class in terms of units sold.

But even though models in the compact family SUV segment exist in a hyper competitive and very lucrative segment, the important thing we are here to answer is whether or not the 2015 Mazda CX-5 belongs on your test drive short list. Or even more, does it belong in your garage? Because these vehicles are the everyday family workhorses that never get a day off. They take the kids to school, you to work, on weekends they haul home the stuff you didn't really need to buy at Home Depot and Costco and so they need to be unfailingly dependable and easy on the family finances.

So, has Mazda succeeded with the CX-5 in creating a crossover SUV that can be all things to all people? Read on to find out. 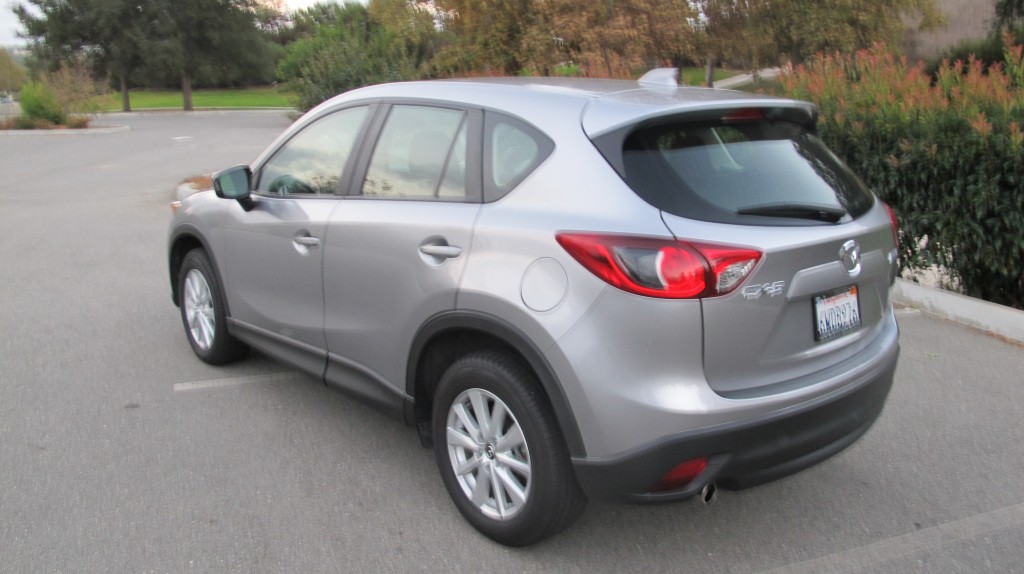 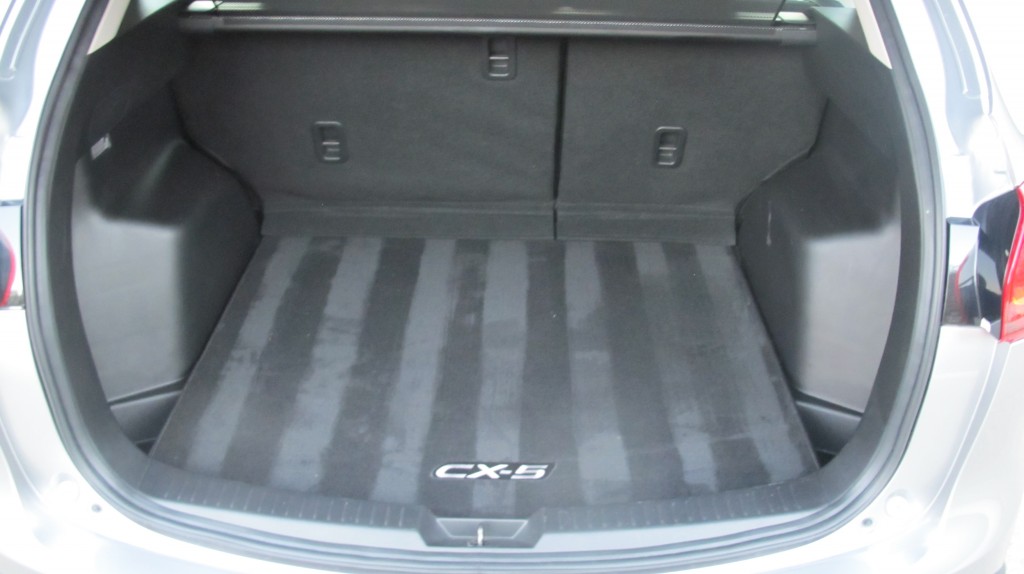 Mazda's design language is easily visible all through its many vehicles starting down with the Mazda3 moving through the Mazda6 family sedan and culminating in the stylish, sporty and pert looking 2015 Mazda CX-5 Grand Touring tester. It was resplendent in a glittering maroon color that made it look far more expensive than it really is. The tail lamp treatment, headlamps, side view and grille design all flow into each other with a unison that is hard to find among SUV crossovers. Case in point, the Toyota RAV4 which looks like it was designed by committees which neglected to communicate with one another.

The layout of the dashboard inside the 2015 Mazda CX-5 is very reminiscent of the one found in the Mazda6 family sedan so it manages to give this SUV and more sporty feel from behind the wheel than any of class competitors like the Nissan Rogue, Volkswagen Tiguan or Toyota RAV4. Whereas you feel sort of like you are sitting on top of other family SUVs, in the CX-5 Mazda somehow managed to keep a commanding view of the world around you and mated it with a seating position that makes you feel more like you are in a sports sedan. Not quite like a Miata but the CX-5 feels very "Zoom-Zoom" from behind the wheel.

Materials quality is slightly above the class average and looks solidly assembled and built to withstand the worst kids and dogs can throw at it. Our top of the line Grand Touring model came standard with leather seating, dual zone climate control and ambient mood lighting all of which added to the interior's relatively upscale feel. Cargo capacity, especially given the sexy exterior lines, in plentiful with 34.1 cubic feet with the rear seats in place and 65.4 with the folded flat. That may not lead the class but it is certainly better than what you get in the style led Nissan Juke or Kia Sportage. 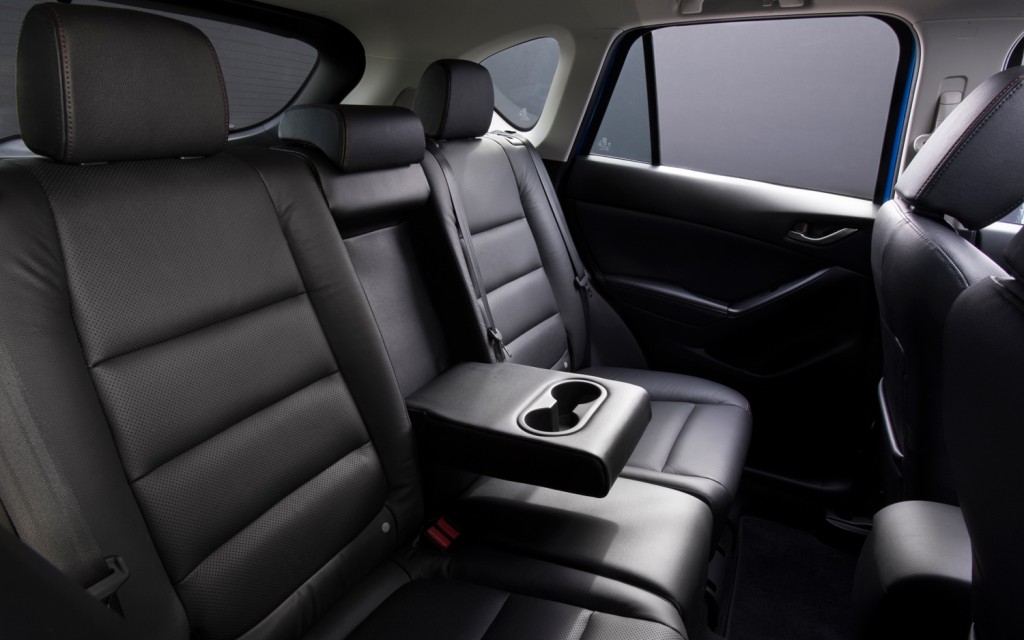 This lower than average score comes down to one failing in the 2015 Mazda CX-5 and one failing only—that of the Garmin based in dash navigation system and infotainment system. Input response is woefully slow with the USB port taking at least 3 minutes to pull up all of the songs from our iPod only to have to repeat the process again each time you start the car. We began to rely solely on the Bluetooth wireless audio unless we were going on a very, very long drive and were sure we were not stopping. The screen is also small by class standards and the navigation graphics are old school. Thankfully for 2016 Mazda will rectify this failing with an all new in dash head unit going hand in hand with a slight mid-life refresh.

Mazda, with their SkyActiv technology and engines, continue to amaze us by providing amazing real world fuel economy figures whenever we test one of their vehicles. The 2015 Mazda CX-5 Grand Touring has an EPA fuel economy rating of 25 city/32 highway on regular unleaded and over the course of a week we averaged 31.7 miles per gallon. That's just shy of the highway average which is amazing considering we enjoyed plenty of time at the CX-5's 2.5 liter 184 horsepower 4-cylinder engine redline, so sweet a roar does it make. Our tester was front-wheel drive only but all-wheel drive is optional. 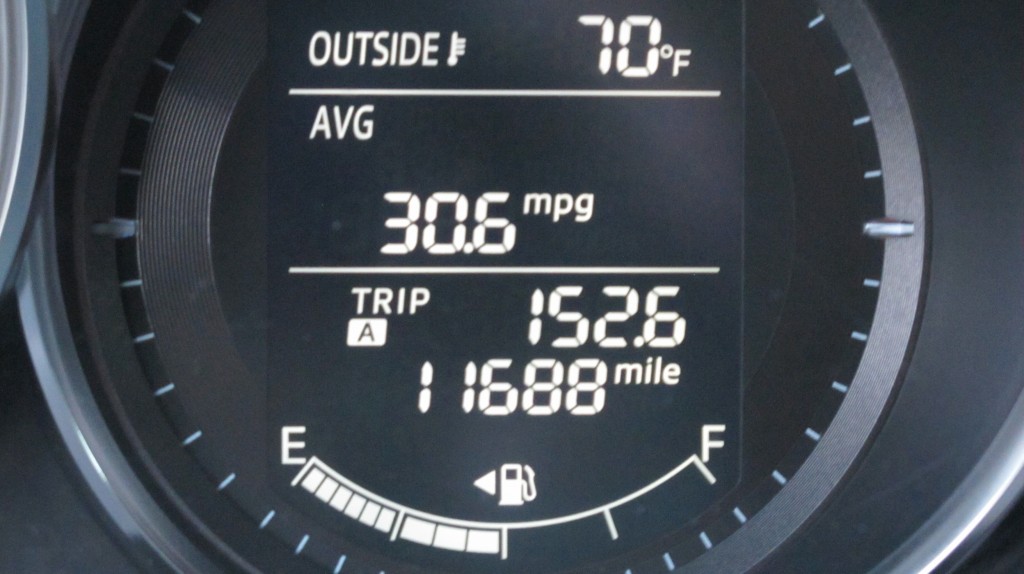 Although there have been no recalls thus far on the Mazda CX-5, J.D. Power and Associates rated it only 2 and a half stars out of five in its predicted reliability section. In fact, most of the negativity seems to focus on the CX-5's interior and much like Ford saw its quality rankings tank not because of mechanical issues but rather with customer dissatisfaction with their Sync and My Ford Touch infortainment systems, we think the same thing has happened here to Mazda. So while the basic design of the interior infotainment systems are annoying they do not mean the car isn't built to last. Another complaint was a lack of power from the 2.0 liter 150 horsepower engine standard on base Sport models. Again, nothing mechanical.

SkyActiv Technology not only makes Mazda's CX-5 lighter but it also increased the compact SUVs body rigidity to the point that it easily passed all tests thrown at it by the IIHS (Insurance Institute for Highway Safety) earning it a Top Safety Pick Plus award. That is the highest honor the organization awards any vehicle and considering compact SUVs are used as the favored transport by so many families we are happy to see that Mazda took that into account when designing such a safe vehicle. Our tester also came with Blind Spot Assist Warning and something called Smart City Brake Support which at lower speeds can detect impact with the vehicle ahead and can start the braking process for you. 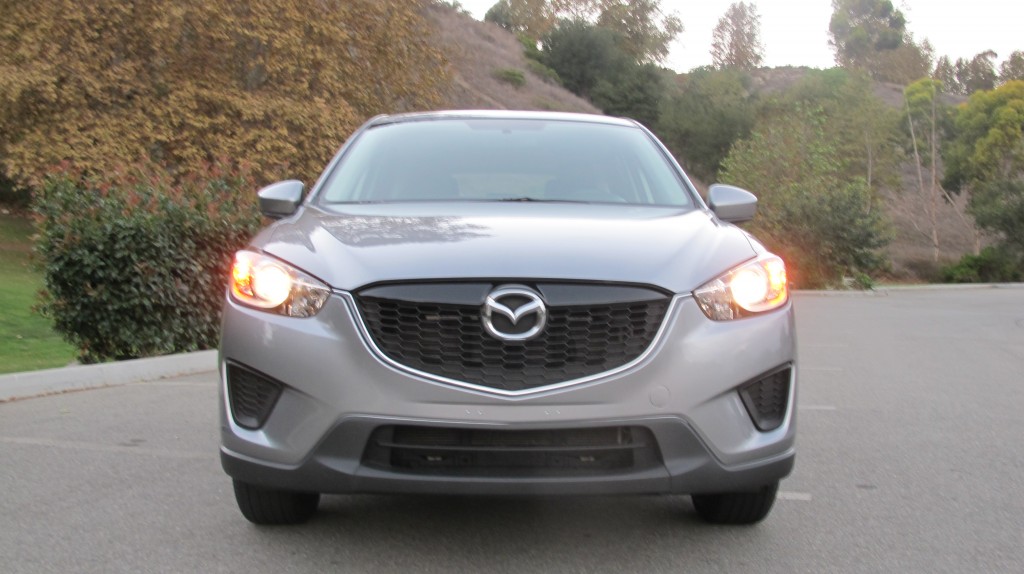 Unlike most compact family SUVs, the 2015 Mazda CX-5 in base sport trim is available with a 6-speed manual gearbox which is actually quite a pleasure to use and makes the most of that trim level's base 2.0 liter 155 4-cylinder engine. Prices start at just a little over $21,000 and that includes all of the basics so if you can shift for yourself this really is a fun and unique value choice to make in the segment. We do recommend you avoid the automatic version, however.

The trim levels above Sport known as Touring and like our test model the top of the line Grand Touring come equipped with a potent and rev-happy 2.5 liter 184 horsepower/185 lb. feet of torque 4-cylinder which is mated nicely to a sweet shifting six-speed automatic that always keeps the engine in its sweet spot power wise. The engine note is sufficiently hushed at cruising speeds but makes that sweet metallic howl Mazda's are renowned for when approaching the redline.

Steering feel is without question best in class with plenty of feel but no artificial heaviness or undue dartiness that can make parking lots an operation in annoyance. Ride quality isn't quite as smooth as in, say, a Honda CR-V but cornering agility and that liberating feeling that the vehicle is doing exactly what you tell it is ever present. That not only increases a driver's piece of mind but can make them feel like a driving hero on those occasions they want to take the long way home. And the 2015 Mazda CX-5 is one of the few SUV crossovers which would ever make you want to do that. Even with the kids in the car.

According to Kelley Blue Book, Mazda as a car company has been given its award as least expensive to maintain and run over the next five years overall. And considering how few people take into account that each new car or SUV has different and unique servicing needs, the long term maintenance costs can be vastly different. And considering the fact that the nicely equipped base CX-5 Sport model with all the basics you need at just over $21,000 plus the best manual gearbox to ever feature in an SUV, you can't ask for much more. 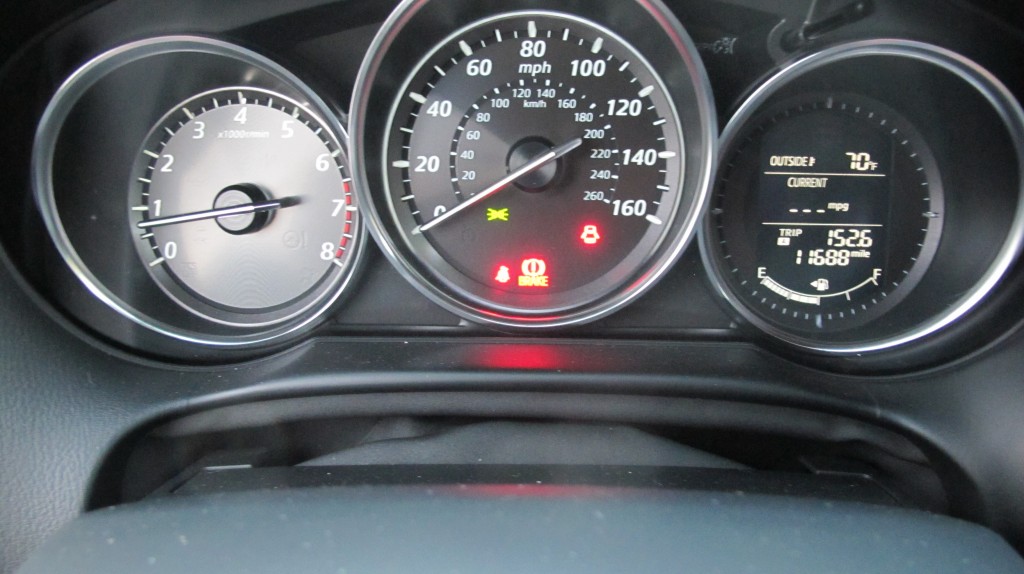 Just by changing its infotainment system to a unit more like the one in the excellent Mazda3, next year's CX-5 will easily score up in the A range. It is fun to drive, agile, nimble and handles in a manner you just don't find in any competitor. But it is also plenty spacious, it cargo hold offers plenty of utility and it is stylish. All told that makes it a pretty tough package to beat with only the 2015 with its superior interior proving to be a thorn in its side. So definitely check out the Honda and check back in 2016 when Mazda strikes back with a refreshed version of the CX-5. That's when the battle for compact SUV supremacy will get very, very interesting. 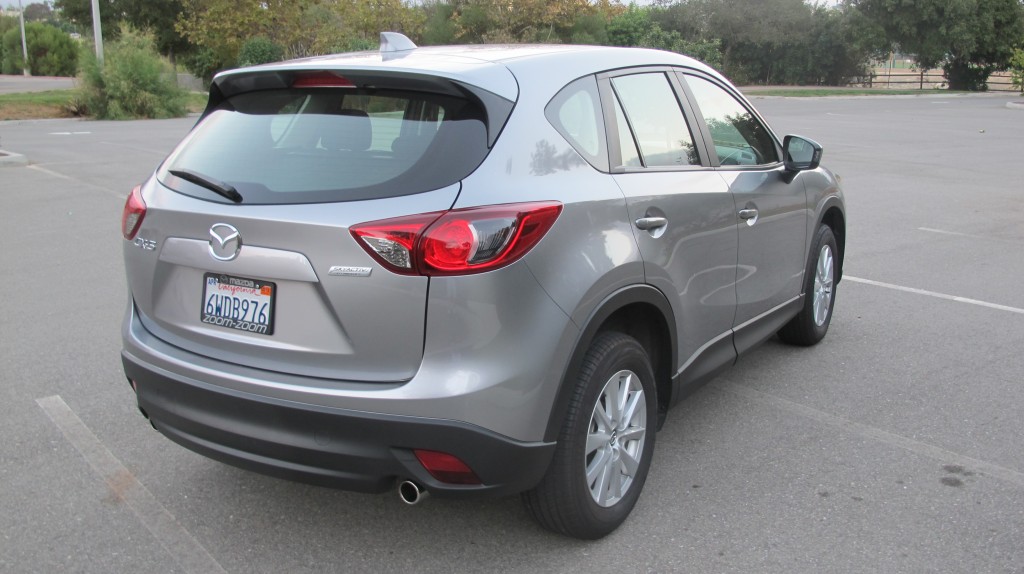