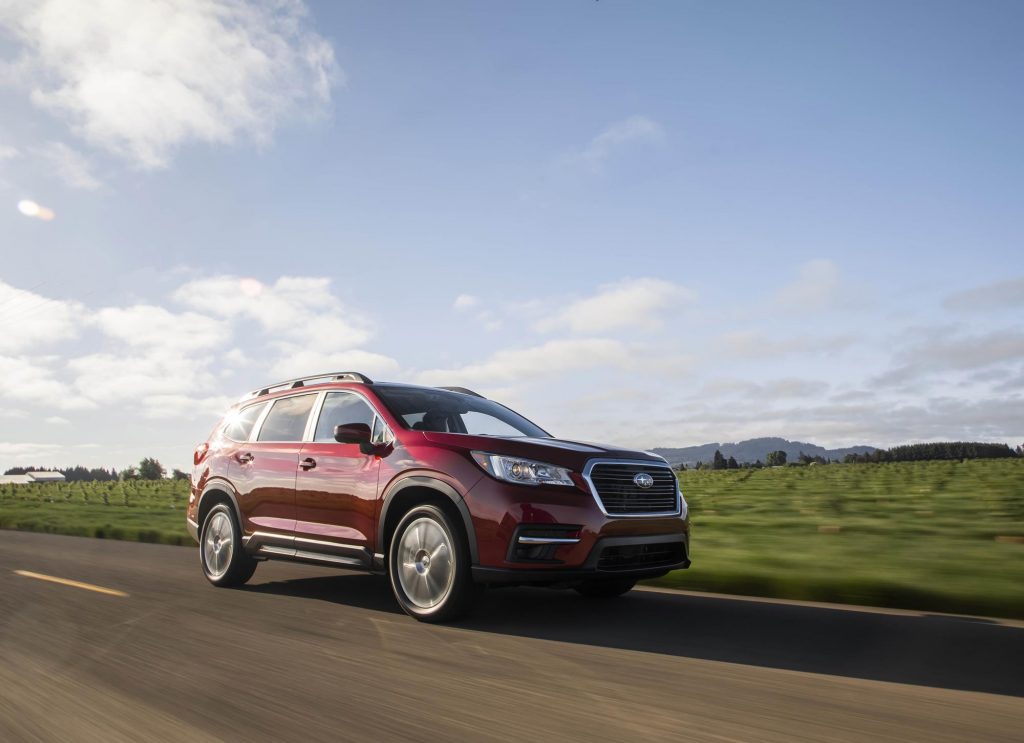 The Subaru Ascent debuted in the 2019 model year as a new three-row option for Subaru fans. The Ascent picks up where the discontinued Tribeca left off several years ago, giving Subaru buyers an option for growing families.

The 2020 Ascent features a usable third row, good fuel economy, high safety ratings, and Subaru's signature all-wheel drive. The Ascent is built on the new platform Subaru developed for most of its offerings, including the Outback and Impreza. The 2020 Subaru Ascent has seating for up to eight and adds a rear-seat reminder as standard this year, boosting safety. Power-folding side mirrors are also an option for 2020. The 2020 Ascent is otherwise unchanged from its 2019 debut model.

Notable for the 2020 Ascent is its true-to-form Subaru simplicity in design, the ability to tow 5,000 pounds, and an MPG rating of 23 mpg combined with standard all-wheel drive. The engine and transmission are standard in all four trim levels, as is AWD. Competing in a market full of great midsized three-row options, the Ascent hits the mark and should resonate with many buyers. 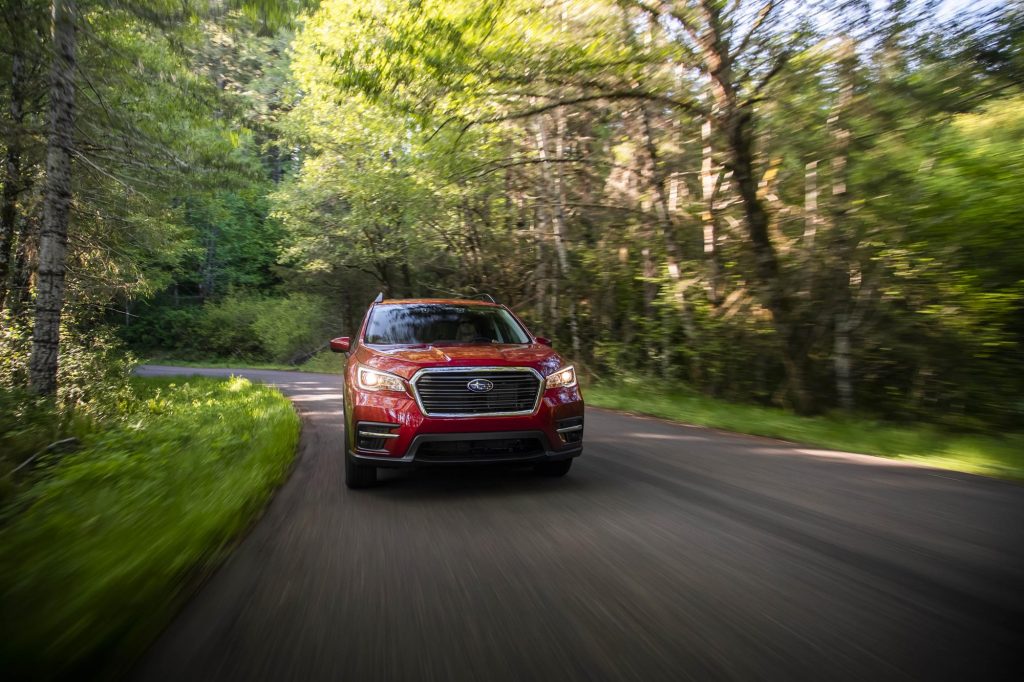 There isn't generally much envelope-pushing over at Subaru when it comes to styling on its mainstream vehicle offerings. The Ascent is no different, with elements from both the Outback and the Forester showing in the Ascent's overall design motif. It's simple and contemporary, but not groundbreaking or terribly interesting.

Unlike many makes in this field, Subaru eschews the big and beefy looks that predominate. Yet "sporty" isn't a word that describes the 2020 Ascent either. The best, least offensive word is "contemporary." The Ascent isn't ugly or lost in the parking lot, but it isn't eye-catching or standout either. It's average. That's a downer given the competitive nature of the three-row market today.

The upside for Subaru fans is that the Ascent's looks fit perfectly into the Suby lineup. There are some upscale, almost classy notes taken from the Outback and some functional, purpose-designed notes from the Forester. Blending together into a good, if uninteresting, combination for the Ascent that will fit with many Subaru fans as-is.

Those functional points are very clear in the 2020 Subaru Ascent's exterior, which seems to point towards the interior as the focus. The interior, however, doesn't get fancy with bling or promise either, so if that's the expectation, there will be disappointment.

The focal point of the 2020 Subaru Ascent's interior is on functionality and ergonomics. This comes at the expense of eye-grabbing bling or materials-aided design. If the word "austere" fit with any vehicle, it's with the interior of the Ascent. That's not a bad thing, of course, and Subaru fans will welcome that. The point of Subaru vehicles is not to entice, but to aid getting to somewhere exciting.

Don't mistake austere for uncomfortable or empty, though. The 2020 Ascent has quality seating and well-considered storage and controls. The front row features comfortable and adjustable seats that accommodate most everyone, including those over six feet. Legroom is good and seat bolsters are just right.

The driver's controls are intuitive and easy to find, with a focus on functionality and daily use. There are a lot of buttons in the center console, however, that seem redundant given the large infotainment screen that could house much of that virtually. That detail gives an unnecessarily busy component to the otherwise clean dashboard.

The third row of the Ascent is mostly child-sized instead of adult-friendly, but they will work for grownups in a pinch. Three across would be very tight, though. Headroom is good in the third row, a rarity in the segment, but knee room and knee bend is not comfortable for adults back there.

Cargo space in the 2020 Ascent is excellent. The third row down makes for 47.5 cubic feet and there are 86.5 cubic feet with the second row also down. An integrated roof rack is also standard on the Ascent and can be optioned to add luggage racks or ski/toy racks. In addition, the Ascent can tow up to 5,000 pounds when equipped with a tow package.

A 6.5-inch color display is standard in the Ascent, but most models come with an 8-inch touchscreen that adds voice controls, Apple CarPlay, Android Auto, and connected apps. Those familiar with other Subaru models will recognize the tech found in the Ascent.

The larger screen and upgrades found in the new Outback and Legacy have not yet made it into the 2020 Ascent, but we expect them to appear next year. The current technology is phone-dependent, using the user's phone for most apps and streaming. Navigation is available in-car as an upgrade, but with CarPlay/Auto, there's little need and voice recognition with both phone apps are better than the in-car version. 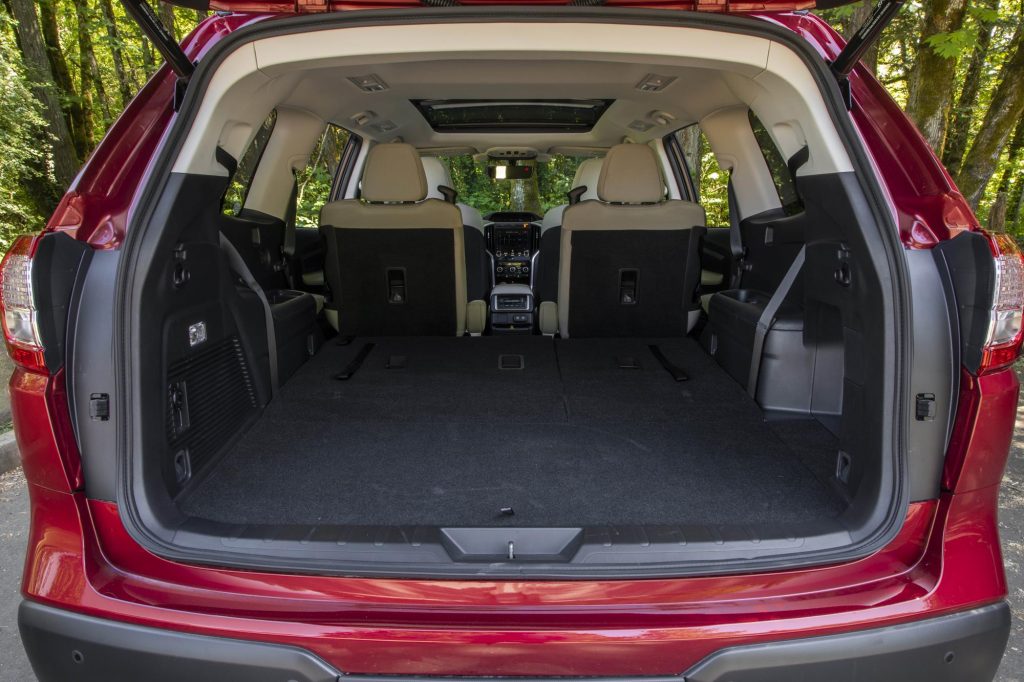 The 2020 Subaru Ascent gets excellent fuel economy in the real world. AWD is standard in the Ascent, so comparisons to other vehicles should be made with that in mind. Given that, the 2020 Ascent does really well on paper, with an EPA rating of 21 mpg in the city and 27 mpg on the highway. We achieved over 26 mpg overall in our week-long test of the Ascent, which is three points over the listed average combined.

The Subaru brand normally has excellent reliability expectation as a rule. The Ascent, however, has an "About Average" rating from J.D. Power and Associates and their Vehicle Dependability Study. As of this writing, the Ascent has had no safety recalls or other notices.

The 2020 Ascent has received a full 5-star rating from the National Highway Traffic Safety Administration (NHTSA). The Ascent received five stars each for frontal crash and side crash tests and four stars for rollover.

The Insurance Institute for Highway Safety (IIHS) has given the 2020 Subaru Ascent top scores of "Good" across the board. In front crash prevention tests, the Ascent achieved a top score of "Superior."

The turbo lag in the Ascent is noticeable, but not out of line with most similarly-powered options on the market. As a family crossover, rather than a sports car, the Ascent drives nicely, so most will not notice the lag. The crossover gets up to speed easily and can make the pass when required. The Ascent easily totes all of the family and their stuff whatever the trip.

Handling in the 2020 Ascent is similar to what's found in other Subaru models. Akin to the Forester, the Ascent is maneuverable and precise, but not sporty. Like most Subarus, the Ascent's AWD means it feels confident at all times, no matter the conditions.

Off the road, the Ascent is more than capable of doing light-duty off-road and getting to the fun places the brand is most known for accommodating. The Ascent is, in a nutshell, a Subaru.

The 2020 Subaru Ascent is good three-row family crossover that competes well against others in this contentious market. It appeals to Subaru buyers for sure, with its design and feel. It fills the three-row slot well for the company and should follow other Subaru models with high resale down the line.

The Premium trim level seems to be the best price versus amenities option for the Ascent. The base model lacks many things that aren't much of an upgrade cost moving to the Premium. The Limited trim has a lot of great items, including advanced safety techs, so that's a good option as well. The Touring model adds little for everyone but those who must have every option included. 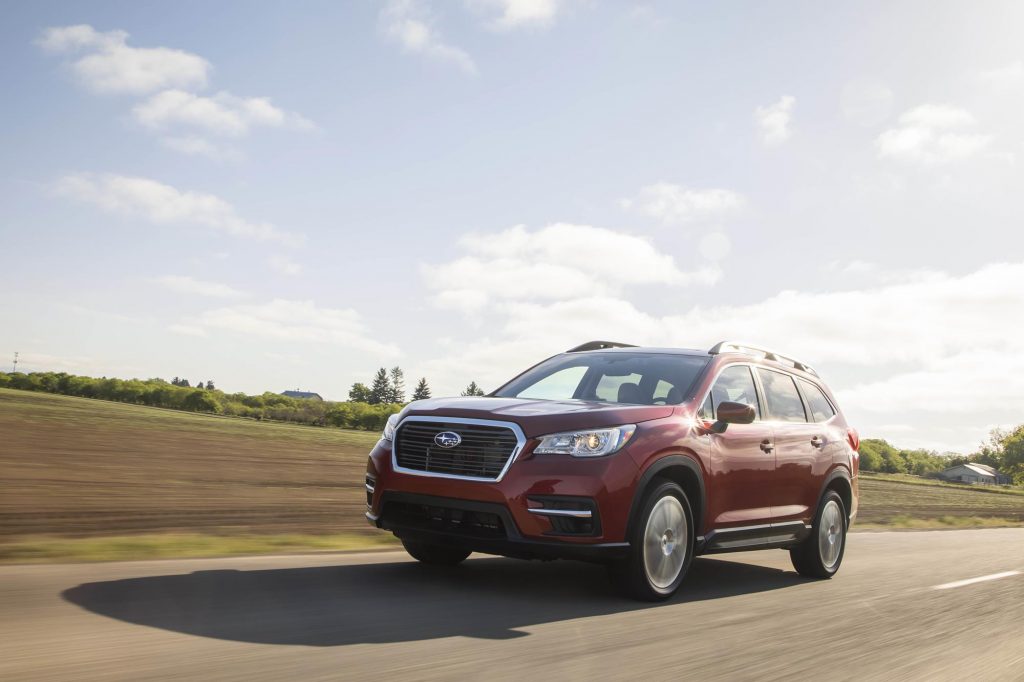 The three-row, midsized crossover arena is full of great options to choose from. Chief competitors for the 2020 Ascent are the Honda Pilot, the Chevrolet Traverse, and the Hyundai Palisade. The Pilot matches the Ascent for off-road capability, but the Traverse and Palisade have better ergonomics and technology offerings. Both the Traverse and Palisade are larger than is the Ascent. The Ascent, above all, has better fuel economy and a definite Subaru appeal not found anywhere else.

The 2020 Subaru Ascent is a more than solid choice for a family looking to get into a three-row that isn't too large or boring. With Subaru styling and appeal, the Ascent definitely delivers good times when required and it will get you outdoors and to the places you want to go without problems. Good fuel economy and a smart interior top it all off.