The 2018 Toyota Tundra is a continuation of the full-size half-ton pickup truck introduced for this generation in 2015. The Tundra embodies Toyota's long-sought foothold in the American pickup truck market. While its sales are still near the bottom of the pack, the pack comprises only five automakers. Three of those are long-standing domestic makes with large volumes of fleet sales -  something Toyota trucks aren't involved in.

For 2018, Toyota refreshed the Tundra's styling and added a few tweaks to its strong looks. Toyota's Safety Sense advanced safety system is standard. A new TRD Sport package has been added as an option for the SR5 trim, and Toyota has removed the standard two-door cab from the lineup entirely.

For the buyer, the 2018 Toyota Tundra offers box-checking capability, a usable overall design and a strong reputation for reliability. The Tundra is not the flashiest or best in the market, but it satisfies all of the line items truck buyers want with no hassles. 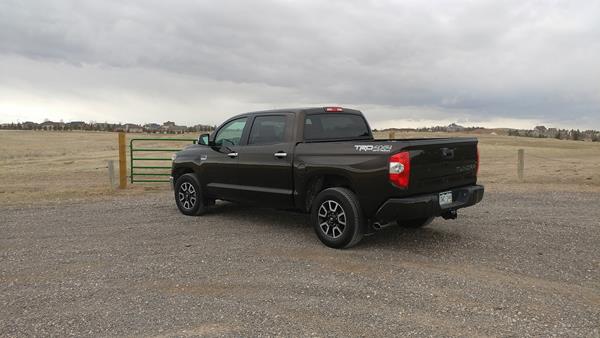 Rough and ready looks are the norm for the 2018 Toyota Tundra, with a muscular build and strong presence being its foremost qualities. Some refinement has been added to the 2018 refresh, including less emphasis on the gigantic grille work and a tempering of the large "Toyota" stamp on the rear tailgate. Other changes are more subtle, aiming to keep the muscular appearance of the Tundra while adding more modern refinement to the design.

The work-a-day readiness of the 2018 Tundra is apparent in its generally utilitarian build and cannot be ignored. The wide, flat, heavy grille is a bit more tempered this year, but still dominates the front fascia. An integrated scoop and strong shoulders through the fenders speak to that. The intake also helps emphasize the engine's grumble when pressed into action, another high point of the new Tundra.

The line from the fender bulge runs along the bodywork to create the beltline under the greenhouse. This terminates at the top edge of the truck's bed, dividing the flat panel work of the body from the tumblehome angle of the cab above. Added lines for the rear fender bulge, a running board crease and other small touches increase the Tundra's appeal.

The Tundra has some segment-exclusive offerings in its exterior as well, most notably the three-piece bumper as standard. Toyota now also offers a spray-in bedliner option along with the plastic liner (Skid Resistor) that's always been available. 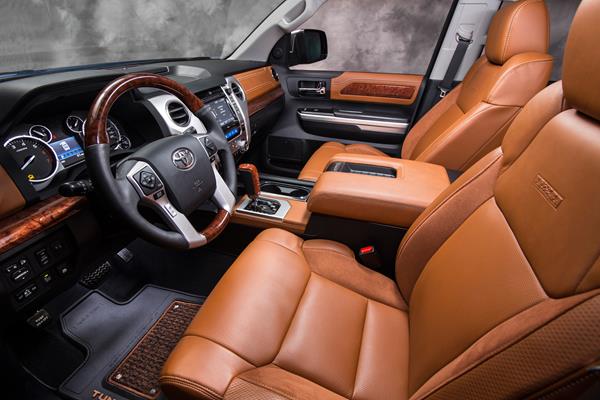 The 2018 Toyota Tundra has a lot of interior space, especially with the larger Crew Cab option. Even the King Cab carries plenty of elbow room, not to mention legroom and headroom. The slightly updated instrument cluster is still largely a throwback. Which means it's not configurable, though easy to read and unobtrusive.

Where the 2018 Tundra has improved greatly over the 2017 model year is interior accouterments, especially in driver's aids and standard safety equipment. Front seating is still wide and accommodating, and the backseat bench is useful for kids and adults in both cab configurations. The Double Cab design offers a seat delete option for the rear to make it cargo-only. The Crew Max design offers seating for up to six in the Tundra.

We like the wide door swings (even in the Double Cab) and folding back seats to add cargo space when required. We note that the latter option is removed when the larger fuel tank is opted for.

Tie-downs for child safety seats are relatively easy to get to, no matter cab configuration. The 2018 Tundra's cargo space in the bed is good, especially in the longer bed option. Integrated tie-down rails, bed liners and many other options are available from both Toyota and dealerships to enhance the cargo space's versatility. Also available are 120-volt outlets and added cargo lighting.

The technology and infotainment in the 2018 Toyota Tundra is a mixed bag. Safety technology is at the forefront of today's expectations, whereas infotainment is becoming very dated compared to rivals.

The base package of Entune offered in the 2018 Tundra includes Bluetooth connectivity, Siri Eyes free voice recognition and Toyota's standard voice recognition. Upgrades to higher packages of infotainment add several apps, most powered by a connected smartphone. Built-in apps for navigation, audio streaming and connectivity are available in upper-trim levels.

Toyota's Entune has seen improvements over time, but is still outdated compared to most of its competition. The interface comprises large, blocky menu buttons that seem out of place on a modern infotainment package. They are easy to see and use, and are especially nice when the truck is moving and the driver or front passenger is attempting to make selections. Screen sizes in the Tundra are small compared to what are now industry norms, with the Tundra's largest infotainment screen measuring only 7 inches.

On the upside, the Entune technologies offered are on par with most in the pickup truck segment. 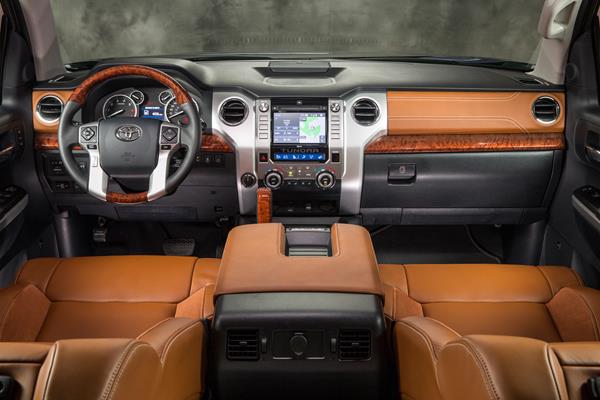 The powertrain and drivetrain for the 2018 Toyota Tundra have been largely unchanged for years. Others in the industry are busy adding gears to transmissions, upgrading engines with more technology and improving aerodynamics - all with the goal of improving fuel economy. As such, the Tundra has fallen to worst-in-class levels of mpg returns compared to similarly powered rivals.

Upgrading the engine drops mpg returns further, offering just 15 mpg combined in rear-wheel or four-wheel drive. Both drivetrains are rated at 13 mpg city, while the RWD is 18 mpg and the 4WD 17 mpg on the highway.

The segment average is now much closer to 20 mpg combined with similarly sized engines and equal or greater power outputs. The lack of a V6 option found on most rivals further dampens potential mpg savings for the Tundra.

The Tundra's overall expectation is high reliability as the norm. This has largely held true since the Tundra's introduction over two decades ago, and its high resale value is closely connected to that reliability expectation.

For 2018, the J.D. Power and Associates Vehicle Dependability Study rates the Tundra as "Better Than Most," a rating it's received year-on-year for almost its entire lifespan.

Recalls for the Tundra have been minor. There have been no recalls published for the 2018 model, as of this writing.

For several years, the safety ratings for the Toyota Tundra have been unchanged. The truck now comes equipped, as standard, with several new technologies such as crash mitigation with automatic braking, lane departure warning, automatic headlamps, adaptive cruise control, etc. Those have not boosted crash test ratings, but add a lot in terms of everyday confidence driving the Tundra.

The National Highway Traffic Safety Administration rates the 2018 Tundra four stars overall (out of five), with four stars for frontal crash tests, five stars for side crash tests, and three for rollover tests.

The Insurance Institute for Highway Safety rates the 2018 Tundra with top scores of "Good" on moderate overlap front test, side impact and rear crash protection results. The Tundra received a second-best score of "Acceptable" for roof strength tests and a bottom score of "Marginal" for the small overlap front crash test. 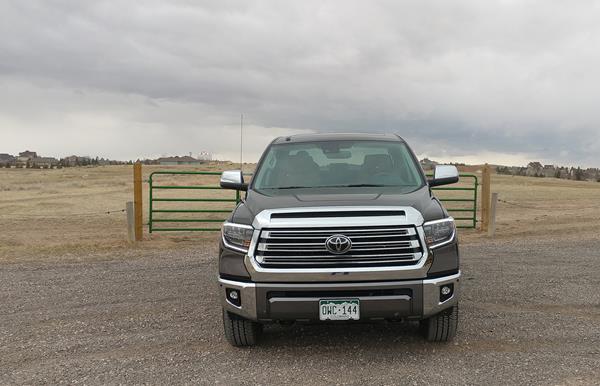 The base engine for the 2018 Toyota Tundra is a 4.6-liter V6 that turns a six-speed automatic transmission. With 310 hp and 327 lb-ft of torque, this engine is commensurate with what most base level V6 and V8 engines from competitors are offering. Rear-wheel and four-wheel drive are available with this engine and maximum towing is rated at 6,800 pounds when equipped.

The Tundra also has a larger and more popular engine option in the long-lived 5.7-liter V8, which outputs 381 hp and 401 lb-ft of torque to a six-speed automatic transmission. RWD and 4WD are available with this powertrain. Towing is rated at up to 10,500 pounds. Muscular sounds are a hallmark of this engine.

Especially with the larger engine, towing and hauling with the Tundra is a breeze. The ratings feel well below actual capability in practice. Limitations to towing are about the Tundra's design rather than engine capability, so drivers can be confident that it won't struggle when used as rated.

On the road, the 2018 Tundra is comfortable but not cushy. Unlike many rivals, Toyota has not opted to improve interior noise levels or ride quality, even in higher trim points. In our 1794 test model, for example, the highway noise level was fairly loud compared to most competitors, even in lower trim points. Ride quality is not rough, but it's very truck-like, which some may want in their pickup.

Off the road, the 2018 Toyota Tundra is a great drive, with good handling over dirt roads and washboard. There are great off-pavement options in the TRD packages for serious dirt-digging and landscape crawling.

Pricing for the 2018 Toyota Tundra will not be lower than any rival, and manufacturer incentives for it are rare. Its primary strengths in terms of value are its high reliability expectation and high resale retention. Because the truck has a solid reputation for both of those and is well known as a daily workhorse, it's generally considered an excellent value in the segment. 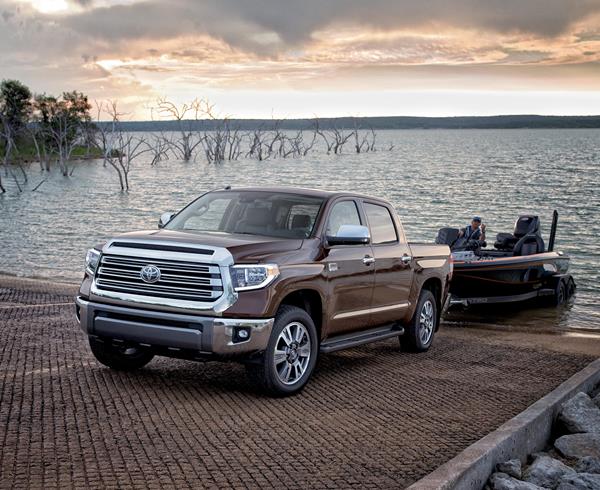 Base model Tundra trucks are rare, as Toyota doesn't target fleet sales. This makes purchasing a used Tundra less likely to be from auction. This also means most used Tundras were consumer-owned and are more likely to have been babied rather than abused.

The Ford F-150 leads the segment for good reason, offering great fuel economy and lots of engine and body options. The Chevrolet Silverado offers high value for dollars spent, while its more premium GMC Sierra twin is classy and upscale. The Ram 1500 is both a workhorse and a highfalutin beauty, with best-in-class numbers for towing, hauling and more, depending on configuration. A diesel option in the Ford and Ram are strengths versus the Toyota as well.

The truck buyer should cross-shop liberally in the full-sized half-ton segment. Yet the Toyota Tundra will entice many, thanks to its high value and reliability, and ability to check boxes. Those are hard to argue with and definitely reasons why the Toyota Tundra is a fast mover on the sales market.