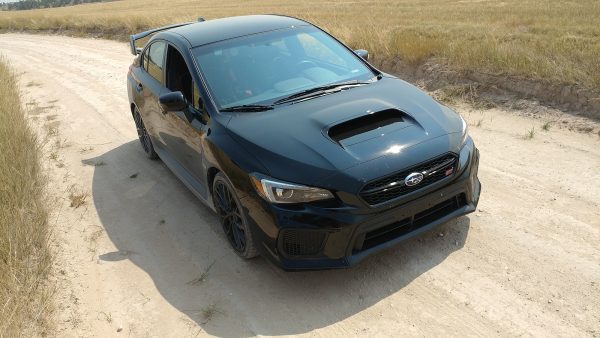 The Subaru WRX, named for the World Rally Cross, is designed as a rally racing sports car that is road legal and capable of hauling up to five people. In everyday use it's not as comfortable or as ergonomic as other sedans in the compact segment because, at its core, this is a sports car. Not a family hauler.

That said, the WRX is fully capable of hauling the family to the soccer game, grabbing some groceries and making weekend trips to grandma's. Even if grandma happens to live at the end of a long stretch of unpaved road. Which would be the WRX's preference anyway.

The 2018 Subaru WRX carries forward with changes made last year, coming in two flavors with several trim levels. The standard 2018 WRX is lower-cost and less complex than its more powerful, race-ready WRX STI stablemate. For 2018 a new front fascia, some steering and suspension tuning, and interior noise insulation are added to the WRX.

For those looking for a fun but practical sports car, the Subaru WRX definitely fits the bill. 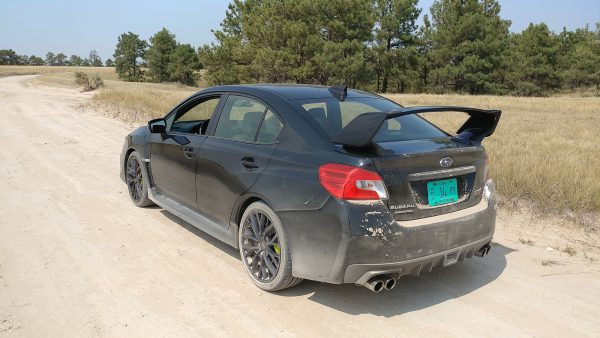 The basic design for the 2018 Subaru WRX is that of most compact sedans: a three-by-three design with a third of the car dedicated to the hood and fenders, a third to the front seats and middle pillar, and a third to the rear, with a clipped deck and fastback appearance. Although the design is simple and often used, Subaru adds its own elements to it for a great look.

The 2018 WRX has a revised front fascia that is more aggressive than it was before. A thicker bumper line, smaller grille, larger lower intake, lower scoops and slightly narrower-appearing headlamps change the front's look. Above that the hood scoop and aggressive hood lines run to the sharply raked windscreen for a fast-paced appeal.

The bodywork on the 2018 WRX is simple but definitely all sports car. A sharp cut near the bottom emphasizes the aerofoil up front and carries it back to the rear wheels. The clipped rear deck is angled slightly for a speedier appearance. Optional spoilers can emphasize that further.

On the STI model, the front fascia gets even more aggressive with a larger hood intake surround, emphasis on the bezels surrounding lower intakes and lighting, and colorful STI badges throughout. A huge rear spoiler is also added, but can be removed or replaced with another option. 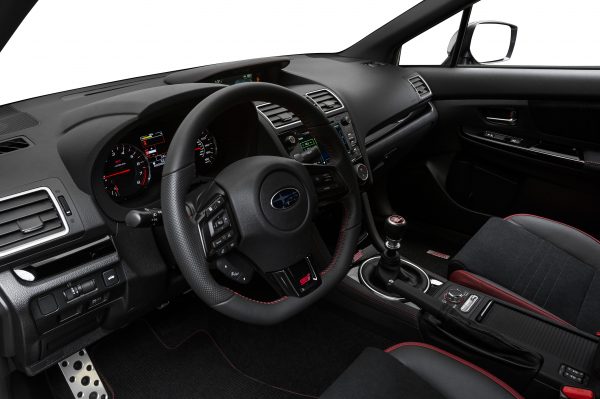 There were a few changes made to the 2018 WRX model to improve interior comfort, but they are only slight. The WRX is very sports-centric. The front seating, lack of much interior bling and emphasis on materials quality over appearance all speak to that. A driver-centric approach is the baseline upon which the Subaru WRX builds its interior.

The driver and front passenger are treated to well-done seats which, though low to drop into, are well bolstered and firmly padded. These seats accommodate even the largest of drivers with good headroom and legroom and plenty of adjustability. The rear seats pay the price with far less legroom and somewhat limited headroom.

The additional sound baffling in the 2018 WRX does make a difference in highway driving, though road noise is still very noticeable. As a sports car, the WRX uses a stiff suspension that is not well equipped to absorb noise or vibration.

Cargo space in the 2018 Subaru WRX is good, with a 12 cubic foot trunk and wide opening for easy loading. Inside the car, storage is a bit sparse, but not terrible and most will find a place for their gadgets and gear.

Subaru has definitely kept up with the technology game in the WRX. The base level infotainment includes a small but usable 6.2-inch touchscreen with good basic connectivity on board. Bluetooth and satellite radio are included, as is a rearview camera.

The upgraded infotainment is a larger 7-inch display with better audio, navigation and more. Including Subaru Starlink telematics along with apps like Pandora and Yelp. This touchscreen accepts many tablet/smartphone gestures, including pinching and swiping, as inputs for a more intuitive feel. The upgraded screen does not mean an upgrade to the rearveiw camera, which still produces a grainy, too-small picture to be useful for anything but tight parking maneuvers.

There is an app option for the WRX user's smartphone that allows you to remotely start (with automatic transmission), lock and unlock, or locate the car using a phone. 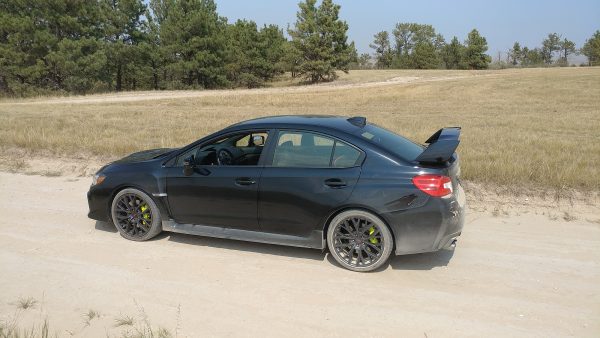 Compared to others in the segment, the 2018 Subaru WRX has poor fuel economy where the expectation is to push 40 or more miles per gallon on the highway. Compared to the sports compacts offered, the WRX is on par with its rivals when it comes to both mpg expectation and reality.

The base engine in the 2018 WRX has both a manual and automatic transmission option. The manual transmission is EPA-rated at 23 mpg combined, with 20 mpg in the city and 27 mpg on the highway. The automatic changes that to 21 mpg combined (18 city, 24 highway).

The larger engine in the STI model is mated only to a manual transmission. Its EPA rating is 19 mpg combined, with 17 in the city and 23 on the highway.

Our real-world driving of the WRX model last year found that it achieved the EPA's ratings on the road and when driven judiciously - which is difficult to do in this car. With the 2018 STI, our returns were much lower than the EPA's estimates, but much of our driving involved carrying two to three passengers, and sliding along dirt roads and back country roads. Drivers who can keep their foot off the floor may achieve better fuel economy returns than we did.

With a history of excellent longevity, long individual ownership and a high reliability expectation for the Subaru brand, the WRX and WRX STI should score well here. As no results for the 2018 model year are available as of this writing, we are using 2017 results as the vehicle is largely unchanged. The 2017 Subaru WRX received an "About Average" score in the J.D. Power and Associates Vehicle Dependability Study. This was largely due to small, but consistent problems with non-mechanical parts of the WRX STI model. 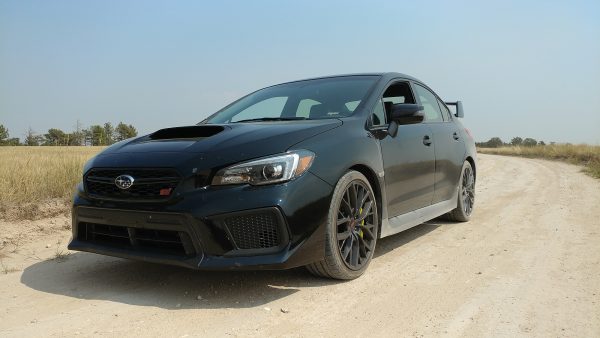 As of this writing, the 2018 Subaru WRX has not yet had published results from crash testing from either the National Highway Traffic Safety Administration (NHTSA) or the Insurance Institute for Highway Safety (IIHS). There were no NHTSA numbers last year either, but the IIHS did give the 2018 WRX a "Top Safety Pick" rating with perfect "Good" scores across the board. We expect that will return for this year's results. With all optional advanced safety equipment installed, the WRX is also eligible for a "plus" rating from the IIHS as well.

The 2018 Subaru WRX is powered by a 2.0-liter four-cylinder engine that's been turbocharged to output 268 horsepower and 258 pound-feet of torque. All-wheel drive is standard, as is a six-speed manual transmission. A continuously variable transmission (CVT, automatic) is optional and includes paddle shifting on the steering wheel.

This base-level boxer-style engine can propel the WRX to 60 mph in under 6 seconds.

The WRX STI model is equipped with a 2.5-liter tubobocharged four-cylinder engine that outputs 305 horses and 290 lb-ft of torque. A six-speed manual transmission is the only option, as is all-wheel drive. A driver-controlled center differential, a performance-tuned chassis and larger brakes are also included. Five-second 0-60 mph times are possible in the STI model.

The 2018 Subaru WRX and STI are built for speed and endurance, with superb handling and excellent cornering dynamics. Powerful acceleration with a broad band of high output is met with a short stick throw and positive-feedback clutch for manual shifting. There are few rivals that can match this kind of well-designed, finely-tuned excellence at this price point.

Considering its standard AWD and good versatility as a sports car, the base model 2018 WRX is competitive in its segment. A high resale value helps boost that competitive edge. Most buyers are more likely to be buying the Premium trim for the 2018 Subaru WRX, which offers more amenities and better accouterments for the cash paid. Again, high resale helps mitigate the somewhat higher cost versus competitors.

The STI model is tougher to gauge as a return on investment. Much of the appeal of a sports car lies in intangibles that are subjective to the buyer. The STI has few competitors when it comes to its design and capabilities, and also its well-vetted and mature off-pavement chops.

Direct apples-to-apples comparisons with the 2018 Subaru WRX and WRX STI are few and far between. Chief among them are the Ford Focus ST and Focus RS, as well as the Volkswagen Golf GTI and Golf R models. The Ford Focus ST is available as a hatchback, unlike the WRX, and has an all-wheel drive option. Price-wise, the WRX beats out the Ford when AWD is accounted for. The Focus offers a good drive dynamic, powerful turbocharging and a solid interior experience, but the WRX is sportier to drive and has a more track-ready feel. The comparisons are similar with the VW GTI, which is available as a hatchback only. Of the three, the VW has the best interior experience overall.

The WRX STI sees competition from the Golf R and Focus RS, both of which are price competitive in their AWD option. Of the three, the STI is definitely more competition-ready, but the value proposition and fun factor is better with both of the competitors given their hatchback size and better daily drive dynamic.

The final verdict is difficult, as it depends heavily on the buyer's expectations, but we feel that the 2018 Subaru WRX and WRX STI are excellent choices for those who want the race credibility, excellent value and reliability of the Subaru brand, plus the extreme fun factor that is included with every WRX. The 2018 Subaru WRX is a fun little rally machine that definitely delivers on the good times. The fact that the family can come along for the ride is a great bonus.