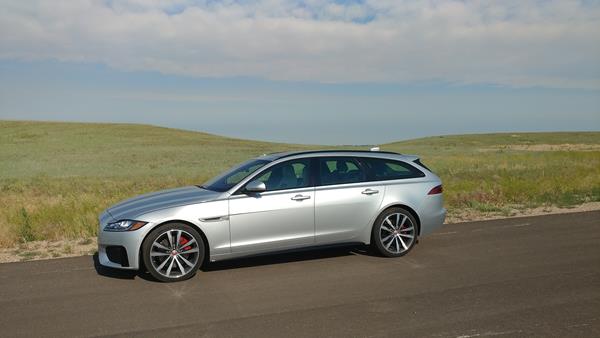 The 2018 Jaguar XF is a midsize luxury vehicle that sets itself apart from similar offerings in the segment with its Old World style and cutting-edge lightweight engineering.

Like all Jaguar Land Rover vehicles, the 2018 XF has a little British "Good Day, Mr. Bond" built in. With the XF, that comes with the rising gear selector and opening side vents upon engine start. Powertrains are sporty, drivetrains are well-designed, and interiors are upper crust and comfortable.

The Jaguar XF sedan is joined by the 2018 Jaguar XF Sportbrake wagon this year. The car is otherwise largely unchanged from its 2017 model year. A few more driver aid and safety systems have been added to their respective trim/packages.

The 2018 XF is offered in two body styles with six trim levels and four engine choices. Both rear-wheel and all-wheel drive are available in most designs. 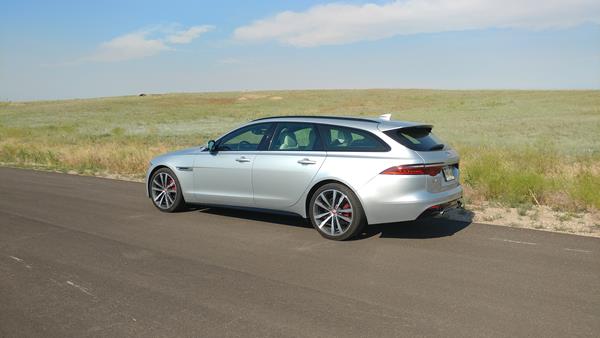 The Jaguar XF is a beautiful car with classic proportions in both its sedan and wagon designs. It begins with a classically Jaguar front grille, flanked by thin headlamps on either side. Below those are large bezels containing both fog lamps and airflow ducts for the wheels and brakes.

The action really begins above all of that, where the hood and fenders curve sensually, creating an aerodynamic that manages to be classy and sexy at the same time. Lines at the center of the hood parallel one another towards the windscreen and are mimicked by curves that drop away at the hood's edge to create the wide fenders that begin at the headlamps and move back, slimming as they go, to end at the forward roof pillar.

The line created at the lower edge of that fender continues underneath the side mirrors, window glass and behind the rear doors to create the rear fenders, dipping slightly to make the curve of the clipped coupe-styled deck above more accentuated.

Body lines are thereafter all British royalty, with a slight homage to a running board below the doors and a notch in the rear of the front fenders for a sporty exhale, which also creates the beginning of a line that lightens as it moves rearward along the bodywork.

The roof and, ultimately, the silhouette of the 2018 Jaguar XF is all sport and speed, creating the coupe'd sedan we now take for granted as the modern sedan style.

In the Sportbrake, the coupe is thrown out and the rear is instead a direct tribute to the European estate. The roofline begins its curve as it did in the sedan, but at a much gentler rear angle to accommodate the more classic rear hatchback. The XF's external dimensions remain largely the same in the Sportbrake form, but the interior gains a massive amount of cargo space thanks to this change.

Both the sedan and wagon form of the 2018 XF are beautiful examples of timeless design put into solid form.

Top-quality materials are used throughout the XF's cabin and are put together with masterful workmanship. This alone is the primary design quality of the Jaguar's interior. There aren't as many small details or interesting technologies found in the XF. Most of the attention on the interior, outside of the workmanship, is in the driver's seat and controls layout.

The driver's cockpit is well organized and designed to keep feet and hands within easy reach of controls at all times. This coincides with the driving focus of the XF in general, another Jaguar hallmark.

For passengers, the interior of the 2018 Jaguar XF is hit-and-miss. Getting in and out is relatively easy thanks to wide-opening doors, low sills and high entries due to the aluminum construction. The doors can feel heavy, especially when being pulled from inside to close them. The optional soft-close door feature helps with this.

In the front seats, headroom is great and coincides with the commodious leg and shoulder room. In the back seats things are little tighter, but not so much that it will be noticed by any but the tallest folks. Three across is realistic in the standard model, but the all-wheel drive models have a larger tunnel hump that impedes legroom for the center seat.

In the rear, cargo space is huge in the Jaguar XF. The sedan has one of the largest trunks in the market, being wide and deep with a pass-through for long, narrow items. Rear seats fold down for more stuff. In the Sportbrake, cargo is even larger, on par with most small crossovers. 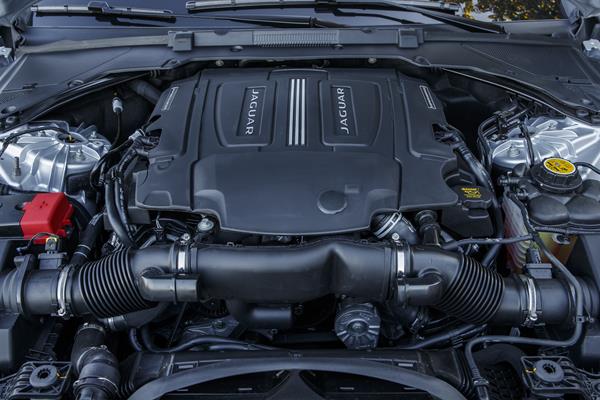 Probably the weakest point in the 2018 XF is in infotainment. The Jaguar system is very easy to use, but much of that comes from it being simple and not capable of a lot of the things more savvy users will expect. The base screen is an 8-inch screen that controls audio and Bluetooth functions with few other built-ins. The upgrade is to a crisp 12-inch screen with a great layout and good design that adds navigation and some extended connectivity.

The larger screen brings with it a sound system upgrade to go with the navigation. A proprietary Jaguar app allows some smartphone integration for either Android or Apple phones, but is limited in use. The navigation's prompts, by default, are voiced by a nice British woman, but can be choppy and late to the ballgame, causing missed turns.

Two of the four engines offered for the 2018 Jaguar XF offer some of the best fuel economy in the class. The other two are not as fuel efficient as some options, but are aimed toward sport performance instead. 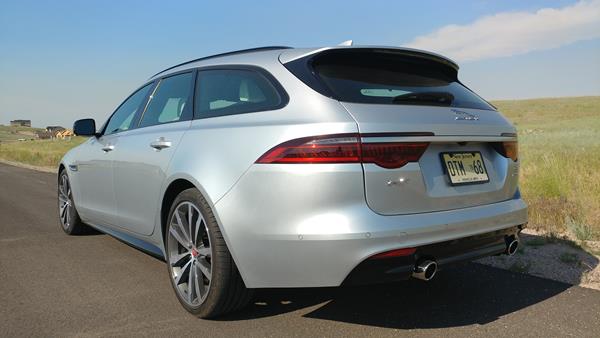 The 2018 Jaguar XF received a "The Rest" rating from the J.D. Power and Associates Vehicle Dependability Study, which is below average. It's also had three recalls so far, all for serious items like airbags, the fuel system and the instrument panel's electrical system.

The Jaguar XF has not been subjected to crash testing, as of this writing. Neither the National Highway Traffic Safety Administration nor the Insurance Institute for Highway Safety have rated the vehicle. Because of this, our safety rating is based entirely on the expected safety (via construction) and included safety items on the vehicle.

Despite the lack of NHTSA and IIHS safety ratings, we give the 2018 Jaguar XF a good score for safety based on its included items and Jaguar's history of building well-constructed vehicles. In addition, the latest European NCAP crash testing gave the XF a high rating.

Powering the 2018 Jaguar XF are a choice of four engines, except in the S and Sportbrake models, which have one engine option only. The base model XF comes with a 2.0-liter four-cylinder engine that's turbocharged to produce 247 horsepower into a well-done automatic transmission.

The upgrade option from that engine is a diesel unit, which produces 180 horsepower and slightly slower acceleration in return for better fuel economy in the city.

Two six-cylinder engine options are available for the Jaguar XF. Most models can be upgraded to the supercharged V6 that offers 340 horses, while the S and Sportbrake models use an even more powerful 380 hp version of that V6. These six-cylinder engines can equal most eight-cylinder options from rivals, in terms of sportiness and capability.

All of the XF's drivetrains pair to a very well-done chassis that offers a lot of comfort and great handling in the curves. This is especially true of the S models, which bring tighter roll through the turns. The Sportbrake is extremely well balanced compared to the sedan, and makes up for its slightly slower performance (heavier weight) with its superb balance and agility.

On the road, the 2018 XF won't beat track-tuned rivals, but it holds its own against any sporting sedan made for everyday drives. The eight-speed automatic in the Jaguar XF is beautifully tuned for the car. Braking is equally well done.

The XF remains one of the more accessible Jaguar models on the road. Its base price is very amenable considering the strong suite of excellence it brings. In the middle road, with a couple of desirable packages added on and the small price paid to upgrade to a diesel engine, the XF becomes a well-heeled road goer that meets budgets nicely.

Going to the supercharged sixes, buyers are better off jumping straight up to the S or Sportbrake for their added power and resale values. The latter also offers more practicality. 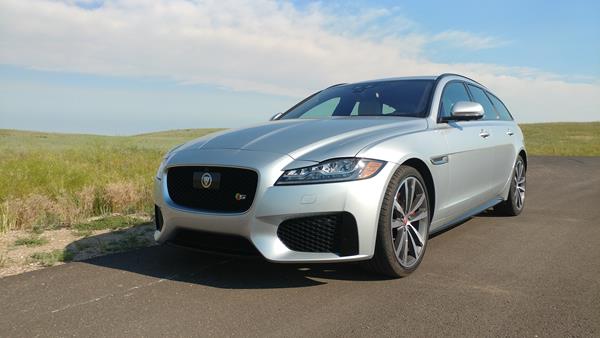 Competitors of the 2018 Jaguar XF are hard to beat. The Audi A6 is a sedan that is bested only by its BMW 5 Series rival and the excellent Mercedes-Benz E-Class.

However, the XF Sportbrake model has few competitors in the American market and should be considered separately for those who enjoy a well-done estate. As a sedan, the XF is only competitive against the other European offerings because of its price.

Yet that price plus the shooting brake option in the Sportbrake make the 2018 XF a very good choice for luxury buyers. The XF checks most boxes and is always a joy to drive. Its sleek look and well-heeled appeal are also good reasons to enjoy the XF without remorse. Our favorite is the XF Sportbrake for its excellent balance, useful roominess, and solid driveability.