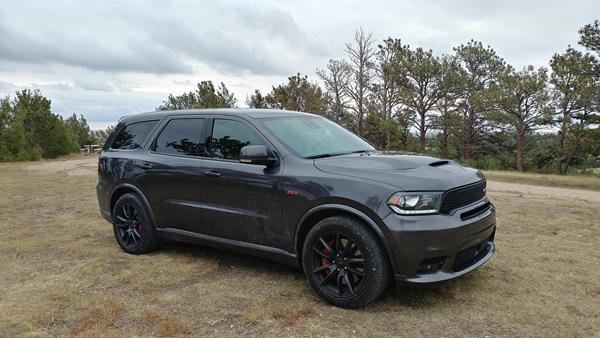 The 2018 Dodge Durango is spacious, comfortable and versatile. There are both daily use options and muscular options, allowing for the mundane and the indulgent to have their wishes. Beyond its uniquely bold and powerful look, the Durango has a soft spot for kids too.

For 2018, the Durango carries forward from the 2017 model year with a new, more muscular variant, a couple of new standard features, and the already popular blackout options. A new hood for performance models, and several infotainment technologies and a rearview camera are now standard on the Durango in all trims.

The 2018 Durango seats up to eight people, tows more than most SUVs in its class, and has plenty of room for both people and gear. Whether you need V6 efficiency with family hauling and good looks, or power and muscle, there's a Durango that probably fits. 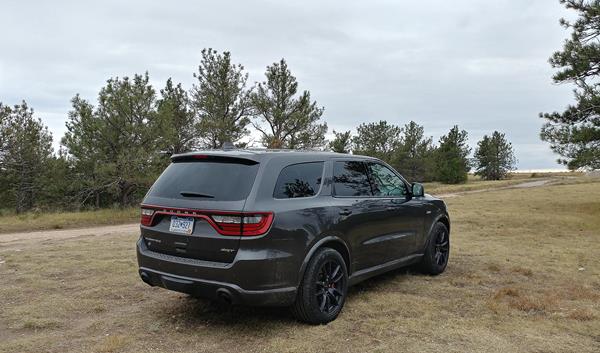 Outside, the Dodge Durango is muscular and ready for business in a sleek, very American way. The Durango has been around in this iteration for about six years, but a few refinements and package-level changes make the exterior uniquely Dodge.

The standard models of the 2018 Durango feature a wide grille set in a truck-like front fascia, with a large bumper and wide headlamps. The hood lifts off of that grille to flatten out at a slight incline up to the windscreen above. A heavy intake flanked by angular fog lamps finishes the Durango's front end.

Bodywork on the 2018 Dodge Durango is simple but well done, with a hard carve at the bottom of the doors to denote running boards and edges on the fenders to give an indication of muscle. The square body of the Durango is edges with curves and off-end angles to nicely offset the box-like design at its core.

The Durango might sit on a carlike unibody chassis, but it's very sport utility in its look with a truck-like feel to its design.

Several features - most notably the hood, lower body edges, brakes and wheel options - change with the Durango's packaging. Performance models such as the R/T and the SRT have a much more aggressive hood, with slots and cutouts meant to enhance airflow over larger engines and give the Durango a much more powerful, aggressive look. Conversely, the Citadel model adds extra bling to the Durango's trim, such as window edges and side mirrors that give a more luxuriously upscale appearance. 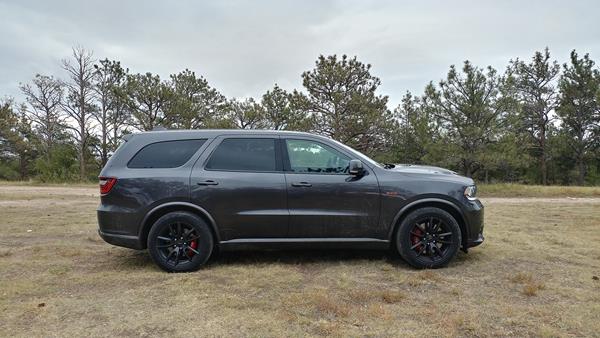 The 2018 Durango has seating for up to seven, with most packages seating six as standard. The third row in the Durango only seats two, but it seats them comfortably. Unlike most third rows, the Durango's seating there is adult-friendly and rivaled only by much boxier SUVs in this class.

The second row seating can be either a bench (holding three) or two captain's chairs. Entry and egress is simple whatever the second row is, as the rear doors open wide and seat tilting is easily done with the pull of a lever.

The design of the Durango's interior is top shelf with high quality materials and a lot of attention to detail found throughout. Some competitors might have better family ergonomics or more provision for gadgets, but the Durango offers a well-done, versatile interior that focuses primarily on everyday usefulness and comfort. It's by far one of the roomiest vehicles you'll find in any segment.

Visibility for the driver is very good. Large side mirrors are a good start, and the big greenhouse all around and the angles cut into the rear pillars allow for good visibility through the windows.

The dashboard and instrument cluster is well defined and nicely positioned. The front seating in the 2018 Durango features good bolstering at the base points and even better bolsters in the sportier variants. Standard models have a white-on-black cluster with good contrast for visibility and large gauges for easy use. Performance models have red added to the mix.

For utility, the 2018 Dodge Durango offers 84.5 cubic feet of cargo space when both the second and third rows are folded. That's massive and useful, thanks to a flat floor and easy access from the large rear tailgate. The variable folding seating configurations mean that several cargo options are available, including the ability to carry full lengths of lumber and four passengers.

All models of the 2018 Durango include a touchscreen infotainment system with Apple CarPlay and Android Auto. The smaller screen option includes Bluetooth connectivity and HD radio. The upgraded system uses a larger screen with better audio and more app connectivity. A WiFi hotspot is also an option, as is navigation and speech-to-text messaging.

The Uconnect system that powers the infotainment in the Durango is one of the best in the business, with fast responses, big and clear screen output, and a fast learning curve. Optional driver's aids like blind-spot monitoring, emergency braking and more are also available, depending on package and trim option chosen. 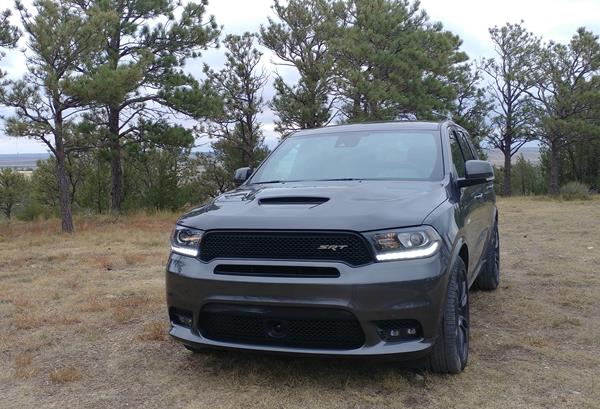 The RWD versions with the 5.7-liter V8 are rated at 17 mpg combined, with 14 mpg in the city and 22 on the highway. The AWD models are rated the same.

Last year our drive in the V6-powered Durango found those estimates to be close to reality and we believe most drivers will get at or near the EPA estimates for the AWD model in that configuration. For 2018 the V8 models were driven and while the 5.7L lived up to expectation for fuel economy, the SRT model was below the expected estimate. Likely because of the performance driving the engine begs the driver to undertake.

As of this writing, there are no expected reliability reports for the 2018 Durango. We do not expect them to change from last year, as the model has not received significant upgrades. The 2017 Durango was rated as a "7" in our scoring with an "About Average" score on the J.D. Power and Associates Vehicle Dependability Study.

The 2018 Durango, as of this writing, has not received safety scores from crash testing from either the National Highway Traffic Safety Administration (NHTSA) or the Insurance Institute for Highway Safety (IIHS). Because the vehicle has not changed from 2017, we are basing our scoring here on those scores with the expectation that they are not likely to significantly change.

The 2017 Durango received four out of five stars from the NHTSA for overall crashworthiness and the IIHS gave the 2017 model Durango top scores of "Good" on all published test results except for the driver-side, small-overlap front test, for which the DUrango received a "Marginal" score. 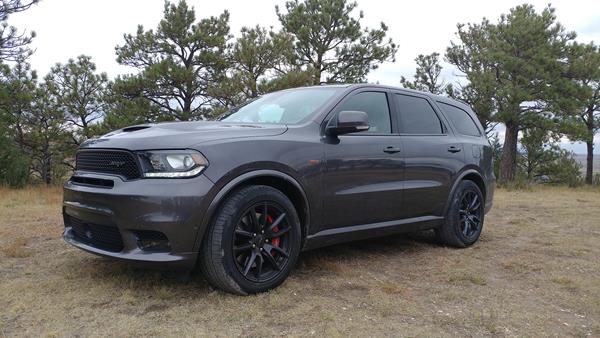 The base model 2018 Dodge Durango comes with a 3.6-liter V6 that has been used and loved throughout the Chrysler-Dodge-Jeep lineup. Outputting 293 horsepower and 260 pound-feet of torque in the Durango, it has an eight-speed automatic transmission as standard. Rear-wheel drive is standard and all-wheel drive is optional.

The V6 is not heavily powered in comparison to the Durango's large size and capability, but it never feels sluggish or weak in this crossover-SUV. It's a well-matched drivetrain for the Durango and does well as the everyday, fuel-efficient option for the vehicle.

The R/T model has a 5.7-liter V8 that outputs 360 horses and 390 lb-ft. Sport tuning in the suspension, steering and transmission are given in this model. The transmission is still the eight-speed auto and rear-wheel drive is still the standard as well. AWD is an option. The same engine and transmission are also available as an option in the Citadel model. This engine has plenty of output and a good amount of force for the Durango, making for a great sport model that isn't so over the top as to become an expense.

The new SRT model of the 2018 Durango has the performance arm's 6.4-liter V8, also found in other SRT models like the Dodge Charger and Challenger. This engine is mated to another version of that eight-speed auto trans. The engine produces 475 horsepower and 470 pound-feet of torque with all-wheel drive as standard. Several changes were made to this model's suspension and steering, including an adaptive suspension system for better handling in performance and an electronically-controlled, limited-slip differential. The infotainment system in the SRT model also comes standard with the SRT Performance Pages apps for timing and performance marking.

Driving both the R/T and SRT models, there is a noticeable difference in power output and muscularity. The R/T model has a solid performance band and plenty of V8 shake for good times, but the SRT adds more tire screeching and a ridiculously fun appeal to that. Both are very good for the performance-oriented who still need a family hauling machine.

The price of entry for the lowest-end SXT model of the Durango is at the bottom of the segment, but has little in the way of return. Aimed toward fleets who want a bare bones vehicle, the base model SXT has little consumer interest. Most will buy in the GT or R/T trims with better return, with a lot of value to be had for the price paid compared to similarly equipped rivals. Resale in the Durango is also good traditionally, especially in AWD models.

Top end models are much more spendy and rarely have an obvious return for their investment. The Citadel, SRT and (often) R/T trims can be very expensive and price comparable to some luxury options. However, there are few comparables to them, when it comes to their combination of power, performance and amenities. 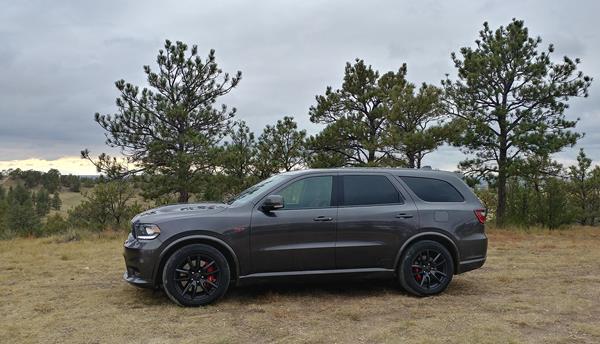 There are a lot of options in the three-row crossover-SUV segment, but few direct competitors to the Durango. The V6-powered models are comparable to crossovers like the Honda Pilot with its excellent interior and reputation for excellence. V8-powered models of the Durango are comparable to the Chevrolet Traverse and other more SUV-like options that offer similar power delivery and interior roominess. None can compare to the Durango's R/T and SRT performance models, and even better-selling family oriented models like the Pilot or Toyota Highlander are seeing a lot of heavy competition from the excellent Durango.

The 2018 Dodge Durango is a solid entry with enough versatility that any family will be happy with it. Some gear heads will love the muscle and performance offered in V8-powered trims. The Durango is sometimes overlooked for its versatility and all-around excellence, but it shouldn't be.