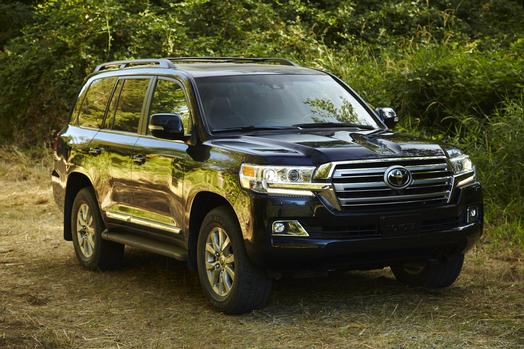 The Toyota Land Cruiser entered a new generation last year as an all-new rendering of what's now Toyota's longest-running model brand. The Land Cruiser was introduced in 1951 and has seen various iterations since, building on a strong reputation for durability and go-anywhere reliability.

With the all-new model for the 2016 model year, the 2017 Land Cruiser continues forward with no significant changes. Upgrades last year included new exterior styling, a new transmission and a lot of safety technology. The modern Land Cruiser is a more plush, mannered drive compared to its rough-and-tumble predecessors, but it retains their legendary capability.

The Land Cruiser is not a low-cost vehicle, but rivals many luxury makes for its interior accouterments and excellent ride quality. With a muscular but well-mannered V8 under the hood, and a strong personality for family friendliness and get-anywhere options, the 2017 Land Cruiser is an excellent choice if you need luxurious capability and muscle, but aren't interested in the premium-branded Lexus LX, the Land Cruiser's twin.


What We Love About the 2017 Toyota Land Cruiser:


What We Don't Love About the 2017 Toyota Land Cruiser: 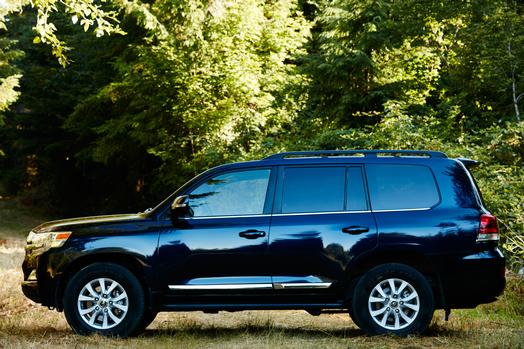 A new design for 2016 brought the Land Cruiser forward to match other similar Toyota vehicles, such as the Toyota Sequoia and Lexus GX. The exterior is much more contemporary to today's market. Compared to the Sequoia and GX, the new Land Cruiser still retains a more robust and muscular front fascia with a larger grille, more squared fender line, and a higher ride and stance.

The design goal of the 2017 Toyota Land Cruiser is a vehicle that's comfortable both on the road and hauling the family to the theater, and off the road, climbing through the wilderness. It's achieved with the high-riding stance and muscular appeal of the Land Cruiser, alongside its smoothed edges and less box-like exterior.

The 2017 Land Cruiser is handsome in that it's both rugged and refined.

Opening the door of the 2017 Land Cruiser exposes a well-designed cabin made of quality materials. The front seats are comfortable, very adjustable and nicely upholstered. Leather is standing, as is seat heating. The driver's cockpit design is well done with a good layout and most controls within easy reach.

The second row of seating is almost equally as comfortable as the first, with a standard 40/20/40 split-fold and slide/recline. Outboard seat heating is also standard for the Land Cruiser.

The third row is very different from the two forward rows. The seats fold up and to the side in the cargo area and lower down and up when set in place. These seats are wide and accommodating in shoulder and hip room, but are set low, which compromises legroom and knee angles. Headroom is good in the third row, but adults will likely not feel comfortable for long. 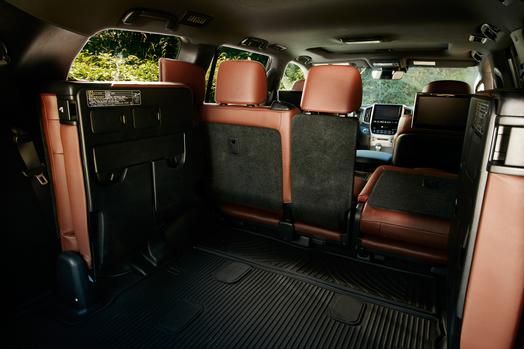 Because of the third row's fold-up position, cargo space in the 2017 Toyota Land Cruiser is a bit limited compared to most full-size rivals. We like the dual-opening tailgate, where the upper portion opens like any tailgate, but leaves a lower 18-inch (or so) lip for easier loading of smaller items that are best kept against the gate for stability. That lower gate drops to create a flat loading floor over the bumper, which is another nice feature. As with other Toyota vehicles, a separately opening rear glass is included with the Land Cruiser for another easy opening option.

Storage options and item placement in the Land Cruiser is very well done. Options include items like a refrigerator between the front seats in place of the large cargo bin, rear seat entertainment and multiple sun/moon roofs for a more open-air feeling.

Where the 2017 Land Cruiser misses the mark is with its interior's upscale appeal versus competitors. Most like-priced competitors are luxury-level and have interiors to match. In price point, the more upper-class Lexus LX570 has a better interior and similar price.

The 2017 Toyota Land Cruiser comes standard with a bevvy of technology included. That starts with the latest Entune software suite based on the 9-inch touchscreen. The screen is clear and crisp with good output. It features the large virtual buttons of the Entune infotainment interface. This user interface has come a long way in recent iterations, with a much better user experience than just a few years ago.

Built into the infotainment are Siri Eyes Free and useful apps, such as Yelp and Pandora, that integrate into most smartphones. Non-Apple users will be disappointed because no Android Auto is available, but the voice controls and other built-ins for Entune are well done and help make up for that. Most phones with a USB or Bluetooth connection can still sync some apps via the infotainment. Qi wireless charging is also standard in the Land Cruiser this year.

The rear seat infotainment package is standard in the 2017 Toyota Land Cruiser. Each screen is independent ,and can stream music from the stereo, a connected device (Bluetooth or USB) or video from the DVD player up front or a connected device. Plugs for audio-visual and HDMI are also included. 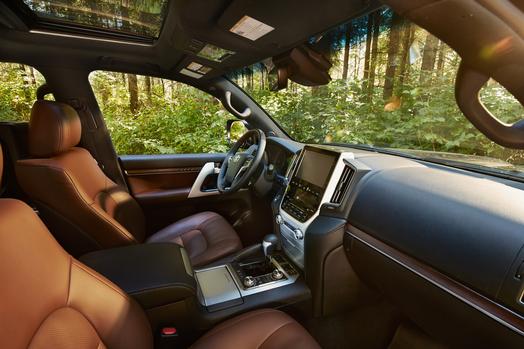 Buyers in the full-size sport utility market are rarely concerned with fuel economy. The cliché does hold in that regard, but the Land Cruiser is especially fuel-sucking compared to its rivals. The 2017 model is rated at 15 mpg combined, with 13 mpg in the city and 18 mpg on the highway.

Most of this sub-par fuel economy is thanks to the extremely robust off-pavement gear built into the Land Cruiser, as well as its insistence on full-time four wheel drive. Our averages in the Land Cruiser were lower than the EPA's expectation at about 13 mpg combined. We managed a point higher in the 2016 model year, so some variance may happen due to weather or altitude.

The predicted reliability expectation was difficult to gauge last year, as the 2016 model had not been rated as of our testing and publication. J.D. Power and Associates has published a Predicted Reliability rating for the 2017 Land Cruiser and rates it as "Above Average." That and the lack of recalls from the NHTSA has given us reason to bump up the scoring for the 2017 model year from 2016.

The 2017 Toyota Land Cruiser has not had safety data published by either the National Highway Traffic Safety Administration or the Insurance Institute for Highway Safety. It did not have crash test scores published last year, so the safety scoring is a best guess based on the SUV's design, standard safety features and bulk. 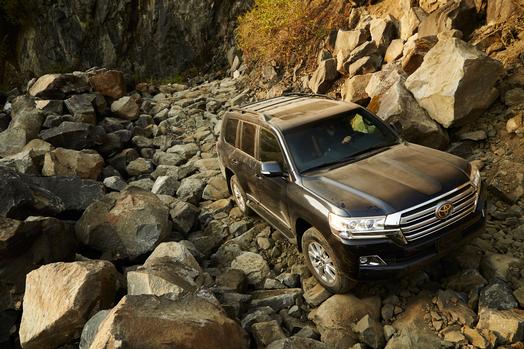 There is a lot to like about the design and powertrain performance of the 2017 Toyota Land Cruiser. It begins with a well-done 5.7-liter V8 that delivers 381 horsepower and 401 pound-feet of torque through a good band of RPM. This runs through an eight-speed automatic transmission that was new last year and its full-time four-wheel drive system. Towing is rated at 8,100 pounds.

Off-road equipment includes a lock center differential, a Kinetic Dynamic Suspension System that adjusts stabilizer bar stiffness for better wheel reach, Multi-Terrain Select for improved traction control in various situations, and an Off-Road Turn Assist that was introduced last year. This latter adds braking to the inside tires on a hard turn at lower speeds when offroad.

On the road, the 2017 Land Cruiser benefits from a nicely tuned suspension that adjusts to become forgiving and comfortable when on the highway. The truck-based nature of the Cruiser is felt when driving at lower speeds around town, but still manages to be mannered and somewhat maneuverable for such a bulky vehicle.

We like the Land Cruiser's robust engine with its muscular delivery when asked and its quiet nature when idling. It handles the bulk of the big SUV well and gives confidence in most situations.

There is no denying that the 2017 Toyota Land Cruiser is an expensive machine. It's also one of the most off-pavement capable vehicles available from the factory. The Land Cruiser comes with a host of standard equipment and plenty of room for the family and weekend warrior friends. Resale values are traditionally very high for this vehicle as well. 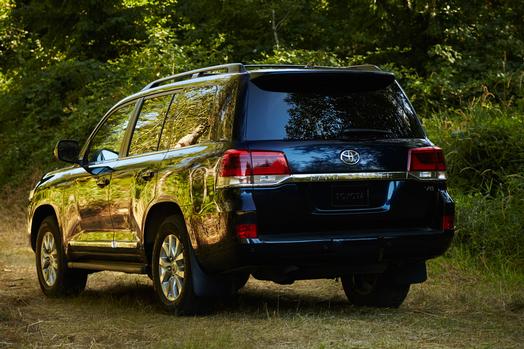 Most of the competition for the 2017 Toyota Land Cruiser is in the luxury vehicle segment. Toyota's own Lexus LX 570 is a direct competitor, though its price point is a bit higher and its body styling is a little more grille-centric. The Lexus GX 460 is also a competitor, but it's a tad smaller and doesn't include some of the off-road components found in the Cruiser. The Land Rover Discovery is a solid contender against the Land Cruiser and might have more appeal for its styling.

Outside of those competitors, there's nothing that compares to the 2017 Toyota Land Cruiser. It's the latest rendition of a storied machine that dates back into the 1950s as one of the most iconic off-road adventure vehicles in production.