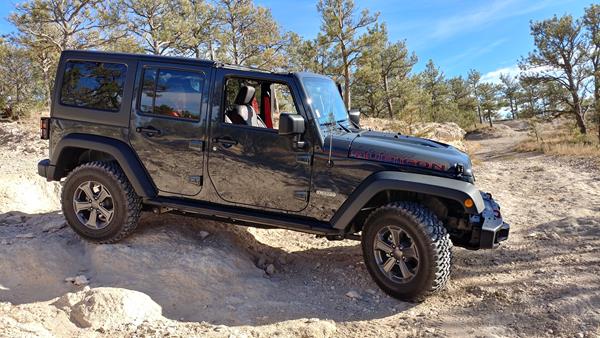 The Jeep Wrangler Unlimited is the four-door version of the Wrangler. Styling is largely the same, and anyone who thinks of Jeep is likely to think of a Wrangler Unlimited just as quickly as a standard Wrangler. This is literally the face of the Jeep brand. While sharing much in common with its standard two-door sibling, the Unlimited has several differences.

Like any Jeep, the Wrangler Unlimited is as trail capable as they come. It sets the benchmark for most SUVs when it comes to capability. The usual weaknesses and quirks associated with the Wrangler are there as well, but are more livable in the Unlimited thanks to its more versatile usefulness.

From the base model to the top-end Rubicon, the 2017 Jeep Wrangler Unlimited can find a fit with anyone who wants the most capable machine made.


What We Love About the 2017 Jeep Wrangler Unlimited:


What We Don't Love About the 2017 Jeep Wrangler Unlimited: 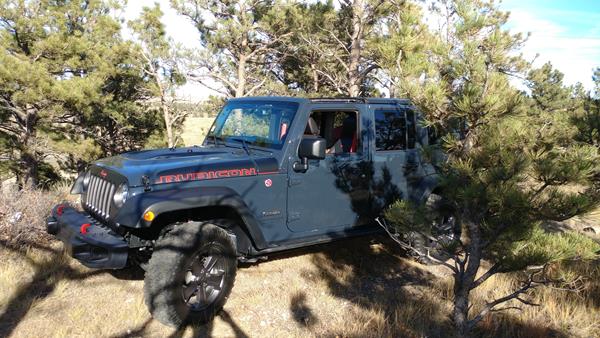 There is nothing mistakable about the Jeep Wrangler Unlimited's look. It's all Jeep and anyone looking at it will know that immediately. The Wrangler holds one of the most recognizable appearances in American automotive and the Unlimited keeps that look, adding only two more doors to the stretch. From the original Willys that hauled GIs through World War II to the 2017 model year Wrangler, there's no mistaking what they are.

The exterior hasn't changed a lot since the Wrangler was born back in the 1980s. Even then, it still resembled the legendary WWII machine designed by Willys.

What changes with the 2017 Wrangler Unlimited's exterior looks depends on the trim package. The Rubicon model has larger bumpers with a big front extension to accommodate an integrated winch (purchased after market). The Sahara model has less emphasized bumpers and a smoother hoodline (no intake cuts) for a sportier appearance.

Added for 2017 are some LED lighting packages for headlamps and fog lamps.

The overall appearance of the 2017 Jeep Wrangler is a box with a smaller box up front and some wheels added on. The Wrangler Unlimited extends the center box (body) to add two more doors for rear seating and a resulting larger cargo area. Exposed door hinges, big door handles with push-button latch releases, an obviously removable roof (whether hardtop or soft), and body parts that appear to be easy to remove for repair or swapping are all part and parcel of the Jeep Wrangler look.

Like all Jeep Wrangler models, the 2017 Jeep Wrangler Unlimited has a folding windscreen, removable doors and a full-sized, tailgate-mounted spare tire as standard equipment. 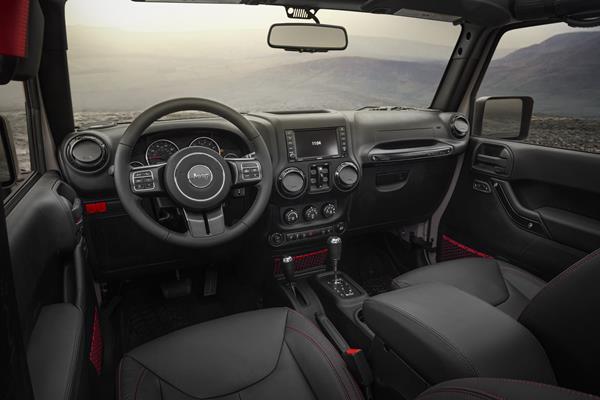 To get an idea of the comfort-level expectations that Jeep owners have, in 2017, air conditioning is still an option for the base model Wrangler. From there everything becomes a creature comfort that Jeep types will fully appreciate far more so than the average car owner whose base-level vehicle includes cruise control, A/C and fully adjustable seats.

There were a few additions to the 2017 Wrangler that do increase comfort inside the Unlimited model. The Cold Weather package now adds heated seats and remote starting capability to the Jeep, along with all-weather rubber mats. For Wrangler fans, that's a huge step up in terms of interior accouterments.

The best way to describe the interior of the Wrangler Unlimited is functional and durable. There's a lot going on with the Jeep's dashboard, but it all has a purpose. The grab bar across the passenger's side dash (lovingly referred to as the OMG bar) gives the front passenger something to grab onto when the going gets rough. The door controls for windows and locks are at the center of the dashboard rather than mounted on the doors, which eliminates the worry of them shorting out if water gets in through the (almost inevitable) seal leaks and "oops, windows were down when we hit that mud puddle" moments. These also minimize the amount of electricals to unplug when removing said doors.

The interior of the Wrangler Unlimited is comfortable enough for those who understand the purpose of the Jeep. It's not meant for long highway drives or for toting the kids to school and band practice. You can do those things, but it won't be the best option. Instead, the Jeep Wrangler Unlimited is meant for hauling four or five people out into the wilderness without anyone worrying about how to get there or whether the rig can handle the terrain.

Rear seating in the Wrangler Unlimited is its greatest addition over the standard Wrangler models. It's comfortable and accessible and, most of all, is a huge step up from the church pews that makeup the rear bench in standard Jeep Wrangler models. What's more, the additional doors and floor space added for that second row of seating mean that the cargo area is now fully accessible without removing the bench. There's nearly three times as much cargo space in the Wrangler Unlimited compared to what's found in the standard two-door model. A huge benefit.

The 2017 Jeep Wrangler Unlimited has infotainment options straight out of the 1990s. At least, that's what it feels like. The old school Uconnect screen has about as much graphic output as an Atari console did back in the day when people knew what "CGA" meant when referring to a computer screen.

The tiny 6.5-inch screen has a confusing interface and not much in the way of infotainment. What it does have is functional stereo output, Bluetooth for your phone and a flip-out face that exposes a CD player.

Somehow the limited electronics in the Wrangler seem to fit the heavily mechanical machine that this Jeep is. So it's not all bad. Jeep has promised that the next-generation Wrangler will be on par with current tech and will likely be adding their latest-generation Uconnect system, which is the best in the business. 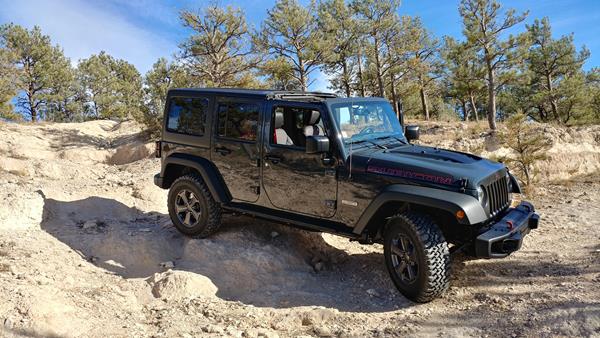 As intended, the 2017 Jeep Wrangler Unlimited is a vehicle made for serious off-road adventures and four-wheel drive excellence. Knowing that, fuel economy is a little less important to buyers. With the Unlimited model, the extra seats and added room mean that this Jeep is more practical than is its two-door siblings. Some might think mpg ratings are a bit more important. But we doubt it.

The 2017 Wrangler Unlimited has an EPA rating of 16 mpg in the city and 21 mpg on the highway. That's a slightly lower score than the standard Wrangler, but not by much.

In the real world, our Wrangler Rubicon Unlimited model managed to average 14 mpg overall. That's about what we received in the standard Wrangler Rubicon, so this is likely what most buyers can expect in average fuel economy returns.

The 2017 Jeep Wrangler Unlimited does not have current reliability ratings from J.D. Power and Associates, but because it's largely unchanged from previous model years, we can assume those ratings will carry forward and it will be about average for the segment in terms of reliability and dependability.

Like the Wrangler model, the Wrangler Unlimited is not terribly well considered when it comes to safety. The only test completed and published by the National Highway Traffic Safety Administration (NHTSA) was the rollover strength test, which gave the Wrangler a mere three out of five stars.

The Insurance Institute for Highway Safety (IIHS) rates the Wrangler with a best "Good" score for moderate overlap front test results and a second-worse "Marginal" for small overlap and rear crash test results. The Wrangler received a lowest "Poor" rating for side impacts.

Although the term performance evokes images of tire burnouts and race cars going neck-and-neck into a corner, the Wrangler Unlimited has a very different level of performance. It won't win races. At least not on the road. But if the race involves mud, rocks and river fording, the Jeep is probably a shoe-in for the checkered flag.

The Wrangler Unlimited shares a powerplant and underpinnings with the standard Wrangler models. A 3.6-liter V6 engine powers the rig with 285 horsepower and 260 pound-feet of torque. Torque is then multiplied several times over by the transmission, transfer case, differentials, etc. Towing in the Wrangler Unlimited is rated at a fairly impressive 3,500 pounds due to its longer frame.

On the pavement, the Wrangler is out of its element. The Unlimited is a little more palatable than its two-door sibling as a highway drive and get-around-town machine due to the longer wheelbase, giving a little more stability.

Off the pavement, though, there is no rival to the 2017 Jeep Wrangler Unlimited for taking the entire family out into the great unknown without caring about any obstacles that might attempt to block the way. 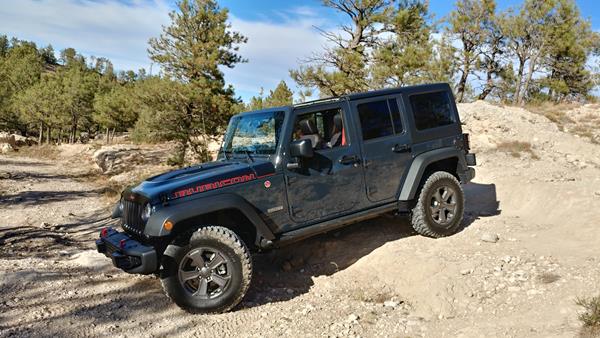 The 2017 Wrangler Unlimited is a fairly expensive vehicle compared to other SUV options, but when compared to similar off-pavement-ready machines, it's a bargain. Because the Wrangler has no limits and its Unlimited model is one of the more popular options for its extra interior space, resale values are also very good for these Jeeps.

This value retention and the overall best-in-class properties of the Jeep Wrangler mean that it's likely a great bargain for anyone who knows what this Jeep is for and intends to use it that way.

Direct competition for the 2017 Jeep Wrangler Unlimited is not really to be found in the market. Similar options for off-road capability are either pickup trucks or expensive luxury rigs. Its greatest rival is likely the standard Wrangler and, perhaps, the extremely capable Toyota 4Runner TRD Pro edition. With the former, two seats and limited cargo are the problem. With the latter, the Jeep in its comparable Rubicon package is more capable than is the 4Runner. Plus nothing beats that Jeep look for a Jeep enthusiast.

If used for its intended purpose, the 2017 Jeep Wrangler Unlimited is a great machine with a solid reputation and iconic background. The four-door Unlimited means that the whole family or all your friends can come along without losing cargo space or practicing yoga to get into the Jeep.