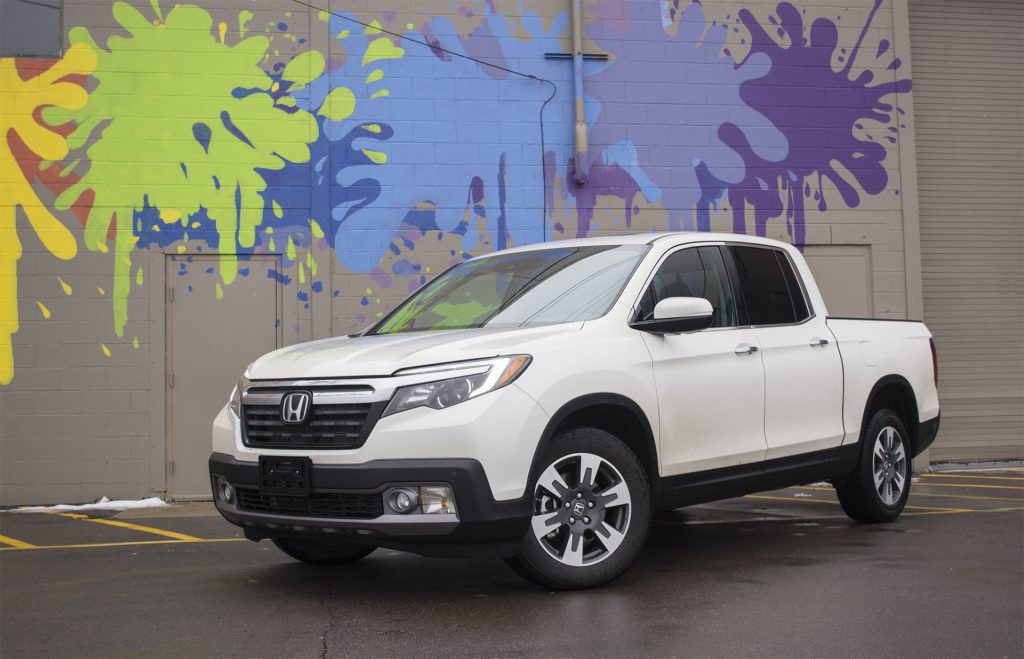 When is a truck not a truck? A bit of an odd question, but one we find ourselves asking with the Honda Ridgeline. When the first-generation model was introduced in 2005, it was a unique entrant in the midsize truck class.

Unlike most competitors that used a body-on-frame platform, Honda went with a unibody layout. This caused many truck fans to say the Ridgeline wasn't a real truck because it couldn't tow or haul as much as a regular truck. But those who went for it loved how the Ridgeline offered most of the capability of a truck, while bringing some clever ideas and balanced performance.

For 2017 Honda introduced the second-generation Ridgeline. The model became more truck-like in looks and capability. But it would retain a number of features that many owners of the previous model loved.


What We Love About the 2017 Honda Ridgeline:


What We Don't Love About the 2017 Honda Ridgeline: 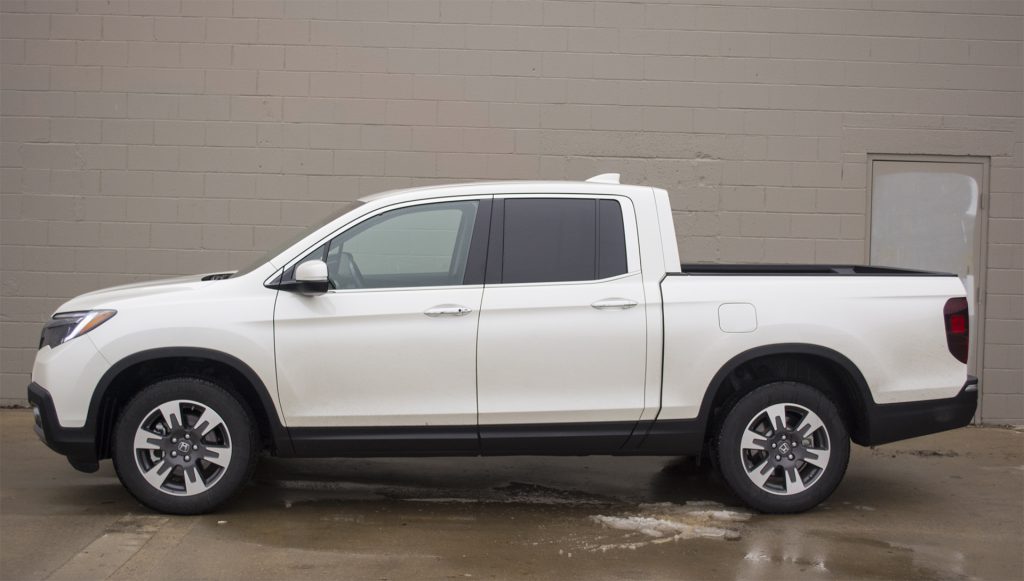 The first-generation Honda Ridgeline looked more like a futuristic concept truck than an actual pickup. A boxy shape with clean lines and no gap between the truck bed and cab left a lot of people questioning whether it was a truck or not. Honda has addressed this with the second-generation Ridgeline. Park it next to other pickups and it will not look out of place. The Ridgeline adopts the standard truck design of a cab and bed, including the illusion of a seam between the cab and bed.

The front is where people will decide if they like or hate the Ridgeline's design. A sculpted hood, large headlights, massive grille, long chrome bar and meaty bumper make it up. To our eyes, it doesn't fully mesh. Maybe if the grille was a little bit wider and headlights shrunk down slightly, it might make a difference.

One area that Honda has done quite well is the Ridgeline's bed. For starters, Honda has added four inches to the bed length, making it the longest standard bed in the midsize truck class. However, you cannot option a longer bed like you can on other midsize trucks. The Ridgeline's bed is the only one in the class that can fit 4-by-8-foot sheets of plywood or other material between the wheel wells.

There are also some cool ideas Honda has brought into the Ridgeline. First is the dual-action tailgate that can open downward or to the side. Second is the in-bed trunk that offers 7.3 cubic feet of space where you can stow tools or bags. The trunk also has a drain plug so you can use the trunk as a cooler. 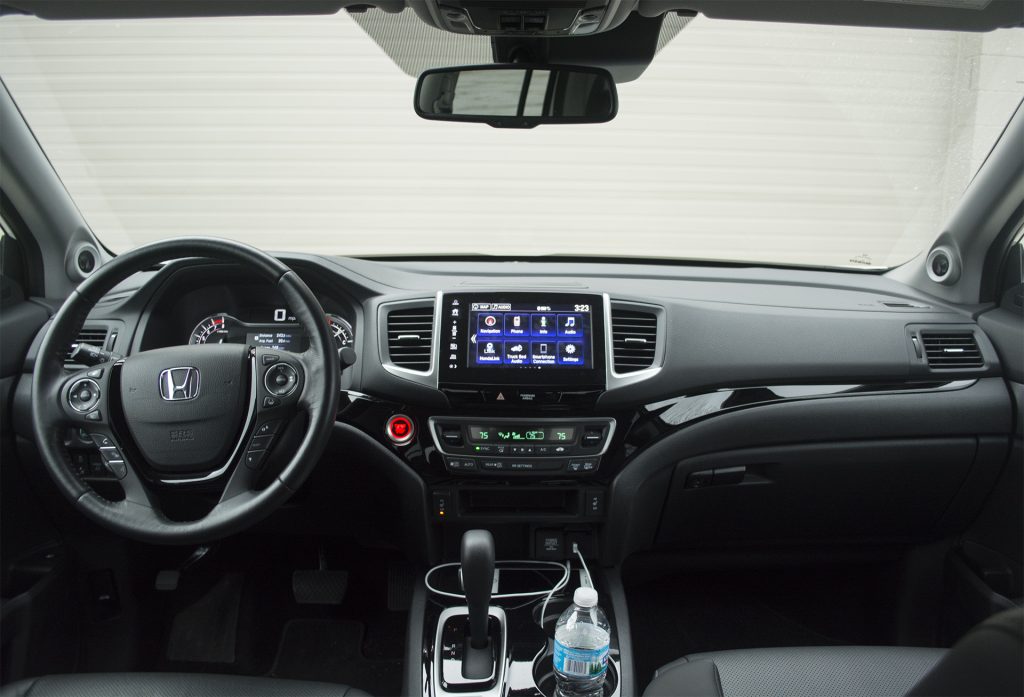 If you are still under the belief that pickup truck interiors are crude and lack luxury, then the Honda Ridgeline will change your perception very quickly. The interior looks to be lifted from the Accord sedan, which isn't a bad thing. Overall ergonomics and layout are at the top of the class. Material quality is high as well, with plenty of soft-touch plastics.

The Ridgeline comes standard with cloth upholstery, but our tester featured the optional leather upholstery and heated front seats. Finding a comfortable position is not hard thanks to power adjustments for the seats and a tilt-telescoping steering wheel for the driver. The seats provide excellent long-distance comfort. We drove to Northern Michigan for the holidays and did not feel tired once we arrived at our destination. The back seat is comfortable for most people thanks to a large amount of head and legroom.

The one area Honda falls on its face with the Ridgeline is the technology. The 8-inch touchscreen with the HondaLink infotainment system is frustrating. The interface is confusing to understand, and even simple tasks, such as scrolling for a particular podcast episode, take a few extra steps than they should.

Not helping are the touch-sensitive controls for the volume and other functions that seem to be hit and miss when it comes to responding. They are also difficult to use while on the move. You can alleviate some of the issues with Honda's infotainment system by plugging in your iPhone or Android smartphone and using CarPlay or Android Auto. But note that Apple CarPlay and Android Auto compatibility is only available on the Ridgeline RTL-T and above. 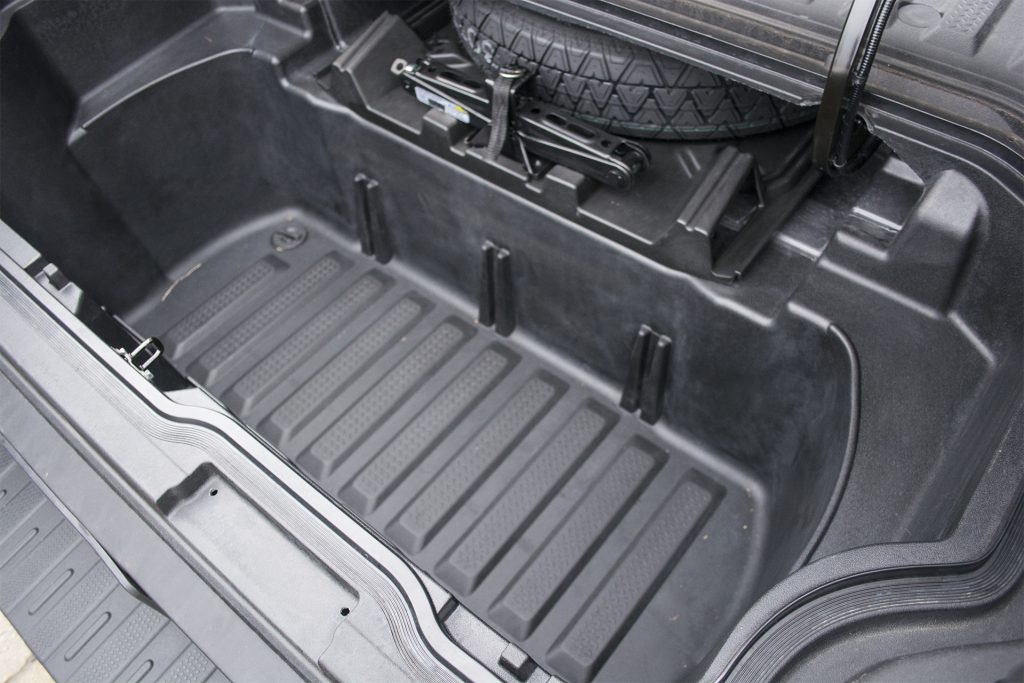 EPA fuel economy figures for the 2017 Honda Ridgeline stand at 19 City/26 Highway/22 Combined for the front-wheel drive version and 18/25/21 for the all-wheel drive variant. We averaged 23.6 mpg during our week, which consisted mostly of highway and long distance driving.

At the moment, reliability data is currently being gathered for the 2017 Honda Ridgeline. But we would expect the Ridgeline to have a good reliability record since Honda as a whole does very well in those studies. In J.D. Power's Initial Quality Study, the 2017 Ridgeline got an average rating. 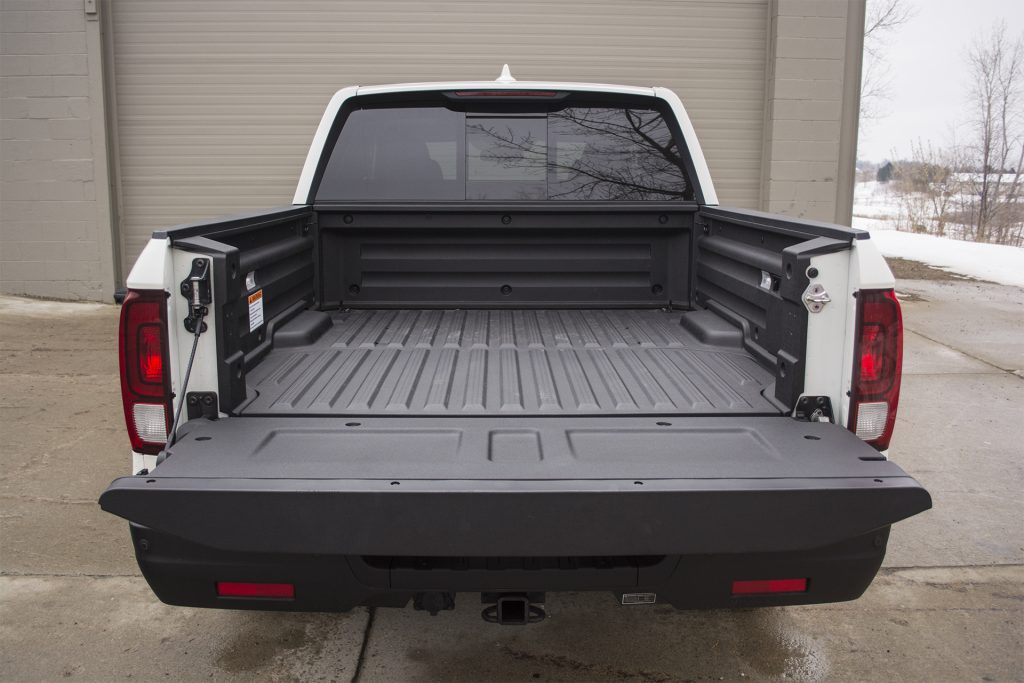 The Ridgeline comes packed with safety features such as antilock brakes, a full complement of airbags, stability control, traction control, daytime running lights and a backup camera. Disappointingly, if you want such features such as blind spot monitoring, rear cross-traffic alert, forward collision warning and automatic high beams, you need to step up to either the RTL-E or Black Edition - the highest trims in the Ridgeline lineup. It would be awesome if Honda made those features available as an option on the lower trims. RTL-E and Black Edition models also get adaptive cruise control, lane keeping assistance, road departure mitigation and forward collision warning with collision mitigation braking.

At the time of this writing, neither the National Highway Traffic Safety Administration or Insurance Institute for Highway Safety have crash tested the Ridgeline. 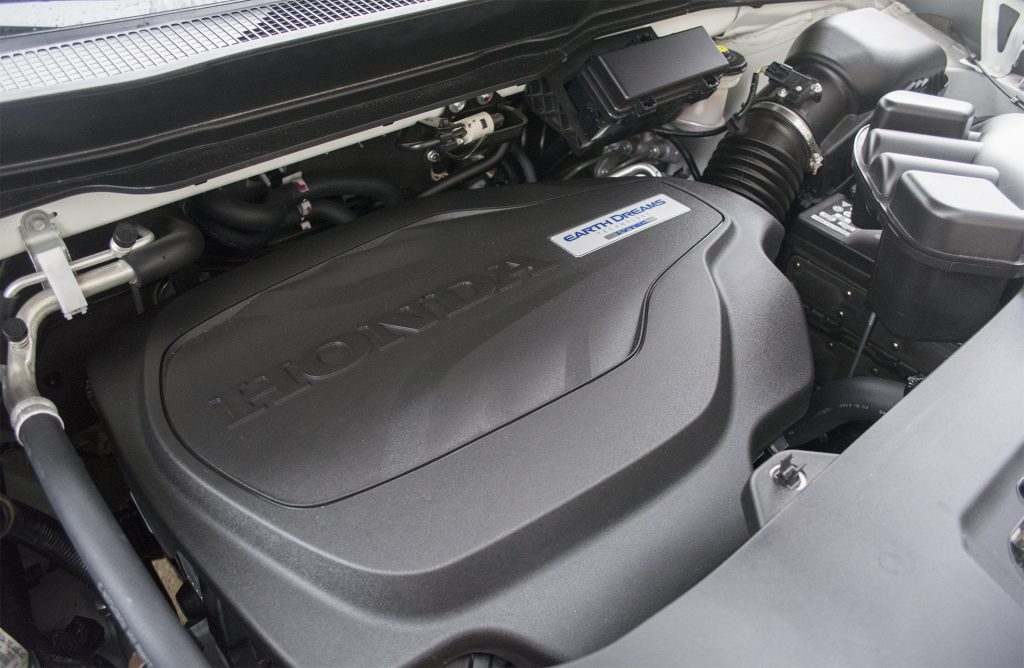 There is only one engine and transmission available for the Ridgeline: a 3.5L V6 paired with a 6-speed automatic. The V6 produces 280 horsepower and 262 pound-feet of torque. The base RT to the RTL-T come with the choice of either front-wheel or all-wheel drive. The RTL-E and Black Edition only get all-wheel drive.

The V6 in the Ridgeline is one of best engines in the midsize truck class. Power comes on immediately and never runs out of breath the higher you climb in the rev range. Making a pass or merging onto freeway will be no issue. The V6 is also quiet and refined during acceleration. The automatic transmission provides seamless gear changes.

Our Ridgeline tester was equipped with an all-wheel drive system that features Honda's Intelligent Variable Torque Management system. This system can quickly vary the amount of torque going to each wheel to improve handling and traction. The Ridgeline also comes with the Intelligent Traction Management system that varies a number of settings in the powertrain to match various conditions. We tried it out on an unplowed road and the Ridgeline was able to go through the deep snow with no issues.

Being a truck, you would expect the Ridgeline to have some decent numbers concerning payload and towing. Honda rates payload from 1,447 to 1,465 pounds depending on the trim. Max tow ratings are 3,500 pounds for the front-wheel drive model and 5,000 pounds for all-wheel drive. These numbers trail competitors by a wide margin. But if you only plan on towing something like an ATV, or hauling lumber and other building supplies, the Ridgeline can handle it.

No other midsize truck in the class comes close to matching the Ridgeline in terms of ride. Thanks to the unibody construction, the Ridgeline soaks up most bumps. Only big ones cause a slight kick to come inside. The steering needs a bit of tweaking. We found it to be too light for pickup and it exhibited some play - basically we could turn the wheel slightly and nothing would happen.

One area Honda doesn't need to tweak is noise isolation. Road and wind noise are kept to near silent levels, making this a perfect road trip companion. 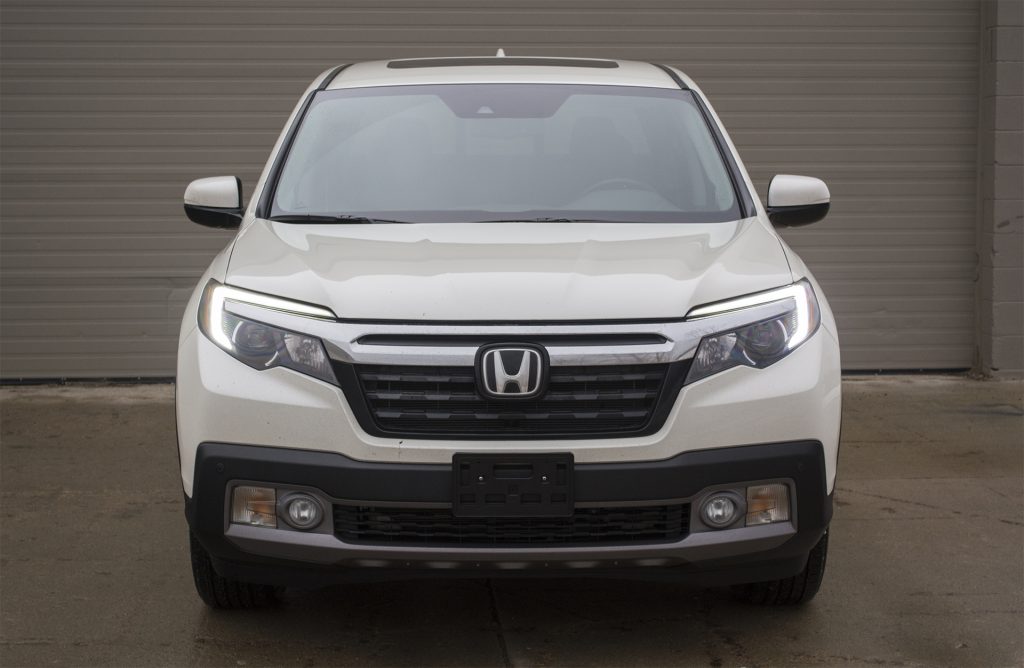 The 2017 Honda Ridgeline begins at $29,475 for the base RT front-wheel drive and climbs to $42,970 for the Black Edition. Our Ridgeline RTL-E tester came with an as-tested price of $42,270 with a $900 destination charge.This is about average for the current crop of top-line midsize trucks.

If you want the advanced safety features such automatic braking and lane keep assist, this is the least expensive way to do it with the Ridgeline. Otherwise we would direct you the RTL-T, which kicks off at $35,930. It comes with everything you want and need, such as Android Auto and Apple CarPlay compatibility, navigation, heated front seats, power adjustable front seats and a USB charging port for those sitting in the back. Plus you have the choice of either front- or all-wheel drive, which adds $1,900 to the price. 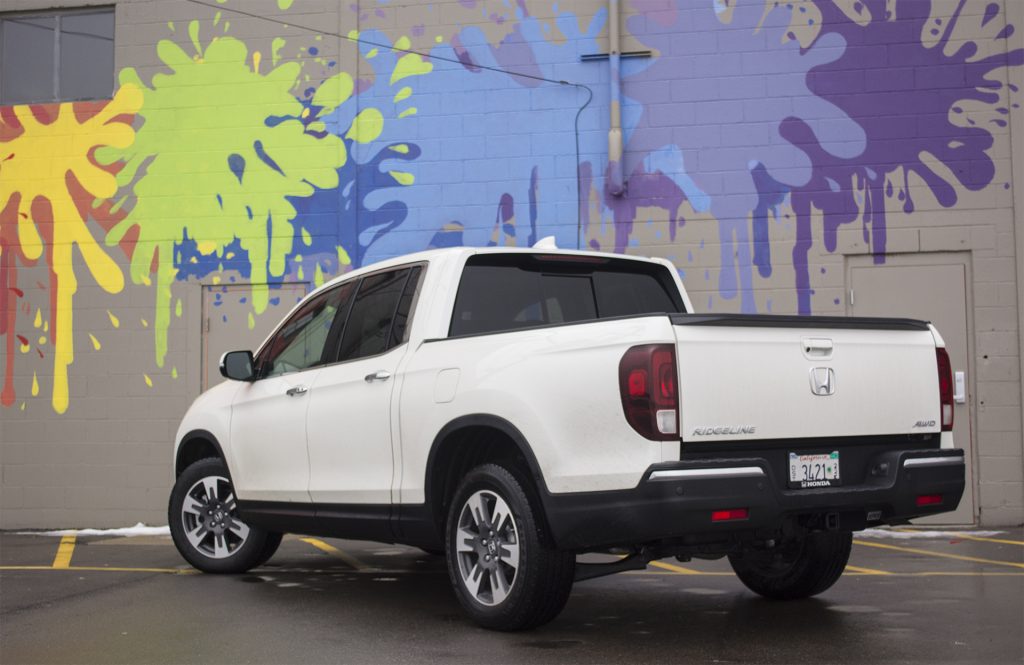 There is a midsize truck that will fit your needs. The Chevrolet Colorado and GMC Canyon are perfect for those who are planning to tow, as they offer best-in-class towing numbers. They are also the only models in the class to offer a diesel engine as an option, which helps in terms of improving fuel economy. The Toyota Tacoma is still the gold standard for off-road capability in the class. The Nissan Frontier is just as capable as the Tacoma but lags behind in terms of refinement and fuel economy.

The Ridgeline is definitely a truck. Truck fans may not agree because of its unibody platform and low numbers for towing and payload. But how many pickups are used to tow or haul stuff in the bed? Not as many as there were back 20 to 30 years ago. For most people who want a pickup but will only use the capabilities once in a while, the Ridgeline is a perfect choice. Having a few aces up its sleeve that very few models can match is an added bonus.