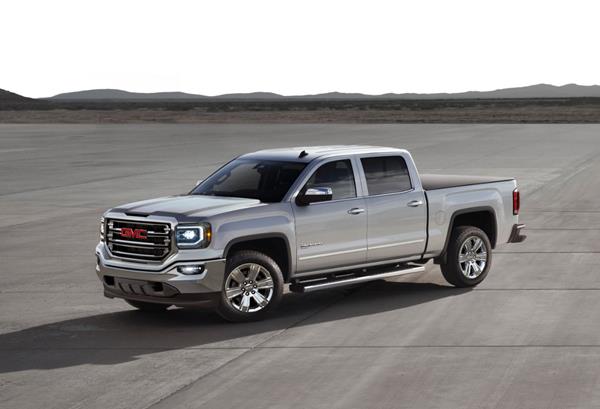 The GMC Sierra is offered as a more premium-level pickup whose base model has a bit more accouterments than competitors. There are four basic trim levels for the GMC Sierra, each of which upgrades the interior and some exterior options in turn. Several cab sizes, bed lengths and powertrain options are available for the 2017 GMC Sierra 1500.

The 2017 Sierra has not changed much from the 2016 model year. GMC added a capless filler on the fuel port, some driver safety technology options and active grille shutters for improved aerodynamics. The 2017 GMC Sierra 1500 retains its three engine choices and high levels of interior comfort -  both points that are often the selling point for this truck.

All three engines have good performance and all variants of the Sierra 1500 are comfortable workhorses that are well-rounded offerings in the full-size pickup truck market.

The new generation of the GMC pickup truck lineup has been a hit with buyers. The square-on-square design features squared corners on the grille, hood, fenders, greenhouse and more. These right angles build on one another, stacking at the fenders and grille and being emphasized by the hood and lower bezels. The Denali trim takes this a step further with squares inside the grille.

At the rear of the truck, bumper cutouts for steps and the tailgate itself are squared off, as are the tail lamps and GMC symbol within the tailgate's indent. Along the sides of the 2017 GMC Sierra 1500 are straight lines and right-angled elements that create more of this.

Individually, these elements sound like a lot of blocky ugliness in one package. But the whole comes together really well and makes for a solid, powerful look that is both robust and refined. 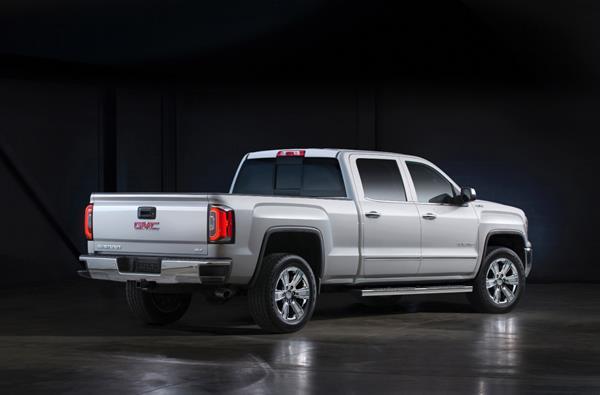 The premium-level build of the Sierra lineup's interiors are one of the things that set them apart from competitors. GMC models are generally more premium than average, which is part of the make's appeal and marketing. Roominess and quality are the goals here.

The lower-end trims, specifically the base and SLE models, are work-a-day rather than luxurious, but quality is still a hallmark. Especially when compared to the entry-level options from other nameplates.

Seating in the 2017 GMC Sierra 1500 is roomy and comfortable, even in the bench seat found in the base model's single-cab configuration. As trim levels increase, seating comfort follows with the topmost Denali trim offering massage units and a multitude of adjustment options for the front seats. Crew cab options bring huge rear seating as well, with plenty of room and storage options under and around.

Bumper steps for easier access to the cargo bed are standard on all GMC Sierra models and lighting options abound for both interior and cargo illumination. The rear seats in extended and crew cab models can be flipped up to gain more floor room or to store items under the seats before setting them back down for passengers to use.

The storage, placement, and usefulness of cubbies and compartments are very good in the 2017 Sierra 1500. Upgraded infotainment options bring extra USB plugs as well.

The standard 4.2-inch audio display in the base level 2017 Sierra 1500 is not very tech-laden, but it does have a leg up on the base offering in most other full-size trucks. Two USB ports and Bluetooth connectivity are standard.

The upgrade system, which is standard on upper trims, is GMC's IntelliLink infotainment on an 8-inch touchscreen. Graphics quality is good and crisp with easy menus and a fairly simple learning curve for most uses. Apple CarPlay and Android Auto are standard, as are navigation and HD/satellite radio.

Upgrading that expanded system can add OnStar and a WiFi hotspot option, as well as more app connectivity with connected smartphones. Five USB ports are then found throughout the GMC Sierra's cab. 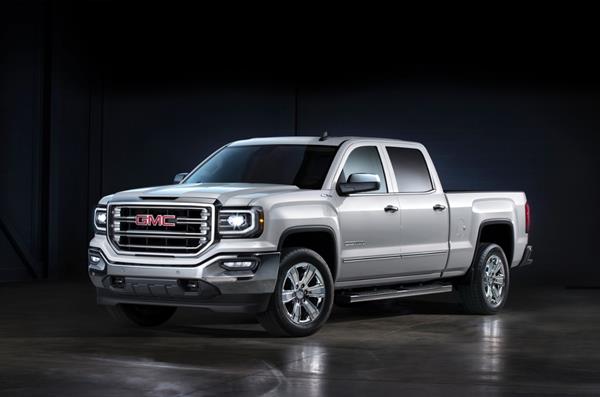 There are three engine options for the 2017 GMC Sierra 1500 and all three have good MPG estimates for their capability. These estimates translate to reality in our experience. Each engine is offered in both rear-wheel drive and 4-wheel drive drivetrains.

The top-level engine is a throaty 6.2-liter V8 that is EPA-rated for 17 mpg combined, with 15 mpg in the city and 21 mpg on the highway in both RWD and 4WD configurations. Driving this model in the Denali trim, we found those EPA estimates to be close to reality, with our average being about 17 mpg even after some towing tests were included.

The 2017 GMC Sierra 1500 has received a "Better Than Most" rating on the J.D. Power and Associates Vehicle Dependability Study, which mirrors its results for 2016. Last year saw several recalls for the Sierra models, but this year sees none as of this writing. Last year's recalls were not mechanical in nature and were issued early in the model year.

A standard 3-year/36,000-mile bumper-to-bumper warranty is standard for the Sierra and a 5-year/60,000-mile powertrain warranty is also standard.

Crash testing for the 2017 Sierra 1500 has given it good scores overall. The National Highway Traffic Safety Administration (NHTSA) has given the Sierra a 5-Star overall rating for its window sticker, with five-star crash test results (out of a possible five) on all tests except the rollover, which received four stars.

The Insurance Institute for Highway Safety (IIHS) gave the 2017 GMC Sierra 1500 a top score of "Good" on all of its crash tests except the small-overlap front-test result, which was a second-worst "Marginal." This is a common failure for full-size pickup trucks and sport utilities.

Plentiful amounts of standard safety features are found on the GMC Sierra and many high-tech driver aids and safety items can be added with option packages or trim upgrades, including low-speed automatic braking that was newly added this year.

The base 4.3-liter V6 found in the 2017 GMC Sierra 1500 is a good producer at 285 horsepower and 305 pound-feet of torque. A 6-speed automatic transmission is standard, as is rear-wheel drive. Four-wheel drive is optional. Towing is rated at up to 7,200 pounds, depending on configuration.

The SLT and Denali trims see the 5.3-liter V8 as standard equipment. This workhorse of an engine has been in the Sierra for years and performs very well. The 6-speed automatic found with this engine is also a staple for the truck. Output for the engine is 355 hp and 383 lb-ft of torque. Towing is rated at up to 11,200 pounds, depending on configuration. Our time with this configuration in 4WD found this V8 to be more than capable for towing, hauling and everyday use. Any struggles to get things moving were minimal.

The largest engine offered for the 2017 GMC Sierra 1500 is the 6.2-liter V8 that debuted in 2015. This engine runs through an 8-speed automatic transmission, which is largely responsible for the truck's excellent highway fuel economy with this engine. This 6.2L outputs 420 horses and 460 lb-ft of torque. All that muscle translates to a respectable 12,000 pounds of towing capability. The 6.2L is only available in the SLT and Denali trim levels. 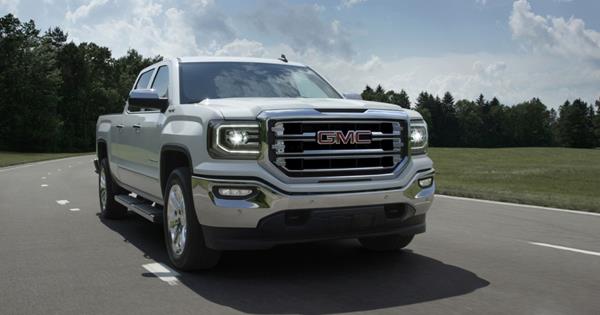 The 2017 Sierra 1500 is a premium-level truck, even at its base level, and thus is priced higher than its competitors base-model options. Resale values are decent for the market, even among its former fleet models. The Sierra is competitive at its middle level trims.

The second-up SLE trim does offer upgrade options not available for the base model, which differentiates that trim from the base model's more fleet and commercial aim. Many buyers will find this trim with some updates to be more than enough to get the job done with the 2017 GMC Sierra 1500. Especially with the 5.7L V8.

The SLT model is the most-purchased option for the GMC Sierra 1500 and is likely the best option for most consumers with its excellent array of accouterments versus price. Upgrades are easier to come by and the larger infotainment screen is already standard in this trim.

The highest trim point, the Denali, is largely reserved for those who want a luxury pickup truck option.

Today's market has a lot to choose from in the full-size pickup truck segments. Competing with the GMC Sierra 1500 are offerings that include the Ford F-150, Ram 1500 and fellow GM company Chevrolet Silverado. The Ford offers competitive models to the GMC Sierra's various trims in the F-150's top-level trim points. Fuel economy in the F-Series is often rated better, though real-world results are mixed. The Ram 1500 is similarly offered with higher-trim options that match what is available from GMC, with a generally better highway drive quality and towing capacity, but not fuel economy. GM's Chevrolet brand has the Silverado, which does have some overlap in trim offerings compared to the GMC.

This lineup of strong contenders still sees the 2017 GMC Sierra 1500 competing well. The excellent interior experience, strong fuel economy and nicely-rounded options are much of what set the GMC Sierra apart from others.