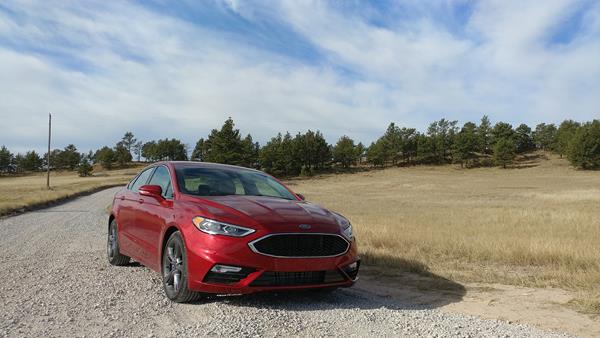 There's no question that the Ford Fusion is one of the best-looking cars in its segment. Ford learned a lot from its brief ownership of Aston Martin and put that to good use in its design department. The current generation of the Fusion was introduced in 2013, with head-turning gasps.

For the 2017 model year, Ford put the Fusion through significant revision, mostly to the interior. The 2017 Fusion retains the attractive items that have kept the car a hot seller, including multiple engine choices, great looks and a roomy interior.

Updates to the 2017 Ford Fusion include a new infotainment system, utilizing Ford's new Sync 3 system; a host of changes to the center console and bins; and additional optional features such as semi-automated parking and LED headlamps.

The 2017 Fusion is a very well-done midsize sedan that offers something for everyone. It proves that good looks can come with smarts and practicality too.

The 2017 Ford Fusion carries forward the Fusion's current-generation exterior design, with just a few modifications. The oblong grille, grinning lower intake, edge-bound fog lamps and peering headlamps remain. The headlights are a bit narrower and the front lip created by the slight overhang on the grille has been reduced.

The hood above the grille flows back to the windscreen with spreading hood lines which are now more emphasized to add a little more muscle to the look. Fenders are prominent, but not overbearing and remain almost flat with the body panels behind to keep the sleek look of the Fusion.

The raked windscreen and flowing roofline curve into a fastback rear with a clipped deck and light fender bulge. Body lines run along from below the side mirrors and across to the top of the rear tail lamps in a slightly downward motion, creating a curvature. The greenhouse remains straight at its bottom, emphasizing that expanding beltline to make that curve.

The overall look of the 2017 Fusion is beautiful. It remains one of the best-looking midsize sedans on today's market.

The interior of the Fusion is reflective of the attention to detail in design found on its exterior. For 2017 Ford changed the interior significantly with a near-complete redesign of the center console and parts of the dashboard. The 2017 Fusion's interior is even more upscale than before, as a result.

Most of the redesign came by removing the stick shifter and utilizing a shift knob instead, freeing up valuable console space for cup holders and storage. That means a more clear opening below the console, between the driver and front passenger's feet, where items like purses, extra containers or a jacket can be stored.

The Fusion makes good use of quality materials and smart design throughout, with plenty of technology and plugs to boot. Seating is also comfortable, with the driver's seat having a better adjustment range than any non-luxury vehicle in the midsize segment. Seating up front is set high as well, giving a more commanding view of the beautiful hood line and what's happening in front of and around the car.

The rear seating in the 2017 Fusion is good, with plenty of leg and shoulder room for two adults. Three if there's a pinch, though the center position is, as with most cars this size, only meant for very occasional use. Headroom in the rear is a bit less plentiful due to the roof's slope, but at over 6 feet tall, even this reviewer was able to sit back there without feeling too cramped.

The trunk of the 2017 Ford Fusion is wide and gives 16 cubic feet of space for storage. The rear seats fold down as standard, to add to that room. The doors for the Fusion open wide and have low sills for easier entry and egress.

The 2017 Ford Fusion introduces the company's new Sync 3 interface to the car. This is a huge change that dramatically improves the technology value of the Fusion over its former renditions. The previous MyFord Touch system was terrible on every level, and Sync 3 is its diametric opposite.

The base level infotainment in the 2017 Fusion is minimal and largely focused on radio tuning and Bluetooth calling. The upgrade to Sync 3 can happen with any trim level updated with the Technology package. It's also standard on some upper trims, including the luxury-level Platinum. Sync 3 offers a clear and concise touchscreen with large virtual buttons and easy-to-navigate menus.

Most of the uses for the infotainment in the Fusion are smartphone-based with some options for integrated apps. Also included is WiFi for connecting to a home network to receive updates from Ford, most of which will center on those infotainment options. Optional navigation rounds out the package. 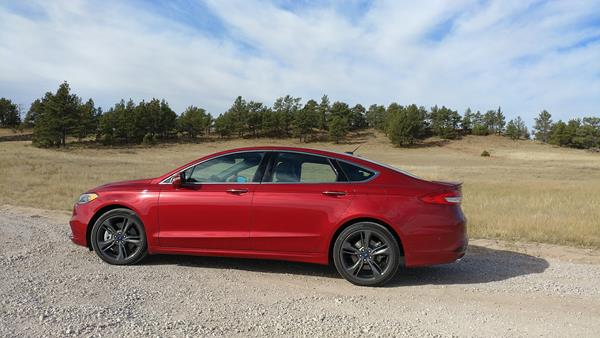 Fuel economy returns in the 2017 Ford Fusion will depend largely on the trim point and engine option chosen. The base level engine is a 2.5-liter four-cylinder that offers 25 mpg combined, with 21 mpg in the city and 32 mpg on the highway. That's about average for the midsize sedan segment.

The optional 1.5-liter turbocharged four-cylinder brings a more efficient 27 mpg combined rating, with 23 city and 34 highway. A 2.0-liter four-cylinder with turbocharging offers 25 mpg combined (21 city, 31 highway) and can be upgraded to all-wheel drive, dropping those numbers to 23 mpg combined (20 city, 29 highway). Both of these engines are offering good fuel economy for the segment, with the 2.0 being offered as the sports alternative to a V6.

For those insisting on a V6, one is offered for the Fusion that brings a somewhat below par 20 mpg combined.

The 2017 Ford Fusion has received a "Better Than Average" rating from the J.D. Power and Associates Vehicle Dependability Study. This excellent rating is tempered by a serious recall for the Fusion's transmission, issued late in the model year.

The 2017 Ford Fusion has received top scoring from both of the crash testing groups in the United States. It received a 5-Star overall rating from the National Highway Traffic Safety Administration (NHTSA), with four stars each for frontal and rollover and five stars for side crash tests.

The Insurance Institute for Highway Safety (IIHS) gave the 2017 Fusion a "Top Safety Pick+" rating, its highest acclaim, with top scores of "Good" in all crash tests plus top scoring for advanced safety features, available on some Fusion models. 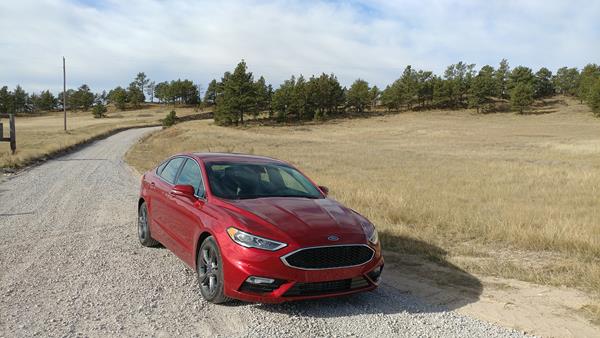 The 2017 Ford Fusion has four engine options, each with an automatic transmission. All-wheel drive is optional on some of these and each engine is available either standard or as an upgrade on specific model trim packages.

The base model S and SE are offered with a 2.5-liter four-cylinder engine that outputs 175 horsepower and 175 pound-feet of torque. This is a front-wheel-drive only option, paired to a six-speed automatic transmission. This base engine offers roughly average drive dynamics and mpg returns for the segment.

The SE trim can be upgraded to a 1.5-liter turob'd four-cylinder engine that creates 181 horses and 185 lb-ft of torque. This engine is also paired to a six-speed automatic, but comes with paddle shifting and engine stop-start for improved city mpg. This is a sportier engine with a faster uptake on its output, while delivering better fuel economy.

The SE can also be upgraded to a powerful 2.0-liter turbocharged four-cylinder engine that produces a mouthwatering 240 hp and 270 lb-ft. This runs to the front wheels through a six-speed automatic transmission with all-wheel drive as an option. Most can expect sub-7-second 0-60 mph sprints with this engine in AWD and closer to 6.5 for FWD. These numbers may not be spectacular for the segment, but they come with a fun appeal that makes the Fusion feel faster than it is. This engine is standard on the Titanium and Platinum trims.

The V6 Sport model has a turbocharged 2.7-liter V6 that outputs 325 horses and 380 pound-feet through a six-speed automatic with all-wheel drive. This car lives up to its sport name with sprint times in the 6-second range on public roads. At least that was about our average, with 5.7 being our best. Track times will likely be a bit faster.

All Fusion models have the same responsive chassis and great steering feel. The V6 Sport adds some chassis tuning for better handling and some changes to the braking for better control. In all renditions, the 2017 Ford Fusion feels confident and capable.

Also available for the Fusion are hybrid and plug-in hybrid models, reviewed separately.

Compared to other midsize sedans, the 2017 Fusion holds only average value on its surface. But the upscale interior experience and the fact that dealerships often incentivize the Fusion to counteract the impingement of crossovers on the segment are things that raise the Fusion's value proposition.

The Fusion remains one of the best-looking and most upscale cars in the midsize arena, despite its price tag not reflecting that fact. This is a good thing. 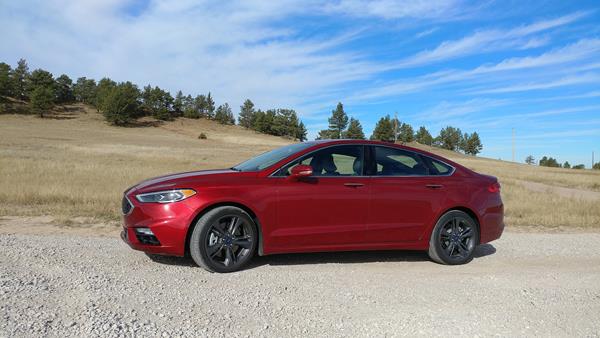 The Ford Fusion is a well-rounded sedan in the midsize market, but others have been busy catching up. The Honda Accord remains a best-seller for a reason, as does the Toyota Camry. Both offer excellent interior experiences and a lot of smart appeal, but the Fusion is only rivaled by the Honda for sportiness. Neither the Accord nor the Camry have a V6 offering that's anywhere as sport as the Fusion's. For that, the new Chevrolet Malibu may be the Fusion's chief rival, offering a great look and sporty option. The Mazda MAZDA6 is aged similarly to the Fusion and has plenty of exterior appeal, but falls short inside by comparison.

Shoppers should definitely cross-shop in the midsize sedan segment to find their best fit. But the 2017 Ford Fusion offers something for everyone and has a great look with a well-rounded appeal that's hard to match. Ford is unique in its approach to offering the same sedan with a range of fuel-efficient and muscular options for buyers.