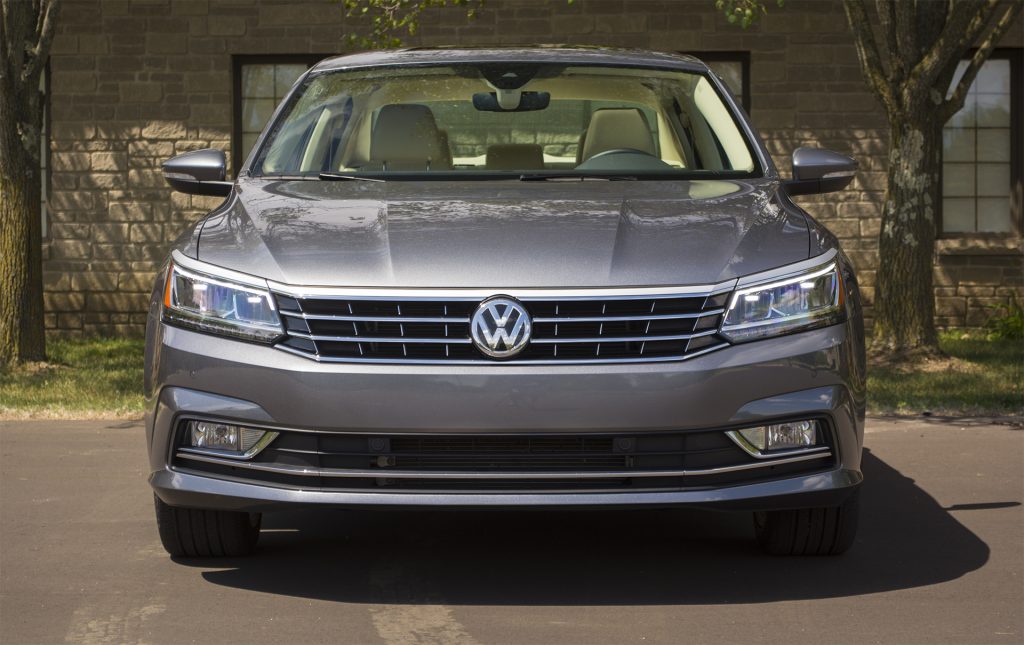 The Volkswagen Passat has always been an odd duck in the midsize sedan class. Compared to other sedans, the Passat was slightly smaller and more expensive. But it stood out with a striking design, sharp driving dynamics, and a Germanic quality that few sedans in the class could match. The Passat sedan and wagon never really sold in great numbers in the U.S., but it did have a loyal following. But when 2012 rolled around, Volkswagen made a change that would upset their fans. Volkswagen wanted a bigger slice of midsize sedan market and decided it was time to build a Passat specifically for the U.S.

The new Passat was bigger and featured a softer ride. It was also cheaper than the outgoing model, thanks to Volkswagen making some very questionable decisions in terms of materials and engines. While fans decried this decision, the changes appeared to be working. In the first two years, the Passat became a strong seller for the brand. But after that, sales took a plunge. The decisions Volkswagen made to make the Passat cheaper came back to bite them.

For 2016, Volkswagen went back to the drawing board and took a fair amount of customer feedback to help make Passat a better sedan.

What We Love About the 2016 Volkswagen Passat SEL Premium

What We Didn't Love About the 2016 Volkswagen Passat SEL Premium 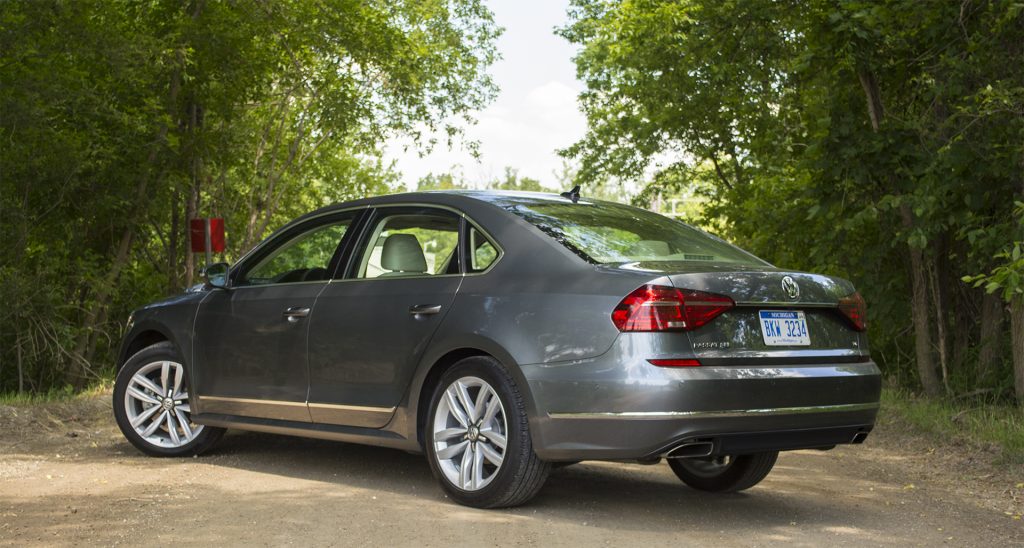 The current Volkswagen Passat has gotten its fair share of criticism for its bland design. It seems the brief given to designers was to create a midsize sedan minus any sort of style. For 2016, Volkswagen has tried to fix to blandness problem with the Passat. There is a new front end with a more substantial grille, new headlights with LED daytime running lights, and reshaped hood. The back end comes with a new trunk lid and bumper. The changes do give the Passat some style. But compared to other models in the class, the Passat trails. 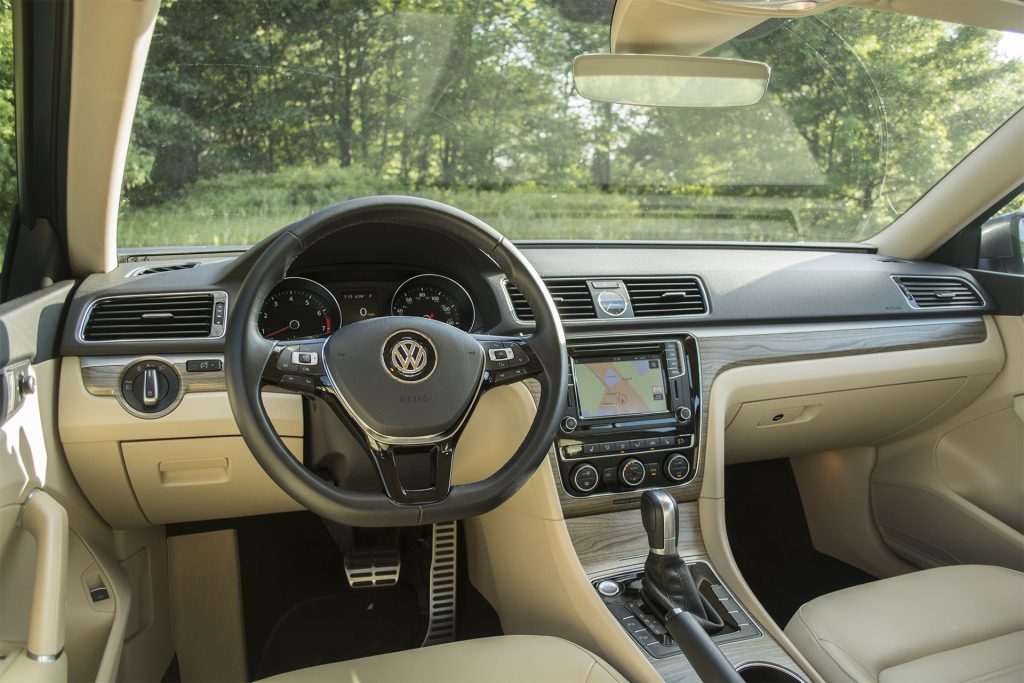 Stepping inside the Passat for the first time, you're amazed at how much space is on offer. Even though Volkswagen says the Passat is a midsize sedan, the interior dimensions put it more in the full-size class. The front provides plenty of space and the seats are surprisingly wide. Power adjustments for the driver and passenger mean anyone will be able to find a setup that works for them. Move into the back and it is quite shocking how much legroom is on offer. Even a tall passenger will be able to stretch their legs out. Headroom is quite good for most passengers. Higher trim Passats such as our SEL Premium offer rear passengers a USB input and heated seats. The Passat's trunk is one of the largest in the class with 15.9 cubic feet of space on offer.

The interior's design is upscale and simple. For 2016, Volkswagen made some changes in terms of materials. Compared to previous Passats we have driven, the addition of more soft-touch plastics and faux wood make it a pleasant experience to sit in. Volkswagen didn't mess with the dash layout for which we are happy as it is simple and easy to find the various controls. 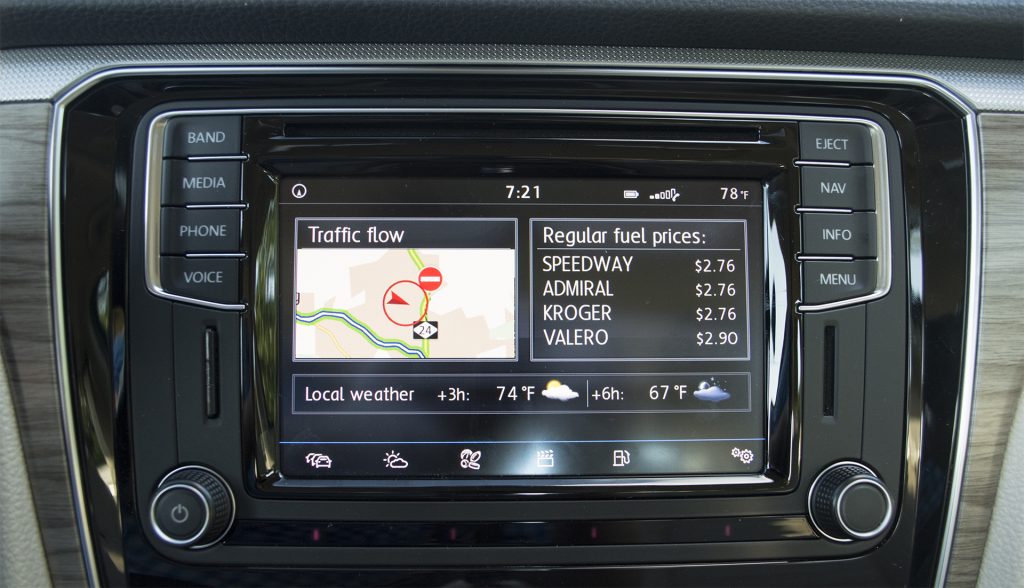 Depending on the trim, a Passat can either be fitted with 5 or 6.33-inch touchscreen system. Our SEL Premium tester came equipped with the larger of the two screens. The system is quite easy to use thanks to quick response times, a simple interface, and buttons flanking the screen to take you to various parts of the screen. A proximity sensor under the screen brings up a pop-up menu whenever your hand is near it.

Volkswagen's infotainment system also features Apple CarPlay and Android Auto capability through the company's App-Connect system. We tried CarPlay with the system and found that it instantly recognized our iPhone. Once recognized, an interface similar to an iPhone pops up and allows you to access various functions such Siri, Music, Podcasts, and Apple maps. Unlike previous cars that we have tried CarPlay in, there were no performance or stability issues.

There are a couple of things we would like to see Volkswagen change with their infotainment systems. First is offering larger screens. Most competitors offer screens from 7 to 8-inches. It would be nice for Volkswagen to move to the 6.33-inch screen as the base and put in a larger screen for higher trims. There is space for it in the center stack. Second, we like to see Volkswagen using a different finish for the screen. The matte finish makes the screen look quite dull. 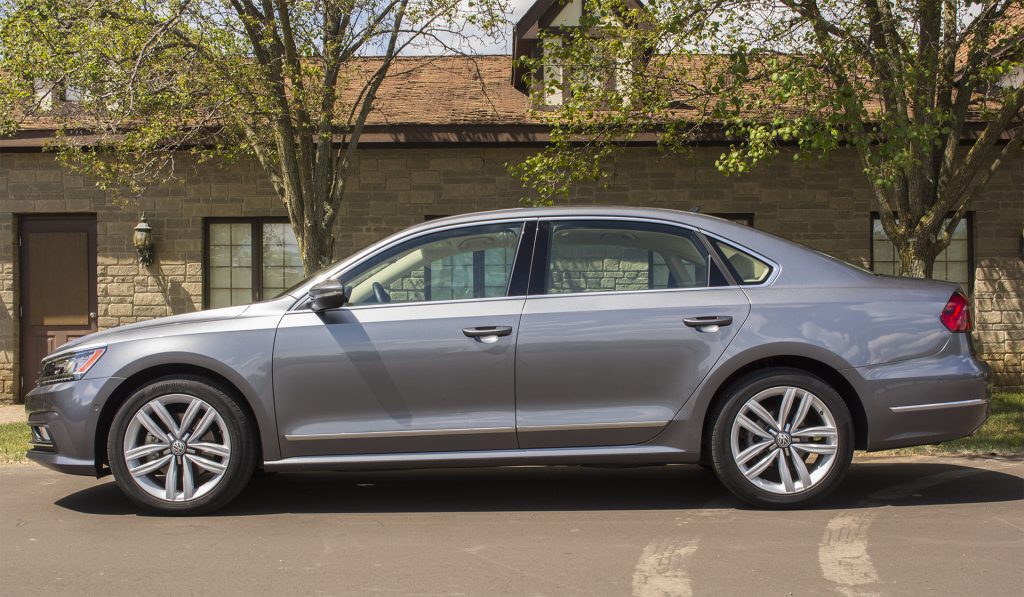 The Passat is about average in terms of reliability according to Consumer Reports and J.D. Power. Where it doesn't do so well is in the initial quality rating. J.D. Power says the Passat is below average in this regard. This is most likely due to Volkswagen's decision to make the current Passat slightly cheaper than the previous generation which means it doesn't have the same Germanic quality as some other Volkswagen models.

Both the National Highway Traffic Safety Association and Insurance Institute for Highway Safety rate the 2016 Volkswagen Passat high in their tests. NHTSA awarded the Passat an overall five-star rating, while IIHS named it a Top Safety Pick+ (the + means the vehicle features a crash avoidance and mitigation system). In terms of safety equipment, all Passats get a full suite of airbags, traction control, stability control, and backup camera.

SE models and up feature Volkswagen's Car-Net telematics system that can automatically call emergency services in the event of a crash, locate your vehicle if it is stolen, call for roadside assistance, and set up speed alerts. SE models also feature adaptive cruise control and autonomous emergency braking. If you want blind spot monitoring, you need to jump up to the SE w/Technology trim. 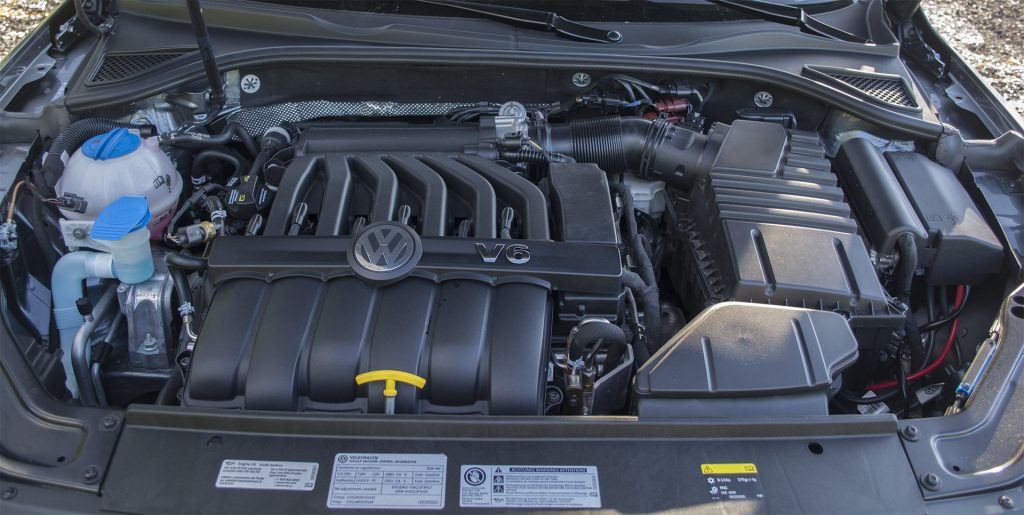 For the time being, the Passat is offered with a 1.8L turbocharged four or a 3.6L V6. The TDI engine that was available last year is currently on hold due to Volkswagen's diesel emission scandal mass. Our Passat was fitted with the V6 which produces 280 horsepower and 258 pound-feet of torque. It should be noted that the power figures come when you fill up with premium. Fill up with regular and expect a slight decrease in power figures.

Volkswagen is one of the few automakers that is sticking with a V6 and not a turbo-four as the top engine. We like this choice for the most part as the V6 is not only one of the smoothest engines in the class, but one of the most powerful. Step on the accelerator and the Passat leaps in action with power coming on instantaneously. The only downside to the V6 is the fuel economy. As we noted earlier, the Passat V6 has the lowest fuel economy numbers in class. You'll be on a first name basis with the gas pumps.

Transmission-wise, the V6 comes solely paired with Volkswagen's six-speed DSG dual-clutch gearbox. The DSG delivers very fast gear changes when the vehicle is at speed. Leaving from a stop or doing low-speed maneuvers shows some major problems with the DSG. The transmission exhibits signs of hesitation, lurching, and even bogging down the V6 engine. We're wondering if going with a standard six-speed automatic would have been the better choice.

If you're looking for a sedan that is perfect for a long road trip, look no further than the Passat. The long-wheelbase and suspension tuning smoothes out even the roughest roads with no issues. Wind and road noise were kept to almost near silent levels in the cabin. In the corners, the Passat does show some body roll. But it doesn't take away from the Passat being somewhat entertaining. Steering feels precise, although some drivers will want a bit more weight.

This is where the Passat loses some big points. The only way you can get into a V6 Passat is by going with the top-of-the-line SEL Premium which stickers at $36,835. Add destination and you're looking at an as-tested price of $37,655. For that amount of cash, you can get into a decently equipped compact luxury sedan. The V6 option makes a strong case for going with the standard 1.8T. The engine provides more than enough power for the daily drive, is almost as refined as the V6, gets excellent fuel economy (25 City/38 Highway/29 Combined); and is available on all of the trims. For example, the SEL Premium equipped with the 1.8T comes in at $35,090 with destination. That's a difference of $2,565 that you can put towards something else.

For most folks, we would say the pick of the range is the SE w/Technology. You get most everything that you'll find on the SEL Premium including blind spot monitoring and autonomous emergency braking at a price that won't break the bank ($28,410). 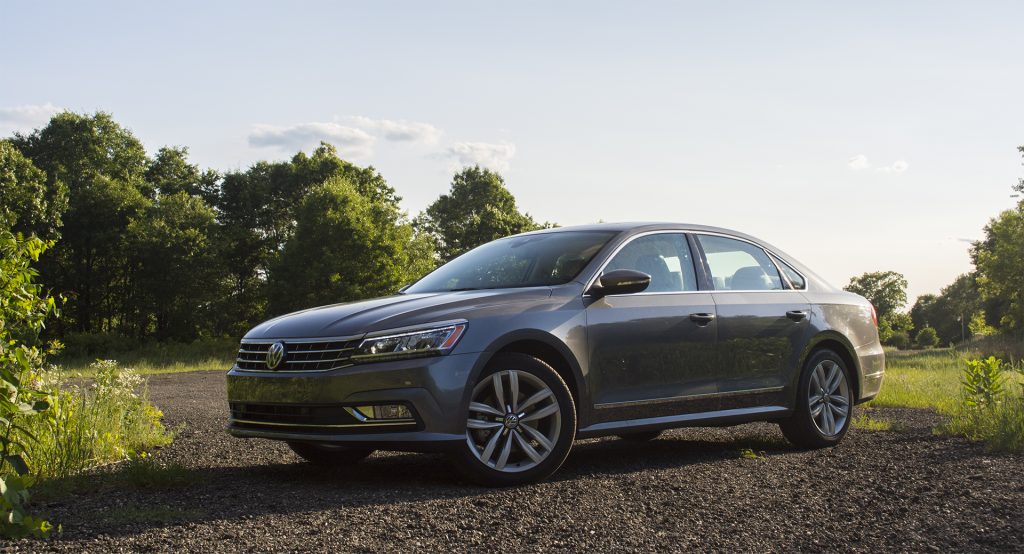 The midsize sedan class is very competitive and there is a sedan that will fit your wants and desires. For example, if you want something spacious and an excellent reliability, then you can choose from the Honda Accord, Nissan Altima, or Toyota Camry. The Mazda6 is perfect if you're looking for something with a bit sport. Ford and Chevrolet currently lead the pack in terms of looks with the Fusion and Malibu. Don't discount the Hyundai Sonata and Kia Optima as they have value and loads of equipment on their side.

But what about the Passat? The only reason we would recommend it to someone is if they need a large rear seat and want something that makes the long-distance trip feel like nothing. Everything else is about average or below average when compared to competitors. The changes made for 2016 do put the Passat in a better place, but it still trails the competition by a fair amount.