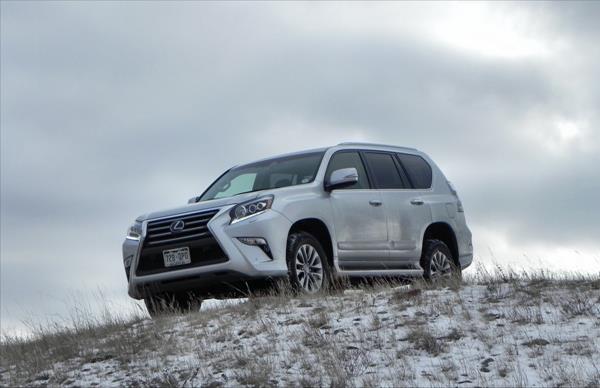 Overview (Final Score: B)
The 2016 Lexus GX 460 is a luxury sport utility that separates itself as one of the few that focuses on utility rather than luxury. Only a handful of makers still produce truly off-road capable, get-anywhere luxury SUVs and the GX 460 is one of those. With underpinnings that have roots in Land Cruiser and luxury that comes from Lexus, it's a solid machine.

This doesn't mean it's without rival or the best choice for every buyer, of course. The GX 460 has been on the market as-is for several years now and is one of the oldest designs, in its current generation, being sold. This means that many aspects, such as the interior and seating, are dated and perhaps sub-par to some shoppers. Fuel economy is also poor, considering.

Yet there is a lot to love about this big Lexus as well. At no time does the GX 460 feel out of its element or lack confidence. A commanding view of the road is supplemented by the big utility's extreme stability.

So if you're in the market for an SUV that is ready for off the pavement extremes, the GX 460 is a solid choice. 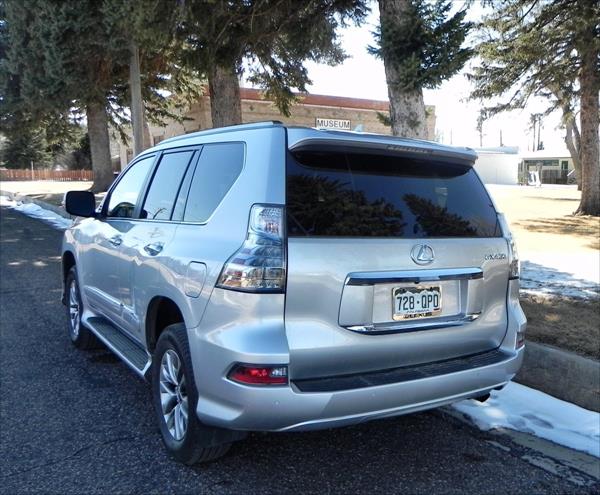 Exterior View (8/10 relative to market)
The 2016 Lexus GX 460 is a big, burly, full-sized luxury sport utility and as such, there are limits as to what kind of stylistic refinements can be made. Because it shares underpinnings with legendary offroaders in the Land Rover line and because of its design for interior space, the GX 460 begins as a square box on wheels and there is little that can be done from there. This doesn't mean that Lexus didn't put some effort into styling, though, and the GX 460 is better for it.

The signature Lexus "truck" grille, used on most of its truly capable SUV lineup, including the RX and LX series, is found on the GX 460 as well. There are similarities with the Toyota truck line, but only superficially so. The hood comes up from the grille in a gentle slope to the windshield, with a lot of character lines added to emphasize the power underneath and to deemphasize the hood's length. Fender bulges at front and rear continue the power display, but are offset by the angled rear side window glass, rear spoiler, and the running board cum step on otherwise plain paneling.

The entire look is of elegant strength rather than brute power. It's a good, though somewhat dated, look that is easy to understand. 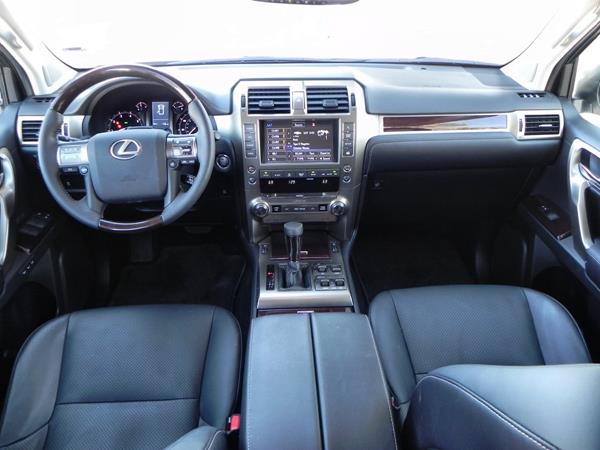 Interior Comfort, Quality, Ergonomics (6/10)
To say that the interior of the 2016 GX 460 is dated would be an understatement. Even other vehicles in the Lexus lineup have more modern fittings and the excellent front seating is countered by a decidedly sub-par second row. Fit and finish in most of the GX lineup is excellent, but the base trim leaves a lot to be desired with its vinyl interior.

These drawbacks are serious detriments, but when you add in cargo, things get worse. With both the second and third rows down, there is less than 65 cubic feet of cargo space. Hardly cavernous given the size of the big GX.

Outside of those drawbacks, though, there are some high points for the Lexus GX 460's interior. The real wood trim in the upper levels is beautiful, the front seating is old school, but very comfortable, and the controls layout is relatively simple and straightforward. We especially like the infotainment, which is based on the Toyota Entune system rather than the Lexus Remote Touch system, so it's a true touchscreen that's reachable from the seat rather than having a control knob below the shifter. This improves its use greatly.

We also like the luxurious, but not fragile nature of the interior's build and design. Although it is all of high quality and looks high-rent, it doesn't impart the impression that it can be broken by a little bit of mud on your shoes or an occasional hard jarring from an offroad adventure. The steering wheel is robust, the shift lever is meaty, and the dashboard is pretty, but not weak. Kudos to Lexus for keeping the truck-like appeal in this SUV without losing its class.


Technology (9/10)
The infotainment in the 2016 Lexus GX 460 is different from that found in most other Lexus models in that it does not use the Remote Touch interface. This makes it easier to use in most situations and faster to respond. Upper packages offer the Lexus Enform apps suite and smartphone integration, which adds

The 8-inch touchscreen is standard equipment and doesn't change as the trim levels and package increase and the base model comes with an impressive array of built-ins such as Siri Eyes Free and HD radio. Upgrades add the above-mentioned app suite, a Mark Levinson audio system, and navigation. The Enform apps suite includes remote smartphone-based access to vehicle maintenance logs, its status (fuel level, whether it's parked or moving, etc), find the vehicle in a parking lot, and more. You can also remote start and pre-set climate settings from the app. These require a subscription, of course, but this is one of the more advanced connected offerings in the luxury segment.

Fuel Economy (7/10)
Fuel economy in the big GX 460 is rated at 17 mpg combined. The EPA estimates 15 mpg in the city and 20 mpg on the highway. In our week with the Lexus GX 460, we managed a 15 mpg overall fuel economy rating with a mix of driving that was heavy on inclement weather.


Predicted Reliability, Initial Quality Ratings (10/10)
Because the 2016 GX 460 is the latest in a long series of this generation of GX SUVs, it is well-vetted. Reliability estimates are all high for this vehicle, based largely on past performance in previous model years. J.D. Power and Associates gives the GX 460 a rating of "Among the Best" in its Vehicle Dependability Study.


Safety (8/10)
Safety ratings for the 2016 Lexus GX 460 are difficult to measure as the vehicle has not been crash tested by the National Highway Traffic Safety Administration or the Insurance Institute for Highway Safety. It was not tested in 2015 either. Our assumption is that it would do relatively well, given the amount of standard safety equipment and the GX's large size. 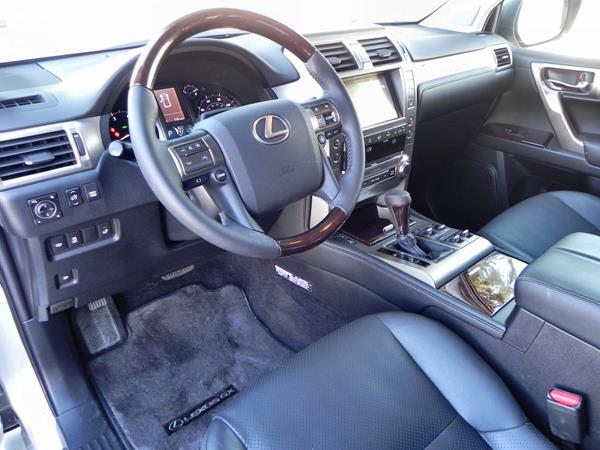 Performance (8/10)
The GX 460 is powered by a 4.6-liter V8 that's rated at 301 horsepower ( kW) and 329 pound-feet ( Nm) of torque. This mates to a six-speed automatic transmission with full-time four-wheel drive. A towing preparation package is standard equipment and the big Lexus is rated to tow up to 6,500 pounds.

This is an average amount of powertrain output for an SUV in this class with an eight-cylinder engine. The GX 460 is a strong drive with a solid presence on the road. Its real raison d'etre is going off the road, though. Off the road, those Land Cruiser roots we mentioned really come to the fore and the GX becomes a serious "go anywhere" machine. Many may not suspect that the Lexus has the kind of capabilities it does.

On the road, the GX 460 is smooth and well-mannered, but its truck-based roots show in maneuverability and visibility. The ride is high and wide and its turning radius is big. These are the tradeoffs for the all-weather and all-terrain capabilities of this luxury SUV.


Pricing and Value (7/10)
The Lexus GX 460 is expensive, though not out of the range of its peers in the luxury sport utility market. At the base level, however, the GX's price point versus equipment are subpar and a substantial upgrade cost is required to get into an equipment and interior quality that is comparable to others on the market. This comes as a combination of the Lexus GX 460's relatively aged design and the high cost of equipment under the bodywork to give it those off-road chops.

Every vehicle has its balance point and most who buy the GX 460 will not likely be unhappy with their decision. There are, however, a few good contenders in the luxury SUV market that may offer a better choice of fuel economy, people hauling, comfort, or style. So although the GX 460 may be a good choice for some, we do recommend that you consider all options before buying. 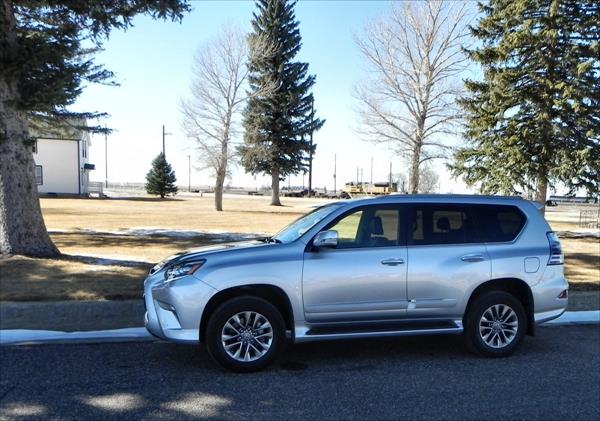 Total Score and Competitive Comparison (63/80, 79%)
There are several luxury sport utility vehicles to choose from on today's market. For those who are looking for an authentic, trail-ready SUV, though, the field narrows considerably. The GX 460 is rivaled by its brother the LX 570, which is slightly larger and more expensive, and the smaller RX series. It's also rivaled by the Range Rover series from Land Rover, including the LR4 and the standard Range Rover.

On the whole, though, the 2016 Lexus GX 460 is an excellent SUV for those who truly need an offroad-capable, luxury vehicle that offers comfort and muscular stability in one package. Although dated, the GX is also the most well-vetted of the offerings in this narrow field of products.