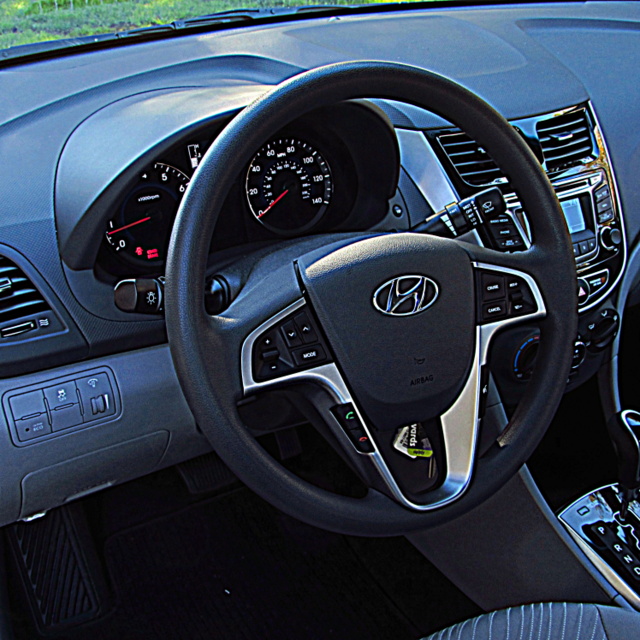 
Overview (Letter Grade after 8 Categories: B-) :

The subcompact Hyundai Accent enters its final model year before a redesign with just some changes to trim level designations for the sedan and five door hatchback with features and styling all remaining the same as last year. Luckily for Hyundai that is no bad thing as the hatch is very European in its styling giving it a very sporty appearance whereas the four door sedan takes a more grown up and conservative approach. We could see them both appealing to different drivers but for our test we had a fully loaded Accent SE sedan which stickered for just over $17,000 putting it right in competition with models like the Honda Fit, Scion iA and Ford Fiesta.

We would mention the Nissan Versa sedan which is even less expensive but we don't like to relive the week we spent in that buzzing, rattling, slower than maple syrup and styled by a blind porcupine compact best seller. We can think of no reason to buy a Versa other than because it is cheap monetarily but then we think you will feel cheap and cheated when you get it home too. Thankfully, the Hyundai Accent we tested was full of so many "feel good" factors that we could easily see why this car appeals to so many.

In fact, we recently ranked the Accent right behind the Honda Fit as our second favorite subcompact on the market right now, that is, until we drove our new class favorite the Scion iA. In fact, that subcompact highlighted really the only notable flaw in the Accent package and it is something we blame on both the laws of physics and the age of its design. But still, we do recommend you check out the Accent if cross shopping the Fit or iA over competitors like the aforementioned Versa, Toyota Yaris or Mitsubishi Mirage. The Accent just feels a bit more grown up. 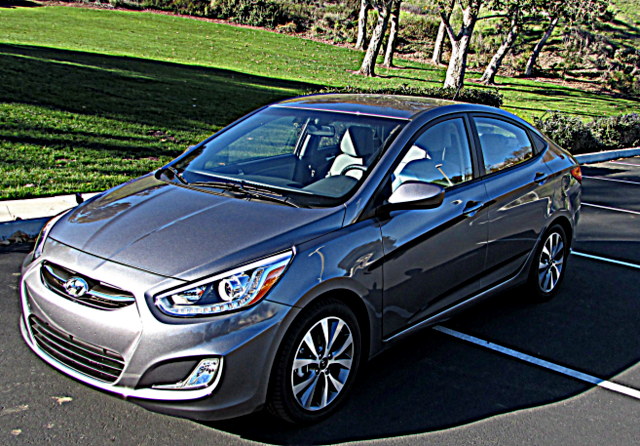 What we loved about the 2016 Hyundai Accent

What we didn't love about the 2016 Hyundai Accent 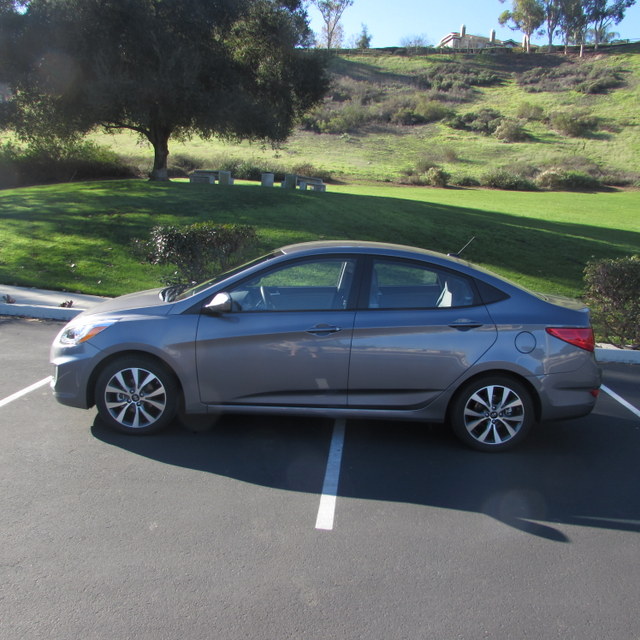 We do admit to preferring the European and more muscular visual style of the Accent 5 door hatchback but the Accent sedan is not without its own unique appeal. With a clear visual connection to other Hyundai sedans like the Elantra and last generation Sonata, the Accent sedan is able to punch above its size in terms of visual maturity and grace. It does not look like a tiny toy car. 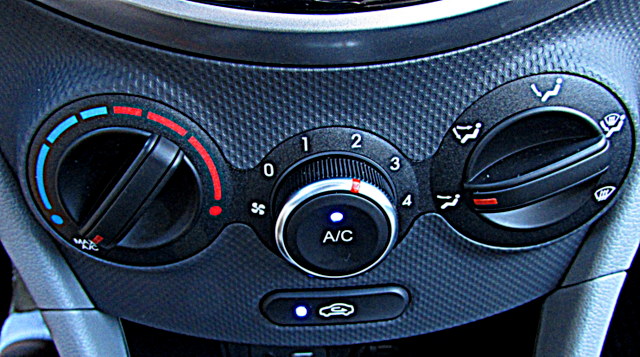 Interior Comfort, Quality and Ease of Use (9 out of 10)

We admit it, the Hyundai Accent SE model we tested would not have scored as well in this test without its two option packages included as this helps dress up the interior with piano black trim, higher grade seat trim, alloy wheels, steering wheel mounted audio controls, leather wrapped steering wheel as well as other nice-to-haves like cruise control, Bluetooth, a tilt/telescoping steering wheel and projector beam headlamps.

In total that brings the grand total to $17,980 for a subcompact, fuel efficient sedan that easily accommodates four adults, five in a pinch that feels like it has been assembled to last. The dashboard design is the picture of clarity and there is a sliding center armrest for the driver so his or her arm won't tire during long drives. The trunk is large and nicely sized at 13.7 cubic feet—more than you get in a Ford Focus sedan or the Acura ILX.  It's nice to see Hyundai baked in all of the fundamental quality of its larger sedans into the Accent even though it is their smallest and least expensive offering. 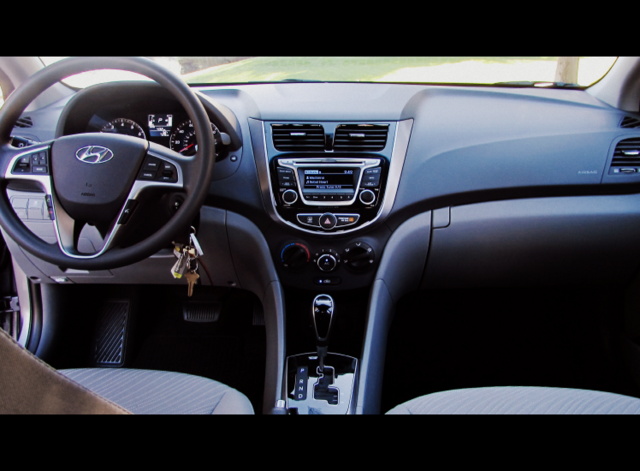 Now, if you just read all of the latest from the recent Consumer Electronics Show in Las Vegas then we doubt the 2016 Hyundai Accent would strike you as a very cutting edge or hi-tech car. And while we agree it is lacking in active safety features that are now standard on rivals like the Scion iA, the Accent features everything a person needs given the fact that an owner's smartphone can handle most functions the car can't.

Thankfully on that count our Accent SE had Bluetooth streaming, a USB-port and a modern 6-speed automatic which we praised on high simply for not being a CVT automatic. Otherwise, the Accent came with power everything, heated side mirrors, a very decent sounding 6-speaker audio system and air-conditioning controlled by three of the simplest looking knobs we have seen in a while. They were gorgeous and we were grateful not to have to punch through three touchscreen menus just to change the fan level. 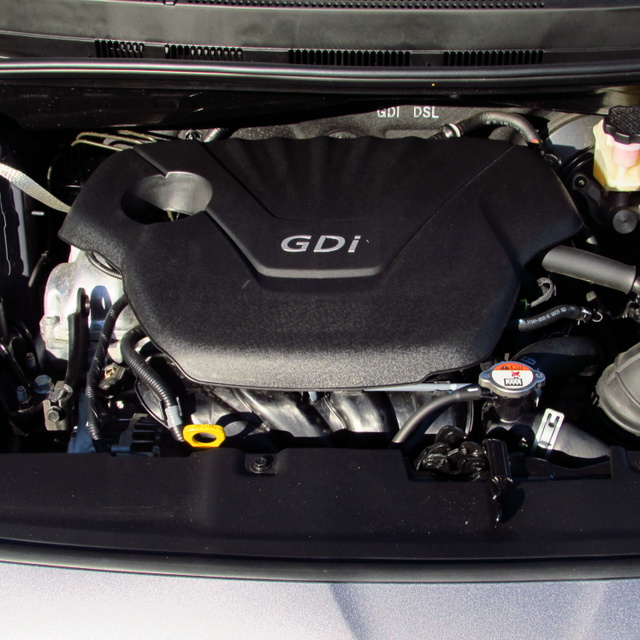 On regular unleaded the EPA estimates that the Accent should return a fuel economy average of 27 city/38 highway. During our week with the Accent we found it easiest to hit the highway average during long motorway cruises but around town figures could drop down to 23 miles per gallon if you were dealing with downtown LA traffic. But overall our figure came to 32 miles per gallon once averaged together which was quite impressive.


Predicted Reliability and Initial Quality Rankings (9 out of 10)

According to JD Power and Associates the Hyundai Accent has been and continues to be the leader in small car initial quality. That then means that this car's ranking in the long term reliability survey has also risen to the top in recent years thereby changing many people's perception of how reliable Korean cars could be even without a 10-year warranty. 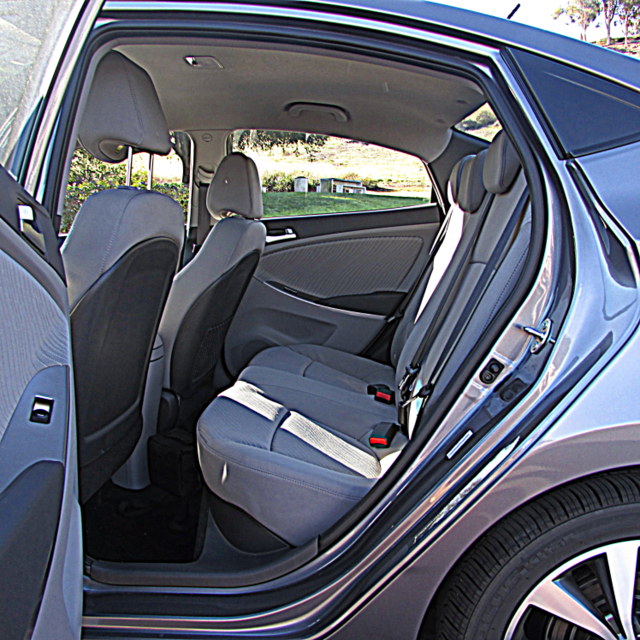 The current Accent is based on a much older design and platform than most of its competition so it may come as little surprise that this little subcompact came up a little short in this category mainly due to the IIHS and their very difficult small front overlap crash test meant to mimic an impact with a fixed object like a pole or tree. In the Accent there was significant intrusion into the passenger compartment with most concern given to the crash test dummies legs which were affected by the dashboard which moved back towards the driver much farther than they like to see happen.

But do bear in mind this is a subcompact and very few vehicles this size excel in the IIHS crash tests with only the Scion iA being awarded a "Top Safety Pick +" score and the Mitsubishi Mirage, Fiat 500 and Nissan Versa twins all scoring similarly to the Accent. We are sure once Hyundai introduces the next redesigned version the safety score should improve immeasurably. 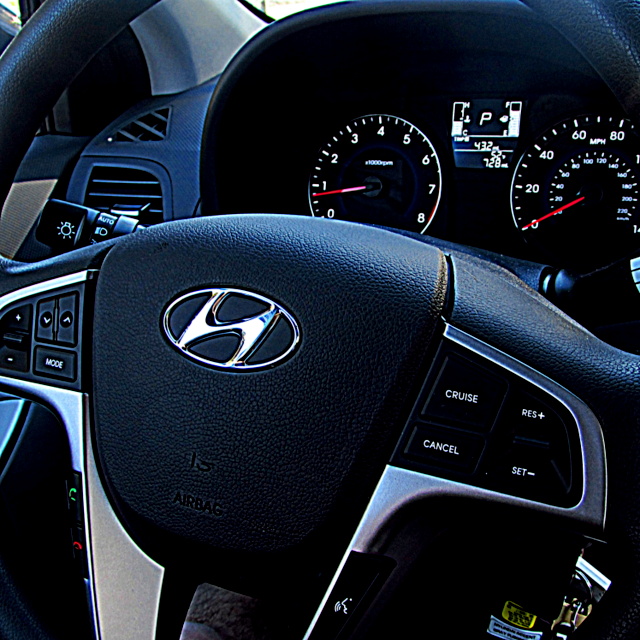 Now, we know a subcompact car like the 2016 Hyundai Accent is not meant to be a high performance sports sedan but understand we expect more from a car than a Nissan Versa sedan driving experience. So thankfully Hyundai does not provide one to the buyers of this zippy little fuel sipper. While never a true powerhouse, the 1.6 liter 137 horsepower/123 lb. feet of torque 4-cylinder is perfectly well suited to this vehicular application. It can bit a little bit gravelly sounding at high revs when you push it but otherwise the motor easily settles to a quiet thrum.

We credit what must be an ace sound proofing job by Hyundai and the adept work of our tester's six-speed automatic which performed seamless shifts and unlike with a CVT automatic tried not to leave the motor revving at redline for too long. At cruising speeds the interior is surprisingly hushed with the audio system having no trouble drowning out any noise from the outside.

Also impressive was the quite absorptive ride this little sedan possesses as it handles potholes, speed bumps and more with little of the bounciness you feel driving any other subcompact. We guess you could call the 2016 Hyundai Accent the limousine-ride of the class. Steering was low effort making it easy to maneuver through parking lots but could do with a bit more feel. But then should the Accent try to be a small BMW? Well we would rather it not do that otherwise we will just have another Mini and we all know how cramped those are and how harsh the ride is. Not that they aren't fun to drive, they just don't excel (pun intended) at practicality like the 2016 Hyundai Accent. 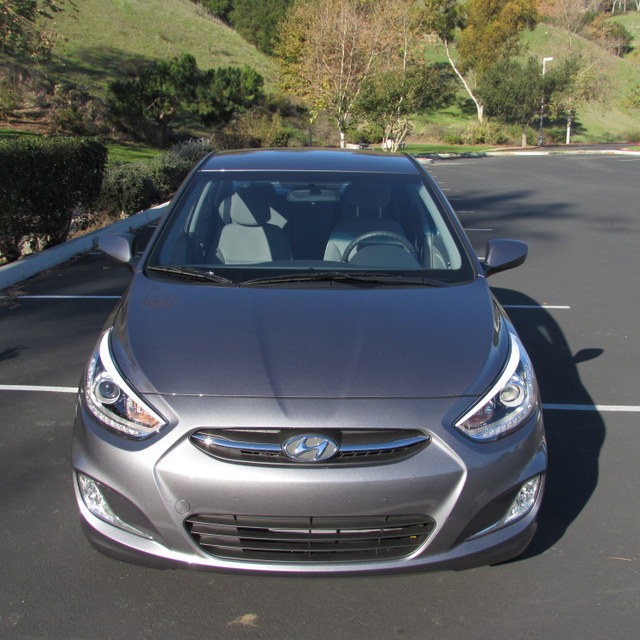 Prices for the 2016 Hyundai Accent SE sedan start at just over $14,000 and with that you get the basic essentials like air conditioning, power windows, power door locks, a 6-speaker audio system and 60/40 split folding rear seats. But, as we absolutely hate driving anything with plastic wheel covers we would recommend the sensibly priced $600 Popular Package and $800 Style Package as well (that is where you get a handsome set of 16-inch alloy wheels). 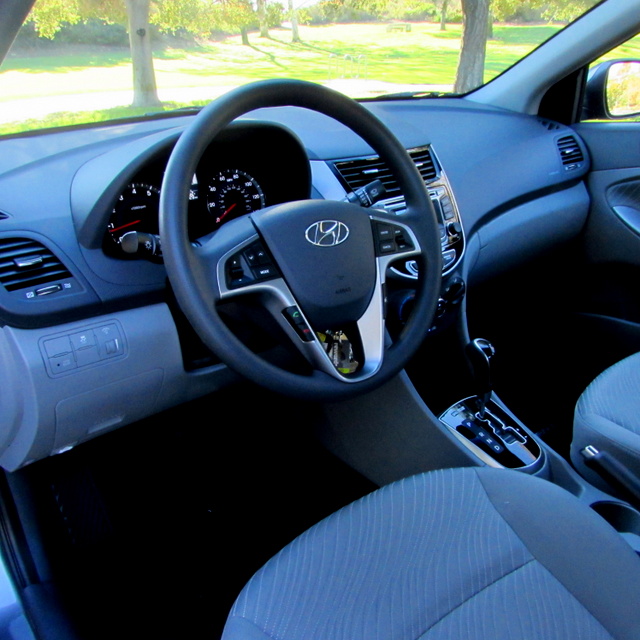 The 2016 Hyundai Accent is a very compelling package for consumers given its value for money, efficiency, build quality, the level of passenger/cargo room and the refined feel of the driving experience. Sure, it might not be as fun to drive as the 2016 Scion iA or as cutting edge as the Honda Fit what with its physics defying "Magic Seat" but the Accent trades on its own merits namely a truly grown up driving experience.

From behind the steering wheel, the Accent feels substantial and never gives you the impression that you are in the smallest car on the road. It is truly an excellent subcompact car choice and is superior to newer rivals like the Nissan Versa Note, Toyota Yaris, Ford Fiesta, Chevy Spark and Mitsubishi Mirage. And given that a new model arrives next year, we think there is a high likelihood that the Accent may soon change the subcompact car pecking order. 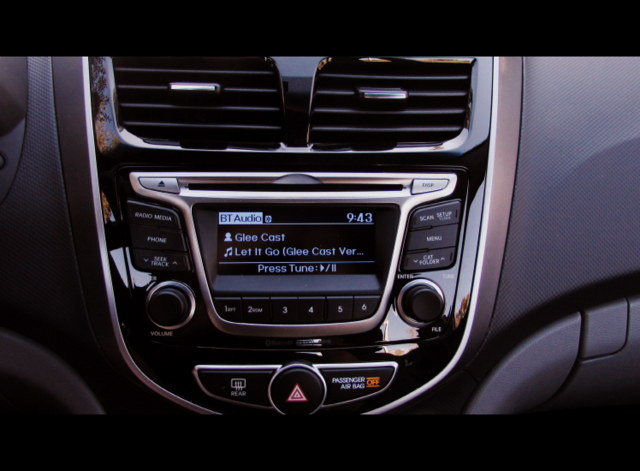