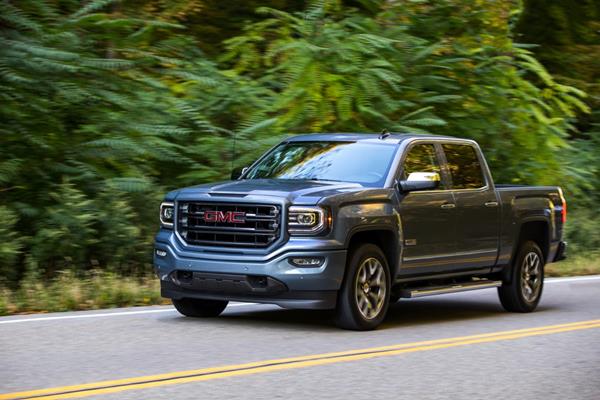 The 2016 GMC Sierra is a more premium-level pickup truck offering than other brands, not differentiating itself with the lowest price on the market, but instead with the most well-done interior and feature set for the buck. Available in four trims, the Sierra's greatest feature is its interior comfort combined with its excellent performance.

For 2016 not much has changed from previous model years in this generation of the pickup. Three engine choices with good fuel economy, both on paper and in real use, are the basis on which this truck has built its reputation. Rugged looks and design have pushed it forward as a truck of choice for fleet and workaday use. We were impressed with the performance level of both of the Sierra's V8 engine options as well.

There are downsides to the 2016 Sierra, of course, including the brand's lack of a serious offroad contender to go up against the Ford Raptor, Ram Rebel and Toyota TRD Pro series. Value retention is also a concern with this more premium-level pickup. For many buyers, these are side notes to the GMC Sierra's strengths.

The Sierra is offered in a variety of cab and bed length configurations and with either rear-wheel or 4-wheel drive. 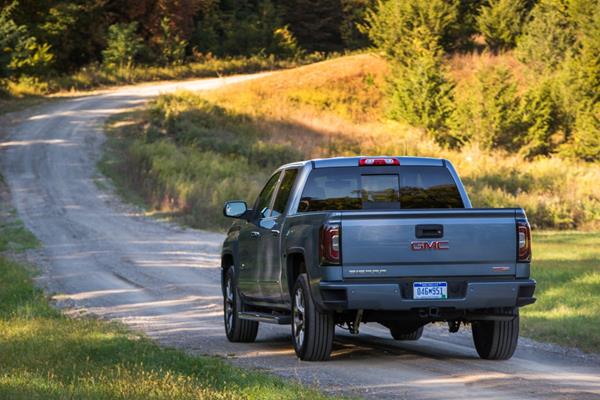 The 2016 GMC Sierra carries forward the new-generation look for the GMC line, headlining it as the company's flagship. The overall look is squares on squares, with the grille, hood lines, fenders and greenhouse all emphasizing the strength of right angles.

The grille of the GMC Sierra is a rectangle with smaller rectangles making up the mesh on the Denali trim. Headlamps flanking the grille are also square-shaped and below, the bumper has square openings for the optional foglamp bezels and tow pin ports. The flat hood is bisected by a center valley with square sides that mirrors the raised squares to either side. Fenders flow from there in squares, dimpled with emphasis, above the wheels.

At the rear, bumper cutouts for easy-access steps are also squared, as is the tailgate and the rear lighting.

Individually, these square references seem marked for ugliness, but the whole package comes together for a decidedly powerful appearance that really emphasizes the GMC Sierra's upscale, but ready-for-work character. 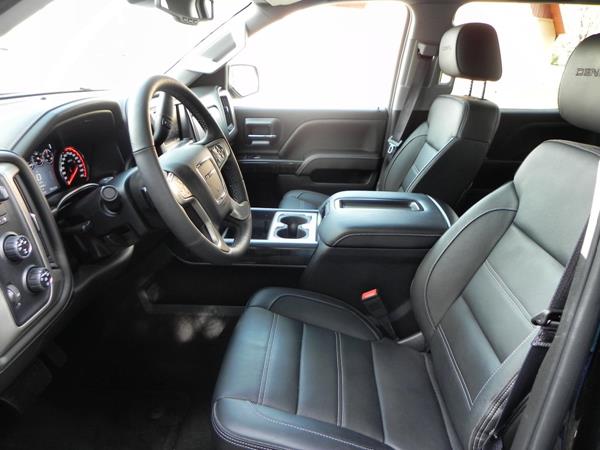 All GMC models are marked by their very premium-level and comfortable interior experiences. The 2016 Sierra is no different, featuring a roomy, well-designed interior that goes beyond what many other pickup trucks might have. Much of this is due to the higher price point of the entry-level Sierra, which comes thanks to an expectation that a GMC will be more premium than competing full-sized trucks.

Lower-end trim levels are work-a-day, for sure, but have a more upscale feel than do the entry-level counterparts on the market. Mid-level and upper-level trims in the Sierra are very posh, with a lot of refinement that speaks of luxury. Although competitors from Ford and Nissan have encroached on this a bit with their highest-level trims, the GMC is still master of the premium-level pickup truck interior.

Seating is roomy, even in the regular cab models with their work-truck benches. Moving to a Double or Crew Cab configuration opens up excellent rear seating that set the bar for these cabin styles in the competition. Drivers and front passengers will have no trouble finding comfort up front, especially in the bucket seats that are standard in the extended cab configurations.

Other things of note on the 2016 Sierra are the standard bumper steps for easier access to the cargo bed, the ample lighting in and around the truck (both standard and optional), and the flip-up rear seating to extend the rear seating into a flat-floor loading space. All of these made our time in the truck more than pleasant and make everyday use excellent.

Standard in the 2016 GMC Sierra is a 4.2-inch display for the audio. There isn't much to go with that, tech-wise, though two USB ports and Bluetooth are standard. Upgrading to the higher level packages or models changes that to the latest IntelliLink infotainment system which uses an 8-inch touchscreen with a lot of goodies, including Apple CarPlay and Android Auto. Navigation, satellite radio and HD Radio are also standard. From there, an upgrade to include OnStar with WiFi hot spot and other capabilities is available.

With a fully loaded GMC Sierra, users find a very easy-to-use and connected system. It's one of the best in the business, rivalling anything available elsewhere. With the fully upgraded system, there are five USB ports and in-vehicle apps via the smartphone integration. That's well beyond the expectation in today's truck market. 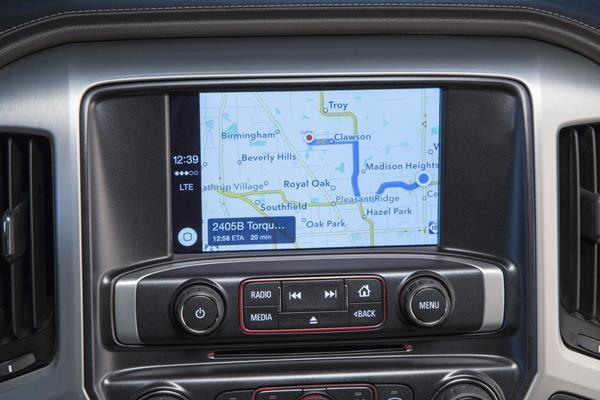 In any of the three engine options for the 2016 GMC Sierra, fuel economy is rated very well. The real world proved these to be realistic in the two engine options we tested.

The base engine is a throaty V6 that is EPA-rated at 20 mpg combined in rear-wheel drive, at 18 mpg in the city and 24 mpg on the highway. Those numbers drop a bit with 4-wheel drive to 19 mpg combined (17 city, 22 highway).

The 5.3-liter V8 engine is standard on some trims and optional on others. It is EPA-rated at 19 mpg combined (16 city, 23 highway) in RWD and 18 mpg combined (16/22) in 4WD. Our 4WD test model with this engine achieved respectable real-world numbers of 16.5 mpg all told, which included some offroad driving and some highway towing in the mix.

Finally, the top-level engine is a 6.2-liter V8 that is rated at 17 mpg combined, with 15 mpg in the city and 21 mpg on the highway whether a RWD or 4WD drivetrain is chosen. In this model we saw just under 17 mpg all told, again with some offroad and a fair amount of highway towing included.

According to the J.D. Power and Associates Vehicle Dependability Study, the 2016 Sierra is "Better Than Most" for its expected reliability. We note several recalls for the Sierra, but none are structural or mechanical in nature, and all were issued early in the model year. The warranty offered with the 2016 GMC Sierra is standard for the industry at three years/36,000 miles and five years/60,000-miles (bumper-to-bumper and powertrain respectively).

The 2016 Sierra has received good crash test scores overall. The National Highway Traffic Safety Administration rates the Sierra at 5-Stars overall. The Insurance Institute for Highway Safety gives a top score of "Good" to the Sierra in all but its small-overlap front-test result, which received a second-worst "Marginal"

- a common sticking point for large trucks and SUVs.

Standard safety features in the 2016 GMC Sierra are plentiful and several high-tech features are available, including auto-leveling headlights, lane departure warning and more. 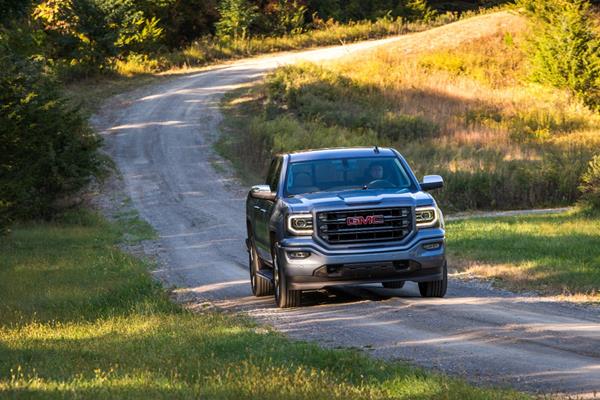 The base engine for the 2016 GMC Sierra is a 4.3-liter V6 that outputs 285 horsepower and 305 pound-feet of torque. This engine has a 6-speed automatic transmission as standard equipment. Towing is rated at up to 7,200 pounds, depending on equipment and configuration. This should be enough output and capability for occasional truck users who prefer fuel economy over muscle.

Trims like the SLT and Denali and an upgrade option on other Sierra trim levels is a 5.3-liter V8 that has been the workhorse for the GMC truck for some time. It's paired to a 6-speed automatic transmission. This engine outputs 355 horses and 383 lb-ft of torque. Towing is rated at up to 11,200 pounds, depending on equipment and configuration. Our time in a Sierra equipped with this engine proved its value as a solid powerplant for general truck use. It's not quite as throaty as the larger 6.2, but very well-tuned for a pickup of this size. Unless the trailer or bed are heavily loaded, it doesn't struggle to get things moving either.

The upper option for engines is a 6.2-liter V8 that was introduced in the 2015 model year. For the 2016 Sierra, it's again mated to a nicely-tuned 8-speed automatic transmission. This V8 outputs 420 horsepower and 460 lb-ft of torque. Towing is rated at up to 12,000 pounds, depending on equipment and configuration. We found this engine to be both throaty and responsive as well as muscular when asked to work. This engine is available only on the SLT and Denali trim levels.

One of the GMC Sierra's greatest strengths is in its excellent drive characteristics, which are enhanced by its well-made interior. The engines pulling the load are a good match for the truck and offer a nice array of efficiency and muscle.

As a more premium-level offering than most other trucks on the market, the 2016 GMC Sierra is a bit more pricey in comparison. Resale values are good, though they are neither best-in-class nor worst. Volume buyers for the Sierra tend to fall in the $38,000 to $42,000 range for purchase of a mid-level trim point. We feel that at this level, the Sierra is competitive and well worth considering.

There are several full-sized pickup trucks to choose from on today's market. The best-selling Ford F-150 is a strong offering with trim levels ranging from very low-entry all the way up to super-premium and with fuel economy numbers that are often best-in-class. The Ram 1500 is also worth considering if payload and consistent towing are your needs, especially given its excellent highway ride and available class-exclusive diesel engine. The most reliable option in the segment is likely the Toyota Tundra, though it is otherwise not very eye-catching. Against these options, the Sierra does well, especially for those who want an upscale interior and solid performance level.

The 2016 GMC Sierra is an excellent choice in the lineup of strong contenders for your pickup purchasing dollars. Beyond the commercial grade options, it's main appeal is in its excellent interior experience and nicely-rounded, though simplified, engine choices.