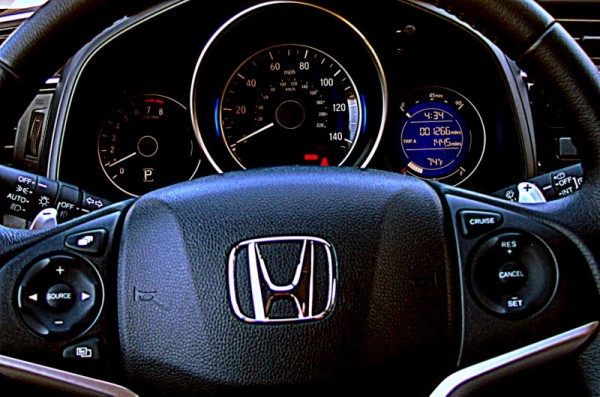 Introduction (Overall Score after 8 Categories: A)

Frankly, there is no reason that the 2015 Honda Fit shouldn't be given an A+ grade for the mere fact that it will take most competitors at least 2 to 3 total redesigns of their offerings to reach where Honda is now with this wholly amazing little hatchback. It's funny, Honda first wowed North America with a cute little hatchback that was years ahead of the competition and its name was Civic way back in 1976.

So it looks like history truly does repeat itself but we remember those first yellow Civic hatchbacks to be so cool looking to us as kids what with their mysterious CVCC badging on the back. Turns out that was just an emissions technology far more advanced than anything the Big Three could develop at the time but when you are young you can imagine it stands for all sorts of things. So now, in 2015 (come one now, it's time to stop signing your checks 2014) do we find the Honda Fit to be a worthy and truly revolutionary hatchback successor to that first Civic?

But most importantly, do we think it's cool? And more importantly to Honda, will it be cool to a broader spectrum of buyers than just little kids without driver's licenses? Read on to find out but if you have trouble focusing on anything longer than one puzzle on "Wheel of Fortune" here's the short answer. Hell yes it is cool. Now the rest of you keep reading to find out why.

(Note: Honda was kind enough to loan us two 2015 Honda Fit models each for a week. One was a fully loaded EX-L model with a CVT automatic, high grade leather seats, moonroof, heated front seats and more for just $19,800. To let us have a feel of the trim level beneath and experience the available six-speed manual gearbox Honda also loaned us an EX trim level Fit which came to $17,435 due to the absence of leather, the automatic and heated front seats. This review will discuss both versions.) 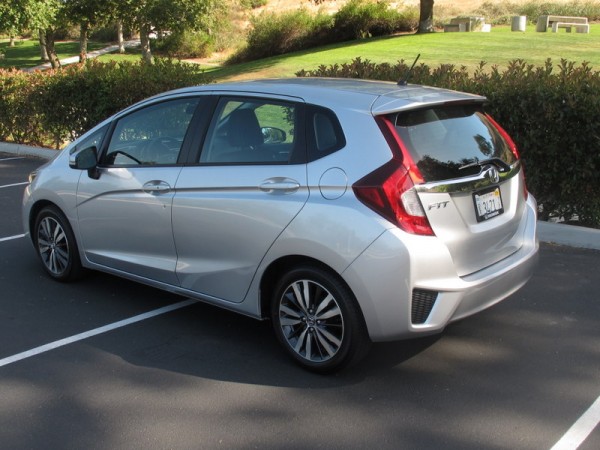 What We Loved about the 2015 Honda Fit

What We Didn't Love about the 2015 Honda Fit 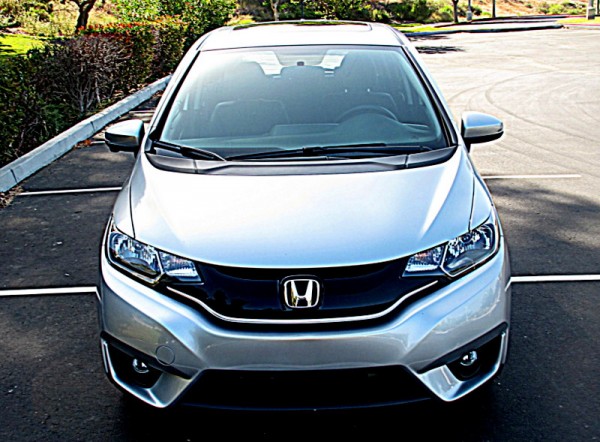 The 2015 Honda Fit was truly a quantum leap forward for all subcompact cars as it simply outshines them all with its capabilities, flexibility, efficiency, build quality, value for money and fun to drive demeanor. We think the new Fit was an excellent step ahead for the look of Honda's smallest model as it now lacks any resemblance to a small delivery van. The creases in the sheet metal along with the handsome tail lamp and head lamp designs work together perfectly to give the Fit a youthful and stylish presence. A great effort from Honda that looks like nothing else on the road.

No doubt every automaker out there with at least one small car offering has more than one 2015 Honda Fit vehicles deep within their engineering centers for the sole purpose of tearing them apart to learn how Honda built such an amazing small car. How is it that the interior of the 2015 Fit somehow manages to feel roomier than your average Manhattan apartment? If you consider the fact that the Fit comes with an HDMI cable port which allows you to play HD video from your Smartphone or Tablet when the car is stationary, the resemblance to a rolling studio apartment becomes even more evident.

While some may find anteing up the extra cash for the EX-L model with its leather seating and heated front seats, we must admit that it elevated the luxurious feel of the interior to a new height we have never experienced in such a small car. The leather could easily be from Acura and makes a nice contrast to the squishy padded soft touch plastics all over the cabin. But whichever way you choose to go the Fit is solidly assembled with materials all definitely chosen to last the test of time and kids and family and dogs.

Under the rear cargo cover the Fit offers 16.6 cubic feet of cargo room which is plenty for anyone's day to day chores. But if you need to move to another state, drove the "magic" rear seats and that figure grows to an SUV rivaling 52.7 cubic feet of cargo room with a completely flat load floor. It also makes for a decent place to sleep (not that we did that) if you ever go camping somewhere you don't want a rattlesnake climbing into your sleeping bag with you at night. Seriously, no matter what you need it for the 2015 Honda Fit delivers. 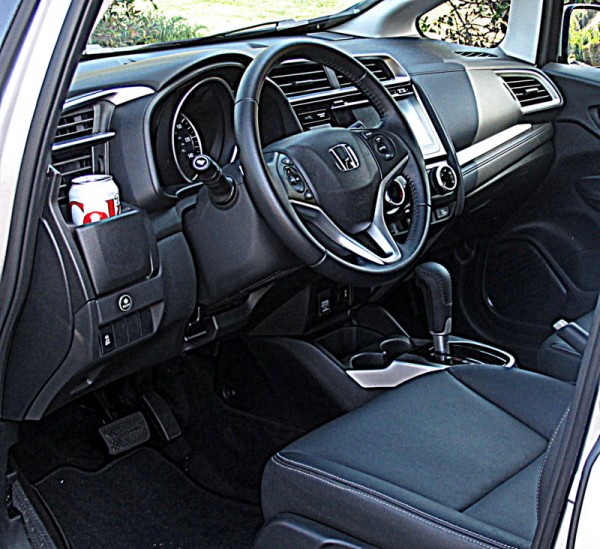 The Fit would have gotten 10 out of 10 in this section if only for one small failing which we eventually learned to work around—the center audio/nav/infotainment screen has no volume knob but rather an odd slide scale you have to rub your finger across. Now this works, sort of, but is difficult to work accurately if at all should your hands be wet, oily or uncoordinated. Thankfully there is a volume switch on the Fit's steering wheel so we got over that failing quickly but still Honda, a volume knob would be nice. For us old folks.

Models from EX on up come standard with push button start, keyless entry, a back-up camera with multiple views, the handy Honda Lane Watch system which puts a picture of what's in your right rear blindspot onto the center mounted 7-inch touchscreen, SMS Text Messaging which reads you your texts, two separate USB ports, the aforementioned HDMI port which can turn your Fit into a movie theatre as well as a perfectly suitable 6-speaker 180-watt audio system which may not be the last word in power but it remains nicely clear through the volume range. 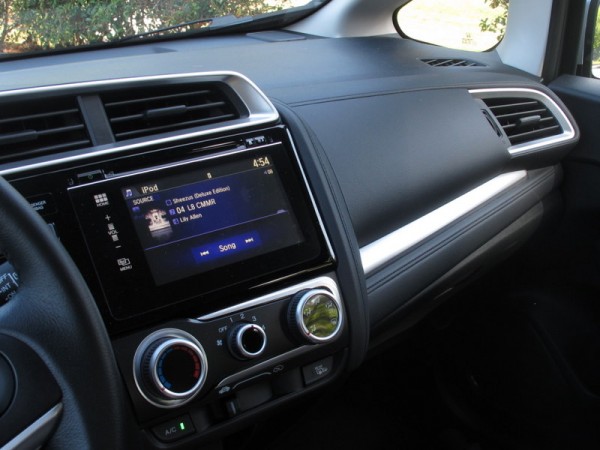 The CVT automatic equipped 2015 Honda Fit is EPA fuel economy rated at 32 city/38 highway whereas our EX manual transmission tester is EPA rated at 29 city/37 highway. Both run on regular unleaded and in a week of real world driving we saw 33 from the CVT equipped variant and 31.8 from our manual transmission tester. We blame the CVT perhaps not being as frugal as possible on its addicting paddle shifters on the steering wheel which turn this little Fit into a rev happy go-kart. Fun and economical, can't beat that.

Predicted Reliability and Initial Quality Ratings (10 out of 10)

Ever notice how many really, really old Hondas there are still on the roads? You know, from even way back in 1990? That would make that car 25 years old which is something few cars manage but we guarantee every day you probably see at least one Honda about that age still on the road. It's just commonplace and expected for a Honda to be reliable which you'd think would eventually harm them in surveys if customers were disappointed. Not so says J.D. Power and Associates which raves about all generations of the Fit quality wise and this 2015 model is apparently doing well in initial quality surveys. So all signs point to your 2015 Honda Fit not needing replacement until possibly 2040. 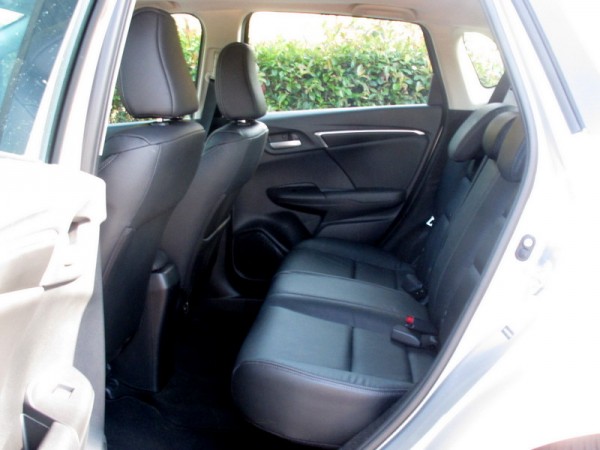 The 2015 Honda Fit scored an overall "Top Safety Pick rating from the IIHS (Insurance Institute of Highway Safety) which gave the small car top marks for front offset, side impact, whiplash protection and roof strength but received an "Acceptable" grade in the very difficult to pass small front overlap test which mimics the impact forces if a vehicle collides with a stationary object like a pole or tree. "Acceptable" is just one level below the IIHS top ranking of "Good" so it's not as if the Fit still isn't one of the safest models in its size and price class.

Right away in the CVT auto equipped EX-L tester we noticed that the 2015 Honda Fit felt much peppier off the line with plenty of zip left over for most passing situations thanks to a 1.5 liter 130 horsepower VTEC 4-cylinder that is simply mad for revs. And by some miracle Honda's CVT doesn't stunt the engine's performance in any way, in fact we felt after trying both gearboxes that it might be the best suited to this car thanks to handy paddle shifters which allow the driver an impressive amount of control. The engine can be manic when pushed but the CVT never lets it rest in that zone too long and quickly you find yourself cruising calmly yet again in the impressively quiet cabin.

Now, the ride is decent over most surfaces but the Hyundai Accent absorbs bumps better than the Fit most especially speed bumps which can cause passengers to take unexpected bounces into the air. Good thing the roof isn't very close to passenger's heads. So slow down over speed bumps. Steering feel is more linear and smooth than last year's model which some say makes it feel less sporty to drive. We think the new steering calibration gives the Fit a more grown up feel behind the wheel, less susceptible to cross winds and less apt to over react to steering inputs. Cornering prowess is go-kart like and always fun.

As for the six-speed manual transmission equipped 2015 Honda Fit EX, we no longer feel it is necessary to shift for yourself in this car (unlike last year) to really enjoy driving it. Gear ratios seem close together so you wind up shifting quite a bit in the 2015 Fit not that it is any hardship with its short throw, crisp and tight gearlever mated to a very forgiving clutch. But at times it does make the driving experience feel more manic and less relaxing. So, decide which kind of Fit you want. Manic or slightly medicated? 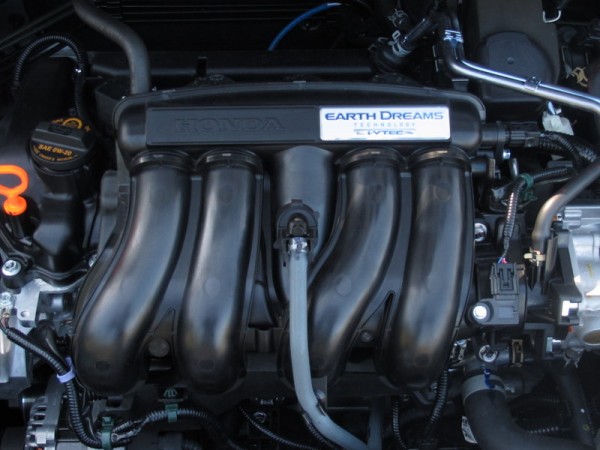 Basic LX Fit models start at just $15,650 but we recommend you stump the extra $1,800 or so for the EX as it nets you alloy wheels, a power moonroof, push button start, keyless entry, SMS hands free text, a more powerful audio system, Honda Lane Watch, the upgraded 7-iinch HD center screen with second generation Honda Link which allows you to access many iPhone functions without touching your phone as well as the additional USB port and HDMI. All in all, we doubt you will ever lost the extra outlay for an EX as on the used market they will be more sought after than LX models so more than likely you will get that money you spent back one day.

The EX-L with its leather, heated seats and feel of lovely luxury comes in at $19,600 with a standard CVT auto and as dog owners, we would probably go for that model simply because it would be easier to clean. And we don't like to ride around on cold seats on cold mornings either. Just because you bought an intelligent, small, fuel efficient car does not mean you should have to live without. 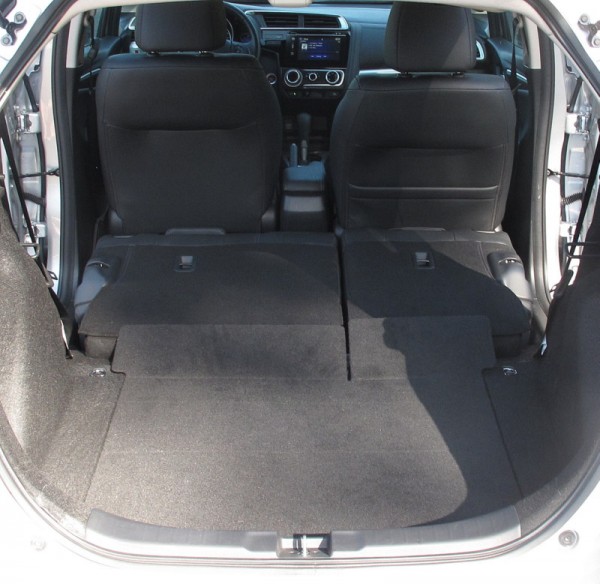 "The Final Numbers" and the Competition (75 points out of 80)

The only thing the 2015 Honda Fit may have to fear a little is the upcoming 2016 Mazda2 which will no doubt go toe to toe in the style, fun to drive and affordability stakes but we doubt it will beat the utility on hand here in this small car that is somehow "enormous on the inside." But that is the 2015 Honda Fit's parlor trick, in fact it always has been so we aren't sure why no one has copied the formula. Well, it has sure given Honda plenty of time to dominate this segment even if its sales don't match those of the Versa/Versa Note which quite frankly only sell based on their low prices because the sedan especially is the definition of an old school subcompact torture chamber. The 2015 Honda Fit, however, is in a whole other classier class all by itself. 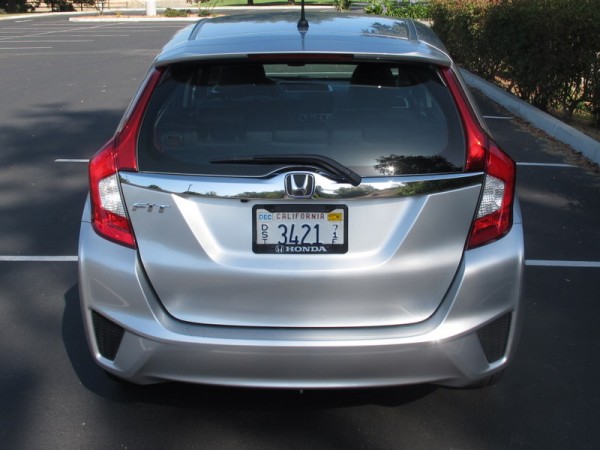