Overview (Final Score: B+)
The 2015 Escalade is an all-new design for the widely appealing sport utility. The luxury class is competitive, with both high profits and tough audiences being at stake. The Escalade is most well known for its bold design, powerful V8, and bling-tastic curb presence.

For the 2015 model year, Cadillac has improved the Escalade's looks, upgraded its interior, and added more standard features and high-tech safety options. It's a compelling combination of street cred and suburban luxury. 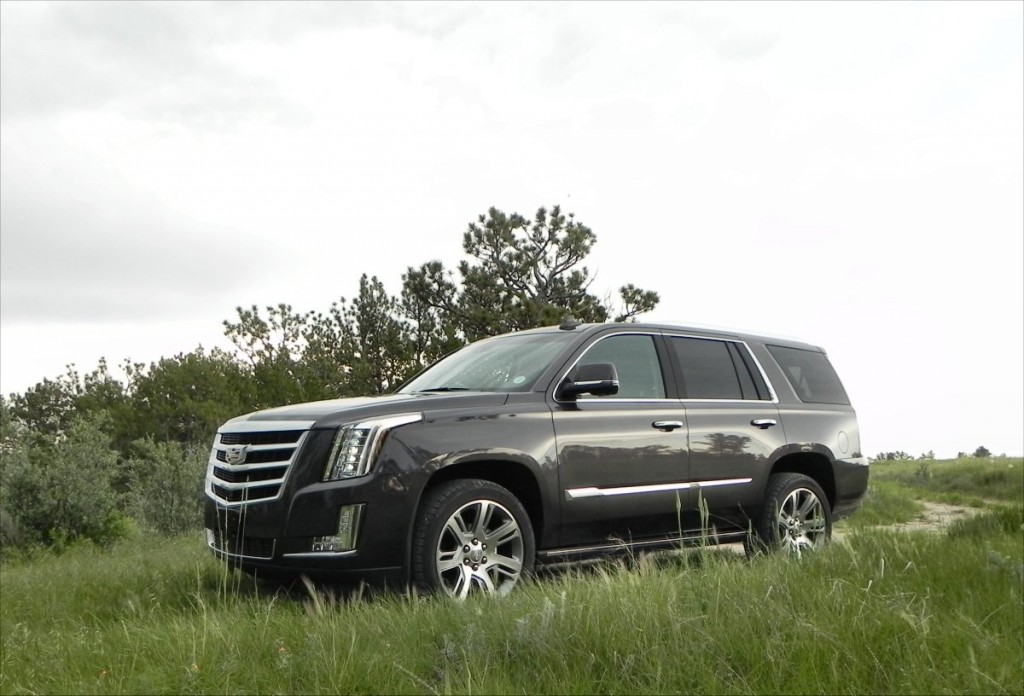 What We Loved About the 2015 Cadillac Escalade


What We Didn't Love About the 2015 Cadillac Escalade 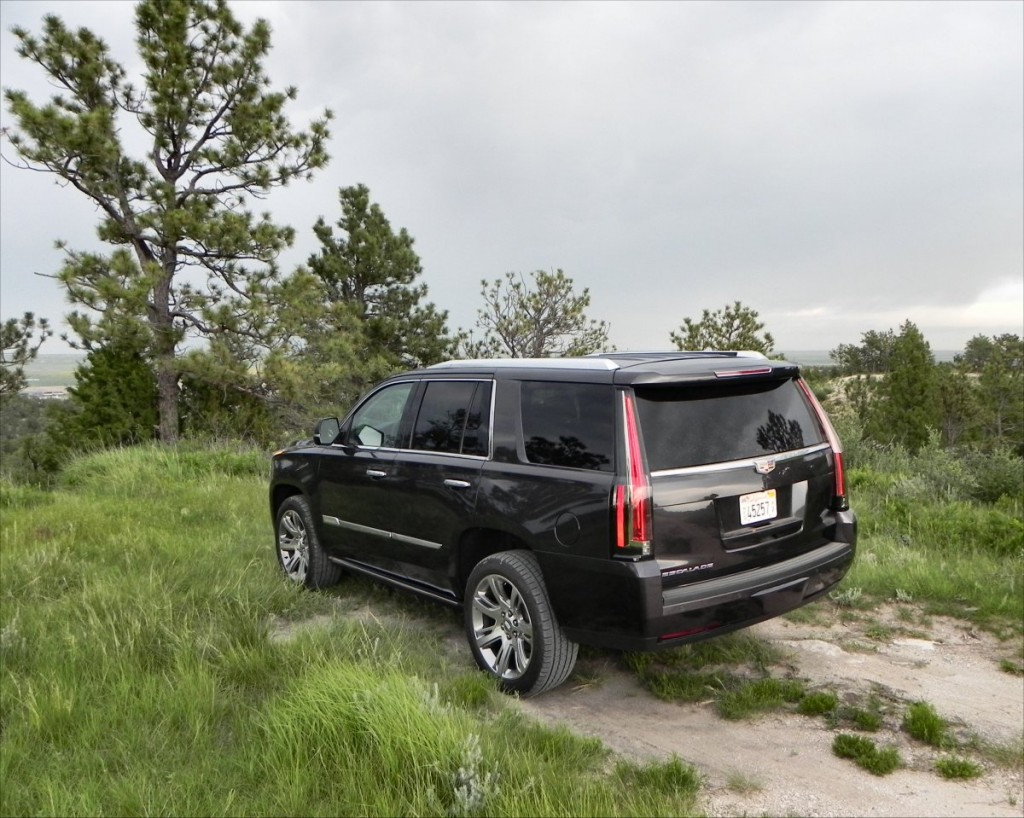 Exterior View (8/10 relative to market)
The Cadillac Escalade has been almost entirely redesigned for the 2015 model year, though the exterior remains largely the same with most of the changes to it being subtle. Styling is a bit blockier overall, with a more squared off front nose and a less pronounced bulge to the rear hatch. To enhance this squareness, the 2015 Escalade also features nearly straight pillars, square window edges, and sharp corners throughout the exterior design. Even the wheel wells are rounded-off squares. Cadillac is already well-known for its sharp-edged design throughout its lineup.

This edginess creates a distinctively blocky and somehow refined look for the 2015 Escalade. It's a polarizing, but good look for the car that the president has dubbed "The Beast." As in previous years, the 2015 Cadillac Escalade can be had in upscale, suburban colors or blacked out, bling-enhanced urban styles. We had something in between with the Dark Granite Metallic gray color and the addition of extra-large, bright wheels (22-inch, 7-spoke ultra-bright alloys, an $800 option). 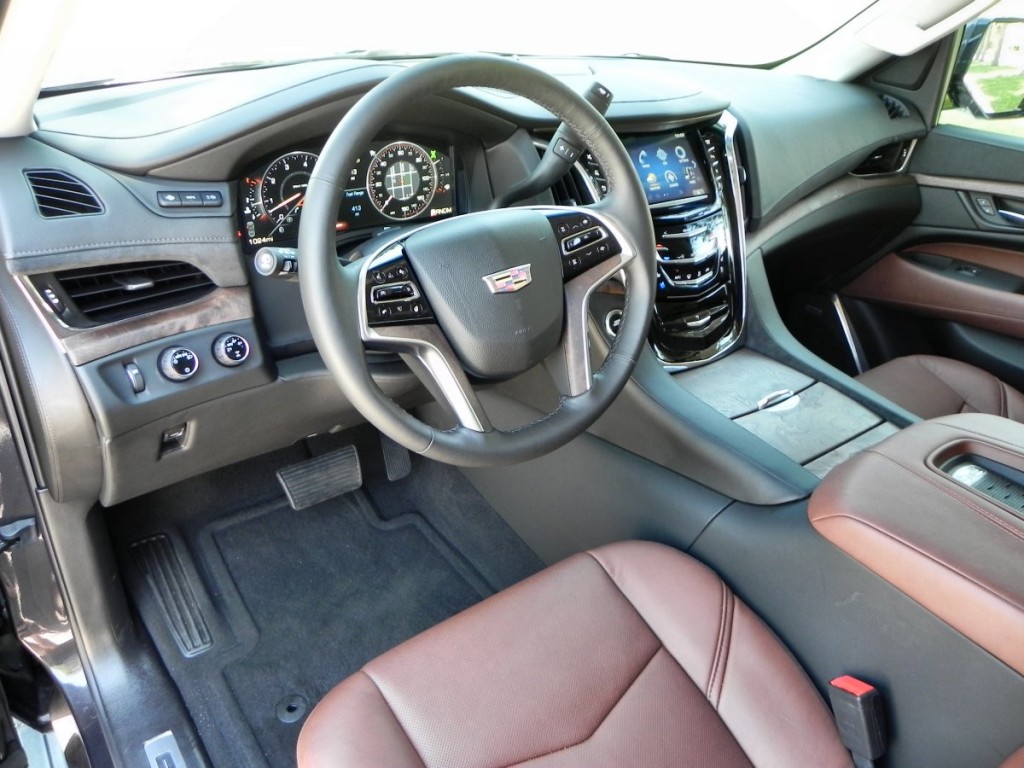 Interior Comfort, Quality, Ergonomics (9/10)
Where the exterior of the Escalade may be polarizing to some, the interior is downright mesmerizing. The Cadillac's interior design is upscale and eye-grabbing, especially with the optional Kona leather upgrade we enjoyed in our test model (a pricey, but excellent $2,000 upgrade). With three rows of seating, the 2015 Escalade also offers the capability to carry up to eight in style.

The front seating is roomy, comfortable, and very adjustable. The dashboard of the Escalade is dominated by an inset touchscreen where the CUE infotainment interface resides. The high-resolution screen is a welcome point within an already well-designed dash. The screen sits atop a control interface that is split into thirds, with the second third being climate controls and the bottom being the audio system. The middle third also fronts a hidden compartment that can be opened when the bottom is touched to reveal a cubby with a USB plug and felt-lined area large enough for a music player, phone, charging cords, and the like.

The instrument cluster is a very attractive digital display on which dials and vehicle information are created. These can be adjusted or personalized as well.

The second row is also spacious, the default being a captain's chair arrangement ahead of the third row bench. This reduces total passenger capacity to 7, but adds a lot of comfort to the second row for adult use. These captain's chairs fold down and forward to create either a flat loading surface or move out of the way for easier access to the third row. The third row is mostly sized for children and folds forward with a button press. 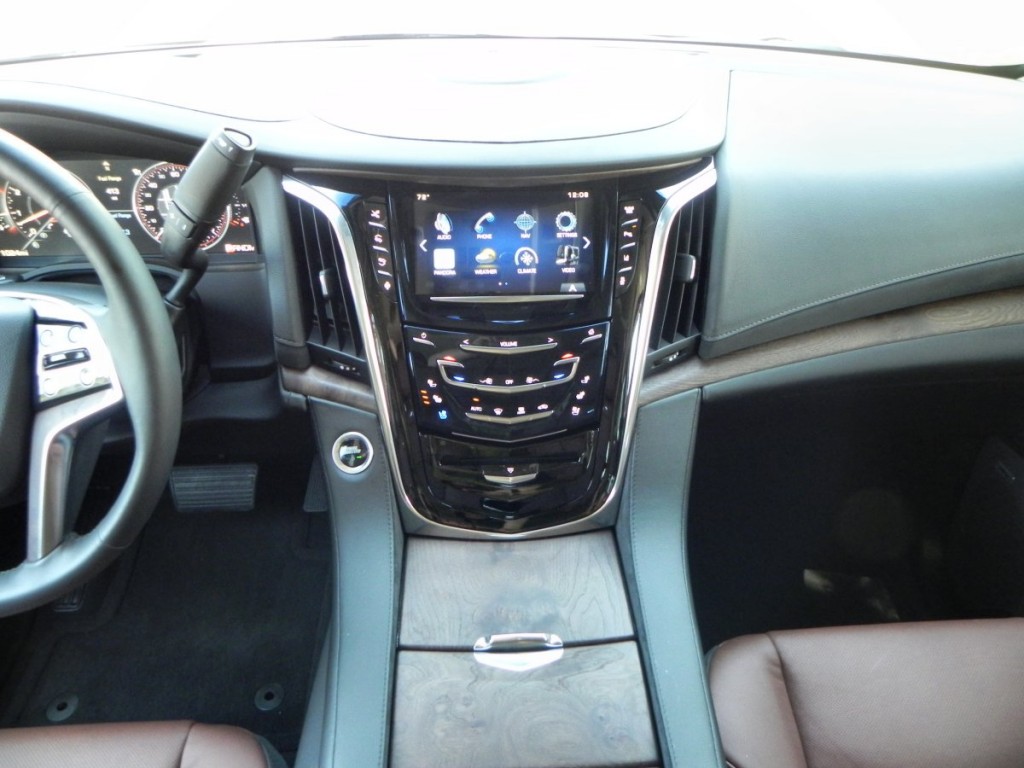 Technology (7/10)
The Cadillac CUE system has its high and low points. It's a beautiful display with the basics, such as radio tuning and climate controls - being simple and easy to use. Beyond that, however - when loading apps or using the navigation - the interface can become clunky and frustrating to the uninitiated.


Fuel Economy (8/10)
In a sport utility of this size, especially in the luxury segment, fuel economy is a relative measurement. The 2015 Escalade has an EPA rating of 17 mpg combined for both the rear-wheel and four-wheel drive models equipped with the eight-speed automatic transmission. In the real world, we saw about 16 miles per gallon overall in our week-long test of the Escalade Premium 4WD with the eight-speed auto.

We note that the 2015 Cadillac Escalade has an early issue transmission offering only six speeds, which reduces the 4WD model's fuel economy to 16 mpg combined. For comparison, the Lincoln Navigator returns up to 22 mpg on the highway, which is the same that the Escalade in similar packaging will rate. 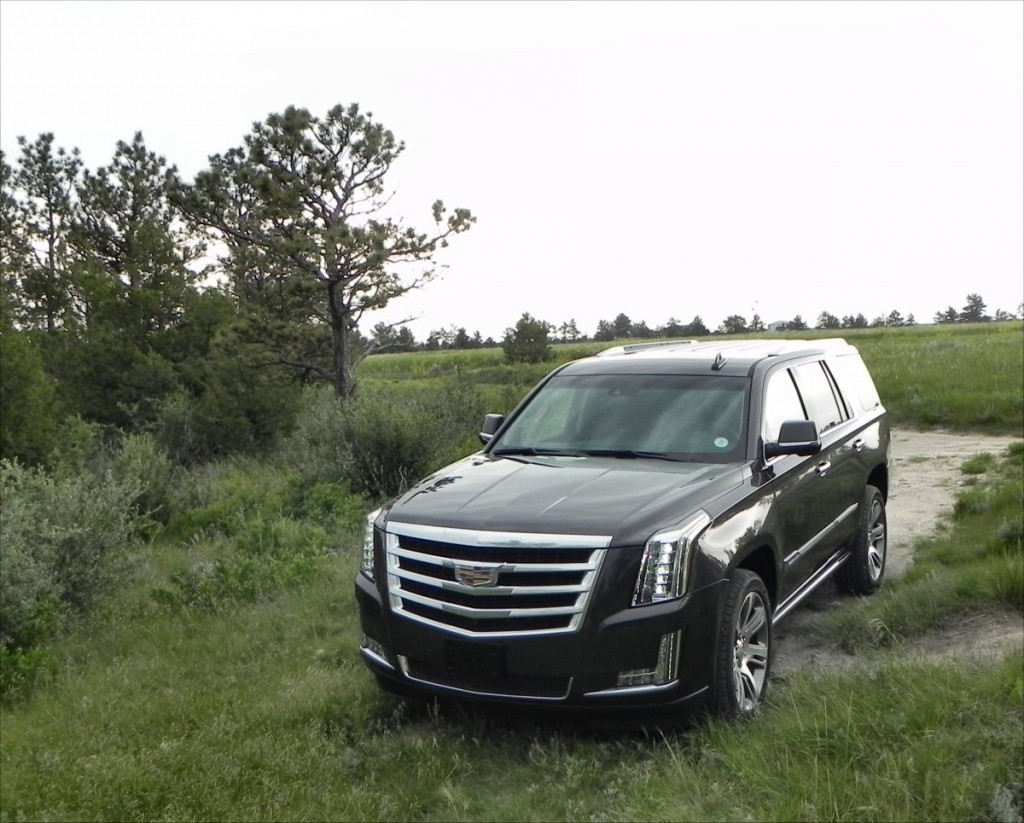 Predicted Reliability, Initial Quality Ratings (7/10)
Most reliability ratings for the 2015 Escalade are only slightly above average, with J.D. Power giving it a 3.5-circle rating in its Power Circle system from its Vehicle Dependability Study. Recalls for the Escalade have all been airbag-related as the Takata fallout continues. The 2015 Escalade includes a four-year/50,000-mile limited warranty and a six-year/70,000-mile powertrain warranty.


Safety (8/10)
The 2015 Escalade was given a 5-star side crash test rating from the National Highway Traffic Safety Administration (NHTSA), but only a 3-star rating for rollover. As of this writing, the Insurance Institute for Highway Safety (IIHS) has not crash tested the 2015 Escalade.

A full suite of safety equipment adorns the top-most package levels of the 2015 Cadillac Escalade. Standard equipment in all models include a rearview camera, front and rear parking sensors, side airbags in the first and second rows, and OnStar with crash notification. Upper trims add lane-departure warnings, forward collision and rear cross-traffic alerts, and both forward and reverse collision mitigation and automatic braking systems. We especially like the safety warnings, which are given through the seat, vibrating to indicate the direction of the danger. This is far more informative and helpful than random beeping. 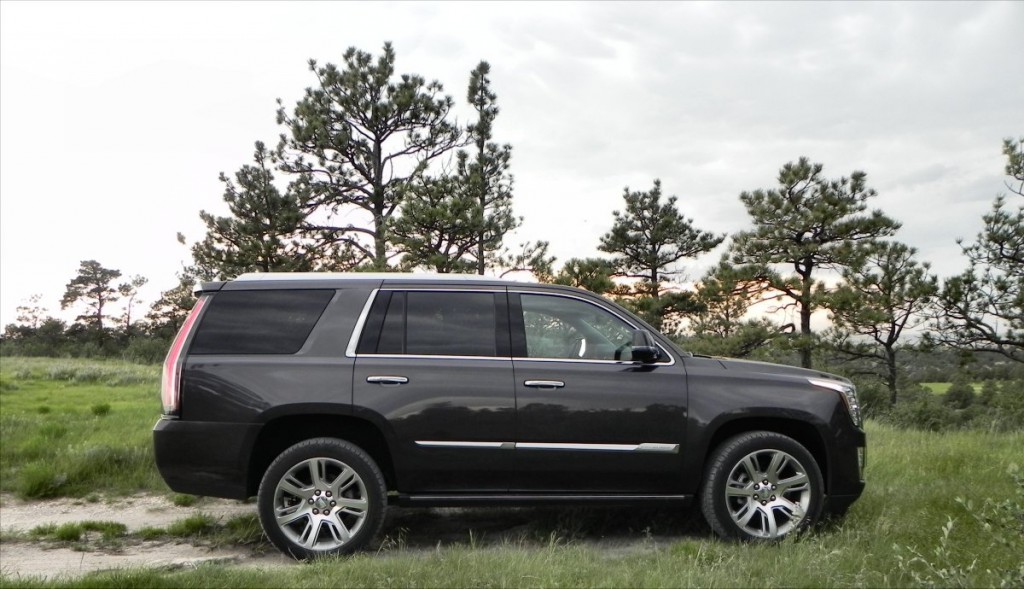 Performance (9/10)
The 2015 Cadillac Escalade is powered by a muscular 6.2-liter V8 engine producing 420 horsepower and 460 pound-feet of torque. This same engine can be found in the GMC Sierra pickup truck and gives the Escalade a maximum towing capacity of an impressive 8,300 pounds.

The V8 powering the Escalade is coupled to a six-speed automatic transmission as standard up to the October 2014 build date. After October of 2014, the Escalade began to be equipped with an eight-speed automatic that improved fuel economy marginally, but aids drivability and towing with the added gearing. Both rear-wheel and four-wheel drive are available.

Being a truck-based sport utility, the 2015 Escalade is not a sports car on the road. It is comfortable and well-mannered on the highway, however, despite its truck roots. Steering is generous, but not sloppy and the ride is easy going and very quiet. The engine roars from the outside, when pressed, but delivers only a low growl inside the Escalade when the pedal is stomped. Visibility is quite good in the Escalade and cornering is stable, even at speed.


Pricing and Value (7/10)
The base price for the 2015 Escalade is about $73,000 (sans delivery) with our test model tipping the price scale to just over $89,000 (delivered) with trim upgrades and options. For that, the Escalade delivers a lot of luxury and comfort. Compared to others in the luxury SUV market, the Escalade is one of the more expensive.

Despite being luxurious and well-made, the Escalade as a model does not have a strong history of high resale values - a common trait in the luxury marketplace. It's high price only accentuates this trait, making it a lower short-term value to the buyer than some rivals may be.

In terms of fitment and amenities for the price, though, the Cadillac Escalade delivers well with a strong combination of luxury and capability. 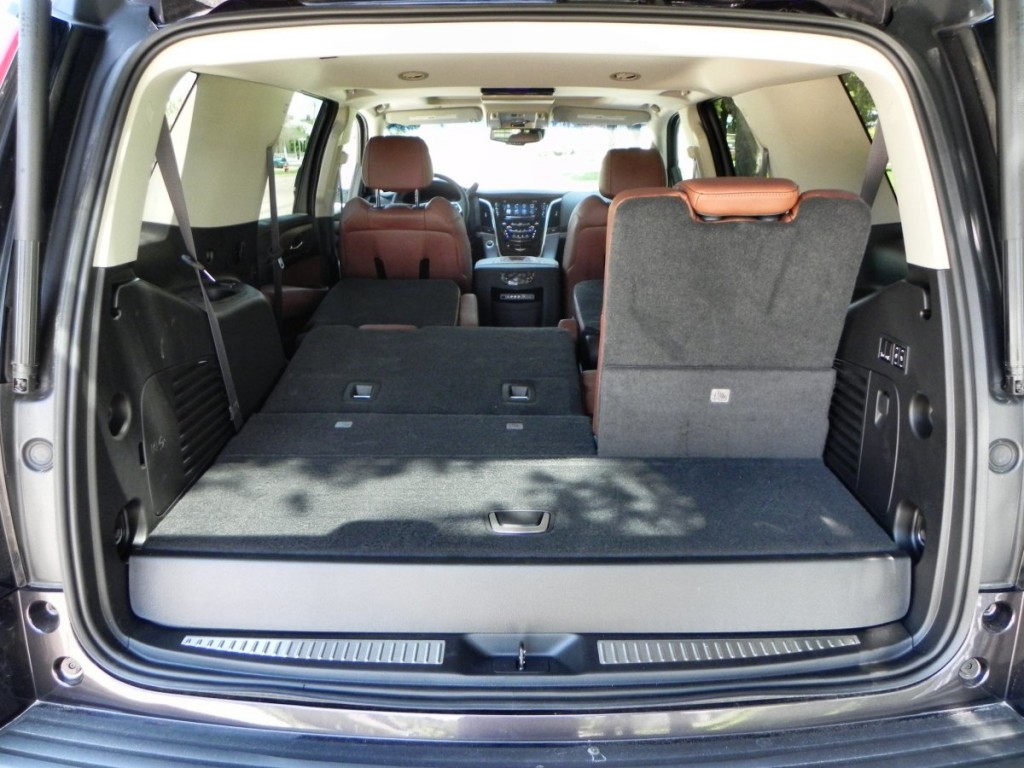 Total Score and Competitive Comparison (63/80, 78.7%)
Competition in the luxury SUV segment is large and powerful, as are the vehicles within it. The Lincoln Navigator is a lower-cost, less luxurious option that competes well with its own redesign for 2015. The price-competitive Lexus LX 570 is a more offroad-capable SUV in the luxury segment. The somewhat more expensive Mercedes-Benz GL-Class has a better driving experience for those who prefer a more sport-tuned SUV. In addition, both the Mercedes and Lexus offer a more adult-friendly third row. Finally, the Infiniti QX80 is a strong and very luxurious competitor for the Escalade and is also offered at a lower price point.

In terms of total package for the price, however, there are few competitors to the 2015 Escalade and none can offer that bold Cadillac look. Ultimately, the look, persona, and well-rounded luxury of the Escalade are its most compelling points.