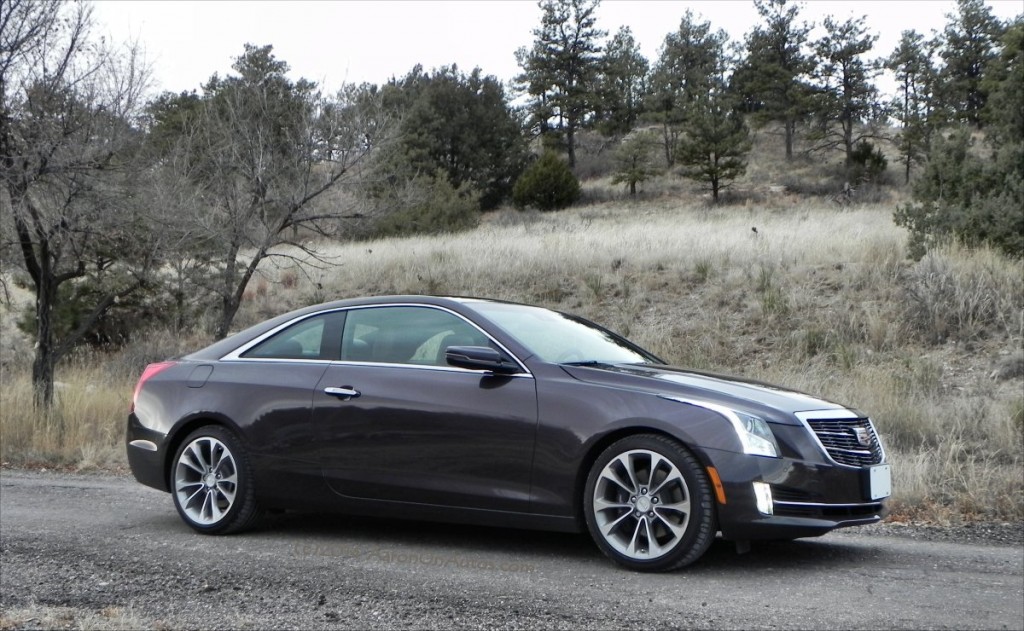 Overview (Final Score: B+)
The luxury sedan and coupe markets are replete with solid entries that often focus on sport and refinement. The European makes generally dominate this class, especially at the entry level where the 2015 ATS resides. The German offerings in this segment are often second to none. Against them, Cadillac has offered the ATS as a surprisingly strong rival with a unique, American take on things that brings a lot of appeal.

The 2015 Cadillac ATS Coupe is all-new for this year, becoming a two-door sidekick to the ATS sedan. This new coupe is especially compelling thanks to its different approach to the luxury sport coupe market when compared to BMW and Audi, who normally own this segment. Together, the Cadillac ATS sedan and coupe offer a strong one-two punch to the luxury market.


What We Loved About the 2015 Cadillac ATS


What We Didn't Love About the 2015 Cadillac ATS 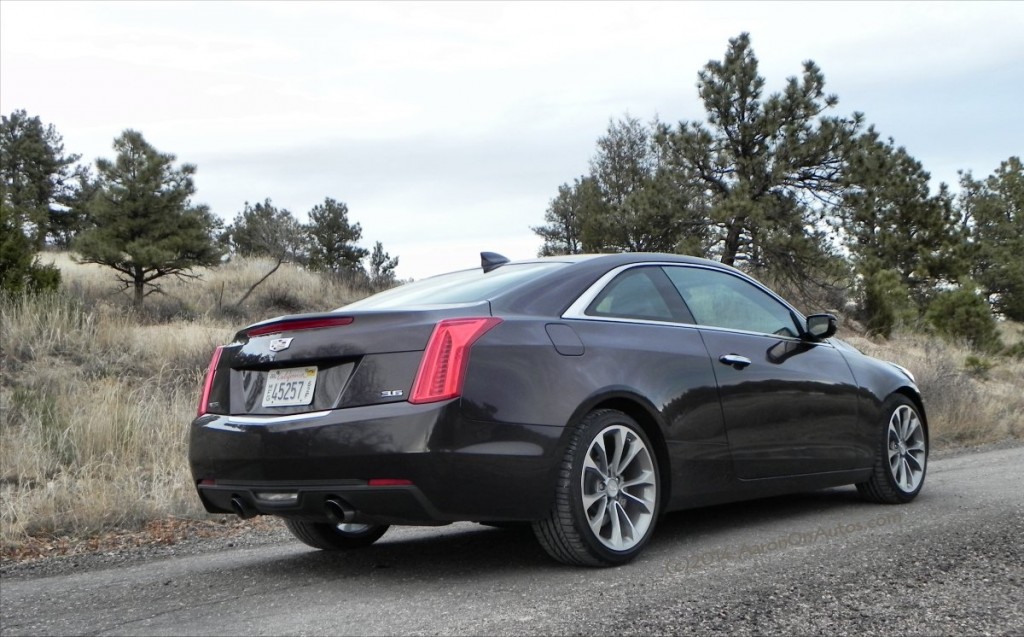 Exterior View (9/10 relative to market)
Cadillac is known for bold styling and didn't skimp on the idea with the design of the 2015 ATS and ATS Coupe. The sharp "beak" nose of the Cadillac of last-generation is gone, replaced with a less pronounced center crease running from the hood down through the grille and fascia. This continues the bifold design Cadillac uses, but de-emphasizes the long-nosed, sharp prow from before. It's a much more refined look.

That crease becomes a sort of mirror point where each side reflects the other when seen from head-on. Peering headlights run back along the fenders and LED fog lamps (on some packages) below them are the first thing noticed. The prominent Cadillac badge at the center of the grille and chrome with light metallic touches finishes the grille work above and in the scoop below. Lines on either side of the hood give energy to the deep cut fender points.

All of this moves into a tapered roofline that is followed by a chromed beltline below. The body panels carry thin bone lines that add a sense of movement without being prominent and a deep cut at the bottom of the doors finishes the style. A fastback roof and clipped trunk with a solid, squared rear end complete the car.

All together, the impression of the 2015 Cadillac ATS as a whole is one of forward movement and rear-drive muscularity. The car angles slightly forward in both its lines and its stance, and the swept-back headlights and forward-pointing tail lamps accentuate that. It's a great look overall and unique for the luxury sedan and coupe classes. 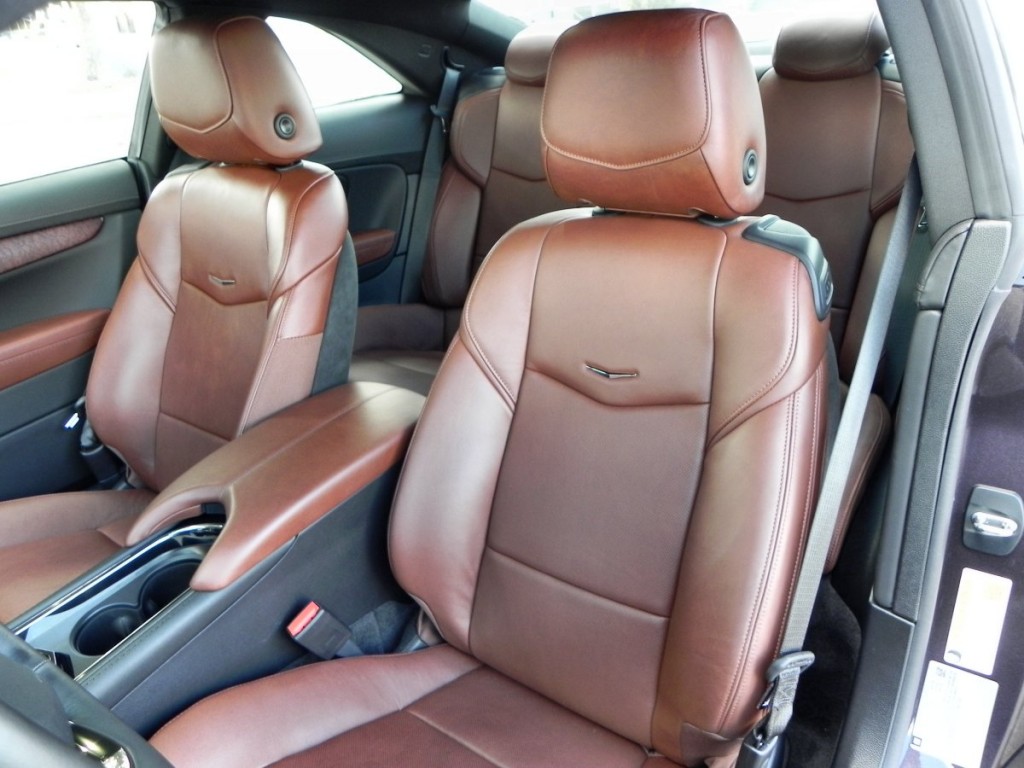 Interior Comfort, Quality, Ergonomics (9/10)
Very few people will find the interior of the 2015 ATS to be anything but striking and plush. In its top fitting, the ATS sports no fewer than four layers of materials in the mix, all of which are of the highest quality. Optional additions like Kona Brown leather fit alongside wood and chrome inlays and black, soft-touch materials.

Some might find this look a bit ostentatious, but we feel it rides just on the edge of being over the top, but remains firmly in the "sumptuous and above par" category.

Driver's controls and interior ergonomics for the front passenger are excellent. We especially like the new Cadillac layout for steering-mounted audio, phone, and cruise controls. These are intuitive, easy-to-use buttons and toggles that quickly become eyes-free in use. Add to that the newly-updated CUE infotainment system, which we'll discuss below. 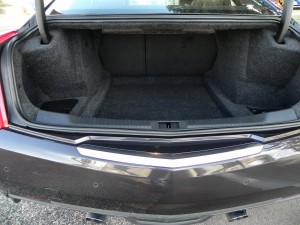 In the rear, seating is a bit smaller than in some rivals, but will accommodate two adults, three children, or a combination of those without fuss. The greatest cramp points there are in headroom and legroom. Taller folks will be a bit disappointed in the back seat. For most buying in this class, however, that is not likely a concern. The rear seats in the Coupe model are what you would expect: mostly for insurance purposes and not of much use to grownups.

We also note that the split-fold rear seating is only had in the upper trim points and they don't fold at all in the Coupe model. Trunk space in both the sedan and coupe models of the ATS is small at just over 10 cubic feet.


Technology (8/10)
Infotainment in the 2015 Cadillac ATS is centered on the newly-updated CUE system and its beautiful bright, crisp display. This system features a low learning curve, especially with its smartphone-like swipe and gesture additions. There are some glitch points, however, and the CUE system is not always as fully-functional as some rivals. We also note that it's a touchscreen interface rather than a command knob interface as with many European rivals. This may or may not matter, depending on your expectations - and possibly the length of your arms. We do like the haptic feedback ("pulse") and button color change that indicates a selection, though. This reduces confusion.

The CUE system sometimes takes a moment to respond, which can be frustrating for the user. Its greatest downside, though, is in its built-in controls for things like volume and other slide bars. These are impossible to use while driving and far less functional than the physical knob on the dash or the button controls on the steering. We suspect most people will ignore the sliders altogether except when initially adjusting stereo output mixes. The same goes for the climate controls, which are easier to use with the physical array than the infotainment.

Considering the expected market for the ATS, we think the infotainment is largely spot-on for most buyers. It could use some improvement, but no more than most rivals could. 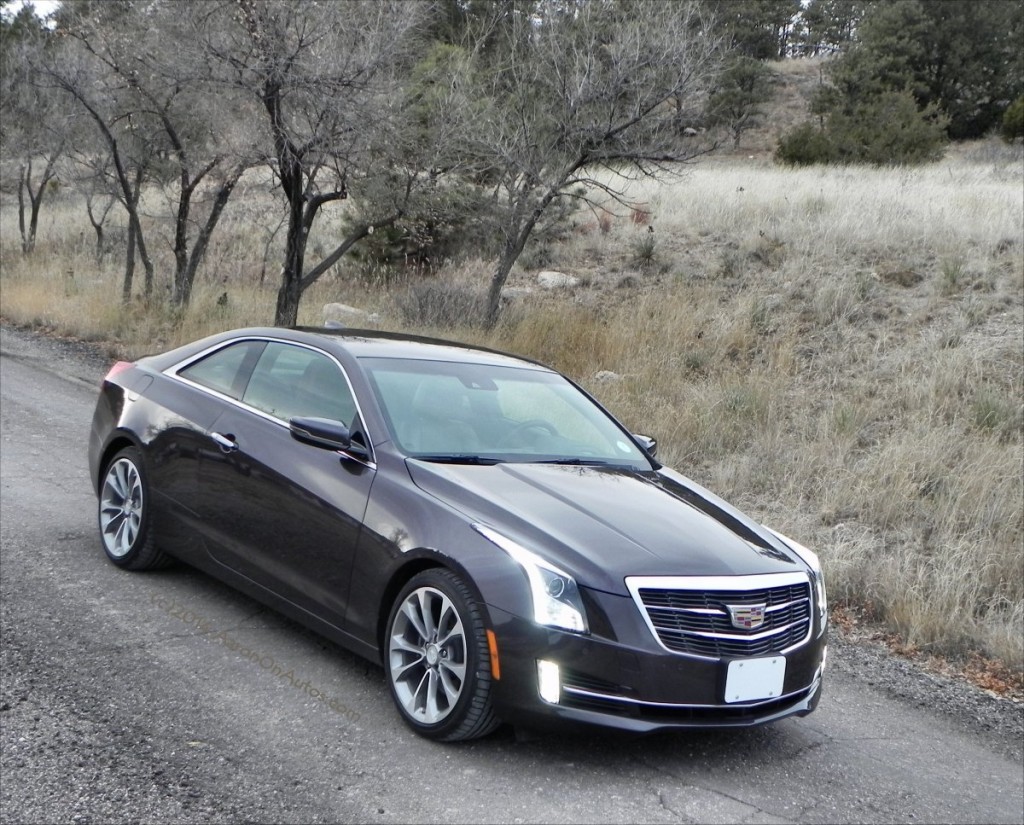 The ATS Coupe model comes in either the 2.0 Turbo or the 3.6 Coupe models. These achieve an EPA rating of 24 mpg and 22 mpg combined, respectively. Adding all-wheel drive drops the 3.6's EPA rating by 1 mpg.


Predicted Reliability, Initial Quality Ratings (8/10)
The J.D. Power and Associates Vehicle Dependability Study rates the 2015 ATS as somewhat above average in expected reliability. This is the second year for this-generation ATS sedan and the first year for the Coupe and the only recall for the car has been for a sunroof problem, which requires replacement of the trim plate around the sunroof's switches.

Given the low amount of recalls, especially for a General Motors vehicle, and high expected reliability from J.D. Power, we rank the 2015 Cadillac ATS well here. 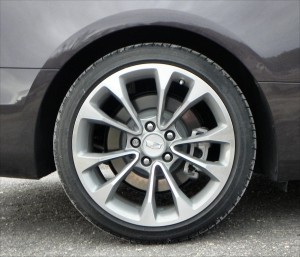 The 2015 Cadillac ATS received a 5-Star crash test rating from the National Highway Traffic Safety Administration but has not been crash tested, as of this writing, by the Insurance Institute for Highway Safety. We expect it will do well there too, given its excellent array of safety equipment and options.

The ATS sedan and Coupe come with all of the expected safety items as standard equipment, including OnStar crash notification and on-demand roadside assistance. Options packages add side airbags for the rear passengers in the sedan and electronic measures such as forward collision alert, lane departure warning, lane keeping assistance, etc. to both the sedan and coupe models. Other options also include blind-spot monitoring, active collision mitigation at low speed, and others. We note that the collision mitigation system works in both forward and reverse, which is unusual in the entry-level price point for luxury cars.

Cadillac has an excellent lane keeping system which vibrates the seat to indicate which side of the car is crossing over the line, mimicking the feel of highway vibration strips. This makes the system intuitive - far better than a generic beep.


Performance (7/10)
Some who expect the ATS to be a sport sedan or coupe may be disappointed in it. The 2.0 Turbo and 3.6 models, especially in the Coupe, are excellent driving vehicles with just enough sportiness to make them great on-road performers, but true sports car lovers will still consider them sub-par compared to some other makes. For the majority of buyers in this segment, however, the 2015 Cadillac ATS models are great choices that offer sports car-like experiences without the intimidation or expense of a true sports car. 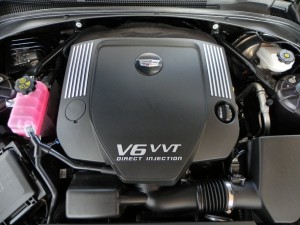 The base engine in the 2015 ATS sedan is a 2.5-liter four-cylinder engine that outputs 202 horsepower and 190 pound-feet of torque. This comes in rear-wheel drive only with a six-speed automatic transmission. For those not interested in sports performance and more interested in fuel economy, this is an easy choice.

Both the Coupe and the sedan ATS models have a 2.0 Turbo model which utilizes a 2.0-liter turbocharged four-cylinder that produces 272 horsepower and 295 lb-ft of torque. This is a very peppy little engine whose low-end torque is its main selling point. Good drivers can expect zero to sixty mph times in the six and a half second range for the sedan and slightly better than that in the ATS Coupe. A six-speed automatic transmission is standard, but a six-speed manual transmission is available. Either drivetrain can also be equipped in RWD or AWD. Expect slightly slower 0-60 times in AWD.

At the top of the line is the ATS 3.6 with its 3.6-liter V6 that pushes 321 horsepower and 274 lb-ft of torque. A six-speed automatic transmission is the only option, but FWD or AWD can be had with this engine. The ATS 3.6 sedan can return sub-6s 0-60 sprints with this engine and the Coupe can close that down to 5.5-second times in RWD.

In everyday driving, the V6 engine was a beautiful mix of performance, engine sound, and fun. When pressed, intake baffling and sound resonance was very well done and otherwise remained quiet and unobtrusive on the road. Handling is precise and nimble, especially in the Coupe model, and with top-notch comfort, the Cadillac ATS is a lovely cruiser. 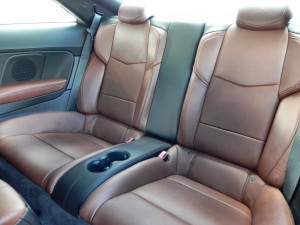 Compared to others on the market, the 2015 ATS falls into the lower end in terms of entry-level pricing, but also has less included with its base model. At the more common mid-level point, the 2015 Cadillac ATS in its sedan format is generally on par with the segment in terms of pricing and accouterments. The Coupe, however, is a bit more affordable than some rivals, especially the German makes it is most often compared with. At their highest points, both the sedan and Coupe are solid values compared to most of those same rivals.


Total Score and Competitive Comparison (64/80, 80%)
The 2015 Cadillac ATS hits the mark and lands right in the middle of the small luxury sedan and coupe market. In sedans, the ATS fares about average compared to its competition. The BMW 3-Series dominates this market and rivals like the Audi A4 and Inifiniti Q50 are strong competitors with a lot to offer. The new Mercedes-Benz C-Class is also difficult to overlook here. The Cadillac is competitive with these other sedans, but not a stand out.

In coupes, the field is narrower and the 2015 ATS Coupe stands a little taller. Chief competitors are the BMW 4-Series, which has been the class benchmark for some time, and the Audi A5. Several others from these makes could also be considered rivals for the Cadillac as well. Compared to these, though, we think the ATS Coupe is a strong contender. Where the BMW is driver-centric and much sportier, it's also more expensive and less comfortable by comparison. The Audi has standard AWD and better infotainment, but is, again, not as much the highway cruiser as it is the winding road master. In comparison to both, the Cadillac ATS Coupe is more refined towards the everyday driver and less about the sports enthusiast. This is a largely unexploited market in the luxury coupe category and Cadillac seems to be hitting it well.

All told, we enjoyed the 2015 Cadillac ATS and believe it's a solid entry in both the luxury sedan and coupe classes. The sedan, which exists in a class filled with excellent entries, has a tougher go of it in terms of competition. The coupe, however, stands largely alone in its class because of its differing focus. In both models, we feel that the Cadillac ATS has a lot to offer consumers.