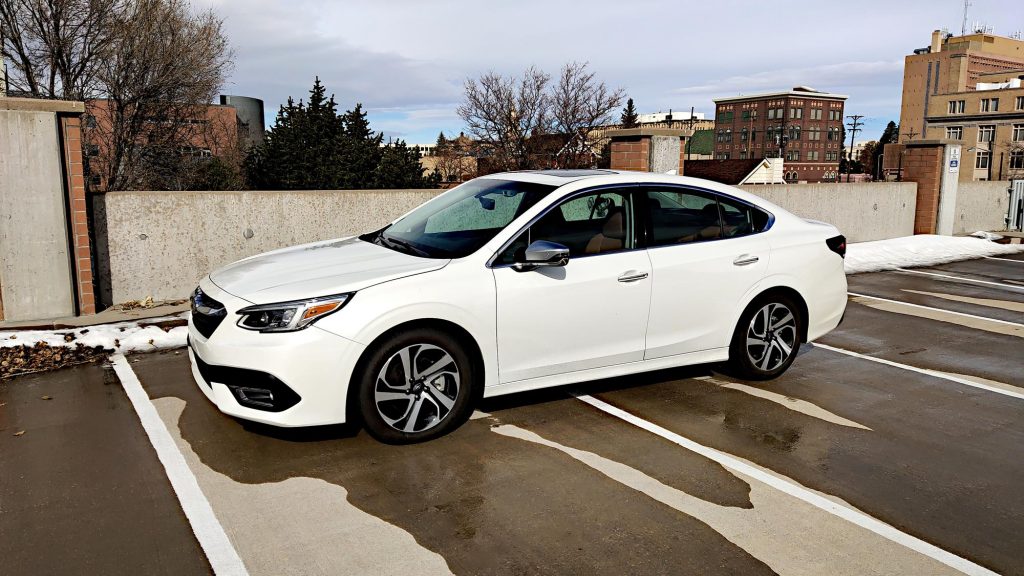 As the premier vehicle in Subaru's lineup, the Legacy often carries forward the latest and greatest that the company wants to display. The 2020 Legacy was completely redone for the new model year, sporting a new engine option, a huge infotainment interface option, and more along with the things that Subaru is most well known for.

The 2020 Subaru Legacy offers a premium experience as the most well-known sedan in Subaru's line. Like most Subaru vehicles, it has all-wheel drive, spacious seating, and active safety and driver assist features as standard features.

The Legacy competes in the midsize sedan market, which is both highly competitive and experiencing dwindling sales figures. Subaru's goal with the new seventh-generation design for this sedan was to gain market share among the heavy-hitters already doing well. The Legacy starts from a strong position, though, and has added a lot of good reasons to consider switching brand loyalties from the best-seller crowd.

The 2020 Subaru Legacy is a four-door, midsized sedan offered in six trim levels. There are two engine options with all-wheel drive as standard on all Legacy models. 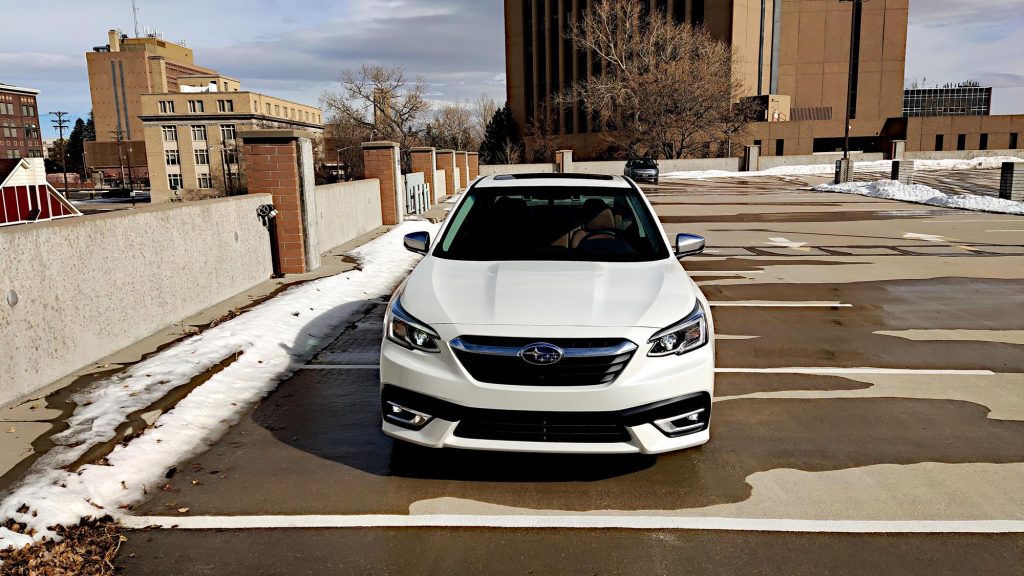 The 2020 Legacy has a new body design that is a mixture of upscale and contemporary that, while having a few high points, tends to blend into the crowd. A few touches, such as the rear pillar swoosh, the faster-paced hoodline, and the coupe-style roof silhouette are beautiful touches. But the underdone statement the bodywork, grille, headlamps, and overall shape of the Legacy make are just not all that standout in today's sedan market.

To be quite frank about it, while the Legacy does look very good, its selling points are not contained in its exterior styling. These are almost afterthoughts and compared to the best sellers in the field and that's something that won't attract many onlookers. In our opinion, Subaru should have been more aggressive about exterior changes if the goal was to win over more sedan buyers.

The interior of the 2020 Subaru Legacy is a beautiful example of what levels a midsize car can get to. Premium materials and good quality of build are the basis upon which the roomy Legacy's interior is built. The front seating is very comfortable with good adjustments and lots of leg and headroom.

The back seats are also well done with plenty of room in the outboard seats, whatever the passenger's size. The middle portion is more cramped and less comfortable, but not so much so that it's unusable when needed.

Trunk space in the 2020 Legacy is smaller than in some rivals, but not enough so that there are real grounds for complaint. It's low, flat, and easy to access as well.

Overall, Subaru managed to avoid becoming overly pretentious or over-complex in its design of the Legacy's interior. Instead, "classy" is the more appropriate word to describe its upscale refinement. 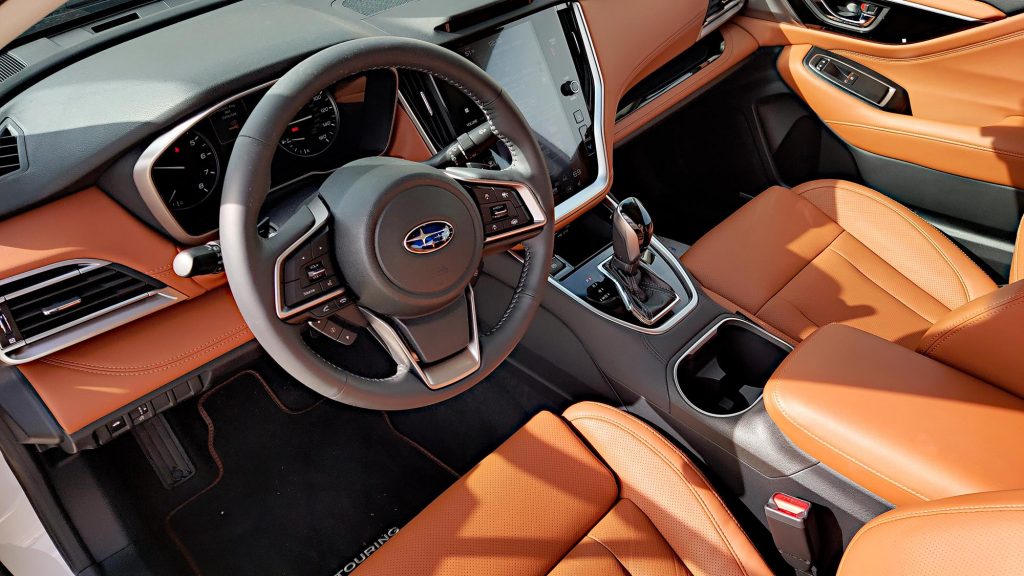 The standard touchscreen in the Subaru Legacy is a 7-inch unit with a four-speaker audio and two USB ports. Android Auto and Apple CarPlay are standard, as is Bluetooth and satellite radio connectivity. Most of the often-used audio and climate functions have hard buttons and controls with the smaller screen.

Upgrading, though, goes to a larger 11.6-inch screen with two more USB ports, navigation, and HD Radio through a 12-speaker Harmon Kardon system. Most of the audio and climate controls that were physically available become virtual, but are easy to find and use on the new, larger screen. It's a beautiful display that works very well.

We like the way the Subaru's screen is set up. The 2020 Legacy debuted the new, larger screen, which is now also in other Subaru models as well.

The 2020 Subaru Legacy has two engine options and thus two different EPA ratings for MPG returns. It's worth remembering, when comparing the Legacy's fuel economy with other vehicles, is that it's all-wheel drive whereas most of its competitors have AWD only as an option.

The 2020 Legacy has lower than average reliability expectations. Some of this comes from the model being entirely new for the year, but also builds on past expectations and a recall for problems with the braking system. J.D. Power and Associates rates the 2020 Legacy as among "The Rest" (2 out of 5 points).

The Legacy in its new 2020 rendition has received top marks in safety. The National Highway Traffic Safety Administration (NHTSA) rates it with five stars overall and five stars each for all crash test results.

Likewise, the Insurance Institute for Highway Safety (IIHS) gives top scores of "Good" to the 2020 Legacy for all crash test results. The Legacy has also received a score of "Good" for its headlamps and a Superior rating for its advanced safety systems (which are standard). That makes the Legacy one of the top-rated vehicles this year from the IIHS. 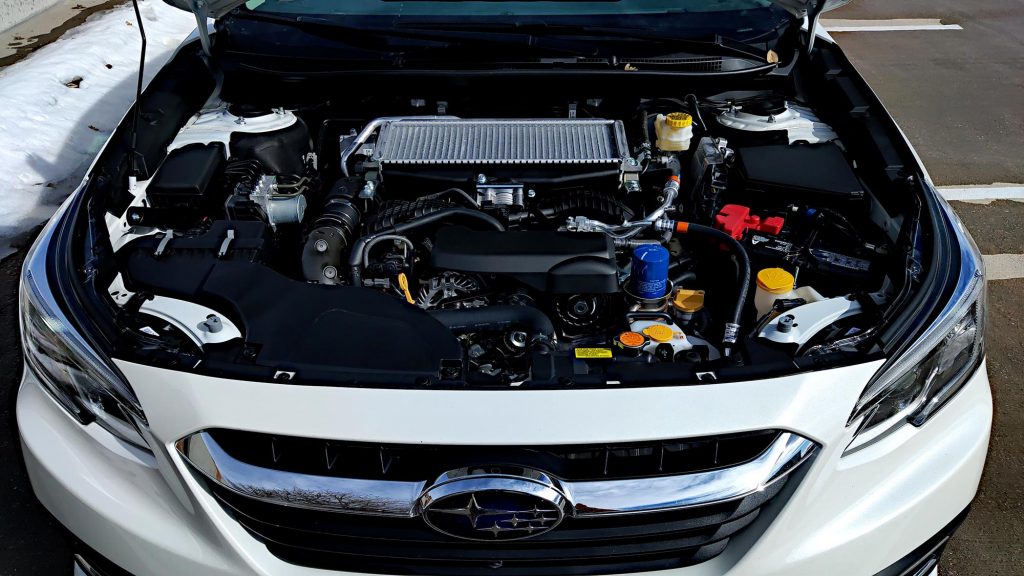 The 2020 Subaru Legacy is not a sports sedan, of course, but it has decent response for a midsize offering. It's standard all-wheel drive is also a boon, helping improve both handling characteristics as well as all-weather stability and control.

The base engine for the Legacy is a 2.5-liter four-cylinder that outputs 182 horsepower and 176 pound-feet of torque. This is a good option for the sedan, offering a good amount of power and economy for the class. It's eclipsed, however, with a beautiful turbocharged option that doesn't sacrifice much in the way of MPG for the extra power.

The upgrade engine option is a 2.4-liter turbo that outputs 260 hp and 277 lb-ft. Both engines use a continuously variable transmission (CVT) and, again, have AWD as standard. This upgraded engine produces power faster and holds it longer when compared to the base option. It's not sporty, but it's much more confident.

There's a lot to like about the new Legacy's design as well, which is firmer in feel and more predictable in corners. Visibility is very good as well, making the entire driving experience a good one in the 2020 Legacy.

The Legacy in this 2020 model year is well-priced compared to similar competing options. With standard all-wheel drive and Subaru's well-loved boxer-style opposed piston engines, it's a good bet. Resale values for Subaru models are generally far higher than industry averages as well.

The 2020 Legacy has several trim levels. We'd advise looking towards the Premium model for the best balance of price and equipment. Good options are available at this level to add on what you may want from there. Slow sales for the Legacy compared to other options on the market and other Subaru models on the lot mean that deals may be had as well. 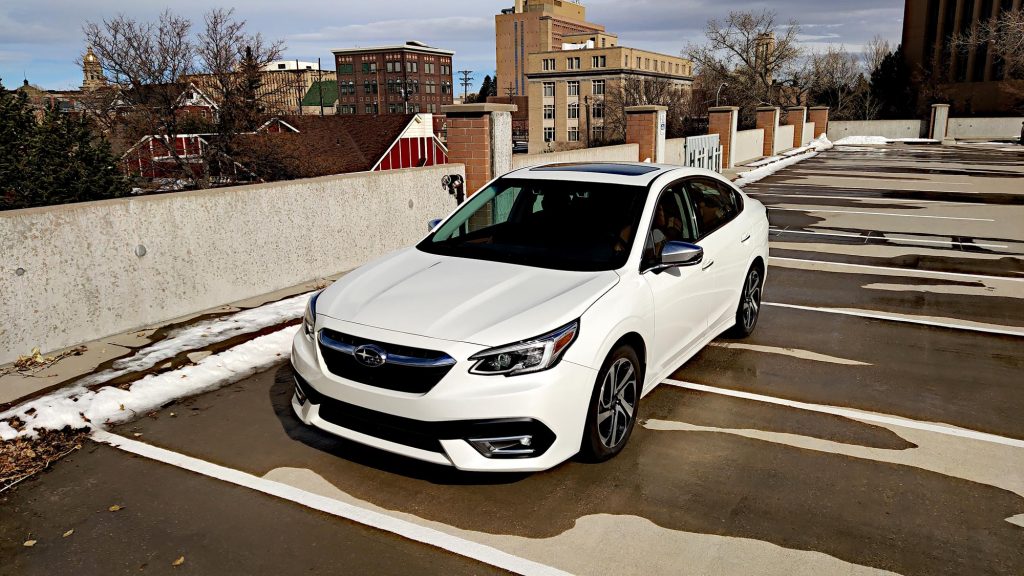 Chief competitors to the 2020 Subaru Legacy are the Honda Accord and the Toyota Camry. Also not to be overlooked is the Hyundai Sonata and the Nissan Altima. Compared to these, the Legacy fits somewhere in the middle as a "good at most things, not excellent at anything." The advantage for the Legacy, though, is its standard all-wheel drive. No other sedan in this class has AWD as standard. That could be a big deal.

Looking at it all, it's clear that the 2020 Subaru Legacy in this new generation is a very well-done sedan with a lot of high points. It's well worth putting on the shopping list to compare to others while making a decision.