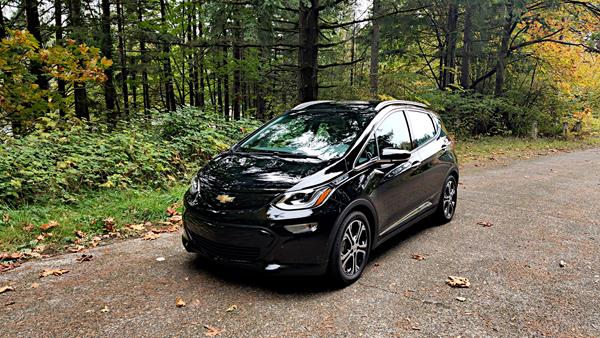 The Chevrolet Bolt debuted in 2017 as an all-electric, compact hatchback for the masses. For the 2020 model year, the Bolt EV gains 21 miles of expected range, more standard equipment, a restyling, and better safety cameras.

The Bolt is best known for its spacious interior and everyday car aplomb. The Chevrolet Bolt EV is quick, quiet, and versatile. Changes to the battery pack this year boost total range to 259 miles in all (estimated average). Chevrolet has added several apps to the infotainment screen in the Bolt EV that help manage the vehicle's energy usage and how it can be improved.

The Bolt is a five-seat hatchback available in two trim levels: LT and Premier. Both models have the same drivetrain, battery size, and are both front-wheel drive.


What We Love About the 2020 Chevrolet Bolt EV: 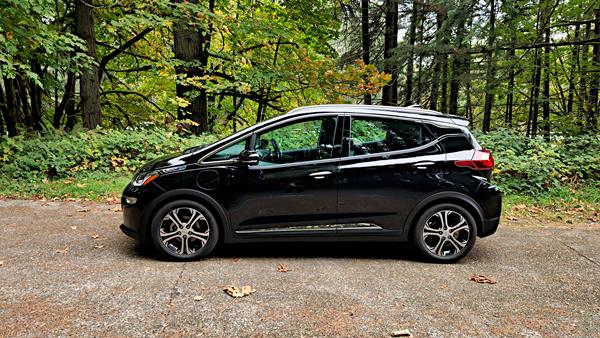 Chevrolet clearly tried to toe a line when it came to the Bolt's exterior design. They wanted the car to look different than others, in a futuristic way, but not so much that it looked odd or strange compared to other vehicles on the lot. The result is a fairly normal-appearing subcompact hatchback with five doors and a near-crossover-ish shape. But one that has a few elements announcing that it's a little different.

Designers at Chevy didn't use a loudspeaker to make those announcements, but they're present on the Bolt. The lack of a front grille, for example, and the futuristic detailed plastic plate used in place of it are a clear indication. The Bolt EV nameplates on the front fenders and rear hatch are tinted in blue to add extra attention. These and a couple of other tiny references denote the Chevrolet Bolt EV's status, but don't announce it so boldly that it deafens the onlooker to the rest of the normality of the vehicle. Much of the Bolt's overall design outside of those differences are taken from vehicles like the Chevy Trax and Spark, whose lines are seen in the hood, body, and roof of the Bolt EV.

Overall, we like this approach and think it should do well for Chevrolet. Too many of the Bolt's competitors are either too luxurious-appearing (hence announcing a large pricetag) or too futuristic-looking to appeal to many in the broad audience that considers compacts like this. Hitting the near-middle is a smart strategy and we think that the Bolt should take recognition for that.

So far as compacts go, the 2020 Bolt EV is pretty well-outfitted in its interior. This segment comprises a lot of entry-level econoboxes and interest-killing options and the Bolt manages to avoid all of those. Yes, it's essentially a slightly upfitted econobox hatchback, but the Bolt adds technology and good materials choices to the game.

Seating in the Bolt is good, especially up front. Large or small, the driver's seat will find a comfort zone for you and that's a good thing. We drove the Bolt EV on a fairly long, leisurely road trip through Washington and Oregon along the coastline and felt good the entire way. Even at over six feet in height, this reviewer managed to find a sweet spot in this tiny car.

The back seats are more cramped, of course, and follow the general rule of "underfed teenagers are the gauge of measure for accommodation." It's possible for taller and larger folks to fit in the back seat, but being comfortable while doing so is a bit of a stretch. Luckily, the Bolt EV offers a lot of cargo space for its size, with the area behind the back seats having a tub that drops down a few inches and enough room overall to stack three carryon bags without issues. The back seats fold down, of course.

We like the instrument design and gauge cluster in the Bolt EV. 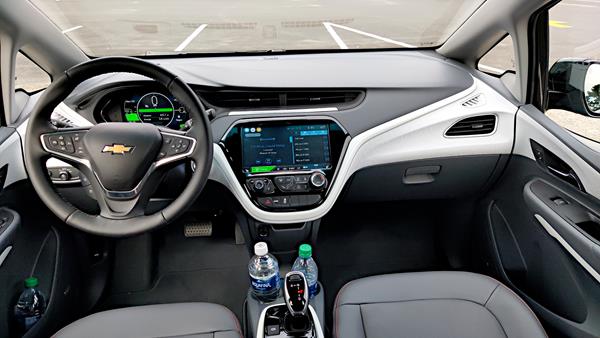 This newer rendition of the electric car adds even more interactivity with the infotainment for status checks and real-time range and power usage information. The MyChevrolet App adds connectivity for the car while it's parked as well, allowing the checking of charge status, location, pre-climate settings, and more from afar. Lost the car in a huge parking garage? You can beep the horn and flash the lights too. Great touches for what is essentially an urban runabout with enough range to go on short walkabouts as well.

The 2020 Chevrolet Bolt EV comes standard with a large infotainment screen (about 10 inches) that has Android Auto and Apple CarPlay as standard. A high-definition rearview camera is also standard. For those in colder climates, we'd recommend opting for the heated front seats and steering wheel to save energy over the longer term.

The upgraded Premier model of the Bolt EV has everything that's standard plus the heated seating/steering, heated rear seating, and Chevrolet's camera-based rearview mirror.

Sadly, most higher-end safety equipment is optional in the Bolt rather than standard. So is the DC fast charger, which gives access to quicker SAE Level 3 charging station usage.

The Bolt EV is a fully electric car. So excellent fuel economy is a given. The range for the 2020 Bolt increased by 21 miles to 259 miles (average) in all. We managed to drive from Seattle to Portland on coastal highways without stopping for a full charge and never sweated range during that drive.

Charging the Bolt EV takes about 10 hours from a 240-volt outlet and a DC fast charger will give the car about 100 miles of range in half an hour. The Bolt EV is EPA-rated at 127 MPGe in the city and 108 MPGe on the highway. 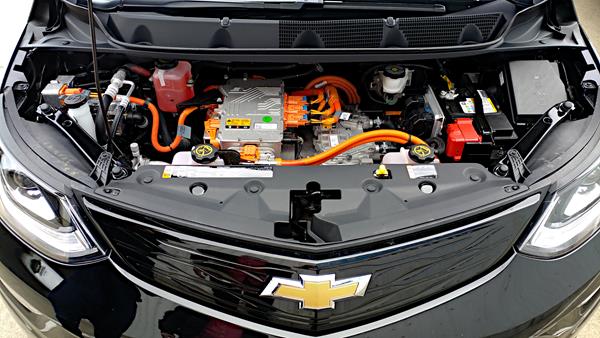 The 2020 Chevrolet Bolt EV is rated as "About Average" by the J.D. Power and Associates Vehicle Dependability Study. There has been one recall for the Bolt on a safety issue, but nothing regarding powertrain or chassis. The Bolt has a standard 3-year/36,000-mile warranty on all but the battery, which has an 8-year/100,000-mile warranty.

The 2020 Chevrolet Bolt EV has scored well on crash tests from both major North American testing bodies. The National Highway Traffic Safety Administration (NHTSA) has given the Bolt a five-star rating overall, with four stars for frontal crash test results and five stars each for side and rollover results.

The Insurance Institute for Highway Safety (IIHS) has also given the Bolt high ratings. Every crash test resulted in a top score of "Good" with the exception of the Small Overlap Front Passenger test, for which it received a second-best Acceptable rating. The Bolt also received an Acceptable rating for its headlights and a top Superior rating for its crash avoidance technologies (if equipped).

We are disappointed that neither of the Bolt's trim levels come standard with driver safety aids such as blind-spot monitoring, lane keeping assist, and forward collision warning with emergency braking. These are optional upgrades for the car.

The 2020 Bolt EV is powered by a 200 horsepower electric motor that produces 266 pound-feet of torque going to a single-speed transmission and the front wheels. The Bolt has a 66 kWh battery pack that offers an estimated 259 miles of average range per charge. Charging times depend on power connections, but most will get from empty to a full charge in about 5-6 hours from a standard charging station. A DC fast charger will charge in less time and a standard household outlet in far more time.

The difficult part of the 2020 Chevrolet Bolt EV is in its pricing. The base price for the Bolt is in the luxury car realm, but other than its battery-electric powertrain, there is no justification for that. Most buyers are closer to the $40,000 mark for this car and there are no more federal incentives for the purchase, so the price is what it is.

The value in the Bolt comes from its expected returns in other ways. Electricity for charging is cheap or free, especially when compared to an equivalent gasoline car. Chances are that those savings won't equal the added dollars spent upfront, but many states still have EV incentives in place that could allay that. 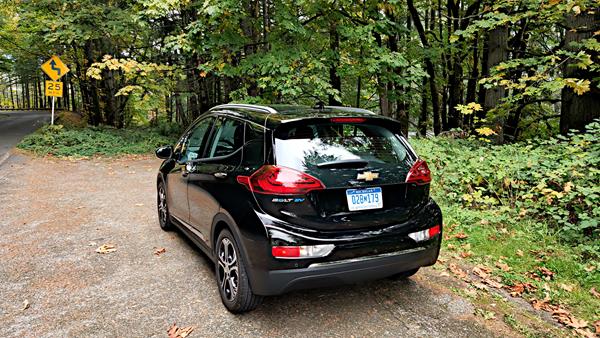 There are now a lot of strong contenders in the electric vehicle market. Especially in the compact market the 2020 Bolt EV is competing in. The Tesla Model 3 dominates in sales, but is larger and less generally versatile than is the Bolt. The Hyundai Kona and Kia Niro EV offer similar size and interior space and are range-competitive with the Bolt EV. Either are a competitive choice, though the Bolt differs in its technology presentation and styling appeal.

As it is, the 2020 Chevrolet Bolt EV is a great option for those seeking an electric vehicle alternative. It's price-competitive with other EVs, but not with equivalent gasoline-powered options on the market. Nevertheless, it does fit an ever-growing demographic of buyers and we think it's a solid fit there.