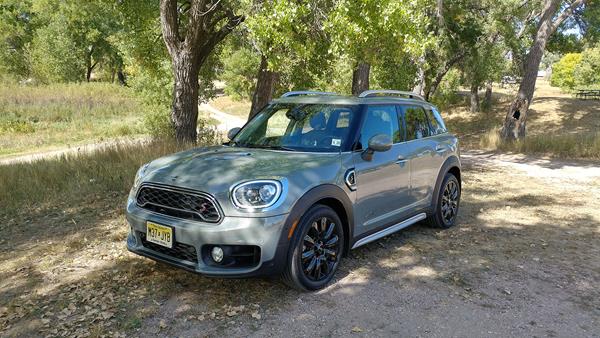 The 2019 MINI Countryman is the crossover version of the popular MINI Cooper franchise. With underpinnings based on the BMW X1 crossover, the Countryman offers four doors, a hatchback, and a lot more roominess than is standard in a MINI. Styling remains in line with the Cooper garage.

The 2019 Countryman shines not only for its true crossover underpinnings (and the versatility that brings), but also for its upscale interior and well-done homage to the MINI heritage. There are some downsides to the largest of the MINIs, but they're not likely deal breakers for buyers in this segment who're looking for something more than the norm.

Most of the changes for the 2019 BMW MINI Cooper Countryman this year are centered on equipment availability and trim level changes. Standard and optional equipment changes somewhat from the Countryman's new-generation introduction in 2017. This MINI otherwise remains the same as its generational counterparts.

The 2019 MINI Countryman is offered in four model options, differentiated by powertrains, and three trim levels. Every Countryman model offers seating for five and most are offered in either front-wheel or all-wheel drive ("All4").


What We Love About the 2019 MINI Cooper Countryman:


What We Don't Love About the 2019 MINI Cooper Countryman: 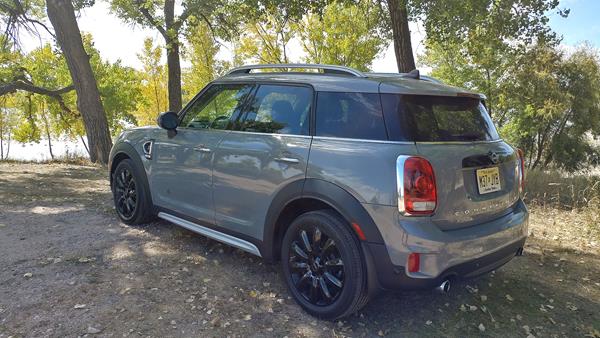 The 2019 MINI Cooper Countryman is a bit polarizing, given its MINI heritage, but it does have all of the unique looks of the MINI line and is unlike any other crossover in the compact class. The Countryman is marked apart from other Cooper models for its less rounded headlamps, larger body size, higher ground clearance, and more squared-off rear hatch. A true hatchback, the 2019 Countryman also has heavier fender covers for a more robust look and a larger rear door than any MINI four-door offered.

The Countryman is, like it or not, a good-looking entry into the compact class for its uniqueness. The rounded MINI hood, flat and smiling MINI face, and larger lower intake with wider fog lamp bezels are all marks of the MINI Cooper backdrop. The general body shape, though larger and longer than most MINI models, is still very much in line with the heritage of the brand. Simple, but not boring door panels, humps where the lighting protrudes, and a flat roof with rails along with rounded side mirrors are all marks of the MINI brand.

The surprising lack of bulkiness for the MINI Cooper Countryman often means that the interior's size and roominess is unexpected as well.

The 2019 BMW MINI Cooper Countryman has the largest interior of the MINI lineup and thus far more roominess than a MINI would otherwise offer. Even with its small size on the outside, the Countryman has a larger interior than most would expect. There are a few down points, but overall the Countryman is the best-outfitted MINI, out of the box, when it comes to interior accouterments and comfort.

The driver is treated to a very adjustable seat, courtesy of BMW design. The very MINI toggle switches are a nifty touch and are, for the most part, well-labeled and defined in function. The engine start switch sits at the center of the center console's lower toggles with other related controls (drive mode and the like) located nearby. The tilt-telescoping steering wheel carries the instrument cluster on the steering column, so adjustments are entirely for comfort and fit, not for visibility. A nice touch for those of us a little taller than the norm.

The front passenger is treated to an equally well-done seat with plenty of legroom, headroom, and shoulder room. The dashboard is all MINI with lots of rounded edges, round elements, and aircraft-inspired doodads. It's lifted up and away, giving extra knee room not often found in compact vehicles. 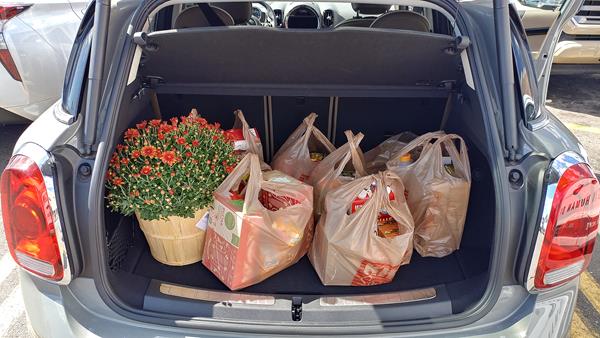 The rear seat is larger than will be found in some contemporaries for the MINI Countryman. Three can sit across when required, but it's largely a two-seater with a middle area for extra room. The center seat has a noticeable hump and legroom is limited there. The outboard positions are good, though taller folks will still feel cramped--as they would in any compact. Parents will be happy to note that child safety seats fit well in the little MINI Countryman with LATCH anchors at the outboard positions being readily accessible.

Cargo space in the 2019 MINI Countryman is unusually shaped for the crossover class. The loading floor is very low with the seatbacks being relatively high, meaning that while the space is not as large as in some rivals at 17.6 cubic feet, it accommodates larger items better without impinging on rear visibility for the driver. When the rear seats are folded (40/20/40 split-fold), cargo space expands to 47.6 cubic feet, though we note that the rear seats do not fold completely flat. Those looking at the plug-in hybrid S E model should note that the charging cable is stored in the rear cargo space as well, taking up a little space.

The new 2019 BMW MINI Cooper Countryman has a good-sized infotainment interface screen with good graphics quality and readout. Sadly, it's inhibited by the control knob user interface that works well, though it's often tedious. That controller trumps the touchscreen in most cases, however, which is often near useless due to the weird use of large icons which only respond at their most central point and menu screens that seem made especially for control knob interaction rather than fingers.

Most of the expected items are present in the MINI Countryman's setup, including two USB ports up front (none in the back) and most general use items like satellite radio and the like. Smartphone interaction is limited in the Countryman's models until the Signature is chosen, which then adds Apple CarPlay. Android Auto is not available, but there are some apps that don't require a smartphone, like Spotify, that are available with the model upgrade. We do like the MINI's extremely well-done voice controls and would recommend experimenting with those for most daily-use items as a way around the clunky interface. 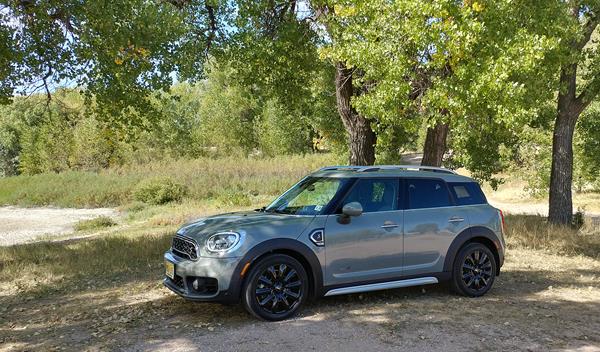 As of this writing, there are no available reliability ratings for the 2019 MINI Cooper Countryman. There have been no safety recalls and the MINI is covered by a four-year/50,000-mile warranty.

The 2019 BMW MINI Cooper Countryman has not yet received crash test ratings from the National Highway Traffic Safety Administration (NHTSA) and there are no current-generation Countryman ratings to use to fill in that blank. The Countryman does have ratings for the nearly identical 2018 model year from the Insurance Institute for Highway Safety (IIHS).

The IIHS gave the 2018 Countryman a full suite of top scores ("Good" rating) for its frontal, side, and roof crash results. It also gave the Countryman a "Good" score for head restraints.

The 2019 MINI Countryman is powered by any of three drivetrains. The Classic model, which is offered in front-wheel drive by default and with all-wheel drive (called "All4") as an option, has a 1.5-liter turbocharged four-cylinder engine that outputs 134 horsepower and 162 pound-feet of torque. This engine comes standard with a six-speed manual transmission with an option to upgrade to a six-speed automatic (for FWD models) or an eight-speed automatic (All4). This engine is generally considered sluggish and underpowered for the MINI's smaller models and is definitely not large enough for the heavier Countryman model.

The upgrade engine, which comes in the Cooper S, Signature, and Iconic models, is a 2.0-liter turbocharged four-cylinder that outputs a more amenable 189 horsepower and 207 lb-ft. The eight-speed automatic transmission is standard in the FWD model of the S while a six-speed manual is standard with the All4 models and the eight-speed automatic is optional. This engine is right-sized for the MINI Cooper Countryman and does well with it, though it's not as spry as some MINI aficionados might wish.

The Cooper S E Countryman model is a plug-in hybrid option. This pairs the 1.5L turbo engine with a six-speed automatic transmission to power the front wheels. The rear wheels are powered by an electric motor and a 7.6 kWh battery pack. The combined output is 221 hp and 284 lb-ft, though the gains in HP are largely negated by the heavier weight of the plug-in components. The torque, however, delivers quickly and makes the S E feel like the sportiest of the MINI Countryman lineup.

On the road, the Countryman shows its bulk when compared to the smaller Cooper models with their shorter wheelbases and faster pace. As the more family-oriented of the MINI line, though, the Countryman does have its advantages and offers a smoother ride than most of its stablemates.

The 2019 MINI Countryman is expensive compared to most main market rivals, but relatively inexpensive when compared with luxury crossover options. With a price tag approaching $30,000 at near base-level for most buyers, the Countryman is not a low-cost or entry-level compact crossover by anyone's measure.

Resale for the MINI is also only marginal compared to the segment. Its saving grace is in its large array of package options and trim points. We'd recommend steering away from the base model and springing for the S or the S E models with their better powertrains and daily drive appeal. For those who can afford it, the plug-in S E model offers a lot of well-rounded excellence as a get-around option. 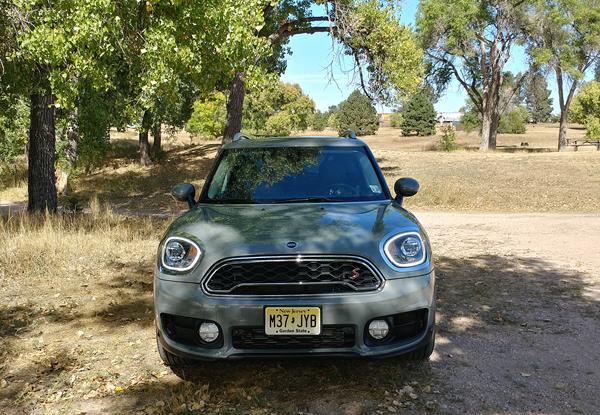 The 2019 BMW MINI Cooper Countryman can be compared to some of its stablemates in the MINI lineup, especially the Clubman, which is a bit smaller and even more unique in appearance, but which sells for a slightly better price point and with more umph under the hood thanks to its smaller size. The BMW X1 is also comparable as a luxury counterpart. It's more expensive than the MINI Countryman, but has more luxury and a larger cargo area. Other options include the very well-done Mazda CX-3, the more rugged Subaru Crosstrek, and the surprisingly luxurious little Buick Envision.

Compared to these rivals, though, the 2019 MINI Cooper Countryman is unique and useful as a compact crossover offering. It's premium interior, immediately recognizable design, and generally fun nature are hard to ignore. It may not be a MINI lover's MINI, per se, but it's close enough that those needing to upsize will enjoy its company.