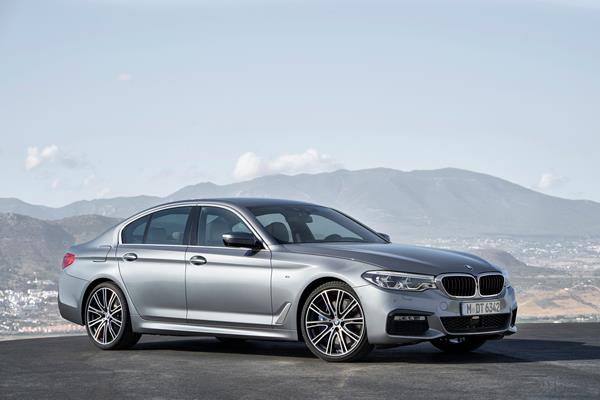 The 2017 BMW 5 Series is all new for this model year and it's also one of the highest-rated cars we've reviewed. The 5 Series carries the BMW flag forward as the best-selling sedan in the make's lineup, and this year's updates mean a lot to the car's excellence going forward.

The 5 Series is most well known for its excellent drive dynamics and everyday usability combined with smart performance. That doesn't change for the 2017 model, which now sits on an entirely new platform. The new 5 is 1.2 inches longer and just over half an inch taller, but you wouldn't know it by just looking at the car. Its exterior has been adjusted to give it a lower, sleeker look instead.

Technology is also paramount in this new 5 Series and has evolved to the point that this may be the most advanced car on the road in combined terms of safety, techno-gadgetry and cool "never thought this would be that useful" gear. Unlike other technology-filled cars today, the BMW 5 didn't gain a lot of weight or become unusable for its mega-screen opulence. Instead BMW melded the new tech neatly into the car, building on what it learned with its flagship 7 Series last year.

In all, BMW has managed to create a very well-done luxury sedan in the new 5 Series and its high score reflects how impressed we are with the engineering. 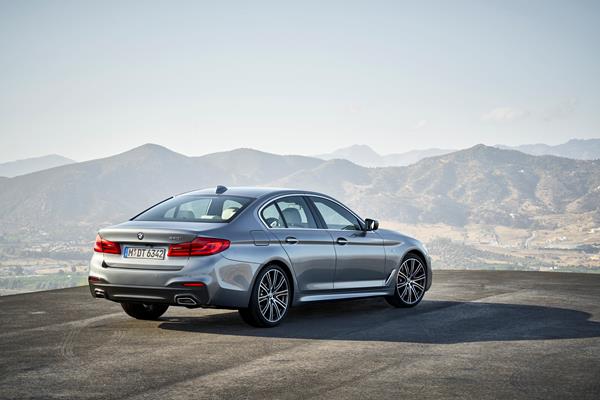 The 2017 BMW 5 Series is new, but from the exterior, anyone familiar with the 5 will recognize this new car as being one of that series. The 5 Series is most visually well-known for its kidney grille, sloop-style hood and fast-paced, straight body design. The 2017 5 Series keeps that motif going, adding a few tweaks for a more contemporary BMW.

The headlamps are a little narrower and more edged, flowing off of the kidney grille at either side and into the fender. Below the grille, a less pronounced scoop is flanked by large fog lamp bezels that create an oppositional effect to the narrow lights and wider grille above.

Along the sides, the straight body lines are heavier and more accented than they were before, de-emphasizing the greenhouse above and giving the BMW 5 Series a more low-topped pace. The fast pace is continued through the clipped rear for a fastback look.

The overall impression from the new 5 Series is of forward motion in a saloon's speedy style. It's definitely a Bimmer look that has done well on other models in the BMW line, including the 7 Series and the smaller sedans below the 5. 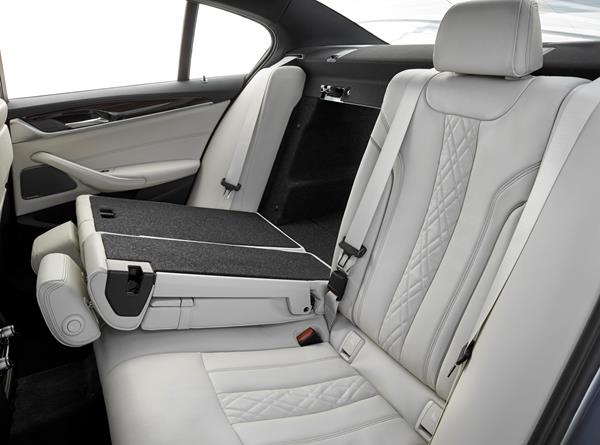 The interior of the 2017 5 Series is a continued evolution of the car's previous generation, matching the exterior's changes. Most noticeable to those moving from the 2016 to the 2017 model are the changes in the dashboard's shape and the larger space in the back seats.

The dashboard is a bit lower and wider than in the previous generation of the car. It retains the same overall design shape, albeit with a slightly thicker center stack to accommodate much more technology than was to be had before. Some details are also different in control features, with additional buttons for upper-grade driver aids being added.

Driving controls and steering-mounted controls are much the same, with easy-reach access and an intuitive layout meant to keep the driver concentrated on driving. Instruments are easy to read and adjustments are plentiful.

Seating in the 2017 5 Series is also very good, with upgraded multi-contour seating available in the front, to include massage units and dynamic bolstering for spirited driving. We like the new center console with its slightly wider build and individual openings.

Back-seat passengers will enjoy an extra inch of legroom and plenty of headroom, making this one of the roomier midsize luxury sedans on the market. Seating is very good but three across is a stretch, even for kids. Especially with the aggressive European-style seating, which sometimes impedes child safety and booster seat use.

Cargo space is very good in the 2017 BMW 5 Series. It boosts from 18.4 to 18.7 cubic feet, which is better than most, and the rear seats are split-fold to allow more cargo. Ski pass throughs and other accommodations are also found in this BMW. 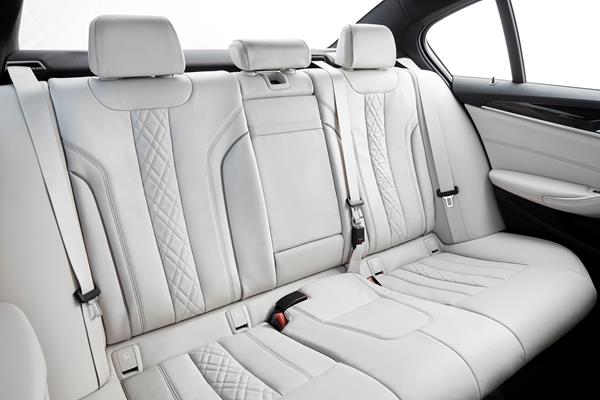 The BMW 5 Series is one of the most popular of the BMW models on the roads and often receives new technology sooner than other models. Although most of the whiz bangs newly added this year were first introduced in the flagship 7 Series last year, they are some of the best on the market.

The central infotainment screen is similar to what it has been in the past couple of years, with crisp graphics output and a fast response to user inputs. Added are an upgrade to the iDrive controller knob on the center console, just ahead and to the right of the driver's shifting hand. The intuitive top-mounted touchpad is still there, but the controller is now sensitive to driver versus passenger input, unlocking systems for the passenger that are otherwise locked for the driver while the car is in motion.

That unlock comes thanks to the addition of gesture controls, first introduced in the 7 Series. These are largely a gimmick, but some users find them very intuitive. Especially for everyday uses like accepting or rejecting phone calls through the Bluetooth system and for changing stations on the radio.

Also added are some cool driver's aids that aren't in competing vehicles. These include the remote parking option, an assisted parking function that allows the car to be controlled from outside. This lets the user park the car through a smartphone (using BMW's app) to control the car remotely. At any time, this app also allows the user to access the car's 360-degree camera view to see what's going on around the car.

Standard technology options such as Bluetooth connectivity, remote start, advanced audio and so forth are also included in the 2017 BMW 5 Series. 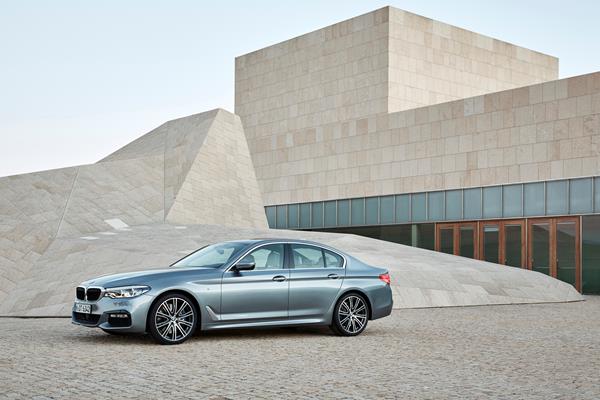 Fuel economy in the BMW 5 Series is good for the luxury segment, but not class leading. The 530i model with its 4-cylinder engine is EPA-rated at 27 mpg combined, with 24 mpg in the city and 34 mpg on the highway in rear-wheel drive. All-wheel drive drops these numbers by about a point.

The 540i model uses a 6-cylinder engine that is rated at a combined 23 mpg, with 20 mpg in the city and 29 mpg on the highway in all-wheel drive. The rear-drive version is rated at 24 mpg combined.

The 2017 BMW 5 Series has received a J.D. Power and Associates Vehicle Dependability Study rating of "Better Than Most." This gives us reason to believe that the car will be very reliable compared to contemporaries and previous generations of the car.

There have been no recalls for the 2017 5 Series as of this writing.

Safety scores for the 2017 BMW 5 Series are top notch across the board. The National Highway Traffic Safety Administration (NHTSA) rates the 5 Series with a 5-Star overall rating, giving it four stars for frontal impacts and five stars each for side crash and rollover tests.

The Insurance Institute for Highway Safety (IIHS) has given the 2017 BMW 5 Series a Top Safety Pick Plus rating, with all crash scores a best-possible "Good" and for advanced safety measures.

A wealth of standard safety features and a bevy of optional advanced upgrades make the 5 Series one of the safest cars tested this year. 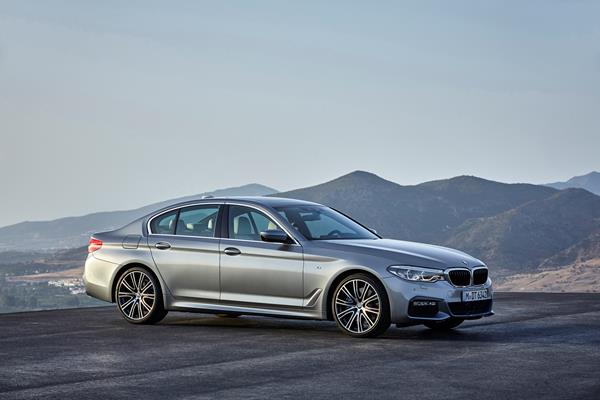 The 2017 BMW 5 Series has two engine options, each coming with its own model number. The 530i is powered by a 2.0-liter 4-cylinder engine turbocharged to produce 248 horsepower and 258 pound-feet of torque. Our week with this option in AWD showed that not only are its fuel economy estimates about right, but the car is very dynamic with this little twin-turbo engine.

The 540i uses a 335 horsepower inline-six with turbocharging that boasts 332 foot pounds of torque. This more powerful variant is for the power-hungry in the luxury sedan segment and should appease those people well.

Both engines are mated to an 8-speed automatic transmission and there are no other options available. Manual gearbox aficionados will be disappointed, but the 5 Series has not traditionally sold well with a clutch included.

Steering and handling in the 2017 5 Series is typically precise, as expected of a BMW. The German make is known for its road friendliness and the 5 Series definitely keeps that at the fore with its excellent dynamics. On the highway or a twisty back road, the 2017 BMW 5 Series will not disappoint and is very engaging to drive.

Yet comfort is also paramount in this luxury segment and the 5 Series has that in spades. Quiet and unobtrusive when leisurely driving is at hand, the car can transform when pressed into action.

A weaker point for the 2017 BMW 5 Series is in its pricing structure relative to the market and its stiff competition from other German makes. Both of these points have meant flagging sales, which could work in the buyer's favor when negotiating at the dealership.

The base price for the 5 Series is significantly higher than that of competitors and doesn't include some equipment that may be consider standard, such as safety and parking cameras.

In addition, the resale values for the 5 Series have not traditionally been high. This new generation could change that, but we doubt it. This further impedes the value proposition for the car. A few markets for luxury makes, such as California and New Jersey, have often shown much higher resale values than have those where luxury cars are not as prevalent. 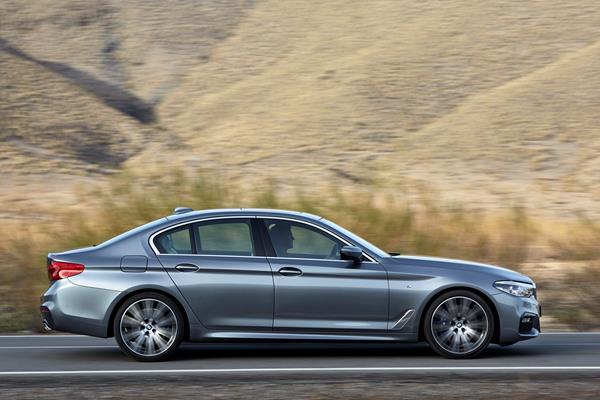 The BMW 5 Series competes in a strong segment of luxury sedans that makes shopping around a good practice. The Mercedes-Benz E-Class is new this year as well and so far has been dominating the segment's sales for good reason. In all ways but technology, the E is comparable or better than the BMW, especially in price point. The Lexus ES is also worth considering as an option, if luxury is more your aim and price is very important.

Knowing all of this, the 2017 BMW 5 Series is still an excellent contender in the luxury market. We greatly enjoy its mix of luxury, style, performance and class. This may be the best 5 Series yet and it contains some of the most advanced tech you'll find in any vehicle, bar none.