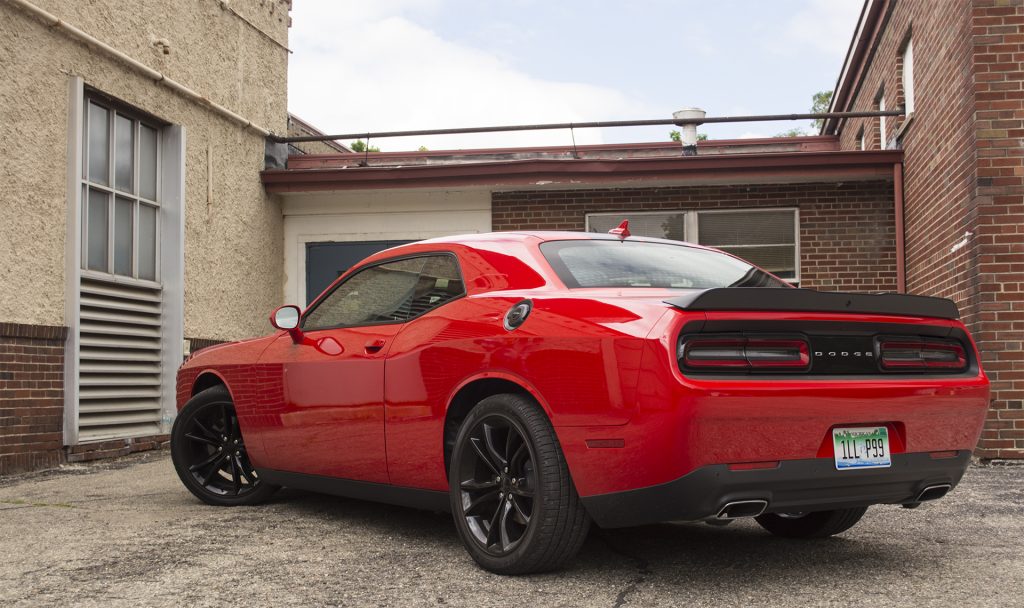 The late sixties and early seventies were a golden age for U.S. automakers and those who loved performance. American Motors, Chrysler, Ford, and General Motors were producing muscle cars at a fast rate to one-up another and fulfill a growing demand from buyers. From small pony cars to large luxury coupes, there was a muscle car to fit your needs. But the advent of emission standards and gas crisis in the mid-seventies caused sales of muscle cars to drop and automakers to scrap future plans. It seemed this era would never return.

But the mid-2000's saw a resurrection of muscle cars with Chevrolet bringing back the Camaro, Dodge reintroducing the Challenger, and Ford adding a bit of retro styling to the Mustang. It wouldn't be too long before the arms race would crank back up with the three brands introducing faster and powerful versions of their muscle cars. But they made sure the base models equipped with V6 engines offered excellent performance while meeting stricter emission regulations. Last year, Dodge introduced a new V6 and eight-speed automatic for the Challenger that promised improved performance and fuel economy. Let's see if it does.


What We Love About the 2016 Dodge Challenger


What We Didn't Love About the 2016 Dodge Challenger 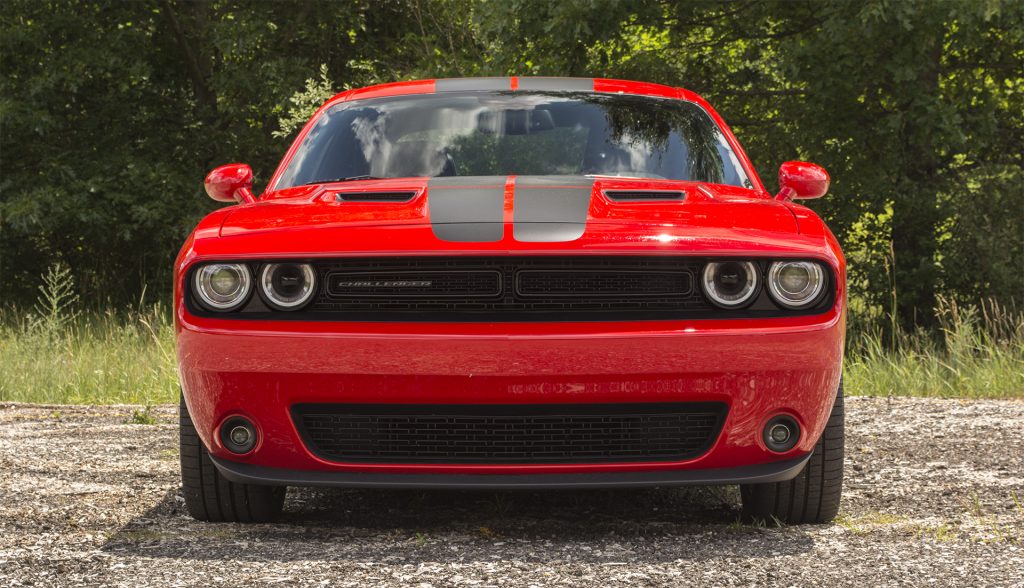 Trying to mix retro and modern cues into a coherent design is a tricky task as the end result can look like a success or a hot mess. Thankfully the Challenger's design falls into the former. Park the 2016 Challenger next to an early 70's model and there is a clear resemblance between them. Such cues as the narrow grille, quad headlights, fuel filler cap, and a large, rectangular taillight are present on both. Our Challenger tester featured an optional Blacktop appearance package that added black stripes, blacked-out grille, and a set of 20-inch wheels. This package adds a nice touch of aggression to an already mean looking coupe.

The downside to the Challenger's design is poor visibility. Large rear pillars and a narrow area for glass make it difficult to make a safe pass or backup. The good news is that the Challenger does offer a backup camera as an option on the SXT and R/T, and standard on the rest of the Challenger lineup. We recommend optioning the blind spot monitoring and rear-cross traffic alert as it will make passing and backup a bit easier. 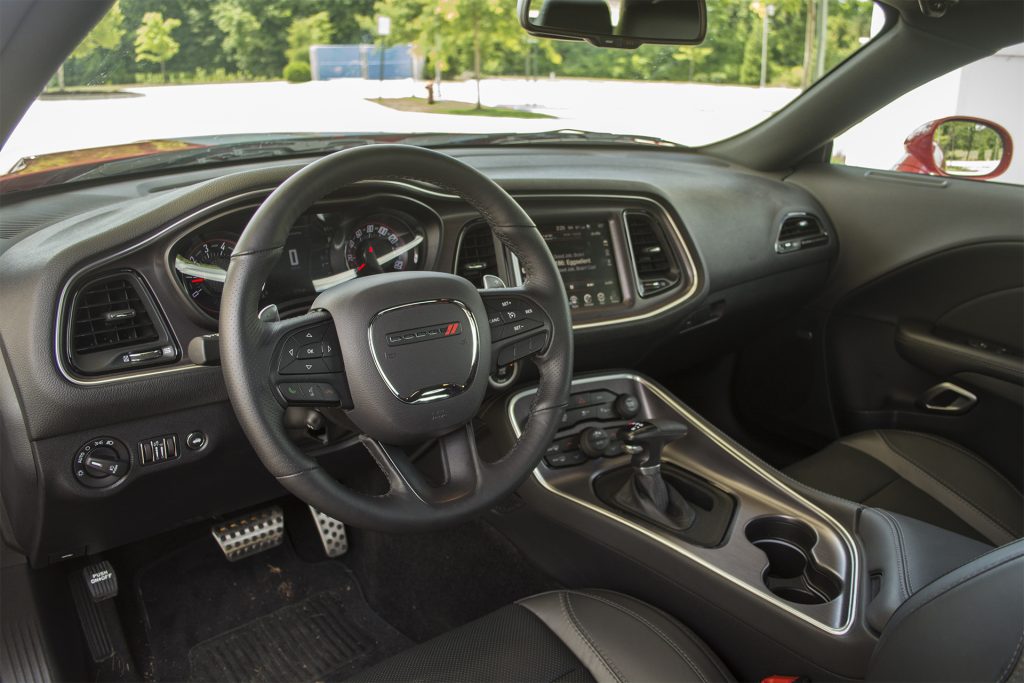 One area Dodge fell a bit short with the Challenger was the interior. A lackluster design, questionable materials, and some odd decisions spoiled an interior that offered more space than its rivals. Last year, Dodge addressed this head on with a new interior. The design is driver-focused with the center stack angled towards the driver and a configurable screen in the instrument cluster to provide key data. Material quality has seen a noticeable improvement with more soft-touch plastics and metallic trim pieces used throughout. Dodge also replaced the tractor-sized steering wheel for one with a small diameter. This change makes the Challenger a bit more fun to hustle around corners.

Coupes, in general, are not known for being spacious, but the Challenger is the exception. The front bucket seats provide excellent levels of comfort and support. Power adjustments on our tester made finding a comfortable position very easy. The back seat is somewhat hard to get in due to a narrow opening when you slide the front seat. But once back there, there is a surprising amount of head and legroom for an average-sized adult. Trunk space is also large with 16.2 cubic feet.

The Challenger SXT, R/T, and R/T Shaker feature a five-inch touchscreen, while a larger eight-inch screen is standard on the rest of the lineup. No matter the screen size, it will feature FCA's UConnect infotainment system. This system is one of the easiest to wrap your head around thanks to an intuitive interface, large buttons on the screen, and quick response times. It doesn't hurt there are a set of redundant controls for the infotainment system and climate control. One item we hope FCA adds in the future is compatibility with Apple CarPlay and Android Auto. 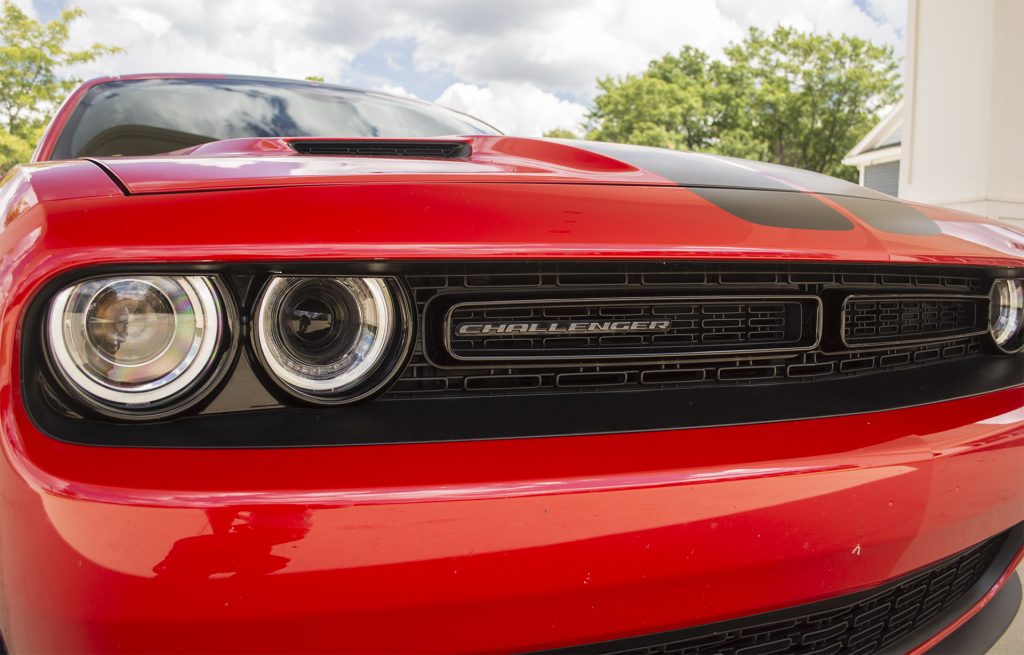 The EPA rates the Dodge Challenger with the V6 and eight-speed automatic at 19 City/30 Highway/23 Combined. Our week saw an average of 23.4 MPG.

If there is one area that vehicles from Fiat Chrysler Automobiles falter, it would have to reliability. The Challenger is no exception to this. Both Consumer Reports and J.D. Power rate the model with below-average reliability. This is due to issues with the automatic transmission and engines. 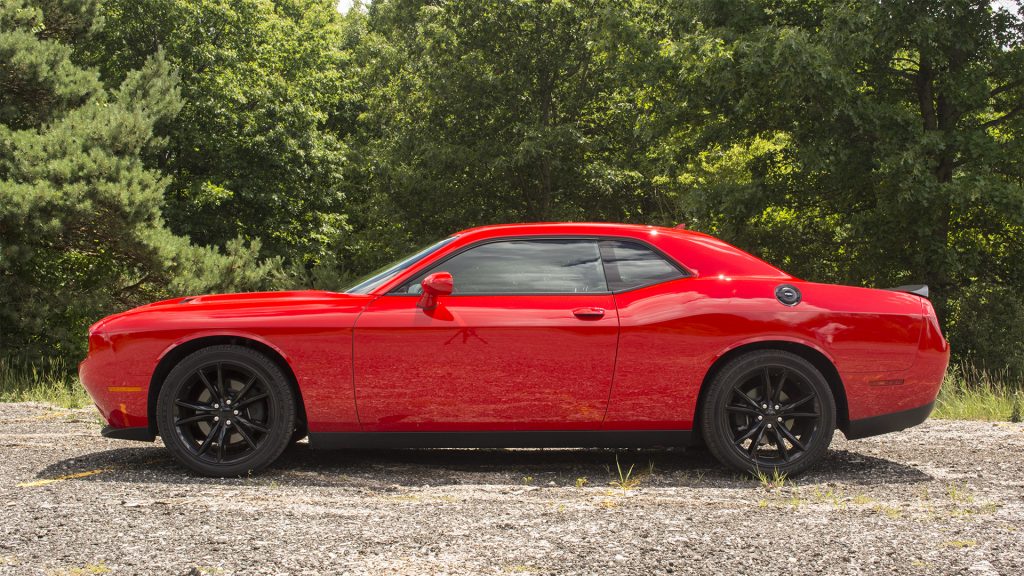 The Challenger is a mixed bag when it comes to safety. The National Highway Traffic Safety Administration awarded the model a five-star overall rating. The Insurance Institute for Highway Safety gave the Challenger the rating of Good in the moderate overlap front crash and side impact tests; Acceptable in the rear crash and roof-strength test; and Marginal in the recently introduced small overlap front crash test.

All Challengers feature full-length side curtain airbags, front side airbags, knee airbag for the driver, traction and stability control; anti-lock brakes, and tire pressure monitoring. A backup camera and park assist system are standard on the SXT Plus, R/T Plus, SRT 392 and Hellcat models. Optional are a blind-spot monitor, rear cross-traffic alert, and forward collision warning. 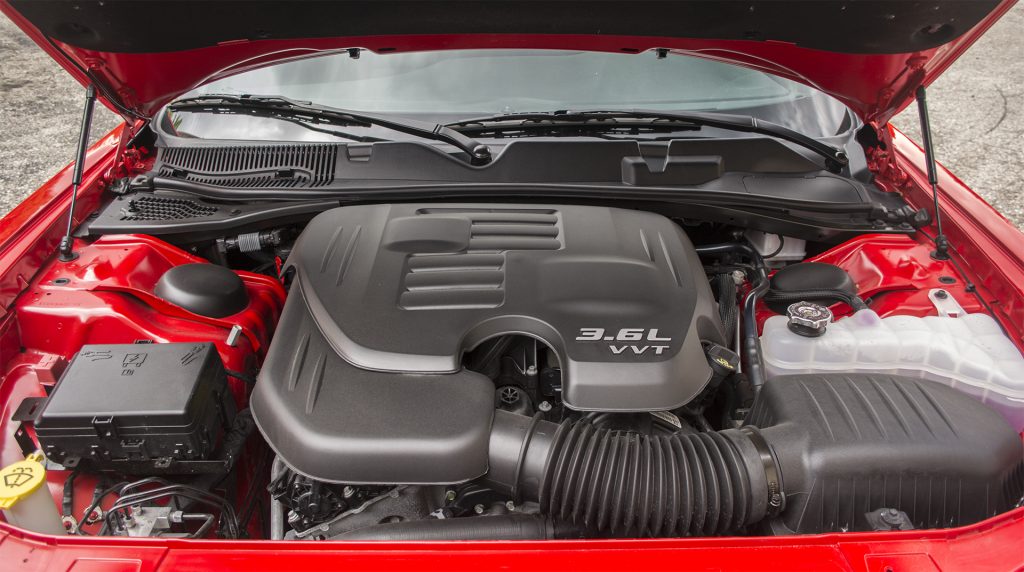 If you believe a V6 in a muscle car is best reserved for those sitting in the rental car lot, then the Challenger will change your mind. The 3.6L V6 moves the Challenger as surprising rate. No matter where you are the rev range, step on the accelerator and the engine delivers that punch of power. What might disappoint some is the V6's engine note. It doesn't sound like it belongs in a muscle car and will likely make you wish that you went for the V8. The eight-speed automatic snaps off gear changes very fast.

A key trait that Dodge hasn't messed with the Challenger is the ride. Unlike most coupes, the Challenger's suspension is tuned for comfort. Drive it over some rough roads and the Challenger makes it feel like you're driving a sheet of glass. Along with low levels of wind and road noise, the Challenger becomes an excellent road-trip vehicle. But this comfort does mean the Challenger does roll a bit in the corners. This can be fixed by optioning the Super Track Pak which adds a revised suspension, retuned steering, performance brakes, new tires, and a three-model stability control system. Our tester featured this package and it shows a noticeable improvement with better body control and improved grip. But the package cannot solve the Challenger's biggest problem; weight. Around curves, you notice how heavy this vehicle is. Compared to the Chevrolet Camaro and Ford Mustang, the Challenger doesn't have the same levels of agility.

The 2016 Dodge Challenger starts at $26,995 for the SXT and climbs to $67,190 for the SRT Hellcat when equipped with the automatic. Our Challenger SXT Plus tester starts at $29,995 and with a few option packages, our as-tested price came to $34,965. If you want a V6, the SXT Plus would be the way to go. If you want a bit more power, we would recommend checking out the R/T Plus as it features the 5.7L V8 and comes well-equipped. But if you want even more, then the R/T Scat Pack is what we would recommend. For under $40,000, you'll have a 485 horsepower V8 coupe with some bits from the more expensive SRT models such as larger brakes and improved steering. 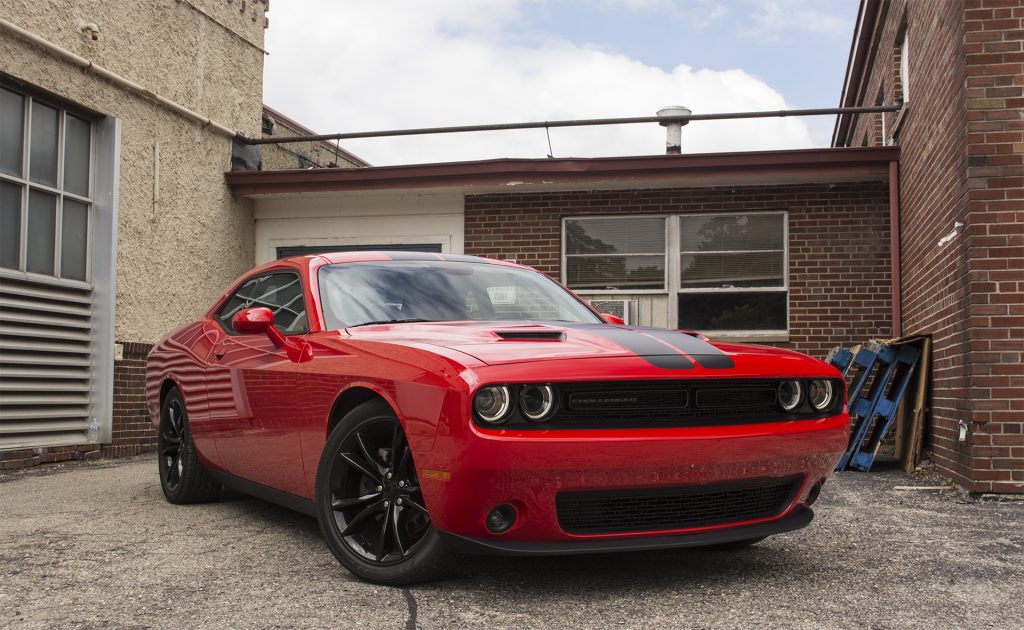 The Chevrolet Camaro and Ford Mustang have recently been redesigned and are considerably better than the Challenger in corners. Plus, the Camaro and Mustang are available as a convertible. The Dodge Charger which is essentially a four-door Challenger provides an extra two doors if you are planning to carry passengers in the back seat on a regular basis. Plus, you can get with the same engines as the Challenger.

The Dodge Challenger is an old-school muscle car reincarnated for this current century. The exterior has many of traits found on the original, and there is a wide range of engines to suit your need for speed. It might not handle as well as competitors, but then none of the original muscle cars were deemed for their handling characteristics. No matter which engine you choose, you'll have one of the most distinctive vehicles on the road.