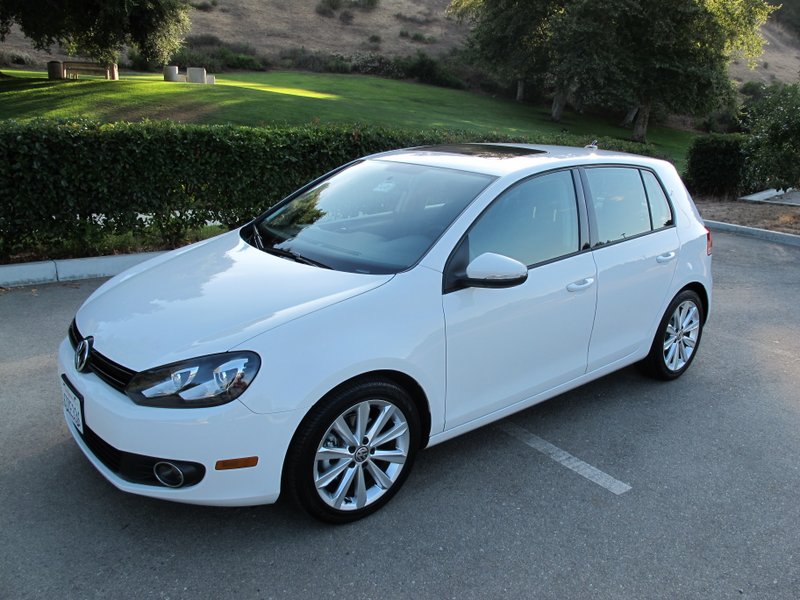 Introduction
With a new 7th generation Golf just around the corner in about a year's time after a dazzling LA Auto Show Debut, one might wonder if there is still sales life left in the current generation Golf hatchback be it in basic form or as a TDI model with Volkswagen's highly regarded and amazingly efficient 2.0 liter turbodiesel engine under the hood. Most Americans prefer sedans with trunks so the Volkswagen Jetta which used to be entirely Golf based has often times hogged all of the attention. That is, until some things changed.

When they last redesigned the Jetta which is built in Puebla, Mexico the powers that be at Volkswagen decided it would attract a wider slice of the compact sedan segment by lowering the cost which meant using much cheaper materials in the interior and ditching the advanced independent rear suspension used in the Golf for a simpler, cheaper and less effective torsion beam rear axle. The result is a Jetta that doesn't drive or handle quite as well as a Golf nor does it have an interior ambience anywhere near on par with this current compact hatchback class leader.

So while some may still insist they would rather own a car with a trunk, Golf buyers know that not only are they buying a superior automobile engineered to be truly world class but that having that extra door in the back really turns this vehicle into a utilitarian family runabout. Think of it as a compact crossover that's lower to the ground, actually fun to drive and incredibly fuel efficient and you have some idea of what the 2014 Volkswagen Golf is like. They have sold 30 million Golfs over the years so something has to be right with the formula.

All Golf models are available with either two or four doors and the option of a 2.5 liter 170 horsepower/170 lb. feet of torque 5-cylinder or a 2.0 liter 140 horsepower/236 lb. feet of torque turbodiesel 4-cylinder engine. Both are available with slick shifting six-speed manual transmissions whereas the 2.5 liter is optionally available with a conventional 6-speed automatic whereas the TDI model offers a quick shifting double clutch automatic also with 6-speeds. But the number of doors, which engine and which transmission you end up with are not the end of your choices.

If you are ordering a Golf 2.5 then you can buy a base model two door for as little as $18,095 with air conditioning, a 6-speaker audio system, power windows, locks, 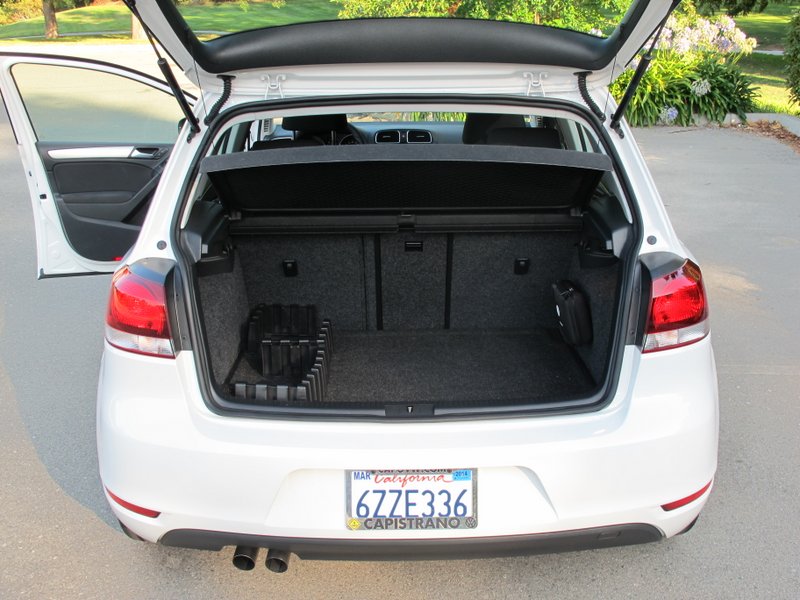 mirrors and all the essentials. Add the Convenience Package which ups the price to $19,295 and you get luxuries like a leather wrapped steering wheel and heated front seats. Lastly, the $21,200 Convenience with Sunroof Package adds (you guessed it) a power sunroof and steering wheel mounted controls. If you decide you want four doors then a base model is $19,995, the Convenience Package model goes up to $21,095 and a top of the line variant goes for $22,995.

Also note, according to the IIHS (Insurance Institute for Highway Safety) only the four door version of the Golf was named a "Top Safety Pick" for 2014 so if crash test results are a priority perhaps you should pick the four door model. As with all Golfs, the two door model is slightly less expensive with the entry level two door 2014 Volkswagen Golf TDI model coming in at $24,495 albeit with handsome 17-inch alloys, a lowered sport suspension, steering wheel mounted controls for Bluetooth, audio and cruise control, heated front seats and a premium touch screen audio system. That price scoots up to $26,225 when you add a power sunroof and navigation and with four doors this mid-range TDI model will set you back $26,895.

Our tester was a fully loaded $28,625 2014 Volkswagen Golf TDI four door with the six-speed manual gearbox and the Tech Package which adds a crisp sounding Dynaudio premium sound system, keyless entry and push button start as well as Bi-Xenon adaptive front headlamps that can swivel 15 degrees when you turn the steering wheel. Do note that all quoted prices are for models with the six-speed manual as automatic transmissions are extra.

If you think that the pricing for the 2014 Volkswagen Golf TDI is kind of steep, do keep in mind that each new model sold comes with a 3 year/36,000 mile zero cost maintenance package. In addition, the EPA estimates fuel economy of 30 city/42 highway for the TDI diesel which has proven to be a somewhat cautious estimate in our experience. A TDI can achieve Prius-like fuel efficiency yet never forces you to alter your driving style to suit the car. That's why currently the 2014 Volkswagen Golf TDI enjoys one of the highest resale value after 3 years in the entire auto industry. 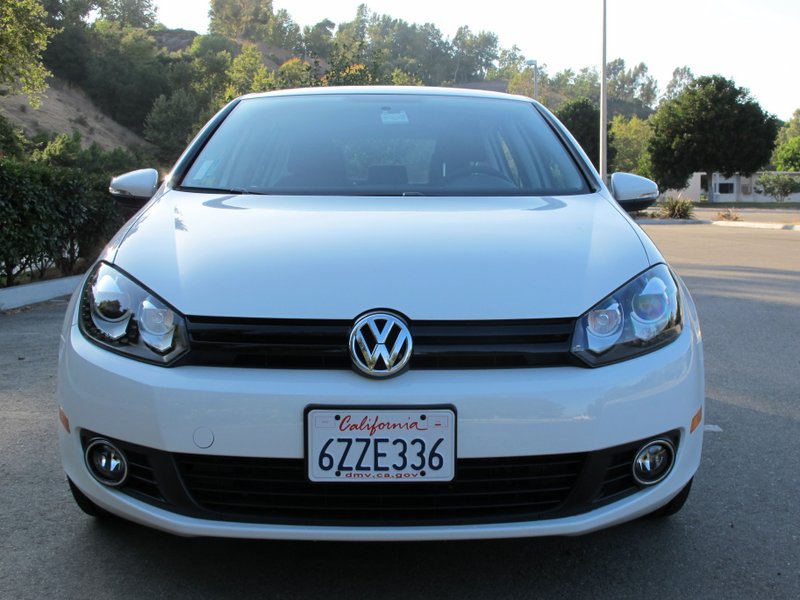 The Golf hatchback has kept a very similar silhouette over the course over its many decades in production but that isn't to say there haven't been much needed and modernizing evolutionary changes. The current Golf, for instance, shares the same corporate front end, lighting and grille design as most of the rest of the Volkswagen lineup like the Tiguan, Passat, Jetta and Touareg. It does not, however, share the cutesy bug eyes of the all-new Beetle, so clearly Volkswagen stylists have not lost all sense of right and wrong.

Don't get all upset with us now, the new 2014 Volkswagen Beetle with its more masculine, taut lines works in a retro manner that should prove appealing to many new car buyers. We, however, are slightly more traditional when it comes to our Volkswagens and there is nothing more traditional than a front engine, hatchback in the rear Volkswagen Golf. New Volkswagen Beetles with the engine out front don't count as sticking to the original Beetle rear engine vehicle formula nor is that somewhat impractical style statement very appealing to as wide array of the populace that it can still claim to be the "People's Car."

Our favorite aspect of our 2014 Volkswagen Golf TDI tester's exterior had to be part and parcel of ordering the Technology Package which includes Bi-Xenon headlamps, LED lights up front as well as swiveling AFS cornering lights that help you see around corners better on dark roads. Plus, the just look really, really cool but unfortunately they are only available with the TDI variant. 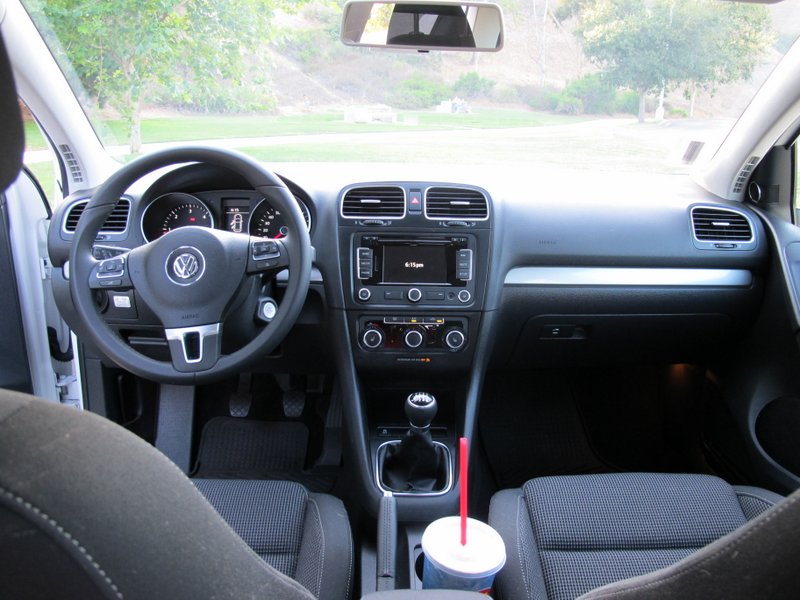 This is where the 2014 Volkswagen Golf and Golf TDI shine head and shoulders above the compact competition, including its lower priced stable mate the Jetta which uses cheaper plastics and feels less solidly built. When you sit inside the Golf, unlike in so many compact car interiors that rely too much on low grade plastics and low quality trim pieces, it feels like it could survive a bomb blast with nary a scratch. Control placement is the picture of simplicity with three knobs in charge of working the climate control and the touchscreen center screen for audio/navigation/phone and i-Pod is so straightforward you should never have to read the owner's manual unless you are particularly challenged when using such devices.

Our test 2014 Volkswagen Golf TDI also came with a standard MDI-i/Pod/USB cable conveniently placed in the center console which can therefore hide your smart phone or MP3 player away from prying eyes. Bluetooth audio streaming is also possible and all can be controlled via the easy to use steering wheel mounted controls for the phone/audio/trip computer/navigation and more. The steering wheel itself is thick and chunky in the Germanic tradition and is perfectly placed so the driver can also comfortably shift the manual transmission, rest their arm on the clever adjustable height armrest or adjust any one of the controls that are an arm's reach away. Really, car interiors don't come much more perfect anywhere near this price than the one found in the 2014 Volkswagen Golf.

As our time driving a Golf with the 2.5 liter engine was limited to a short period of time, all we can say is that it is a sufficiently powerful, roomy, well-built and affordable five door hatchback choice. The 5-cylinder gas engine doesn't feel as potent or as pleasant to rev out to its redline as the 2.0 liter 140 horsepower/236 lb. feet of torque TDI motor but then the strandard Golf will cost you substantially less. Although the Golf TDI is truly the star of this model lineup and perhaps the greatest vehicle fitted with Volkswagen's acclaimed turbodiesel motor, there is no shame in purchasing a Golf with the 5-cylinder engine. 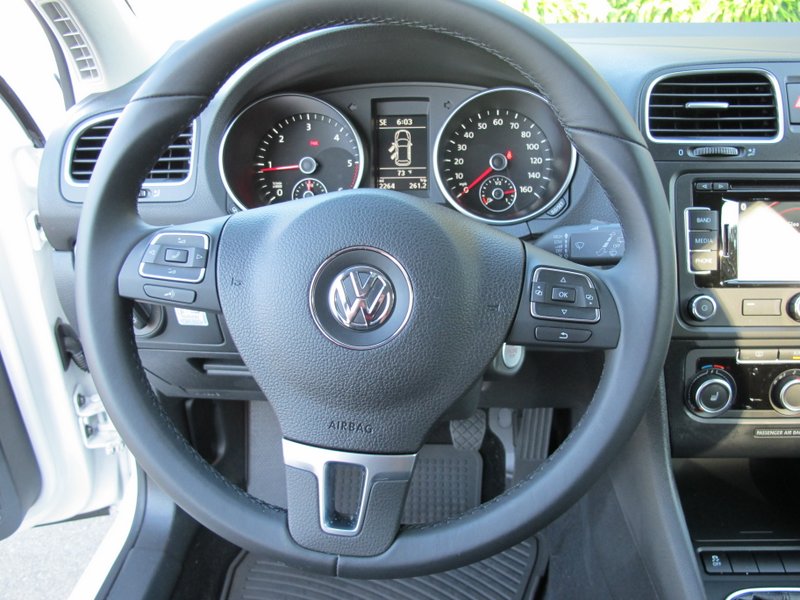 There are just some things that are true of both Golf models and among those includes delightfully communicative and perfectly weighted steering as well as low interior noise levels when driving at freeway speeds. While you can easily hear the clatter of the 2.0 liter turbodiesel outside of the car at idle, when you are driving with the windows up the motor is barely audible until it reaches redline where it still maintains a pleasant decorum. The 5-cylinder gives off a moreoffbeat thrum when you push it but it adds to the character of this very German hatchback.

Thanks to the standard four wheel independent suspension and our TDI tester featuring one of the slickest shifting 6-speed manual transmissions in the compact car segment, we felt like we were losing little in the fun to drive department to the much vaunted GTI. The TDI is powerful off the line, has averaged just over 50 miles per gallon on trips in our care with little concern for hypermiling and it corners just as any driving enthusiast would hope a Volkswagen hatchback would. Few vehicles are as capable overall, as frugal, as solidly built and as utilitarian as our 2014 Volkswagen Golf TDI and that's why we plan on keeping this road test going for as long as possible. To sum up, if you can afford a 2014 Volkswagen Golf TDI we promise you won't regret buying it.

The 2014 Volkswagen Golf model lineup has quite a varied array of competitors out there on the market and out smartest best would be to focus first on the 2.5 liter model which goes up against vehicles like the exemplary 2014 Mazda3 Hatchback, 2014 Ford Focus Hatchback, 2014 Subaru Impreza 2.0i AWD, 2014 Mitsubishi Lancer Sportback and the 2014 Hyundai Elantra GT. This still doesn't take into account compact cars with trunks like the 2014 Honda Civic, 2014 Kia Forte, 2014 Nissan Sentra and even the Volkswagen Jetta. For our money, we would check out the Mazda3 hatchback, Hyundai Elantra GT and 2014 Honda Civic along with this gas powered Volkswagen Golf variant.

Now, if you are in the market for a 2014 Volkswagen Golf TDI then we would most certainly have to recommend other high mileage vehicles like the 2014 Toyota 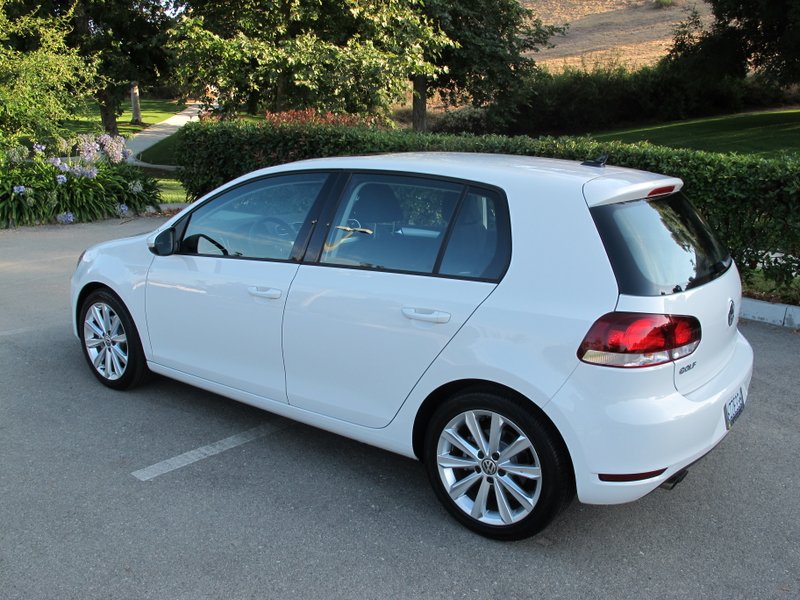 Prius and Prius V wagon, the Civic Hybrid or Civic Natural Gas and the new 2014 Chevy Cruze Diesel all of which are priced around the neighborhood of the Golf TDI. A 2014 Volkswagen Jetta TDI can be had for a bit less money than the Golf TDI but as we said earlier, its interior is not as nice a place to spend long hours and isn't available with everything offered on the German built diesel hatchback Golf. Lastly, the Golf boasts a 15.2 cubic foot cargo hold behind the rear seats which grows to near U-Haul proportions once you fold down the 60/40 split rear seats. Useful, frugal and fun to drive, the 2014 VW Golf TDI is really all the car you'll ever need.

Our test vehicle was a four door 2014 Volkswagen Golf TDI with the Tech Package that we have been using as a long term road tester for over five months now. Our tester has been completely trouble free, has as of yet required no maintenance and as part of the Tech Package it features a premium Dynaudio stereo system, in-dash navigation, a power sunroof, high power Xenon headlamps and push button start with keyless entry.