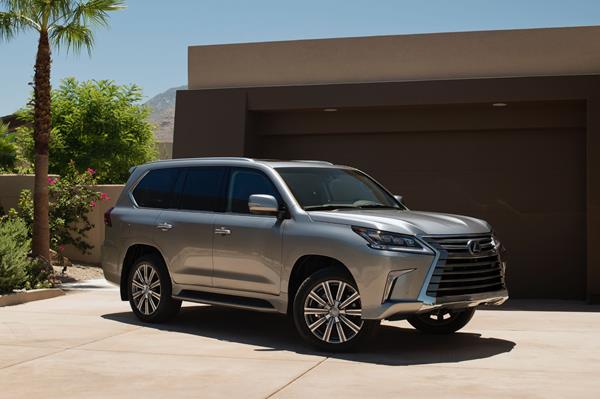 The 2019 Lexus LX 570 combines two things not often matched well in the luxury sport utility market: true off-pavement capability and rich luxury. The LX 570 was introduced in its current form in 2008 and has held steadily to its place in luxury SUVs since.

Based on the Toyota Land Cruiser, whose name is legendary in sport utility greatness globally, the LX 570 has its own credentials as a rugged SUV as well. Including multiple off-road rally and Baja wins. Although aspects of the 2019 LX 570 are dated compared to many luxury rivals, the Lexus still holds its own thanks to well-vetted capability and timeless comfort.

New for the 2019 model year, the LX 570 can be optioned without a third row and with added options exclusive to that version. Those options include a new head-up display, wireless smartphone charger, a refrigerated coolbox in the front center storage bin, and exclusive sound and infotainment upgrade options.

The 2019 Lexus LX 570 is a luxury two- or three-row SUV that seats up to five or eight passengers. Both models come in a well-heeled base configuration with a few options and add-ons available beyond that. All LX 570 models are four-wheel drive. 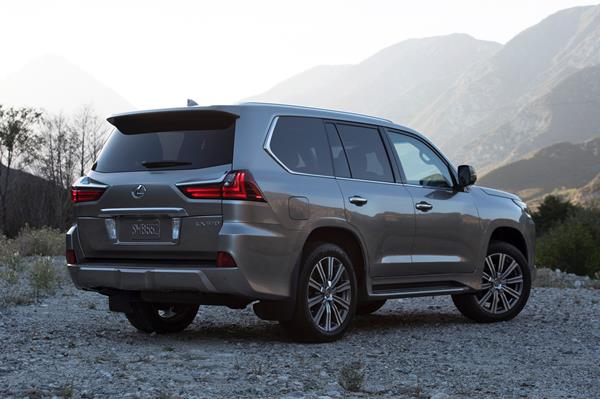 The 2019 Lexus LX 570 is a good-looking, but somewhat dated and polarizing SUV. The Lexus front grille is where most onlookers give pause and it holds a definitely "love it or hate it" quality. Lexus has changed the grille over time, and it now sports horizontal slats running across, end to end. This has reduced the impact of the huge, dominating grille compared to previous designs with meshed covers. Yet it still can cause some onlookers to balk.

The overall body design for the 2019 LX 570 hasn't changed since this generation was introduced about 11 years ago. It's a square, no-nonsense design at its core, sporting a flat hood, flat roofline, and straight lines along the bodywork. This emphasizes the LX 570's truck-based capability and roomy insides.

The LX 570 sits tall and proudly, comfortable in its ruggedness. Yet the luxurious touches of its front lighting, chromed edges, and beautiful wheels ensure that there is a softness to this beast. 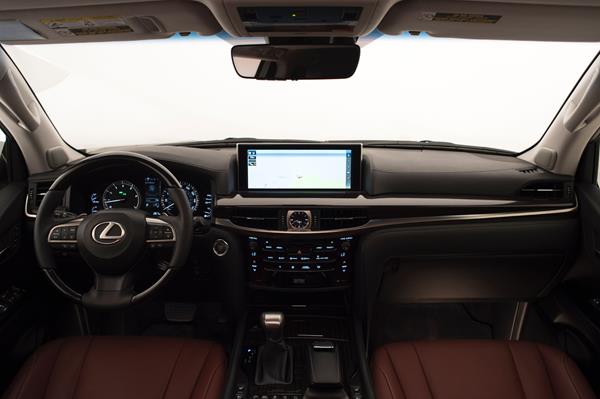 Premium materials make up the construction of the LX 570's interior and it really pays dividends. The big Lexus SUV employs the luxury automaker's expertise in quality choices throughout. Premium leathers, well-chosen woods, and top-quality insets are the norm for the 2019 LX 570. Those are definite high points and hallmarks of the Lexus brand.

The front seats are very well done and feature optimum comfort and adjustability. Heating and ventilating are available for the front row. Switchgear and controls are all of excellent design and easily accessed and understood. There's little to fault in the Lexus LX 570's front seating and layout. The truck-like nature of the SUV and its extreme capability off the pavement are apparent in the design, but aren't overbearing in their presence.

The second-row bench is also very well done. It's adjustable both in slide and recline (electrically controlled) and will do well with two or even three across. The spaciousness and wide bodied design of the LX 570 mean that there is a lot of room on that second-row bench. Comfort options aren't as plentiful as are found in the front, of course, but there's little to complain about in the second row of the LX.

The third row is oddly-positioned, taking up cargo space when not in use, and cramped. Adults will not enjoy being back there. Kids under the age of 12 might not complain, but as legs and torsos get longer, comfort gets shorter in the LX 570's third row. Access is also not easy as the middle row does not fold forward as well as might be hoped. Further, parents should be aware that there are no LATCH anchors for child safety seats in the third row, so it's seatbelt and tether only.

We do like the plentiful distribution of standard features in the big LX 570. Quad-zone climate control, a large 12.3-inch infotainment display, 360-degree camera system, front and rear parking sensors, adaptive cruise control, and more are all standard. Available in the 2019 Lexus LX 570 are a rear seat entertainment system based on huge 11+inch screens, a Mark Levinson stereo upgrade, and some items exclusive to the two-row model as discussed in our introduction. 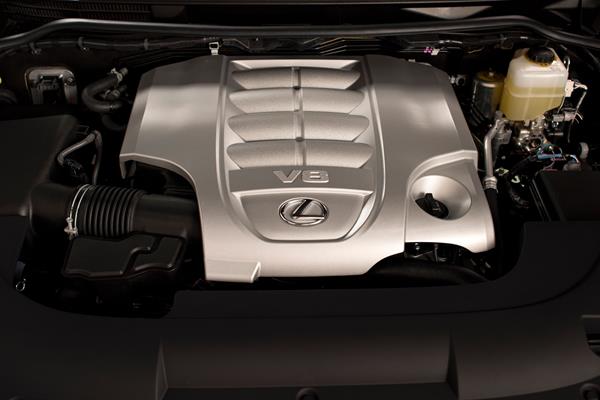 Like all Lexus vehicles, the LX 570 features a large infotainment screen with a great-looking design as part of the dashboard. This screen in the 2019 LX 570, however, is not on par with what's expected in today's luxury segments, with sharp graphics output mated to a very outdated interface. That interface is hampered further by the Lexus Remote Touch Controller, a mouse-like device on the center console near the shift lever. That Remote Touch Controller is painful to use and often highly distracting. These qualities are made worse by the rougher ride of the big SUV's inherent capabilities as an off-roader.

The world of luxury vehicle offerings isn't generally known for easy infotainment as a rule, with most luxury automakers having difficulty supplying infotainment that's as refined and well-done as many found in the mainstream markets. Yet even among this atmosphere of struggling interfaces, the Lexus Remote Touch interface chokes and sputters at the bottom of the heap.

The big 2019 LX 570 has the lowest fuel economy returns for its class. At 13 mpg in the city and 18 mpg on the highway, per the EPA, the big SUV trails behind most of its competitors. Worse, real-world returns rarely live up to those EPA estimates. Our week with the two-row LX 570 model saw an average of only 14 mpg overall in total economy. That was without including MPG during off-road maneuvers with the SUV.

The Lexus brand has a well-deserved and strong reputation for reliability and dependability. The LX 570 does not disappoint or drag the brand down, earning a J.D. Power and Associates Vehicle Dependability Study rating of "Among the Best" as an SUV. In addition, the Lexus brand is the top brand for Consumer Reports' 2019 reliability rankings and the LX 570 is top in its class for that metric. 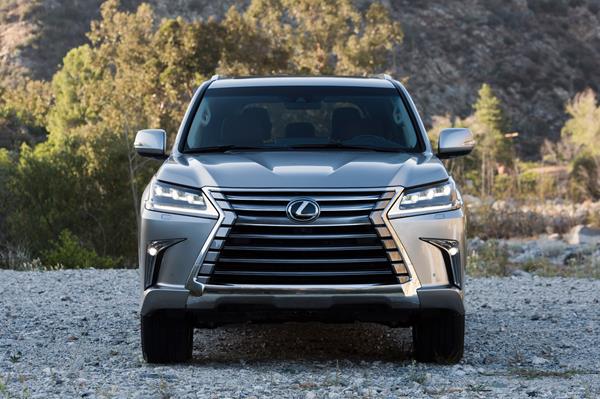 Neither the National Highway Traffic Safety Administration nor the Insurance Institute for Highway Safety have published crash test results for the 2019 LX 570. The LX has a reputation for being safe and includes several advanced safety technology features as standard equipment.

The 2019 Lexus LX 570 is powered by a very well-vetted 5.7-liter V8 that outputs 383 horsepower and 403 pound-feet of torque in a predictable power output curve. The eight-speed automatic attached to the engine shifts well and feels strong in most situations. Nothing about the LX 570 is quick, but everything about it is powerful and confident. Four-wheel drive is standard in the big SUV and towing is rated at 7,000 pounds, when equipped.

On the road, the LX 570 is a big, truck-like drive with a wide stance and bulky nature. The engine grows comfortably during acceleration and the high ride height and visibility offer a lot of confidence to the driver. Road cushioning is good, but not nearly on par with the more sophisticated (and generally less capable) competition.

Off the road, the 2019 LX 570 is a powerhouse of capability. Able to bounce, climb, slog, and run with the best of them, the LX deserves its reputation as an off-road legend. There's little that the LX 570 cannot do when out in the wilderness.

The 2019 Lexus LX 570 is the most expensive three-row luxury option on the market. It's also much more expensive than its equally-as-good and also very luxurious Toyota Land Cruiser stablemate.

Where the value is found in the big LX, though, is in its resale value (which is very high) and its reliability (also high). Comparatively, on those points, few in the luxury classes can compete. The huge up-front cost and low fuel economy of the LX 570 are big down points, though, that explain its slow sales compared to rivals. Buyers can spend up to $15,000 less and get comparable luxury with equal or better interior roominess.

The 2019 Lexus LX 570 is definitely a specific choice from a consumer. If unmatched off-road capability is a requirement in your luxury SUV purchase, the LX fits perfectly. 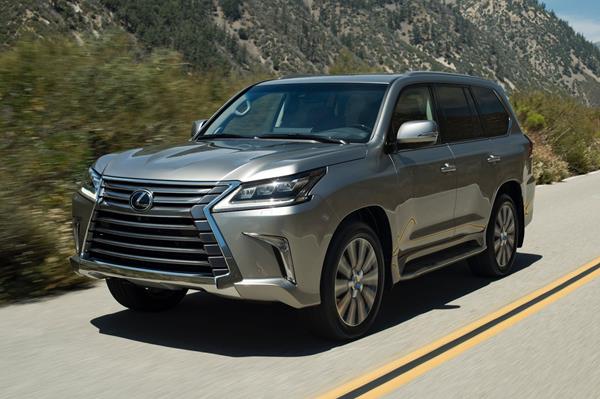 There are several comparables as rivals to the 2019 Lexus LX 570, starting with the very comparable and mechanically identical Toyota Land Cruiser. The Land Cruiser is similarly luxurious, but less premium-level stylish than the LX 570 and is price-comparable. Also competitive are the Land Rover Discovery and Land Rover Range Rover, both of which are price-comparable, similar in luxury, and newer in design. The Land Rover models have similar capability to the Lexus, but offer better fuel economy and a more modern interior. Also comparable to the LX 570 is the Mercedes-Benz GLS, which is not quite as off-pavement capable, but which has better fuel economy and higher levels of comfort and luxury.

The 2019 LX 570 competes in a small sales market of big contenders. It's generally pricier than most of its rivals, but has a lot more off-road capability, value retention, and dependability than nearly all comers. The Lexus is, however, showing its age and cross-shopping is recommended.