The Volkswagen Tiguan is new for 2018. VW has up-sized the Tiguan to better fit the larger end of the compact crossover segment, after having occupied the small end for about six model years. This is a wise move. Although VW has been in the United States longer than Subaru, the company is just now noticing that Subaru's sales exploded when it redesigned its crossovers to fit the American market's size expectations. This is VW's attempt to give American buyers what they want, rather than a Golf on stilts - which is what the previous Tiguan was.

The Tiguan is now sized right, and it even has an optional temporary-use third row for children. The Tiguan and Mitsubishi Outlander, now join the top-selling Nissan Rogue in offering this handy feature. With the term "compact" being a poor word choice for this roomy segment, the Tiguan may well be the perfect size for many families.

The Tiguan is offered in trims priced from about $26,000 to about $39,000. The Tiguan is offered in both two-wheel drive and with Volkswagen's 4Motion all-wheel drive system. Unfortunately for Volkswagen, the Tiguan's 2.0-liter engine and 8-speed transmission was a disappointment. (Particularly since we recently drove the Volkswagen Golf Alltrack with its 1.8T engine and 6-speed DSG transmission.) Shoppers considering a new Tiguan should be aware that VW is still selling the old design under the name "Tiguan Limited."


What We Love About the 2018 Volkswagen Tiguan SE 4Motion:


What We Don't Love About the 2018 Volkswagen Tiguan SE 4Motion:

The 2018 Volkswagen Tiguan has its own design language. Unlike the segment-leading CR-V with its tacked-on curves and angles, the Tiguan is relatively boxy and utilitarian in appearance. We say that with only the best implications. The up-sized Tiguan has a more mature look and it is easy to see the German heritage in its styling. This Volkswagen has a look reminiscent of the older Audis before their current design and we love it. 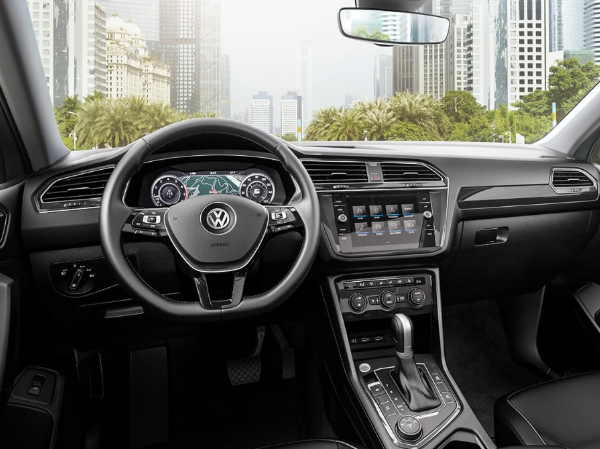 Inside, the 2018 Volkswagen Tiguan feels roomy in most ways. The legroom is more than adequate to allow second-row passengers to sit comfortably behind adults in the front without the front passengers needing to move their seats forward.

Headroom in the first two rows is also more than sufficient. Our tester was a $32,480 SE 4Motion trim with just two rows and five seating positions, so we cannot comment much on the third row. We will say that in this size, the third row will work well for carpool duty, but is not a viable option for everyday use, even for children. And that is exactly how it was designed. We love that the Tiguan offers this $500 option (standard on 2WD trims). 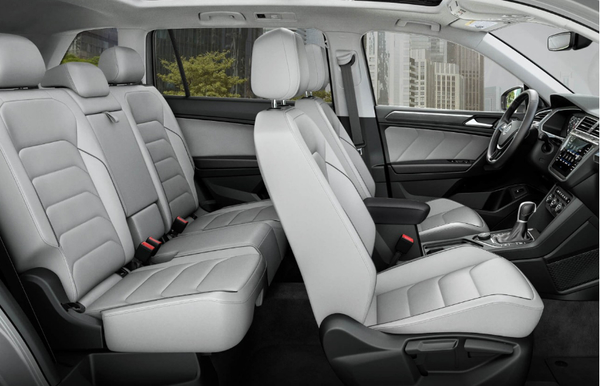 Volkswagen is known for its excellent ergonomics, and our Tiguan was a standout in this regard. Every control is easy to use and the infotainment touchscreen is so simple it should be the industry template. The front seats in our Tiguan were heated and ventilated, but not cooled. The driver's seat was powered, but the passenger's was not. We found the V-Tex leatherette material fit the price point. VW is expert in mid-trim interior materials and in the new Tiguan it shows.

One feature that we really appreciated was the panoramic power sunroof. It extends quite far back over the second row and when open makes the car feel airy. Even better, the power sun shade is a mesh material that allows some light in when closed (to reduce solar heating). This helps brighten up the cabin considerably.

The Tiguan does not have the open and airy feel of a Subaru Forester. The roof line seems to come down further even when the driver's seat is fully lowered. Side glass area is average, but rear-visibility views out the back window are better than average. 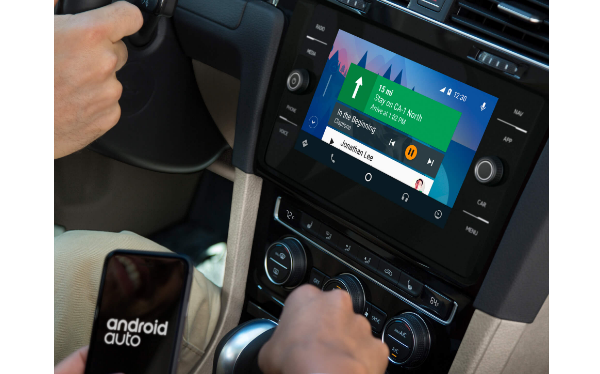 The available infotainment systems on the 2018 VW Tiguan are outstanding and the optional systems on top trims rival the best in the luxury segment. Our SE trim had a large, clear touchscreen that we found easy to operate and use. Synching a phone, setting a station preset, using the knob to find another station, and the volume knob are all excellent in terms of ergonomics.

Our SE didn't have Nav, but it did have Android Auto and Apple Car Play. This has become our preference now. The benefits to consumers are huge. No more obsolete systems, no more paying for map updates and your phone is your nav and address book, so it is always updating.

How to put this nicely? The Tiguan is a decade behind in fuel economy. The leading vehicle in the segment for fuel economy is the Honda CR-V. Its AWD trim earns a 29 mpg combined rating. The Tiguan 4Motion is rated at just 23 mpg combined.

Volkswagen is rated just below average in the 2017 JD Power Vehicle Dependability Study. Consumer reports gave the 2018 Tiguan a 4/5 rating and a "yellow" grade for predicted reliability. 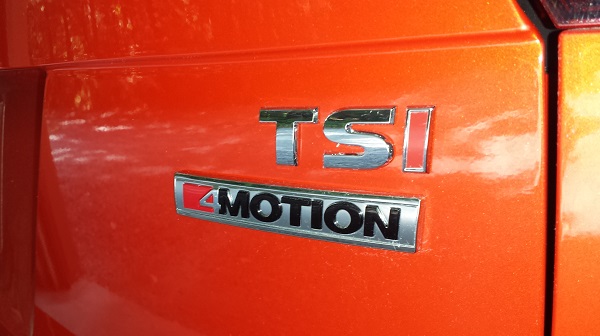 Our Tiguan SE had a very clear rear-view camera system, but that was pretty much it for modern safety equipment. Our tire pressure monitoring system gave us an alert while we tested (false alarm), and we then discovered it does not even tell the driver which tire is low.

The Tiguan's competitors, the Toyota RAV4, Nissan Rogue and Mazda CX-5 all offer standard (no added cost) forward collision prevention with auto braking on every single trim. The Honda CR-V includes this important technology on all trims except its base trim. Every one of these models and the Subaru Forester is a Top Safety Pick Plus. The Tiguan has not yet earned that designation. The Tiguan has brought a knife to a gunfight in this segment in terms of safety.

Our Tiguan was a mixed bag for performance. First the good news: The new Tiguan has outstanding road feel and a very comfortable ride, and is a great highway cruiser. We drove the Tiguan back-to-back with a 2016 Forester 2.5i Premium and it was better in terms of handling and equal in ride comfort. We also drove it back to back with a 2014 BMW X3, which we think is the benchmark for road manners. It was the match of the BMW at a price point only two-thirds of what the BMW would cost. VW's are known for good ride manners, but until one is behind the wheel it is hard to put a value on this important aspect of design.

Now the bad news. VW does not use the same drivetrain in the new 2018 Tiguan as it does in its Golf Alltrack. In our test notes of the new Golf Alltrack we wrote about its drivetrain, "Power feels plentiful, and the Golf Alltrack is quick around town. It's a wonderful engine and the fact that VW's can now use regular unleaded fuel makes them more economical."

Not so with the New Tiguan. The 2.0-liter turbo is the lowest power rated engine of this configuration on the market. However, that is not the real problem. Hesitation and herky-jerky starts are. The engine and drivetrain conspire to delay forward progress in a way that is very frustrating. Is it turbo-lag or an over-aggressive shift program? Other car reviews have reported the drivetrain tuning issues as well. 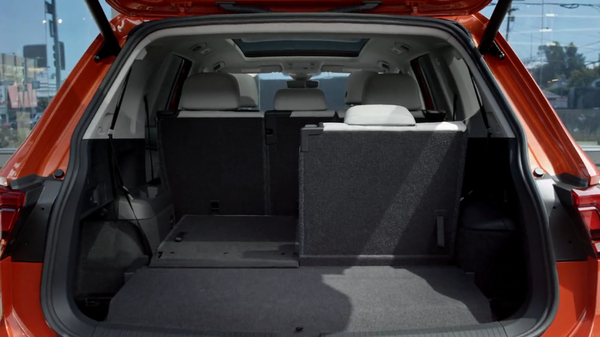 At $32,480, our S2018 Tiguan SE 4Motion falls in the same mid-trim price point that its peers do. However, without standard active safety and with a drivetrain we can't recommend, the Tiguan is hard to call an outstanding value. The Tiguan's longer than average warranty (an impressive 6-years, 60,000 miles bumper-to-bumper) ups the value, as does the recent willingness of VW dealers to slash prices to help make up for sales lost to its now-discontinued diesel models.

With the unusual situation VW is in, a Tiguan may end up a value that isn't easy to see if just the MSRP is considered. Those who prefer to use Apple Car Play or Android Auto may also find that not needing to purchase navigation adds to the value proposition. Volkswagen vehicles have long been questionable values, but the new Tiguan is not.

The 2018 Volkswagen Tiguan is a perfectly sized compact crossover with good looks, its own style, outstanding ergonomics and high-tech infotainment options. The Tiguan's handling is on-par with the premium crossovers in this size vehicle. An optional third-row seat is a plus, as is the bright interior when the optional sunroof is included. Shoppers should try the drivetrain and be sure to add in the cost of active safety equipment when making their decision about the new Tiguan.