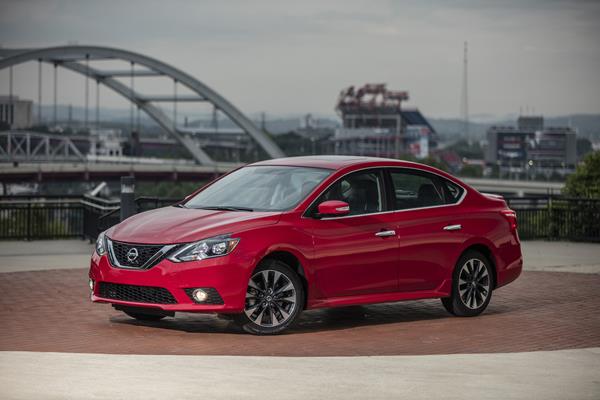 The 2018 Nissan Sentra is a practical, well-priced compact sedan. Redesigned for this generation a couple of years ago, the Sentra ticks all of the boxes for the compact segment. Improvements from that generational upgrade were enough to make the Sentra very competitive in its segment.

This year, the 2018 Sentra sees only minor shuffling of features through the trim packages and the addition of automatic emergency braking as standard on most trim points. The Sentra is otherwise unchanged from 2017. 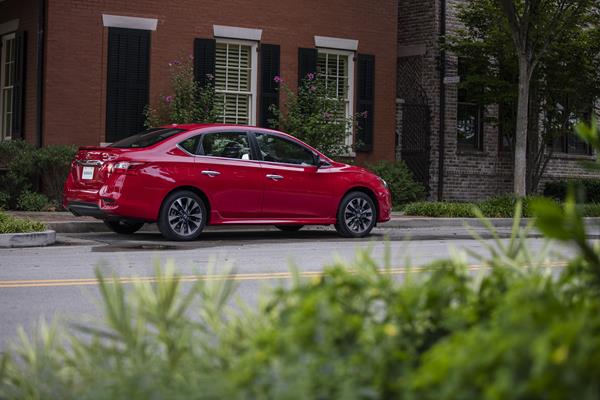 The 2018 Nissan Sentra is a parking lot blender, with perfectly done camouflage to keep it visually hidden from interest. It's not ugly, but it's not eye-grabbing either. The design language comes from 2013 when the Sentra was considered sporty and balanced. In today's market, it's no longer a looker and is becoming a visual slouch.

But we can point out that the 2018 Sentra has some shapely points to its overall design. Visually, it has a balanced look that we like. The hood and trunk are about the same visual size, giving the Sentra a strong three-piece appeal. Details like the sporty fender rounds, curved beltline and straight-backed rear give the Sentra some forward motion as well.

Yet the Sentra's practicality generally wins out in the overall design. Small wheels pulled in from the corners, and simple edges to the bumpers and lower paneling are more flat shoe than heel. 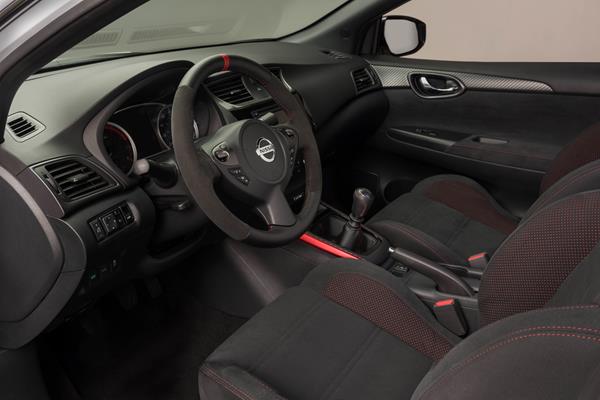 The somewhat bland exterior of the 2018 Sentra hides the excellent interior of the car. Basic functionality is the motif inside the 2018 Nissan Sentra, but this is done in such a way as to give upscale appeal and strong ergonomics to the sedan.

This starts with the three-prong steering wheel, a simplified instrument cluster and a flowing center console design. The dashboard has a Euro-curve to it that adds form without impeding function in a simplistic pattern that gives a sort of minimalist appeal to the Sentra without the impracticality that word often implies.

The driver will be pleased with the near-perfect alignment of controls and interfaces for daily use. Adjustments can be made to make this exactly right for most people and the floating feel of the seats, when properly adjusted, make them the most comfortable we've been in. Added last year was thicker acoustic glass for the windscreen, which lowered interior noise levels significantly.

Interior storage is very good in the Sentra, with plenty of places for gadgets and gear throughout. Seating up front is almost luxurious. In the back it's also excellent, with some of the best accommodations we've seen in the compact segment. Three across is doable, but two is more realistic. Most will be surprised at how much headroom and legroom there is in the Sentra, which is closer to par with the midsize than the compact segment.

The trunk has storage for 15.1 cubic feet and the rear seats are in a 60/40 split-fold as standard in order to add more when required. 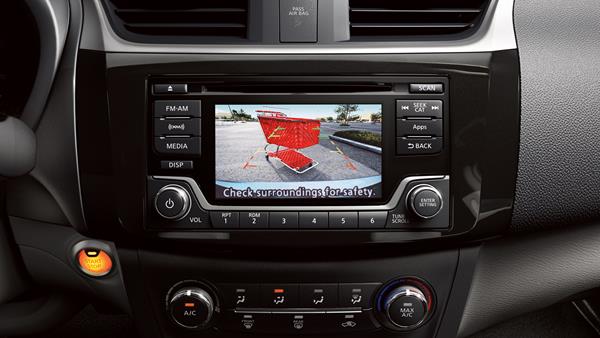 Tech in the 2018 Nissan Sentra begins with a 5-inch touchscreen found in the SV package, which can be upgraded to a 5.8-inch screen in upper trims or as options in some lower trim levels. With either screen, graphics are decent and responses are good, but functionality is relatively limited compared to the current segment expectation.

The lower-end screen has basic NissanConnect functions, including Bluetooth connectivity, but not much more. The upgrade adds navigation and voice controls, the latter being the more useful of the additions. The dated interface becomes much simpler to use when hands-free voice commands are utilized.

Fuel economy in the 2018 Sentra is generally better than average. The standard engine returns good daily economy while the turbocharged engine reduces economy in favor of sportiness.

The base engine with the manual transmission is EPA rated at 30 mpg combined, with 27 mpg in the city and 35 mpg on the highway. Going with the automated CVT raises economy to 32 mpg combined (29 city, 37 highway). 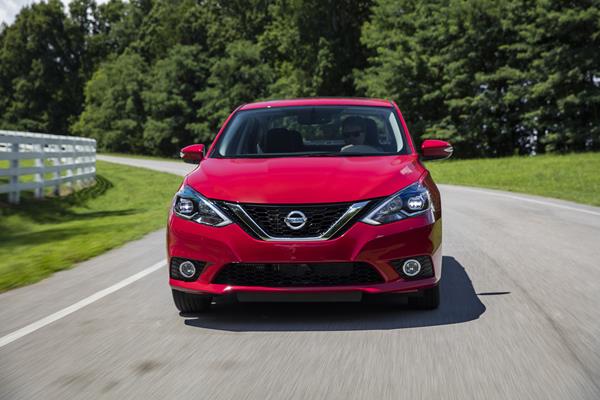 The 2018 Nissan Sentra has a J.D. Power and Associates Vehicle Dependability Study return of "Better Than Most." This is better than its 2017 score and combines with a lack of recalls to give us confidence in the car.

The 2018 Sentra received good crash test scores from both crash testing bodies. The National Highway Traffic Safety Administration (NHTSA) rates the 2018 Sentra with a 4-Star overall rating. The Insurance Institute for Highway Safety (IIHS) gave the 2018 Nissan Sentra top scores of "Good" on all of its crash tests so far, which is in line with its returns last year.

The addition of automatic forward collision mitigation this year adds another element of safety not seen in previous years of the Sentra. 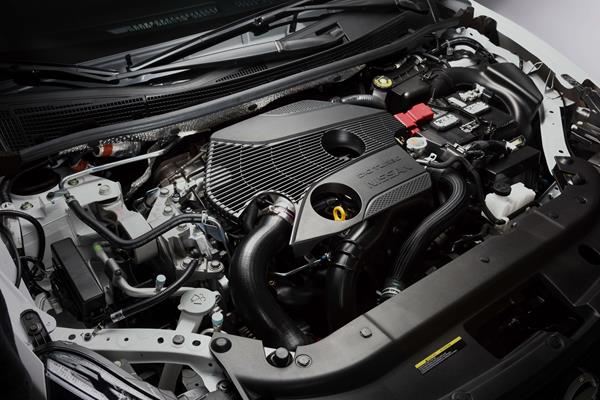 There are different performance returns for the varying trim and engine options in the 2018 Nissan Sentra. The base engine is a 1.8-liter four-cylinder that outputs a fairly underwhelming 130 horsepower and 128 pound-feet of torque. This is enough to motivate the Sentra through town without fuss, but it's often sluggish on the highway and brings little excitement to the car. A six-speed manual transmission is standard in the lower trims with an upgrade to a CVT as optional.

Acceleration is slow and handling is uninspired in the 2018 Sentra, making this a pure A to B car and not much more.

With the turbocharged sport models, the 2018 Sentra changes personality. The 1.6-liter turbocharged four-cylinder found in the SR Turbo and Nismo models boasts 188 horses and 177 lb-ft of torque. A six-speed manual is again standard, with an optional CVT upgrade available. In either package, the Sentra becomes a fun drive with better handling due to suspension stiffening for the sport models.

Being one of the lower-cost compact sedans on today's market doesn't mean that the 2018 Nissan Sentra skimps on equipment. It's well equipped for the price and tops out at only $25,000 for the most expensive Nismo model. This makes it possible for almost anyone to find an affordable Sentra to fit their needs.

We think most buyers will feel like they've gotten their money's worth with their Sentra purchase. 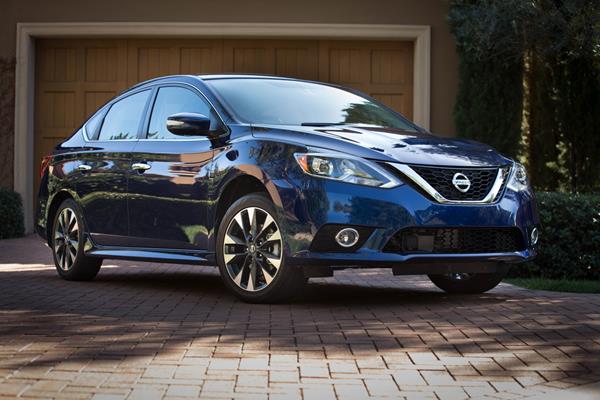 The compact sedan market is full of competitive options. The 2018 Nissan Sentra is more practical minded than many and is generally more value oriented as well.

The Ford Focus and Mazda Mazda3 are good choices for those looking for more sport and flair in their everyday compact. Hatchback options are also good rivals against the Sentra, including the Volkswagen Jetta and Hyundai Elantra.

Compared to all of these, the 2018 Sentra offers a compelling choice that runs the gamut from everyday practical to the fun and practical, with attractive price points. The base model Sentra is sensible, while the SR Turbo and Nismo models add zing.

In our minds, the only thing really holding back the 2018 Nissan Sentra is its bland everyday exterior look. It's otherwise a highly competitive, very well-done compact car.