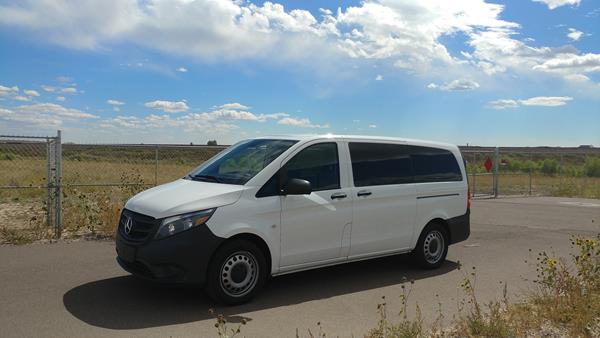 Introduced three years ago to replace the Sprinter van formerly sold in conjunction with Fiat-Chrysler, the 2018 Mercedes-Benz Metris carries forward with the design that makes it unique in the segment. As commercial vans go, the Metris is a good value given its midsize design, fitting somewhere in between the smaller city vans and much larger cargo vans now commonly seen.

The Mercedes-Benz Metris is often a bit more expensive than rivals. But because of its unique size and its better options packages and (often) resale value, the Metris remains a good choice in the commercial market. The Metris comes in a variety of upfitter packages for cargo and work duties, as well as a Passenger model that offers better interior refinement and lots of seating.

For 2018 the Metris continues with its design largely unchanged, but adds a longer wheelbase option and makes the rearview camera standard across the lineup. Several advanced options such as leatherette upholstery, automatic climate control, blind-spot monitoring, lane departure warning, and more are available for the Metris, making it one of the more user-friendly of the commercial offerings available.

The 2018 Metris is split into two basic styles, each with two trim pakages. The Cargo model is what its name implies and is offered as a Worker Cargo spec for lower-end buyers. The Passenger model has two rows of seating and side windows, while the Worker Passenger drops many of the extras added to the standard Passenger to cater to budget fleet buyers. 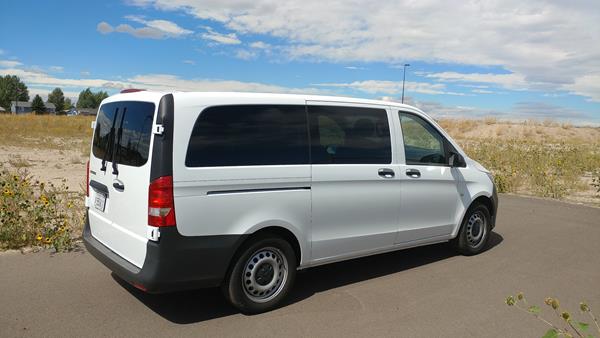 What We Love About the 2018 Mercedes-Benz Metris:


What We Don't Love About the 2018 Mercedes-Benz Metris:

It's not hard to see why the 2018 Mercedes-Benz Metris' exterior ranks high when it's compared to other commercial van options on the market. Most professional vans are basically square boxes with wheels and, probably, a roof rack. The Metris is far less of an eyesore, which is unusual given that most of the competition seems to put very little stock in exterior design.

The front fascia and black grille with its prominent Mercedes-Benz emblem starts off the 2018 Metris, flowing up to a fast-climbing hood that melds into a raked windscreen. Short fenders and an aggressive bumper guard finish the front end's look, giving the Metris a more mainstream, consumer-grade look than most of its commercial contemporaries.

From the side the 2018 Metris takes on a more work-ready look with square side panels and not a lot of showiness. Small details, such as the lower running board cut, bone lines near the door handles, and the slightly sloped appearance of the roofline make this more tolerable. The plain wheels on most Metris models are matched by over-large side mirrors for better rear visibility. Passenger models come standard with window glass in the sliding doors, while cargo models do not.

The rear doors of the 2018 Mercedes-Benz Metris open in a 50-50 split to each side and are wide enough to fit a standard pallet directly into the van, with room to spare on either side. 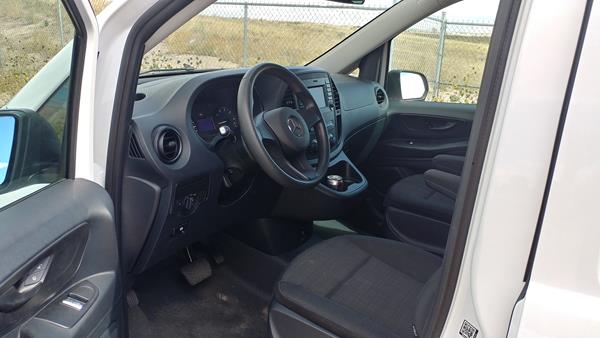 Commercial van interiors are nothing like consumer-grade vehicles, in terms of comfort and passenger ergonomics. Yet the Mercedes-Benz Metris does a pretty good job of melding the two when upper-level accouterments are requested. Seating for driver and front passenger is excellent in the Metris, with good adjustability and thoughtful padding and upholstery.

A lot of thought was given to working needs in the 2018 Metris, with the dashboard tilted toward the windshield and pockets added to allow clipboards, paperwork and other items to be dropped in without flailing about. That's a nice touch. The extra drink holders and space for a smartphone are also nice touches.

In the 2018 Metris Passenger models, seating for up to eight (including driver and front passenger) is available. Most limousine-style buyers will probably go for the seven-passenger version that notches out a seat in the second row so access to the third row is more convenient. With a full passenger load, the 2018 Mercedes-Benz Metris still leaves a spacious 38 cubic feet of cargo space behind the third row. Passenger benches can be removed easily via the clip-lock system that fastens them to the floor.

Metris Cargo models have 186 cubic feet of cargo room, with no passenger row clip-rails and no seating included. Instead, a flat loading area is standard, with D-hooks for cargo fastening. The rear doors and side sliding doors open wide enough for a pallet to be inserted into the cargo area without requiring unstacking.

More upfit options for the Metris Cargo and Worker Cargo are available to customize for more specific needs in various industries. These include shelf racks, interior plugs and sockets, hanging racks, bin and shelving for delivery, and more. Additional tie-down options and other securement are also available. Dock-ready fold-back rear doors on 260-degree hinges are standard on Metris Cargo models.

The Metris Passenger is quieter on the road than most other commercial vans, though not as quiet as some purpose-built shuttles and small buses. 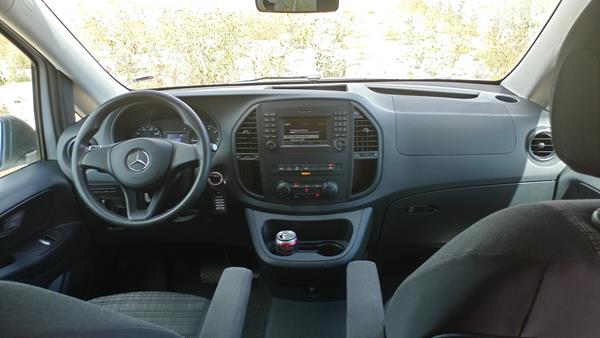 The standard package in all 2018 Mercedes-Benz Metris models includes a 5.8-inch infotainment screen. Worker models have a monochrome display, while full models have color. Both are controlled by a small knob at the bottom right of the screen. That knob works kind of like a joystick, but is both oddly placed and hard to use, bringing little in the way of intuitiveness.

The distracting infotainment is partially mitigated by the fact that it's not very good at doing much, so most users will set a radio channel or accept/make phone calls and call it done. Navigation is optional, but not recommended.

The EPA rates the 2018 Metris at 21 mpg in the city and 24 mpg on the highway in its standard formats. Most users will likely meet these expectations unless routinely driving with heavy loads. After a week in the Metris Passenger model, we achieved 25 mpg on the highway without much trouble and averaged about 23 mpg overall.

There isn't much to go on for reliability ratings in the 2018 Metris, but as the vehicle has remained fundamentally unchanged for a few years, we can use past measurements to predict the 2018 model's expectation. For that, the Mercedes-Benz lands in the middle of the road on most fronts. Its rating is slightly helped by Mercedes-Benz's good reputation for commercial vehicle reliability.

The 2018 Mercedes-Benz Metris is not generally the kind of vehicle subjected to crash testing by the National Highway Traffic Safety Administration or the Insurance Institute for Highway Safety. The Metris does have more standard safety equipment and options than just about any competing commercial van, which boosts its score.

The standard backup camera and wind-blowover prevention system (Crosswind Assist) are a huge boon to the van's safety. The Active Safety Plus package adds several driver safety aids, including blind-spot assistance and collision alert/prevention. Side curtain airbags in the Passenger models are standard.

The 2018 Metris has a 2.0-liter four-cylinder engine that's turbocharged to produce 208 horsepower and 258 pound-feet of torque. These numbers are solid for a van of the Metris' size, but preclude towing as a real option. Most commercial buyers don't generally tow with smaller vehicles like this.

The Metris has a seven-speed automatic transmission and rear-wheel drive as standard. These provide a good driving experience, great maneuverability and a confident feel. The transmission helps makeup for the engine's smaller size when loads are present, but will struggle some at highway speeds under heavy cargo.

Acceleration around town and up to the freeway are great in the 2018 Metris, and the engine and transmission remain quiet under all but the most strenuous workloads. 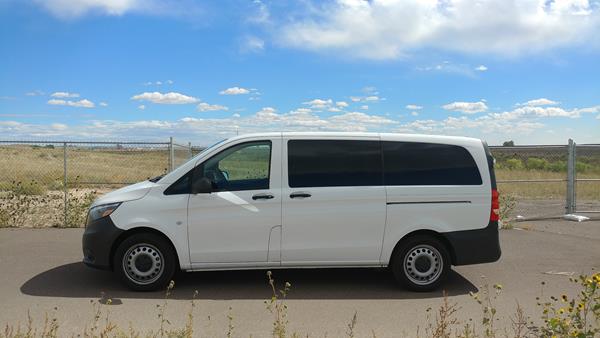 In exchange for its generally higher cost over the competition, the 2018 Mercedes-Benz Metris has better comfort and driveability, and more useful cargo and passenger space than the smaller rivals. The payoff is mostly in daily comfort and fuel economy versus usefulness.

Most small fleet and single buyers are likely to be interested in the non-Worker models for their higher level of options and accouterments. Larger fleet buyers will like the Worker options for their lower price points.

In addition, Mercedes-Benz commercial vehicles tend to hold resale value better than do most in the market.

The midsize commercial van segment consists of a few truck-based vans from domestic makes and that's about it. Most commercial vans are small city options like the Ram ProMaster City Cargo, Nissan NV200 and Ford Transit Connect. Others are larger versions of the same that skip over the midsize segment and go straight to the large segment, like the standard Ram ProMaster, Ford Transit and Nissan NV2500.

Probably the nearest competitor to the Metris is the Chevrolet Express, which is a bit larger with a much larger engine, but is roughly the same in general terms. The Express is larger and less fuel efficient, with a body-on-frame design based on a truck. The Metris is none of those things. So which one is be better for you depends entirely on your needs.

Its unique design offering makes the 2018 Mercedes-Benz Metris compelling to the commercial buyer. It's neither full-sized nor small and it's not overpowered or uncomfortably truck based. Instead, it matches those who don't need towing but do need cavernous interior space for work or people hauling. Its standard sliding side doors and more comfortable on-road drive are also major selling points.

We think the 2018 Metris is one of the more overlooked commercial offerings, but it checks more boxes for many commercial buyers than might be expected.