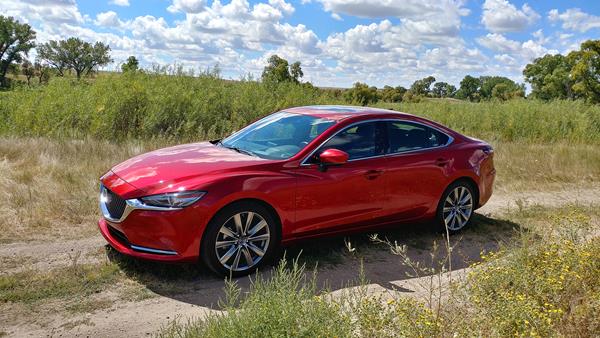 The 2018 Mazda6 has been redesigned for more refinement. The 6 was already a great sedan and one of the best-looking in the midsize segment, but now adds a much-improved interior and a new turbocharged engine choice as well. These changes are just highlights of several updates made to the Mazda6.

These updates build on the excellence the Mazda Mazda6 had already enjoyed, with its beautiful styling and mannered road presence. Like all Mazda models, the 6 is an engaging drive with good dynamics and a ready appeal. The Mazda6 is now quieter on the road, upgrading its appeal.

The 2018 Mazda Mazda6 is a midsize family sedan that comes in five trim levels. There are two engine options, varying according to trim level chosen. Front-wheel drive is the only drivetrain option. 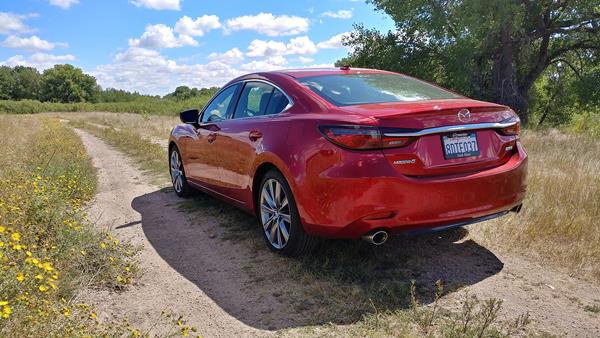 The 2018 Mazda6 is by far the prettiest midsize sedan on the road today. Revisions for this year bring a slightly more sophisticated look to the Mazda6's already compelling appearance. Those revisions center on the front fascia, which sees a slight change to the grille and the appearance of LED headlamps as standard.

The 2018 Mazda 6 sees its lip overhang from the hoodline deemphasized with the removal of some chrome and a lowering of the upper portion of the grille outline. This elongates the diamond-shaped grille itself, widening it for a more aggressive appearance. The headlamps are a bit thinner with a more peering look, adding to that change.

The overall design of the Mazda6 hasn't changed too much and it definitely didn't need to. Curvature around the front fenders, bulging slightly into the front doors below the side mirrors and countering the straight, upward-leaning line that runs along to the rear fender and tail lamps. The roofline is coupe-like with a fast pace that is near-mirrored by the hood's slight curve to the windscreen.

These elements play into the wheel arches, lower fascia scoop, and lack of lower body lines. The overall effect is one of sleek movement and promises of power. The 2018 Mazda Mazda6 is a simple, but very well-done design that's ageless in its appeal. 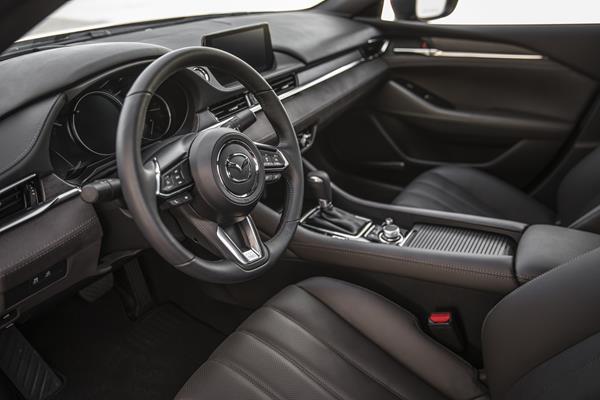 The 2018 Mazda 6 marks a complete revamp of the interior design for the sedan. The new interior for the 6 is much more upscale and premium than it was before. Most obvious to those familiar with last year's Mazda6 will be the lifted dashboard, the more roomy feel of the cabin, and the better materials used in its construction.

Front seating in the 2018 Mazda Mazda6 is very supportive and comfortably made. They have enough adjustment for most needs and the driver is treated to the ability to find a good position no matter his or her height.

The base seats in the Mazda6 are also well done with good amounts of room all around. The downside there are the doors, which are not as high for entry (due to the roof's slope). Once in, seating for two is comfortable with good headroom and legroom for the class, but three across is cramped and unwieldy in the Mazda6.

Trunk space in the 2018 Mazda6 is good at 14.8 cubic feet. It has a wide opening and the fold-down rear seats are standard, adding even more room.

Design elements in the Mazda6's new interior are more upscale than many might expect. Hard plastics are either gone from this new Mazda or have been textured to hide their nature. Mazda also put a lot of effort into dampening sound in the cabin to improve ride quality and that definitely pays off for the car. The 6 is now much more comfortable to ride in at length, with that noise dampening being a large part of that.

Mazda has replaced the outgoing model's smaller infotainment screen with a larger, 8-inch one that's much easier to see. A new, crisper graphics interface still works in a way similar to the older units, but delivers faster responses. The screen is a touchscreen while the car is parked, but is otherwise controlled with a command knob at the driver's right hand.

The Mazda infotainment system is relatively easy to learn for basic needs, such as radio tuning or Bluetooth-enabled phone calls. Most everything else will require some time to learn, however, and the curve can be steep. The majority of this learning curve is due to the often deeply-nested menus that populate the Mazda6's interface.

The 2018 Mazda6 has two engine options, with their primary difference being turbocharging. The base engine carries over from previous years, but sees some MPG boosting thanks to some performance tweaks and the addition of cylinder deactivation (automatic transmission-equipped models only). This base engine is EPA-rated at 26 mpg in the city and 35 mpg on the highway.

We have not driven the base engine in the 2018 Mazda6, but having driven it in previous years, we expect those fuel economy ratings to be roughly on par with the real world.

The turbocharged engine option adds more power, but like that power, fuel efficiency also depends upon gasoline grade used. Lower-grade gasoline will return lower power and economy than will higher grades. The numbers in the EPA estimates and our real-world testing are based on 91 octane fuel.

The EPA rates the turbocharged Mazda6 engine at 23 mpg in the city and 31 mpg on the highway. We saw slightly better than that highway number overall and averaged 27 mpg all told. We think most drivers will see better MPG ratings than the EPA's estimates most of the time.

The J.D. Power and Associates Vehicle Dependability Study rates the 2018 Mazda Mazda6 as "About Average." Those survey results indicate what consumers think of the vehicle. Historically, the Mazda6 has scored well in JDP surveys, so we expect that this initial survey of the new model will improve next year. There have been no recalls on the 2018 Mazda6 as of this writing.

The 2018 Mazda6 has received excellent crash test results by both of North America's major safety groups. The National Highway Traffic Safety Administration (NHTSA) has given the 2018 Mazda Mazda6 an overall top rating of 5 Stars for crashworthiness, with five stars each for frontal and side crash results and four stars for rollover.

The Insurance Institute for Highway Safety (IIHS) has given the 2018 Mazda6 top scores of "Good" on all crash tests conducted. The 2018 Mazda 6 is currently rated as a Top Safety Pick. 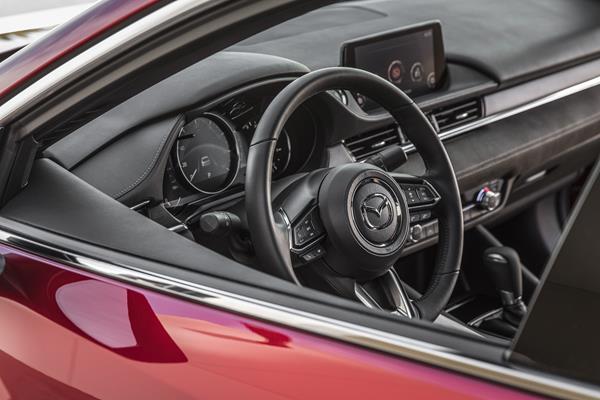 The 2018 Mazda Mazda6 stands at the most fun-to-drive non-luxury midsize sedan on the market today. It's engaging, fun, and has great responses to driver inputs. The base engine lacks power at higher speeds and tougher situations (hill climbing, under passenger load, on the freeway pass maneuver), but otherwise does well for the 6. The real happiness comes with the turbocharged option, though.

The base engine is a 2.5-liter four-cylinder that outputs 187 horsepower to a six-speed manual transmission (by default) or a six-speed automatic. It's a good daily drive engine and a nice fit for the Mazda6 in general terms.

The upgrade engine is that 2.5L turbocharged to deliver 227 to 250 horsepower, depending on the gasoline grade used. Higher octane fuel returns higher outputs. This is the engine that really makes the Mazda6 shine as a driver. It's fun, provides good acceleration most of the time, and always has enough power to deliver what's asked of it. An automatic transmission is the only option, but the six-speed auto is a pretty good match for this engine.

Out and about, the Mazda6 is maneuverable, handles well, and responds quickly. We like the way the car feels on the road. It's quiet cabin and large amounts of visibility for the driver make it easy to enjoy.

The 2018 Mazda Mazda6 has a good base price and even more compelling mid-level price point. Especially given its inclusions. Right now, sales of the 6 are slow, so dealerships are incentivized to give discounts and offer promotions. Most buyers are likely to find comfort in the Touring model with its better turbocharged engine, nicely-done interior package, and automatic transmission at about $25,700 before incentives or discounts. 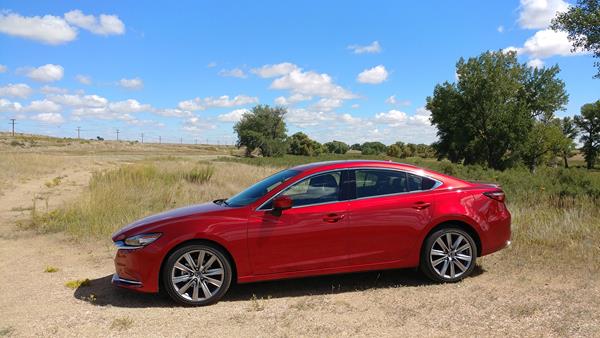 The chief competitors in the midsize sedan market are the Toyota Camry and the Honda Accord. Neither of these is as sporty or eye-catching as is the Mazda6, but both are better sellers for their excellent overall qualities of versatility and ergonomics. The Camry offers the best of everything and, though not as fun to drive as is the Mazda6, it's far more daily user-friendly. The Accord is similarly more convenient than is the Mazda.

Still, our eyes are on the 2018 Mazda Mazda6 as the top choice in the midsize sedan segment. If a larger back seat or more trunk space aren't your concerns, but daily driving and fun factor are, then the Mazda6 is definitely where you should be looking. It's the often-overlooked, underappreciated bit of excellence in the midsize segment that we think deserves a lot more attention.