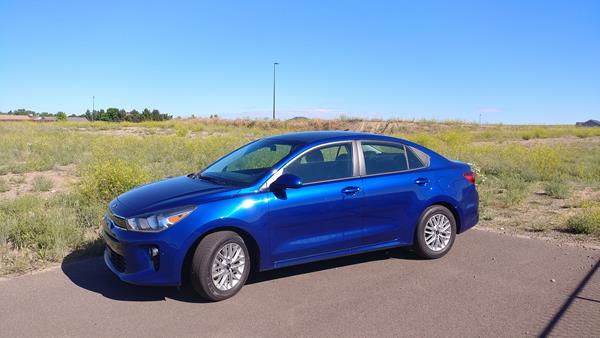 Kia completely redesigned the Rio for the 2018 model year and that work has paid off well. The 2018 Kia Rio is a far better car than it was before and is now one of the better offerings in the subcompact entry-level market.

With a price tag that stays under $19,000, even at its highest point, the Rio offers a great interior experience, one of the best on-road drive qualities you'll find in the segment, and a complete package of exceeded expectations.

One key change in the new Kia is its engine, which downgraded in peak power output but added a lower, longer power curve. This trade-off means the Rio doesn't look as good on paper, but on the road throttle responses and power delivery are smoother and more muscular. This makes the Kia feel more powerful than it really is, adding confidence and improving drivability immensely.

Also upgraded is the 2018 Rio's interior, which is much more upscale in feel and design than before. Good materials and smart use of space are key takeaways here. Add in better sound dampening, which improves the ride, and you'll find a really upscale car in the tiny-priced Kia Rio.

The 2018 Kia Rio is offered in both sedan and hatchback formats. Both have three trim levels, the LX, S and EX. A special Launch Edition package for the EX has limited availability for this model year. Our review is based on a week with the 2018 Kia Rio EX model. 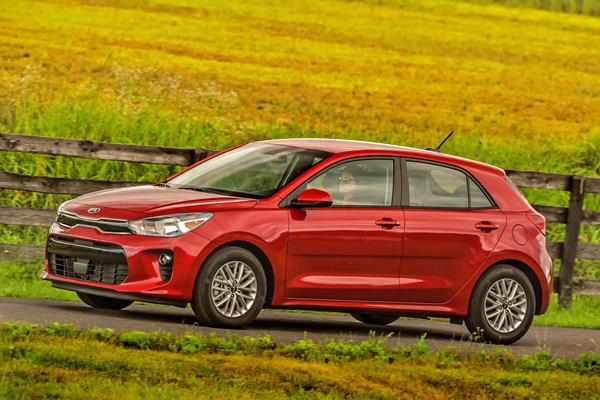 In the entry-level compact world, looks are generally not everything. Most of the time, they're not anything. Yet some designs stand out, and the 2018 Kia Rio has a fun style that is simple but interesting. Sort of like the rest of the car.

The Kia kidney grille is tempered on the Rio to be thinner with less emphasis. Headlamps to either side narrow to the grille and expand towards the fender in an upward eye-shaped swoop. Below the grille is a thin bumper division line and a large intake. This fascia gives the 2018 Rio a combination of bulbous eyes (via the headlamps) and sporty airflow (via the large intake).

The Rio's hood is short, but curved nicely to complement the raked windscreen and coupe-like roofline for the car. Side panels are simple without much adornment, and the wheels are pushed to the corners for maximum interior space and maneuverability.

The Rio comes in both a sedan and hatchback format, with the former having a short, clipped deck that creates a near-fastback appearance. The hatch has a more rounded rear with the roofline tapering to a fast cut for the bottom half of the hatch.

The 2018 Kia Rio is a good-looking little car, though it's price point demands that it not have much bling factor. It's likable and the hatchback has a nice styling that most will find attractive overall. 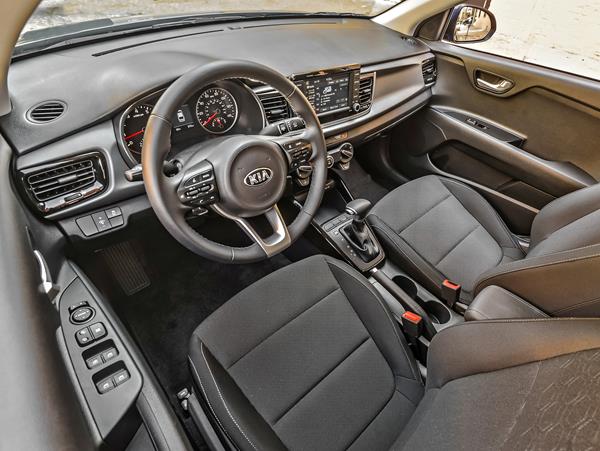 In the subcompact class, interior space and accouterments is usually toward the lower end. Not so in the Rio. Like many in this segment, the Rio's full redesign this year means that the interior is now far more upscale and likable.

Although there isn't anything singular about the Rio's cabin to take selfies with and post about, there are several key points that make it a cut above.

The first impression is that the 2018 Kia Rio has a more upmarket interior than most of its rivals. Which is accurate. Despite the Rio's tiny price tag, its interior is built from quality materials with good design elements. The cabin is roomier than expected of a compact, with better seat bolstering and design than is the norm.

Front seating is very accommodating with plenty of adjustability, even at the base end. Especially for the driver. Even tall folks will find plenty of space inside the Rio's front seats, including ample headroom for those over 6 feet. Driver's controls and their layout are also well done with an eye towards simplicity and ease of use. We're fans of the redundant hard buttons for many common items in the infotainment, letting you skip the menu system when desired.

The Rio's back seat is about what's expected in this class. A few rivals have roomier back seats with better entry and egress, but like most compact vehicles, the back seats in the Rio are more about kids than grownups. Both leg and knee room are at a premium in the 2018 Rio's rear seating and there is no adjustment. Getting in and out of those seats is also difficult in tight spaces, as the doors must swing wide to allow full access to the floor to step in. That's our most serious knock on the Kia Rio, but one that's tempered by the fact that many in the compact classes have similar issues.

The overall design of the 2018 Kia Rio's cabin is excellent and we give it high marks for its upscale feel and great use of space.

Buyers will note that the special Launch Edition for the Kia Rio EX adds red interior trim and partial leather accents to the Rio. It is otherwise identical to the EX model. 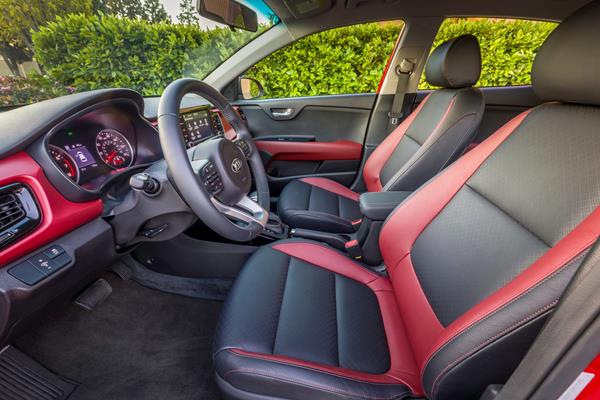 Definitely one of the best in the business, the Kia Uvo infotainment system comes standard with Bluetooth connectivity, a 5-inch screen and two USB ports up front. Upgrading to the higher EX trim level with its better infotainment adds a 7-inch display, Android Auto and Apple CarPlay, and two more USB ports in the rear seating. All Rio models with infotainment have voice control, but it's limited to common tasks like making/accepting voice calls, changing stations and so forth.

Where the infotainment really shines is in its adaptability. Once you've mastered voice controls, menus can be changed to become shorter and thus faster, as you won't require the prompts to give full information. The same can be done with the audio sources Mode button as well, which can be customized to show only sources that are available (attached) or that you specify.

Kia also got with the times in its entry-level market and decided not to offer navigation for the Rio. Instead, CarPlay and Auto are offered in the higher trim point where navi would be and can take its place. Good thinking on Kia's part. Adding hard buttons to quickly toggle Apple and Android tethering on and off is also nice, letting the driver or front passenger choose to plug in a phone and not activate either service. That saves the oft-delayed responses of phones being plugged in and activating, usually once the vehicle is underway and it's not really safe to be touching phone prompts.

Overall, Kia did a very good job with the Rio's infotainment.

Fuel economy in the 2018 Kia Rio is EPA-rated at 28 mpg in the city and 37 mpg on the highway. That's about average for the segment. In our week with the sedan model, we averaged 33 mpg overall, so the EPA numbers are likely to pan out for most drivers. 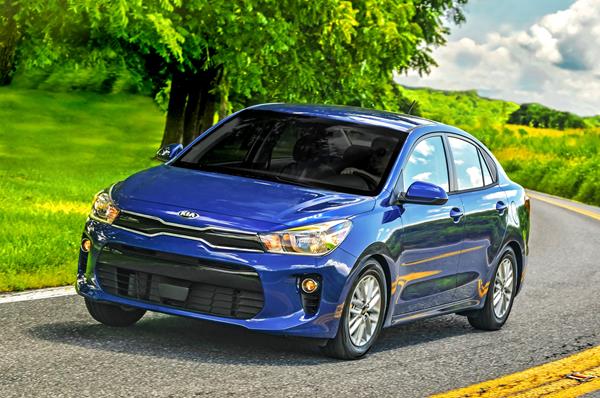 The 2018 Kia Rio is poised to be one of the most reliable cars in its segment. The Rio has received a "Better Than Most" rating from the J.D. Power and Associates Vehicle Dependability Study. That's backed by an industry-leading 5-year/60,000-mile bumper-to-bumper warranty and a 10-year/100,000-mile powertrain warranty from Kia.

So far there have been no crash test results published for the 2018 Kia Rio by either the National Highway Traffic Safety Administration (NHTSA) or the Insurance Institute for Highway Safety (IIHS). Kia has done well with most of its models in crash testing, leading us to believe that the new Rio will also do well. There have been no recalls for the 2018 Rio, as of this writing.

We are disappointed that some of the advanced safety features now offered in some rivals are not available for the Rio.

The 2018 Rio has surprisingly good performance for its price point. Compared to others in the segment, the Rio has better engine response, better road handling, and a better overall demeanor than most.

The Rio's engine is a 1.6-liter four-cylinder that outputs 130 horsepower. The base model comes with a six-speed manual transmission that can be upgraded to a like-geared automatic. The S and EX trims both have the automatic as standard.

Because the Rio is small, its small engine is more than enough for it in most situations. The Rio is surprisingly spritely, and has good pickup-and-go most of the time. Ride quality is firm, but not harsh. We like the positive steering and excellent road feel the 2018 Rio gives. Kia put effort into redesigning the chassis for better high-speed stability and better responses. Steering was likewise improved for better center-line feel. Both of these changes have paid off well for the Rio.

Most drivers will feel confident in the little Rio and will enjoy its peppiness. For the price paid, this is one of the better driving vehicles we've been in. It's unusually quiet highway presence, which is better than most in this class, is also a bonus.

The 2018 Kia Rio has a lower starting price than just about all of its rivals, especially when compared at the base level with an automatic transmission included (roughly $15,000). We recommend the S or EX models for their better list of equipment and higher livability.

Resale values in the subcompact segments are usually low, but the Kia Rio does have a good upfront price structure that will mitigate losses down the line. This is an excellent entry-level car or commuter vehicle and it's wonderfully done. We'd recommend the hatchback body for more versatility, but the sedan will do well too. 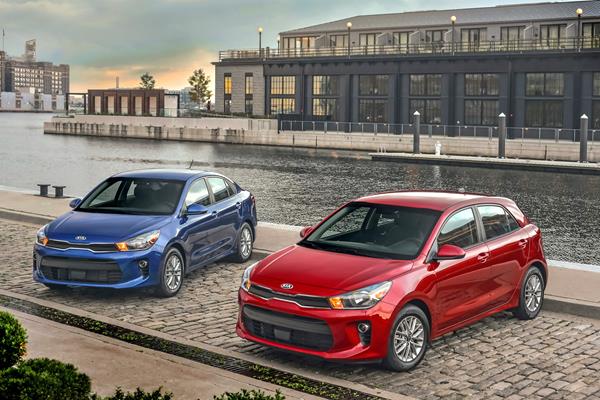 Without a doubt, the 2018 Kia Rio is one of the best in its class. Comparables include the Honda Fit, Chevrolet Sonic, Ford Fiesta, Toyota Yaris and best-selling Nissan Versa and Versa Note. The Honda adds more pep to the mix, but also comes with a higher price tag. The Sonic is well done but lacks the peppy drive and road quality of the Rio. The Fiesta offers less interior comfort at a similar price point, but has a more robust powertrain. The Yaris is far inferior on most fronts compared to the Kia. Likewise, the Versa sedan and Versa Note hatchbacks are also sub-par on all fronts.

The all-new 2018 Kia Rio is easily a best-in-class choice in our book. It ranks high because it's a very well-done subcompact that will not make the buyer feel cheap. The Rio is an excellent entry into the subcompact class and well worth shopping as the entry-level of choice.