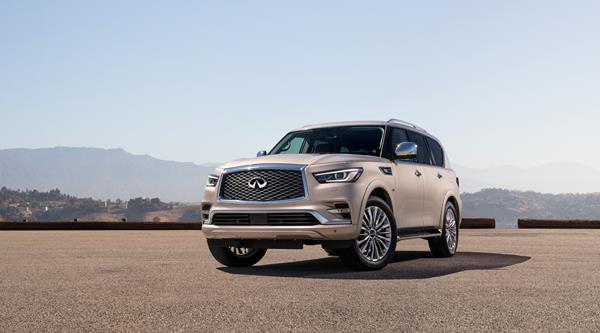 The 2018 Infiniti QX80 is a big sport utility that rides the line between luxuriousness and capability. One thing it doesn't do is pretend to be smaller or less bold than it is. This statement-making SUV is no weakling, and the updates made for 2018 bring it forward and make it a much more compelling choice.

For 2018 Infiniti gave the QX80 a much-needed design refresh. Changes both outside and inside are meant to improve its luxury standing while adding modern amenities that are becoming standard for the segment. Also added are a new optional rearview camera screen in the rearview mirror, a retuned suspension and restyled wheel options.

In the past, we've enjoyed the QX80 for its luxurious no-nonsense and strong demeanor, but noted its poor fuel economy and relatively small fuel tank which only exacerbates that. Those things still remain, but the overall package is greatly improved with the 2018 updates.

The 2018 Infiniti QX80 is a full-sized, seven- or eight-seat luxury SUV that comes in one trim level with multiple options packages. 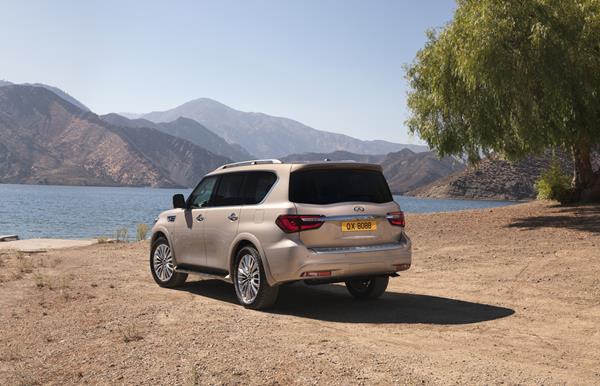 Infiniti made several changes to the QX80's exterior for the 2018 refresh. The front fascia has been softened, removing the overbite lip above the grille and drastically cutting back on bumper thickness to give the QX80 a more refined appearance. The changes also narrow the headlamps and widen the grille to flatten out the hood while keeping the fenders beefy. This lessens the intimidation factor of the QX80's look versus last year, while keeping the bulky appeal the SUV's always had.

Along the bodywork, the smooth sides remain intact with vague bone lines to hold a light curve and keep emphasis on the flat beltline and usable lower running boards. A flat roofline matches the belt, but the rear pillar's sinuous curve keeps the Infiniti design and blackened front and middle pillars give the forward floating roof a unique look.

The rear tailgate is much the same as before on first glance, but a closer look reveals that it's a bit flatter and less outwardly curved, creating a taller opening. The rear bumper is still big and robust but has a step-lip that's chromed to match the strip across the center of the tailgate above.

The two kit and roof rails on the 2018 QX80 are standard equipment, and several wheel options, ranging from 20 to 22 inches, are available.

The 2018 Infiniti QX80 has a luxurious, well-outfitted interior with lots of comfort items as standard. High quality materials and excellent workmanship are found throughout this luxury SUV, in which an atmosphere of comfortable opulence is created. We like the controls layout, huge amounts of space, and the excellent front- and middle-row seating.

Changes to the 2018 QX80's interior include a new center stack with added small item storage, the most notable of which is a cell phone storage pocket ahead of the shifter. 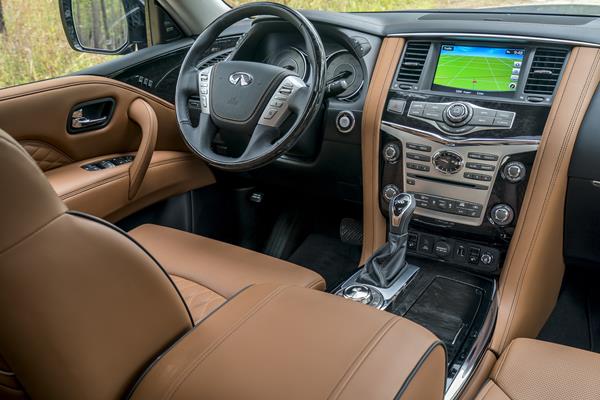 The first and second rows have very comfortable adjustable seating with lots of room for even big and tall passengers. We like the middle row's design and long-legged accommodation. Outboard seats are extremely comfortable for the class.

The third row is capable of seating adults, but is mainly aimed towards children and teenagers, with higher seat cushions and not as much legroom. It accommodates child safety seats very well and is easily accessed from the rear hatch for that purpose.

Cargo space inside the 2018 Infiniti QX80 is excellent, with 16.6 cubic feet available behind the third row and 49.6 cubic feet with that row folded. Folding both the third and second rows opens up a massive 95 cubic feet of cargo space that couple well with the wide, tall door opening now found on the QX80.

Infotainment in the 2018 Infiniti QX80 is very loaded at the base level, with upgrades adding only apps and in-car WiFi as an option. An 8-inch touchscreen is standard and, though its graphics quality and interface seem a little outdated, there's a lot of functionality and ease of use in its architecture. Bluetooth, voice control, satellite radio and navigation are all standard in the QX80. So is a 360-degree Surround View camera system.

Most of what's missing in the 2018 QX80 are upper-level tech and driver aid options like parking assistance, screen casting to the infotainment and the like.

A rear seat entertainment package is available for the 2018 Infiniti QX80. It adds two screens, one in each of the forward headrests, with wireless headphones and a DVD player. Plugs allow most entertainment items to be used with those screens, including gaming systems.

Definitely a weak point for the 2018 QX80, fuel economy is not the best in this huge rig. The gigantic SUV is thirsty, getting only 13 mpg in the city and 19 mpg on the highway. On paper, anyway. In real life, those estimates are a bit generous with real-world returns being closer to 14 mpg overall in our week with the big QX80.

There are no reliability ratings published for the 2018 Infiniti QX80 yet, but as the current version is mechanically almost identical to the 2017 model year, we can use those numbers to estimate expectations. Those numbers are good, with the J.D. Power and Associates Vehicle Dependability Study ranking the QX80 at "Better Than Most" in its consumer-driven reliability survey. Neither the 2017 nor 2018 model years of the QX80 have had any recalls. 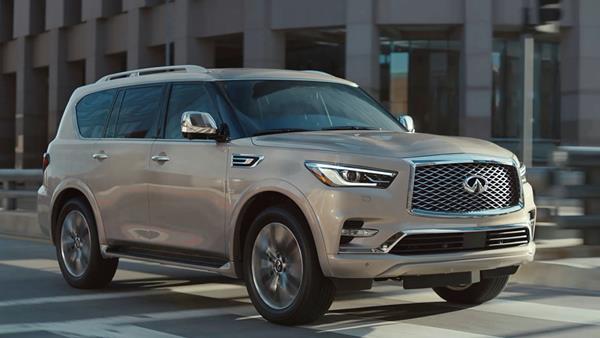 Because no crash test ratings have been published for either the 2017 or 2018 QX80 models, we must use the general track record and size advantage of the SUV as our guide for a safety rating. Although no National Highway Traffic Safety Administration or Insurance Institute for Highway Safety ratings are available, we feel the 2018 Infiniti QX80 will do well safety-wise. Standard safety equipment is plentiful in this luxury SUV.

Performance is definitely a strong suit for the 2018 QX80. A strong engine combines with excellent chassis control through the standard Hydraulic Body Motion Control System to make for a smooth, composed ride despite the QX80's excellent off-road credibility.

The 2018 QX80 is powered by a 5.6-liter V8 engine that outputs 400 horsepower. A seven-speed automatic transmission and rear-wheel drive are standard. Four-wheel drive is available. Acceleration in the 2018 Infiniti QX80 is impressive with smooth shifts from the transmission, which isn't afraid to downshift for more power output. Fuel economy be damned.

Off the road and in inclement weather, the QX80 does very well. It's a big, capable machine with a lot of horsepower to propel it through almost anything. The four-wheel drive system is well done and adds powerful torque when necessary. Yet the QX80 smooths out road bumps and limits roll through hard corners to provide an excellent, luxurious road drive.

Maneuverability in the 2018 QX80 is great for a vehicle this size, but the bulk of the SUV's massive presence still requires that physics takes a role in maneuvering. Visbility is very good and the included 360-degree cameras are a boon.

Towing in the 2018 Infiniti QX80 is rated at 8,500 pounds. A tow hitch, 7-pin wiring plug and trailer sway control are standard. 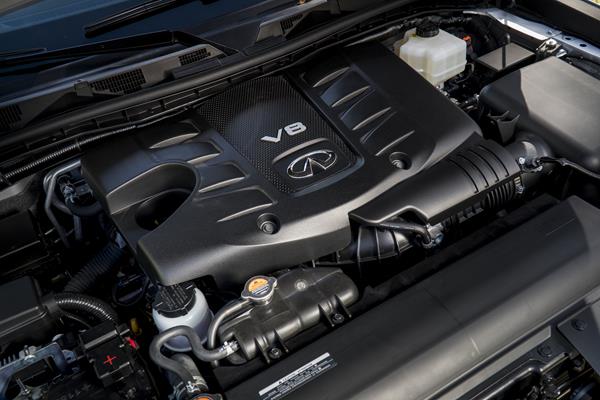 The base-level 2018 Infiniti QX80 is priced below the class average. In fact, it's well below most without losing the huge amount of accouterments normally associated with the big luxury SUV segment. This makes the QX80 a better buy right upfront than many competitors.

Most buyers will purchase in the $65,000 to $70,000 range, which includes 4WD and a lot of extras. We suggest weighing the need and desire for added amenities to the costs associated with them, as added upgrade packages can begin to really eat into your pocketbook.

That said, there are a lot of upsides and few downsides to getting a 2018 QX80 in your driveway. 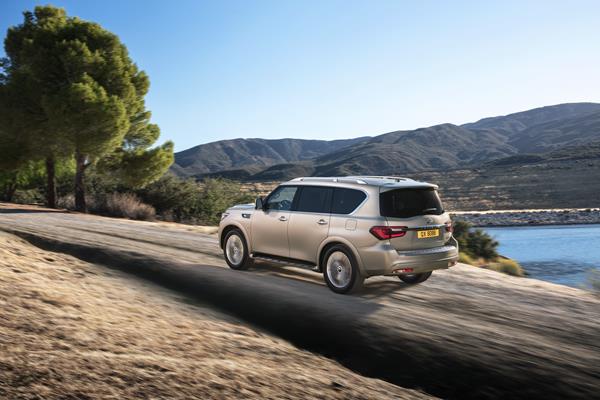 Plenty of full-sized luxury SUVs ply the market today, but only a few are as capable and well-rounded as is the 2018 Infiniti QX80. Close competitors are the Lexus LX 570, Cadillac Escalade and Lincoln Navigator.

The Lexus is the closest competitor to the QX80 in terms of capability, but falls short in its interior and general comfort. The Escalade is a bit smaller and less capable than the QX80, but has a lower price point. The Navigator is a solid choice for its fuel economy and capability, but isn't as refined as is the Infiniti.

The 2018 QX80 is a compelling choice in the luxury SUV market. Especially with its new exterior and smarter interior. Style has a lot to do with making a choice in this segment, and the QX80's new look is far less intimidating than it was previously.