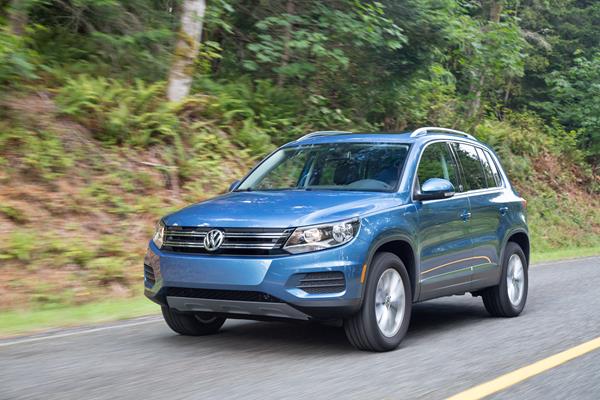 The 2017 Volkswagen Tiguan is the last of the current-generation Tiguan models before the all-new 2018 model takes over. Despite its age compared to most of the compact crossover competition, the 2017 Tiguan holds its own and is as desirable as ever.

Not much has changed for the Tiguan for 2017, but one key upgrade is with the crossover's infotainment. It's now top-shelf and worthy of heaps of praise. Its 6.3-inch touchscreen is standard equipment on all Tiguan models, as are Car-Net apps and satellite radio. Also changing are the dropped SE and R-Line trims, which are now called the Wolfsburg and Sport models instead.

The 2017 Tiguan sees the final year of this Tiguan generation going out in style.


What We Love About the 2017 Volkswagen Tiguan:


What We Don't Love About the 2017 Volkswagen Tiguan: 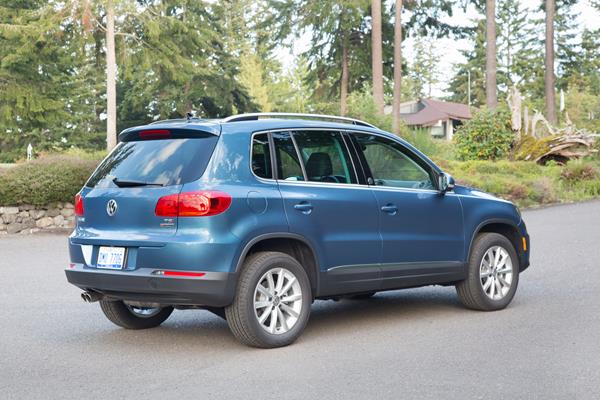 The 2017 Tiguan continues with the crossover's unique and sporty exterior design. The Tiguan has a car-like grille, under which a sharp approach angle that includes the lower intake makes for a more aggressive look. Understated fenders and a slightly sloping, but plain hood give the Tiguan a no-frills appeal that allows the larger greenhouse and big gaps between wheel and do well to keep the crossover looking like an SUV. The sporty roofline and curved rear hatch accent the rear wheels pushed up against the rear bumper complete the Tiguan's uniquely sport-enthused look.

Those elements give away the Tiguan's greatest strength, and the far-flung wheelbase of the 2017 Tiguan promises good maneuverability and sport handling. The looks is unusual, but not polarizing or odd.

When the Tiguan first appeared in this generation, its design was refreshing for the segment. Now it's been copied often, making the current 2017 Tiguan a little less of a standout.

The interior of the 2017 Volkswagen Tiguan is spartan compared with most of the newer contemporaries on the market. Its signature Teutonic feel, found in a lot of German vehicles, seems a bit sparse and stark when compared to more popular sellers from other makes. Monotone is a simple way to describe the design theme. 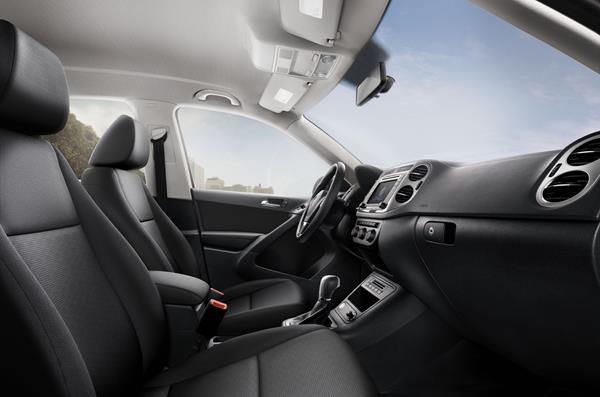 Materials quality and workmanship are very good, with the 2017 Tiguan having much appeal in that regard. Front seating is very comfortable and all seating positions benefit from a lot of headroom and plenty of shoulder space. Legroom up front is good, but a bit more cramped in the rear seats. The rear seats do slide and recline, which is unusual for this segment. Sliding those seats forward is one way to gain some extra cargo space when kids in safety seats don't need the legroom in front of their chair.

Cargo space is a sticking point in the 2017 Tiguan. About 23.8 cubic feet are available behind the back seats, which is about 10 cubic feet shy of the segment average. Folding down the rear seats (which do not fold completely flat) expands that cargo space to 56.1 cubes. These numbers are more on par with subcompact crossovers rather than the larger compact class that the Tiguan fits within.

The new Volkswagen infotainment system that is now standard in the 2017 Tiguan is excellent. It's one of the easiest to use that we've seen, and includes Apple CarPlay and Android Auto as standard.

Uniquely, the 2017 Tiguan allows two phones to be synched to it simultaneously via Bluetooth, allowing a lot of interesting interaction to happen including swappable song playing and the like. Either phone can access the hands-free talking system for phone calls as well, but if one is already using it, the other is blocked until the first phone disconnects.

The new infotainment is an excellent upgrade from VW and we're glad to see it. Functionality is largely controlled through the command knob at the center of the infotainment screen and menus are relatively straightforward and easy to navigate. 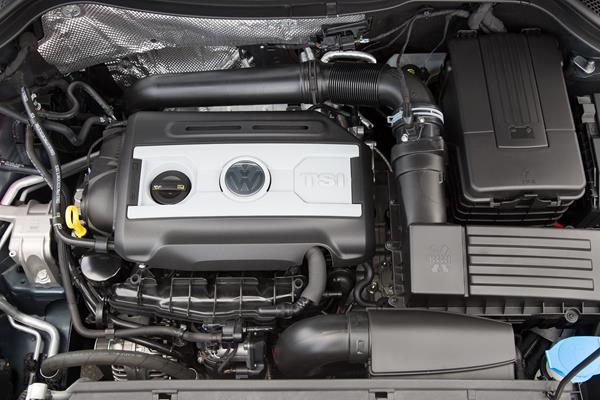 Fuel economy estimates for the 2017 Volkswagen Tiguan are not on par with competitive 4-cylinder crossovers in the compact segment. The EPA estimates that the Tiguan is good for 20 mpg in the city and 24 mpg on the highway, or 22 mpg overall. Those numbers are for both the front-wheel and all-wheel drive variants, though the AWD is rated at 21 mpg overall despite its having the same numbers otherwise.

The EPA's estimates and the real world are pretty close to one another with an AWD model we tested seeing about 20.5 mpg when all was said and done. We usually cut a little slack on MPG estimates due to our high 5,400-foot altitude.

The 2017 Tiguan has been rated as "Better Than Most" in the J.D. Power and Associates Vehicle Dependability Study. That combined with the model's excellent past performance in this generation and its only recall being for an airbag module give us confidence in the Tiguan's overall dependability.

The 2017 Volkswagen Tiguan has been rated by both the Insurance Institute for Highway Safety (IIHS) and the National Highway Traffic Safety Administration (NHTSA) for crash worthiness.

The IIHS gives the 2017 Tiguan a top score of "Good" on all but its small overlap front test, for which the crossover received a low score of "Marginal." The NHTSA rates the Tiguan as being four out of five stars overall for its crash test, with a score of three on frontal crashes, five on side crashes, and four on rollovers. 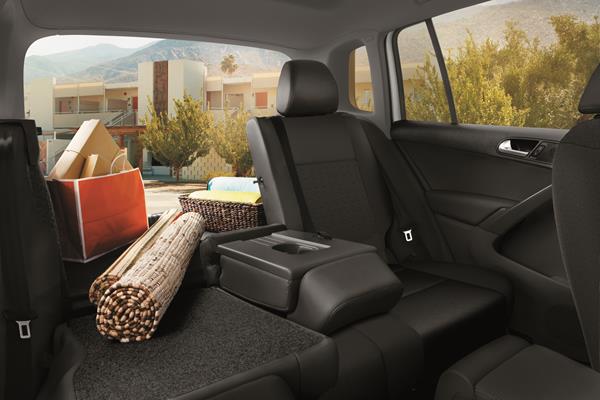 The 2017 Volkswagen Tiguan has one of the best drive dynamics you'll find in the compact crossover segments. The turbocharged 2.0-liter 4-cylinder engine produces 200 horsepower and 207 pound-feet of torque. That runs through a 6-speed automatic transmission with front-wheel drive as standard and all-wheel drive as an option. Most people can expect 0 to 60 mph times under 8 seconds, even on public roads.

We found the 2017 Tiguan to be one of the most fun vehicles we've driven outside of the sporting classes. That says a lot about the interest and fun factor this crossover SUV holds.

The 2017 Volkswagen Tiguan is higher priced than many competitors - at least at its base level - but offers more in terms of performance and interior quality when compared to base-level competitors. Most buyers fall in the mid-range for pricing, and there the Tiguan is more competitive.

Slow sales for the 2017 model year and soon-to-come incentives from dealerships eager to clear inventory to make way for the all-new 2018 Tiguan will mean a lot of cash on the hood for buyers looking between now and the new year.

Resale values for the Tiguan are about par for the segment, but the Tiguan is traded in less often than other vehicles, as it is often kept longer or sold on the used market where value is higher. 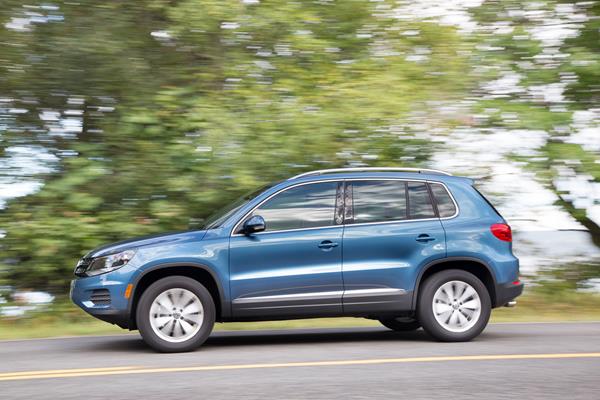 The fast-growing compact crossover segment is really heating up and there are a lot of choices to consider. The 2017 Volkswagen Tiguan is a slow-selling option compared to most others being offered.

Top sellers in the compact crossover segment are the Toyota RAV4, which is comparable to the Tiguan in most respects with the exception of its inferior drive dynamic by comparison - the VW definitely wins out there. The Mazda CX-5 has been newly redesigned and outperforms the Tiguan in almost every way. It also has the best interior we've seen in this segment thus far. Definitely worth comparing. Finally, the Honda CR-V is the segment's best-seller for a reason and has superior roominess and better fuel economy, along with a ride quality that's nearly as good for sportiness.

In the end, the value proposition and fun driving experience that the Tiguan offers are reasons to consider buying it. The 2017 Tiguan will be the last of this current generation of the crossover, and outside of some concerns over cargo and back seat room, this current Tiguan is a very dynamic little vehicle with no need for an upgrade.