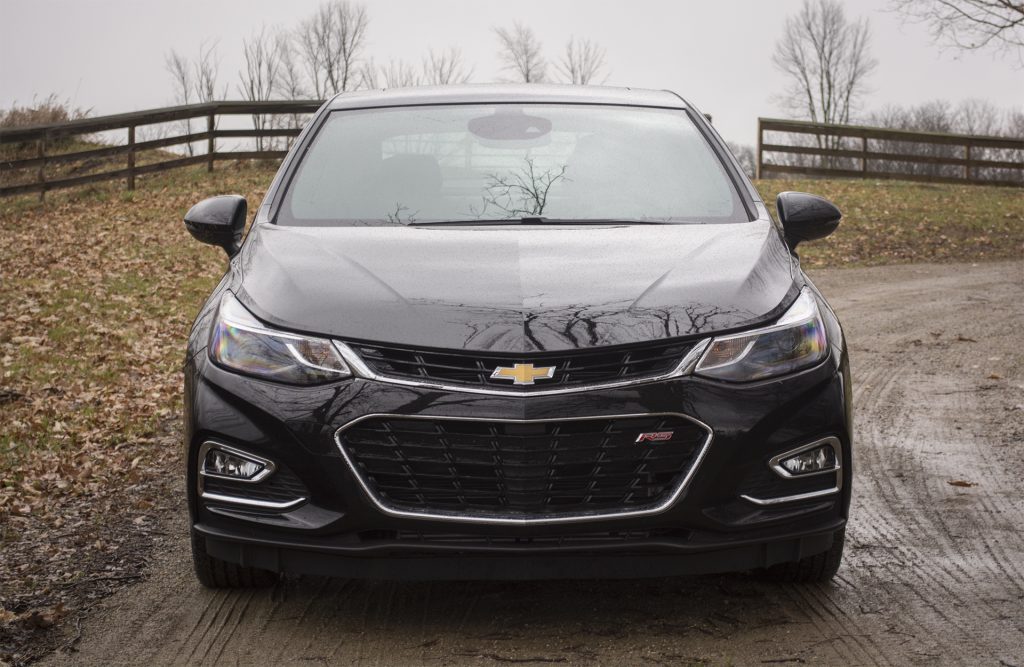 Chevrolet and small cars. Much like oil and water, the two never seemed to mesh. The Cavalier never really made any inroads and the Cobalt was a decent attempt, but its reputation has been torpedoed by the ignition switch recall. Chevrolet's recent attempt at a compact was the Cruze and it showed some promise. It might not have been the most exciting vehicle to look at or drive, but it proved that the bowtie brand was starting to understand the key fundamentals: decent fuel economy, a long list of standard features and a roomy back seat.

Last year Chevrolet started selling the second-generation Cruze. The new model takes the ideas that worked on the first-generation, along with a number of improvements to try and make it one of the best models in the class.


What We Love About the 2017 Chevrolet Cruze:


What We Don't Love About the 2017 Chevrolet Cruze: 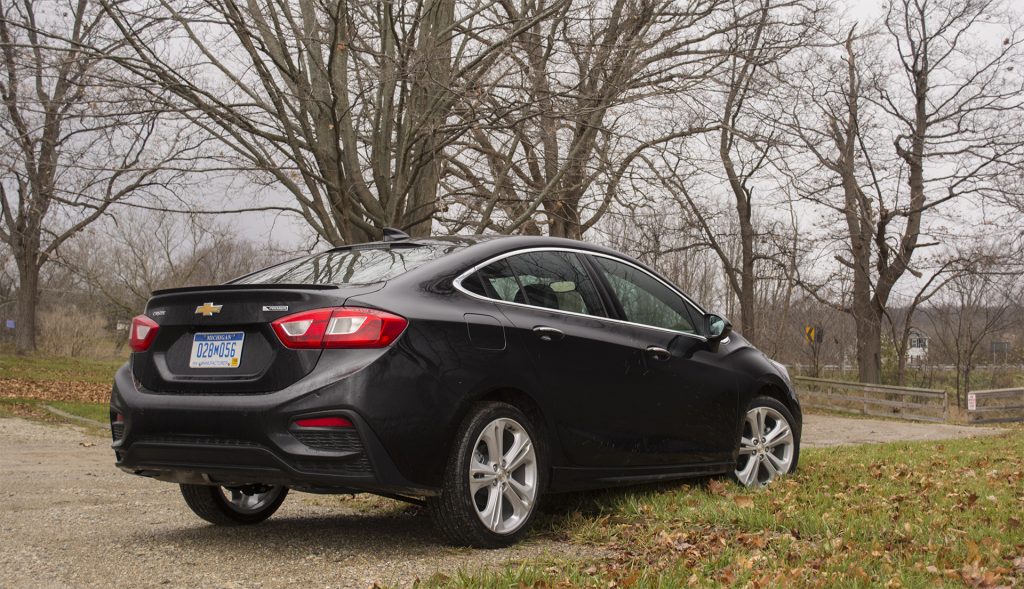 There is a rule when it comes to subcompact and compact vehicles: The hatchback looks much better than the sedan. This holds mostly true for the Chevrolet Cruze. Both the sedan and recently introduced hatchback have handsome front ends with dual grilles, narrow headlights with LED daytime running lights, and aggressive front bumpers. The side profile of the sedan reminds us of the Volt, with a similar greenhouse, flared front-wheel arches, and character line running along the door.

But where the sedan falls apart in terms of design is the back. The stubby rear end looks like an afterthought with no real design traits to set it apart. At least the Cruze Hatchback has a sharp looking tailgate and longer roofline to add some style. You can make the Cruze sedan look a bit more stylish by opting for the RS package. This adds a body kit, mesh grilles, 18-inch aluminum wheels, fog lamps and a rear spoiler. This package gives the Cruze a little attitude. 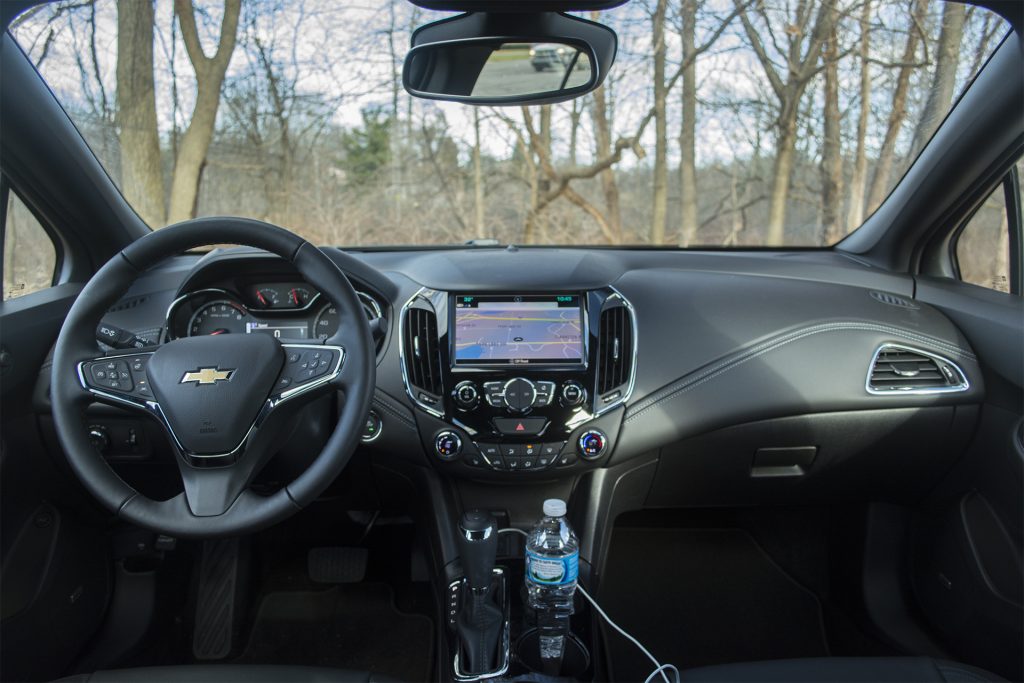 Chevrolet has put a lot of effort into making the Cruze's interior feel special and it shows. High-quality materials are paired with interesting design touches, such as a curving character line on the dashboard. Build quality is also quite high, with no rattles or obvious panel gaps in our tester.

In our Premier tester, the seats came upholstered in leather. The front seats provided an excellent level of comfort and support for long trips. Finding a position for the driver isn't hard thanks to 8-way power adjustments and a steering wheel that tilts and telescopes. It's a shame that the passenger is stuck with manual adjustments in the top-line model. Controls are within easy reach for both the driver and passenger. The simple layout of the climate control system and infotainment system makes it easy to find a specific function at a quick glance.

Passengers sitting in the back will have no complaints, as there is plenty of legroom for most passengers. Headroom is quite good as well if you don't opt for the sunroof. If you do, those over 6-feet will find their heads touching the headliner. One nice touch for those sitting in the back is the option of heated seats. In terms of cargo space, the Premier sedan is on the smaller end of space with 13.9 cubic feet. Opt for the base L or LS and space increases to 14.8 cubic feet. 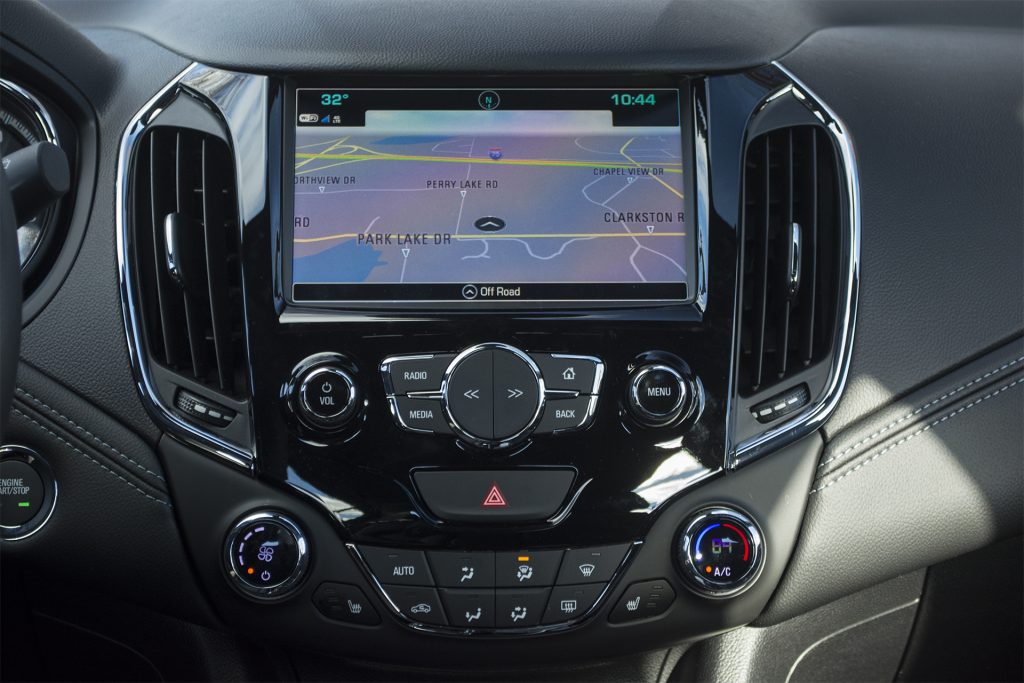 Chevrolet is using the technology card as a key selling point for the Cruze. All models come with a 7-inch screen with Chevrolet MyLink and compatibility with Android Auto and Apple CarPlay. OnStar with 4G LTE and Wi-Fi also comes standard across the board. Optional for the LT and Premier is a larger 8-inch screen with navigation.

We had the larger screen in our Cruze tester. MyLink has been improving in terms of performance and overall usability with every new Chevrolet model. Large touch points on the screen and redundant buttons underneath make it easy to use MyLink. Transitions between various audio sources or different functions were snappy, something that couldn't be said about MyLink before. Still, the navigation system does still some signs of slow down when zooming in and out.

We also tried the Apple CarPlay capability with MyLink and it is much better than previous GM vehicles. There were no issues of slowdown or apps crashing when we were using CarPlay. Having the system find our phone and bring up the CarPlay interface was much snappier.

EPA fuel economy figures of the 2017 Chevrolet Cruze Premier sedan stand at 29 City/39 Highway/33 Combined. Our average for the week was 31.7 mpg in mostly city driving. The Cruze L, LS and LT sedans are rated at 28/39/32 for the manual and 30/40/34 for the automatic. Hatchbacks see a slight decrease in fuel economy. 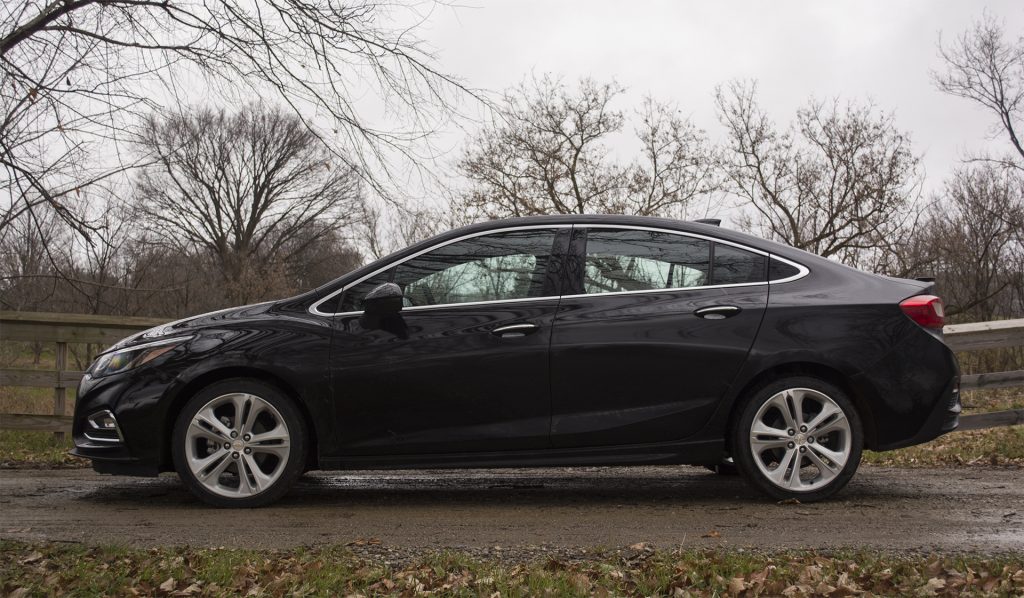 All Cruzes get a full complement of airbags, anti-lock brakes, stability control, traction control, OnStar telematics, and Chevrolet's Teen Driver system that allows you to set up a special key with parameters on speed, volume level and turning off the audio system if anyone isn't buckled up.

The LT and Premier can be optioned with the Driver Confidence package that adds blind spot monitoring with rear cross-traffic alert and rear parking sensors. A Driver Confidence II package that adds automatic high-beams, forward collision warning, lane departure warning, and lane departure intervention is only available on the Premier. It is disappointing that forward collision warning and lane departure warning isn't standard on the Premier, let alone be an option on the LT.

The Insurance Institute for Highway Safety has been the only group to test the Cruze. In the moderate overlap and side impact tests, the Cruze earned the group's highest honor of "Good." 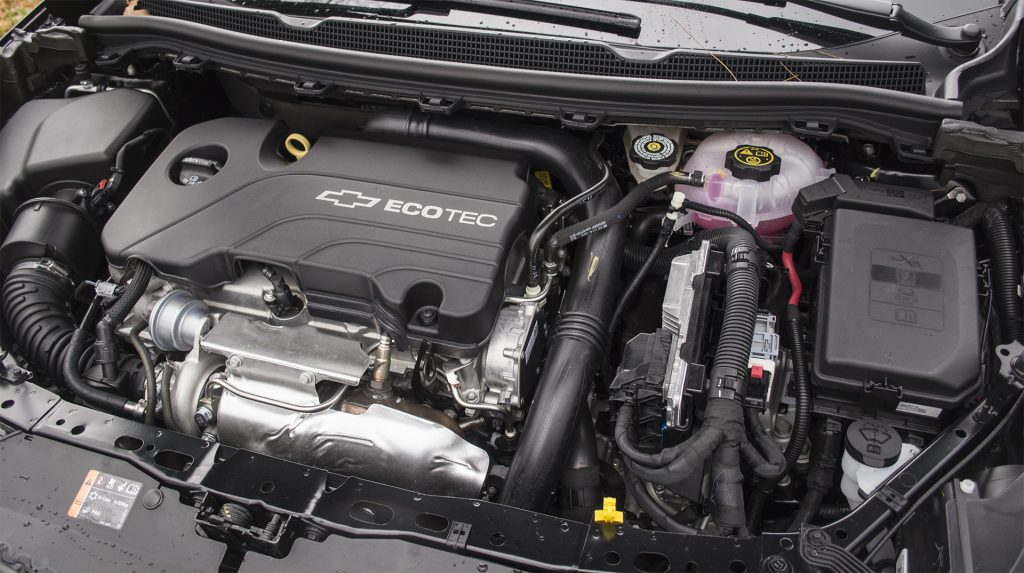 For the time being, the Cruze features a turbocharged 1.4L 4-cylinder with 153 horsepower and 177 pound-feet of torque. The Premier gets a 6-speed automatic as standard. The L, LS and LT get a 6-speed manual as standard. The LS and LT trims get the automatic as an option. For 2017, a diesel engine that promises even better fuel economy will be available for the Cruze sedan. The hatchback will get the diesel in the 2018 model year.

The Cruze will not knock the socks off anyone in terms of performance. Zero to 60 mph takes a hair over nine seconds. But you won't really notice the slowness in most instances because the engine has a lot of low-end grunt. It doesn't hurt that Chevrolet has dropped close to 300 pounds from the Cruze, allowing the engine not to work as hard.

A stop-start system is standard across all Cruze models. The system is quick to start the engine back up when you take your foot off the brake pedal. The downside is that you cannot turn this system off. The 6-speed automatic is tuned more for economy than performance, as it will be quick to shift to the highest gear to improve fuel mileage. It would be nice if the transmission was slightly quicker when it comes to downshifts.

It seems most compacts are trying to top one another by being the sportiest one of the bunch. The Cruze bucks this trend, feeling more like a big sedan with its suspension ironing out most bumps. An impressive feat when you consider that our tester was riding on 18-inch wheels. The big sedan impression continues as barely any road or wind noise comes inside. That isn't to say the Cruze doesn't feel composed when going around a corner. Body motions are kept in check. We only wish the steering was a bit sharper and heavier.

The 2017 Chevrolet Cruze begins at $17,480 for the L manual. If you want an automatic, be prepared to pony up $20,400 for the LS. Hatchback models kick off at $22,115 for the LT manual or $22,795 for the automatic. Our Premier tester came with a base price of $23,475. With most options being ticked, our as-tested price came to $29,195. The price may make you do a double take. But sadly, many compacts are heading in this direction. The Cruze Premier can justify some of the price with some of the features equipped, such as the additional safety equipment, sunroof and larger touchscreen.

For most people the Cruze LT is the model we would recommend because it provides everything you'll need, including cruise control, 6-speaker audio system, upgraded headlights with LED daytime running lights, and heated mirrors. We would also opt for the Convenience package that brings a power driver's seat, push-button start and heated front seats, along with the Driver Confidence package. You'll have a nicely equipped sedan or hatchback for just around $25,000. The 2017 Cruze LT and Premier models come with Chevrolet's 24/7 Promise. This brings 24 months/24 GB data plan for the OnStar 4G LTE, 24 months of OnStar's Guidance Plan, 24 months of SiriusXM satellite radio, two routine maintenance services, and roadside assistance for 5 years/60,000 miles. 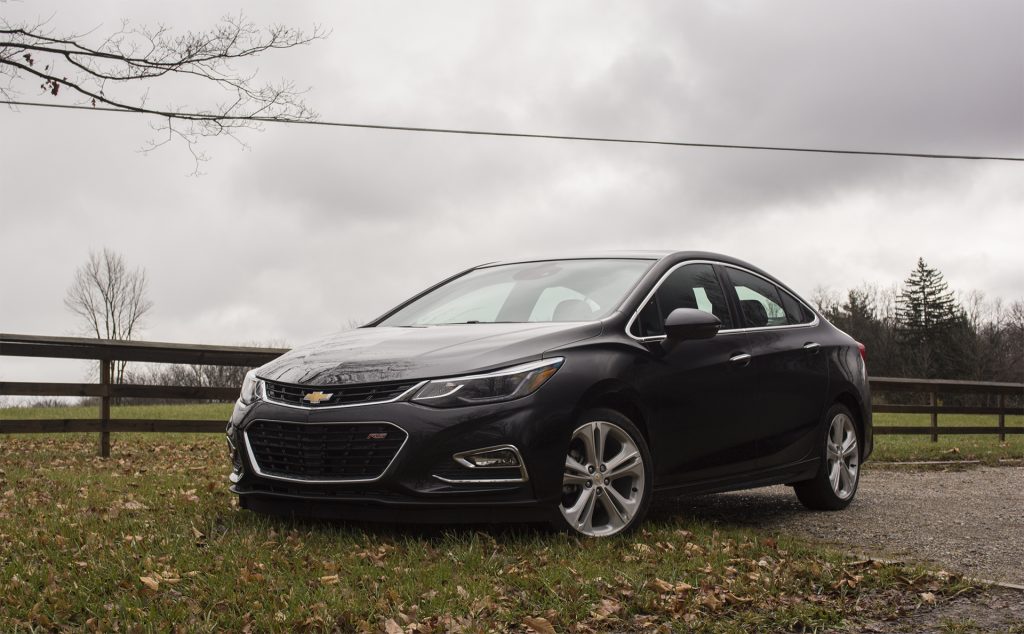 The Honda Civic is currently the model to beat in the compact class, as it offers sharp looks, spritely performance and sharp driving dynamics. The Mazda3 is still the benchmark when it comes to driving fun for a compact. The Hyundai Elantra and recently updated Kia Forte retain the best value in the class. Don't discount the Nissan Sentra if space is your primary concern.

The Chevrolet Cruze has a lot of good points going for it, such as fuel economy, a cushy ride and a lot of technology features. Yes, the exterior could use some work for the sedan and it isn't a sporty as some of its competitors. However, the Cruze is a well-balanced compact sedan or hatchback. It's worthy of being close to the top of your list.