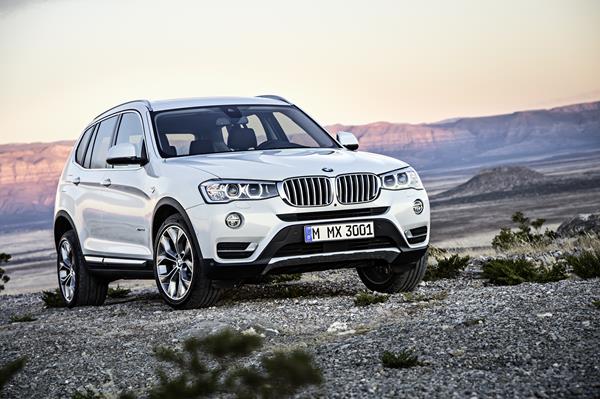 The 2017 BMW X3 is a compact luxury crossover that somehow stands out in a sea of competition. This segment is one of the fastest-growing in the US and the X3, despite having some age compared to its rivals, continues to set benchmarks that others strive to achieve.

The 2017 X3 is marked with a luxurious design, excellent and sporty handling, smart engine choices, and a thoroughly lovable nature. For 2017 a few changes were made to the popular crossover, starting with an update to the latest iDrive interface for infotainment, some option shuffling and standardization of amenities in many trims and packages.

Now seven years old in this generation, the 2017 BMW X3 remains spacious, fun to drive and practical, while keeping that signature BMW driver-centric appeal. As it's always been, the only Achilles heel for the X3 is in its price tag versus some competitors. Though an overview of the vehicle shows that the bang for the buck is definitely there, if your priorities are in line with the X3's offerings.

The 2017 BMW X3 is a five-passenger compact luxury SUV that comes in four trim levels, each with a different powertrain setup. Both front-wheel (sDrive) and all-wheel (xDrive) drive are available. 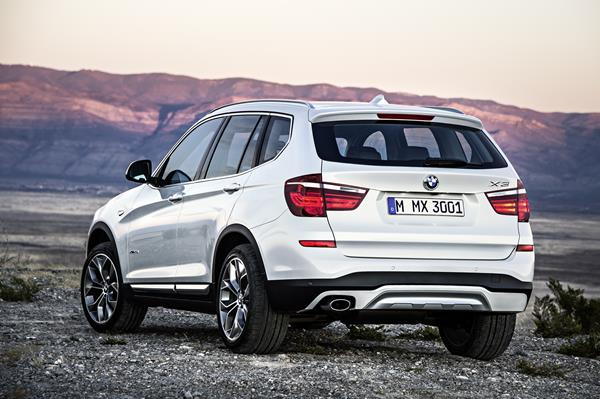 The 2017 BMW X3 is a smart-looking crossover with a lot of curb appeal. Its overall look is fast-paced and very BMW with a strong emphasis on forward movement in the design.

This begins with the signature Bimmer kidney grille that's flanked by long, thin headlamps that ride into the fenders. Below the grille is an intake that's bifurcated by a wedge of bumper to give the X3 a more robust look. More intake bezels flank that and tiny round fog lamps sit atop those.

The hood has smart lines, starting with one down the middle which is edged by two more rolling out in a curve to either side. These create a hood bump to give the impression of muscle under the hood and are themselves edged by two more straight lines that create the fenders' edges.

Behind each fender is a body line that runs the length of the 2017 X3, below the greenhouse, and moving slightly upwards for forward movement. Another runs along the bottom edge for running boards. The windscreen is moderately raked to give a taller roofline. The rear is a clipped hatch with a rounded bottom portion, below the glass, to create a speedier impression and allow for a heavier bumper to continue that robust emphasis.

The complete picture is of a strongly made, fast-paced little crossover that does its best to de-emphasize its small stature in the compact market. 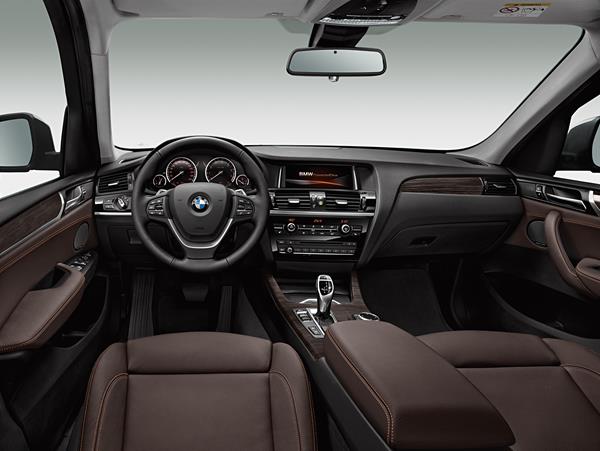 The 2017 BMW X3's interior is in line with the rest of the BMW lineup in terms of its excellent materials quality, high degree of workmanship, and simple but effective design elements. The traditional layout has its high points, including being immediately familiar to most drivers. Ergonomics are important and are centered on the driver, which the cant of the center stack and the tilt of the dashboard for better instrument viewing will attest.

Seating in the 2017 X3 is excellent with a lot of adjustability and plenty of room. Even in the back seats, which are more than generous by compact SUV standards. This makes the X3 one of the more family friendly crossovers in the luxury compact segment. Entry and egress are good with wide doors and a tall roof, but the door sills are a bit high in the rear and tend to catch feet.

Those larger back seats did not mean skimping in the cargo area, as the room behind those seats is at 27.6 cubic feet and expands to 63.3 with those seats folded. This is one of the largest cargo spaces in the segment.

There is good storage for various gadgets and gear, with some package additions giving as many as four USB ports for plugging in and charging. The standard base level has two. 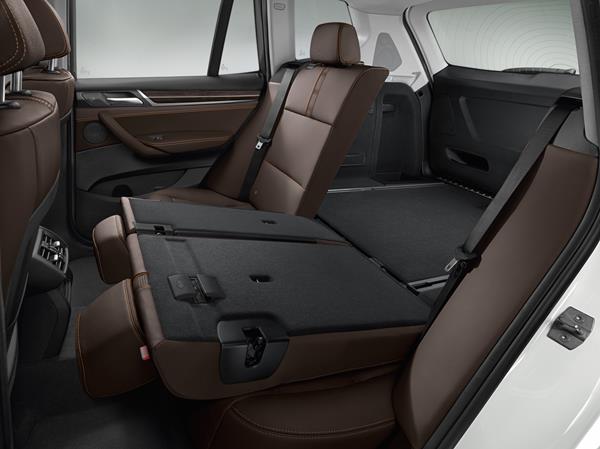 The controller with the upgrade comes with a touchpad on top for entering information by drawing with a finger. Menus are straightforward and move quickly. Output is crisp and easy to use. The upgrade to the better infotainment (via the Technology package) also adds a nicely done head-up display for the driver, and a more robust and useful driver information display in the instrument cluster. Both are well worth having.

Fuel economy in the 2017 X3 is good, but not excellent. The upside is that the published MPG numbers are real-life doable. That's thanks to the preponderance of turbochargers in the BMW lineup.

The 2017 BMW X3 has a base four-cylinder engine in the sDrive28i/xDrive28i that is EPA-rated at 24 mpg combined, with 21 mpg in the city and 28 mpg on the highway. Those numbers hold for both the front-wheel and all-wheel drive models.

The upgraded four-cylinder diesel in the xDrive28d is rated at 30 mpg combined, with 27 mpg in the city and 34 mpg on the highway.

The xDrive35i inline-six model is EPA-rated at 21 mpg combined, 19 in the city and 26 highway. That's one of the best mpg returns for a turbocharged six-cylinder you'll find in this market. 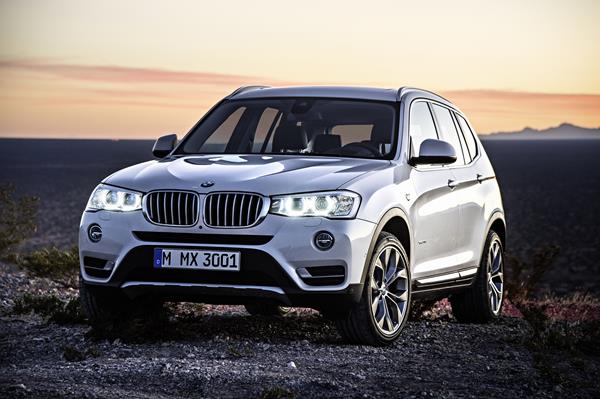 The 2017 BMW X3 receives good reliability scores with J.D. Power and Associates giving it a "Better Than Most" rating in its Vehicle Dependability Study. The X3 has two safety recalls as of this writing - one of which is for the power steering system, a mechanical concern.

The 2017 X3 receives top safety ratings from both the National Highway Traffic Safety Administration (NHTSA) and the Insurance Institute for Highway Safety (IIHS). The NHTSA gives the 2017 BMW X3 a 5-Star overall rating (out of five), with five stars for both frontal and side crash results and four for rollover results.

The IIHS gives the 2017 X3 top scores of "Good" for all crash tests performed, as well as a "Superior" rating for its front crash prevention systems.

The 2017 BMW X3 has three engine variants. The X3 sDrive28i (front-wheel drive) and the X3 xDrive28i (all-wheel drive) are powered by a 2.0-liter turbocharged four-cylinder engine that outputs 240 horsepower and 260 pound-feet of torque. Those are more than respectable outputs for the compact class and mean that the 28i models are capable of 6.5-second 0-60 mph times in most drivers' hands.

As the name suggests, the 2017 BMW X3 xDrive28d is available only in AWD. A 2.0L turbocharged four-cylinder diesel engine powers this version of the X3 with 180 horses and 280 lb-ft of torque. Zero to 60 times in this model are slower, at about 8 seconds, but are typical for a diesel-powered compact. Fuel economy is good, especially on the highway.

The X3 xDrive35i is also AWD-only and is powered by a muscular 3.0-liter turbocharged inline-six-cylinder engine that produces 300 hp and 300 lb-ft of torque. A 6-second 0-60 mph time greets drivers of this muscular little compact, making it one of the fastest in the segment. Its fuel economy is nevertheless one of the best amongst its peers.

The overall drive dynamic of the 2017 BMW X3 is wonderful and very well done. The expected BMW handling and power delivery are there, but the interior remains quiet and comfortable throughout. Unless the engine is pressed and the corner is hard. Which is what we'd expect from a BMW.

The 2017 X3 is expensive compared to similarly equipped rivals, but many will likely find the extra cost worth it once the drive dynamic, fuel economy and family friendliness of the X3 is tallied into the mix. With the 2018 model coming as a full redesign for the X3, expect prices for the 2017 model year to drop significantly as dealers clear their lots.

Resale on the BMW X3 is about average for the segment, which means steep losses in the first couple of years from purchase and then a retention of value thereafter. We recommend looking into the middle-tier models with a couple of package add-ons, depending on your preference, to boost value over and above the base model and its FWD platform. The xDrive28i with some technology upgrades or the diesel option are good buys with decent resale retention. 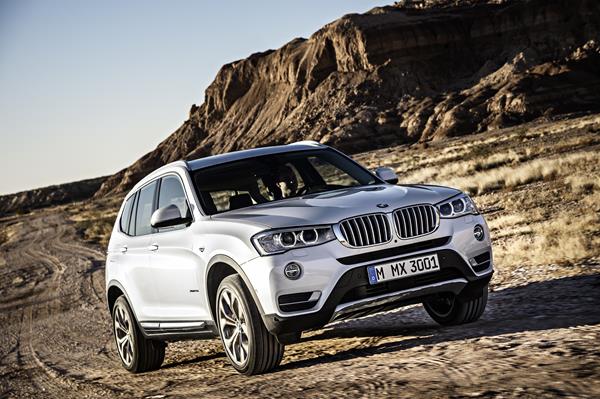 Most of the competition in the luxury compact crossover arena are newer in design than the BMW X3. Yet that doesn't mean they're necessarily better. The most impressive of the competition is the Jaguar F-PACE, which brings similar fuel economy and drive dynamic to the table. The Mercedes-Benz GLC-Class brings solid German competition, but isn't as refined as the X3 is on the road. Similarly, the Porsche Macan is sportier and more fun to drive, but not as family friendly or frugal. The stiffest competition comes from the well-priced and nicely executed Acura RDX, and the very family conscious Volvo XC60.

Against the competition, the 2017 BMW X3 is still an excellent choice with plenty to offer and few downsides. This five-passenger crossover is roomy, well mannered and fun to drive. Luxury is not lost in the process, making it a favorite in the luxury compact crossover segment.