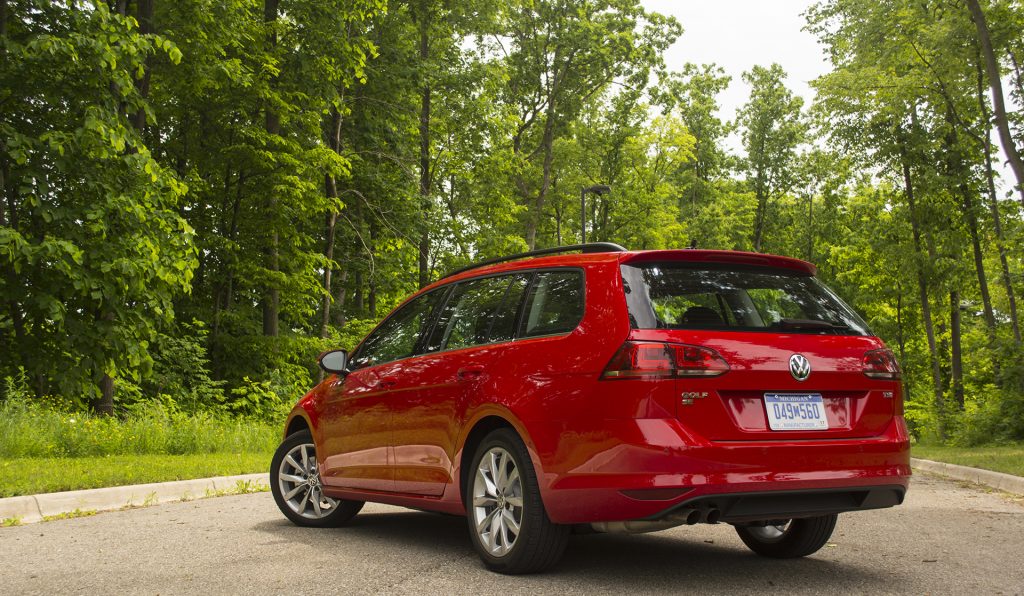 Despite the growing popularity of crossovers, not everyone wants one. There are varying reasons for this ranging from not offering enough space and fuel economy, to not wanting to follow the masses. But finding an alternative to crossovers is quite hard. The closest alternative to them is the station wagon. But they are a rare species in the market as buyers want the high ride-height and designs of crossovers. Automakers have responded in kind by passing on the wagon and cranking out more crossovers.

If you wanted a station wagon, you needed to shell out the big bucks for one built by a luxury brand. But in the early 2000s, Volkswagen launched the Jetta SportWagen. Taking their compact sedan, Volkswagen added some much-needed practicality to their model by extending the overall length and roof. This variant proved to be a success for the company and would continue to build it for the U.S. In 2014, Volkswagen announced the Jetta SportWagen would move over to the Golf family. This was because the new model didn't share anything with the U.S. Spec Jetta. Despite the name change, the Golf SportWagen offers an alternative to following the Joneses with crossovers.

What We Love About the 2016 Volkswagen Golf SportWagen

Amount of space on offer for cargo and passengers

Quite fun to drive

What We Didn't Love About the 2016 Volkswagen Golf SportWagen

DSG doesn't know how to act at low speeds 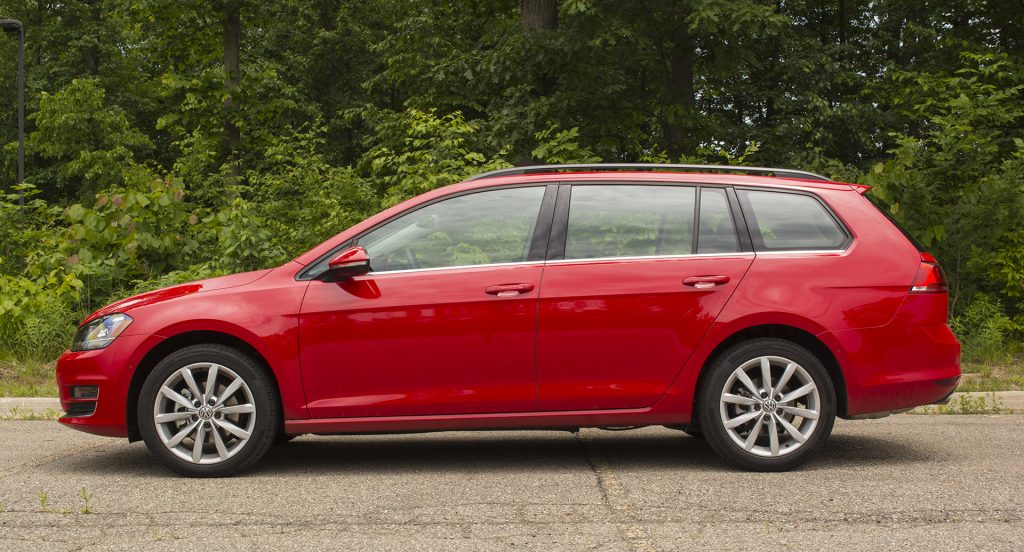 Take a Volkswagen Golf and add a few inches to its length, and voila. That is the best way to describe the difference between the standard Golf and the Golf SportWagen in terms of design. Park a SportWagen next to a Golf and you'll see the wagon is about 12.1 inches longer.

Aside from this, the Golf SportWagen features the same clean, if somewhat boring design. The front end features a narrow grille and a set LED daytime running lights. The side profile is standard Golf with a high roofline and no fancy design tricks. Wheels range from 15 to 18-inches. One thing to keep in mind is the color choice. Certain colors look fantastic on the SportWagen, while others make it look somewhat awkward. The red color on our tester causes it to fall into the latter category. 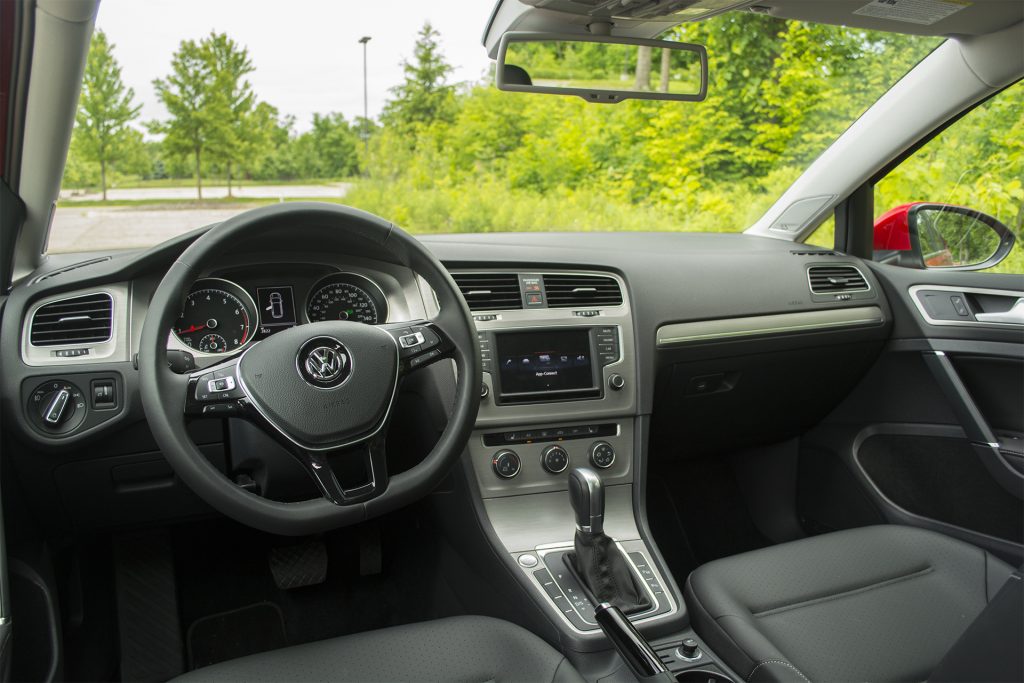 Like the exterior, the Golf SportWagen's interior isn't much to look at. Black and silver colors dominate the interior, and the dash doesn't have any design flair. On the upside, Volkswagen's material choices are the top of the class with soft-touch materials on various parts of the dash. Also, the simple dash design means controls are in logical places and within easy reach of driver and passenger.

The SE trim features leatherette upholstery and a power adjustment for the angle of the front seats. Anyone will be able to find a comfortable driving position quickly. Comfort-wise, the seats provide the right amount of support for long trips without feeling fatigued. The back seat has plenty of head and legroom for most passengers, This is quite impressive when you consider the SE comes with a panoramic sunroof as standard. 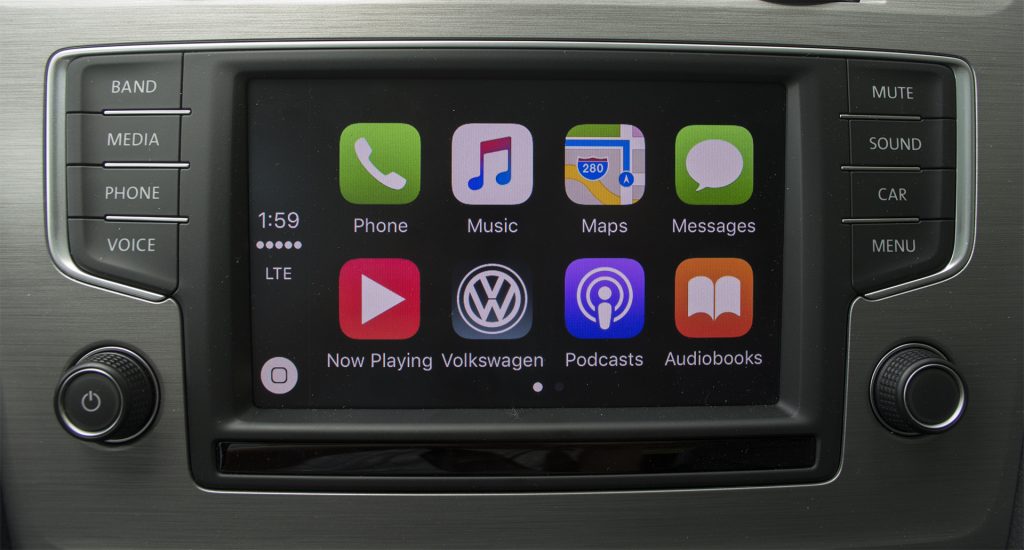 The technology story in the Golf SportWagen begins in the instrument cluster. A small screen between the speedometer and tachometer provides the driver key information such as trip computer data, compass, what is being played on the radio, and much more. This screen is also where a driver will be able to turn on and off the various active safety features such as lane departure warning if equipped.

All Golf SportWagens get a 6.5-inch touchscreen with Volkswagen's Car-Net infotainment system. This system is very easy to use with large touch points on the screen, buttons around the screen to take you to various parts of the system, and blazing fast performance. The only downside is the matte finish for the screen as it makes the system look somewhat dull. For 2016, Volkswagen has added Apple CarPlay and Android Auto capability through Car-Net's App-Connect. Compared to some vehicles we have recently driven with Apple CarPlay integration, Volkswagen's App-Connect works very well. The system was able to recognize our iPhone within seconds of plugging it in and showed no performance issues.

A couple other key items of note in the Golf SportWagen: First, Volkswagen has dropped the proprietary MDI media connector for a standard USB input. No more fussing around with making sure you have the right adapter for your various devices. Second, the Fender audio system that comes standard on the SE and SEL trims has to be one of the best sounding systems on offer from volume brands. No matter what we played through the system, the sound came out sounding rich and clear.

The Golf SportWagen equipped with a turbocharged 1.8L four-cylinder and six-speed DSG transmission is rated by the EPA at 25 City/36 Highway/29 Combined. Our week of mixed driving produced an average of 28 MPG.

At the time of this writing, data on the Golf SportWagen's reliability is still being gathered by the groups who monitor this. But we wouldn't be surprised if the Golf SportWagen is about average. What do we base this on? J.D. Power and Consumer Reports say Volkswagen as a brand has average reliability. 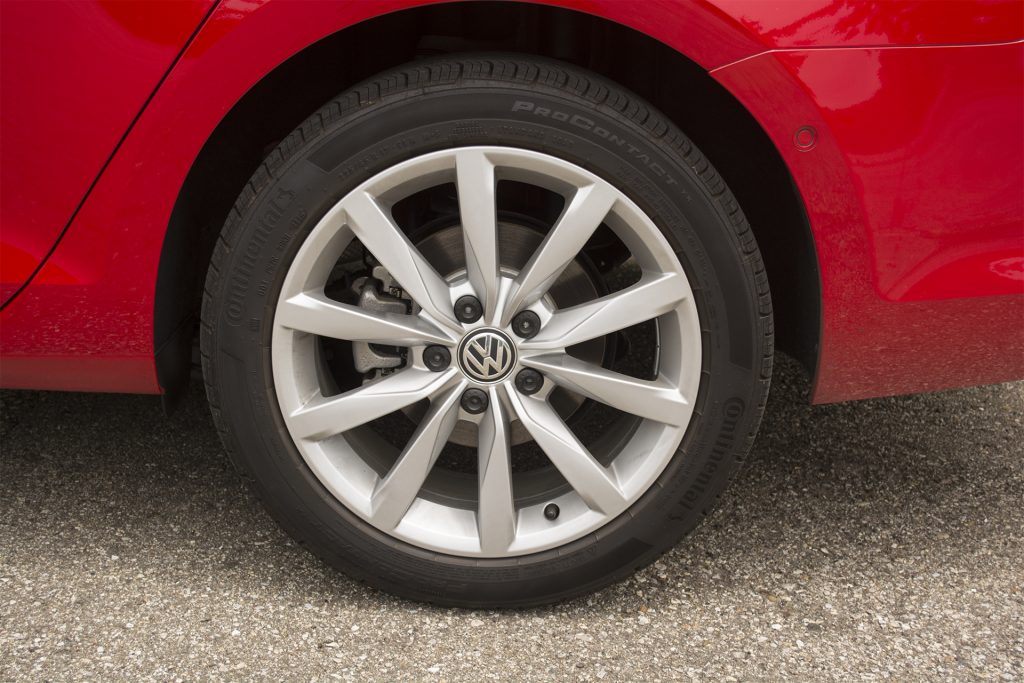 The Golf SportWagen has earned high marks from both the National Highway Traffic Safety Administration an overall score of five stars. The Insurance Institute for Highway Safety hasn't tested the SportWagen at the time of this writing. But it has awarded the standard Golf their highest award, Top Safety Pick+.

In terms of safety equipment, all models feature a number of airbags, anti-lock brakes, stability control, traction control, tire pressure monitoring, and a backup camera. SE models and above get Volkswagen's Car-Net telematics system. This system can notify emergency services in you're involved in an accident, locate the vehicle if it is stolen, and call for roadside assistance.

SE and SEL models can be fitted with a Driver Assistance Package that features adaptive cruise control, autonomous emergency braking, blind spot monitoring, forward collision warning, lane departure warning, rear cross-traffic alert, and park distance control with parking steering assist. For only an additional $1,495, it is something you should highly consider. 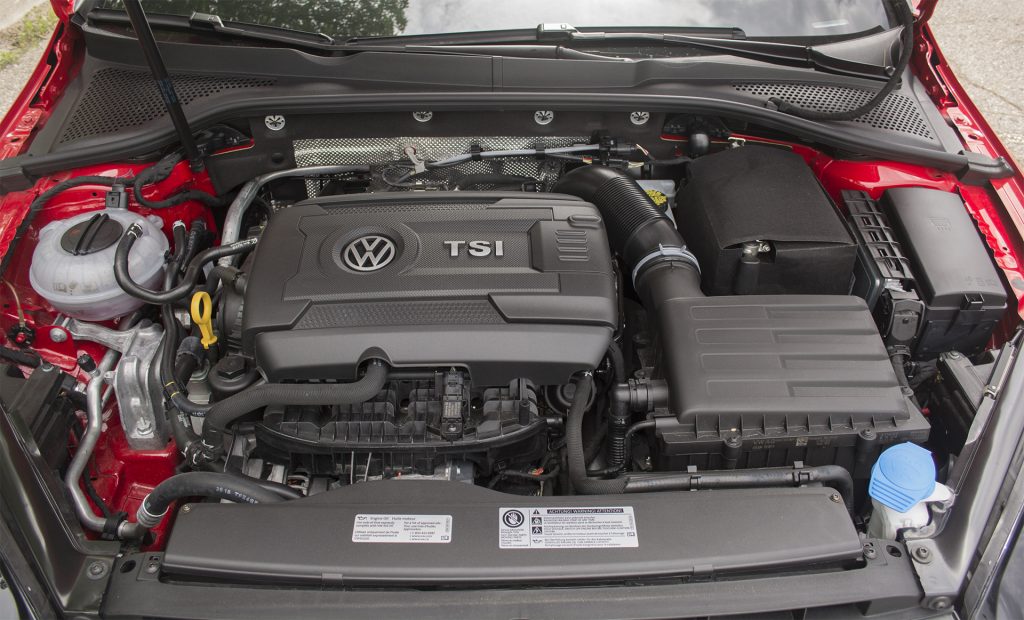 All Golf SportWagens, for the time being, feature a turbocharged 1.8L four-cylinder with 170 horsepower and 199 pound-feet of torque. The optional 2.0L TDI four-cylinder is currently not being sold due to it being involved in Volkswagen's emission cheating scandal. The base S comes standard with a five-speed manual. SE and SEL models get a six-speed DSG dual-clutch transmission as standard, while the S gets it as an option.

Despite the modest power figures, you never feel that you want more power. With torque arriving at a low 1,600 rpm, the Golf SportWagen moves with authority from a stop. If you need to a make a pass or merge onto a freeway, you just need to step on the accelerator and the engine responds with a surge of power. The only weak point of the powertrain is the DSG. At low speeds, the transmission is lethargic and confused as to what it should do. Once up to speed, the DSG is quite fast with up and downshifts.

The Golf SportWagen's suspension has a nice balance between comfort and agility. Driving over potholed and bumpy payment, the Golf SportWagen provides a controlled and smooth ride. Down a curvy road, the SportWagen doesn't reveal any body lean and flows through corners like you would expect from a European vehicle. The steering provides decent weight and feel. Road and wind noise are kept to acceptable levels.

The 2016 Golf SportWagen starts at $21,625 for the base S equipped with the manual and climbs to $29,385 for the top-line SEL. Our SE tester came with a base price of $27,025. For that price, you're getting 17-inch alloy wheels, leatherette upholstery, heated front seats, Fender audio system, panoramic sunroof, and keyless entry with push-button start. Equipped with the optional Driver Assistance Package and Lighting Package - adds bi-xenon headlights, LED daytime running lights, and the ability of the lights to change direction when turning - brings the as-tested price to $30,335. For most people, the SE with Driver Assistance Package is the model we would recommend. 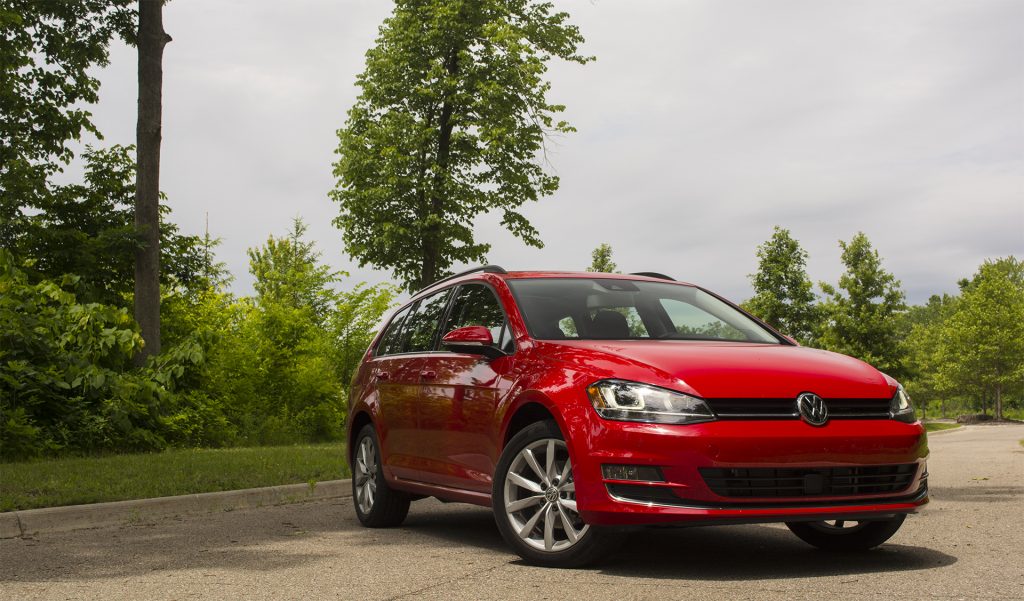 The closest competitor to the Golf SportWagen is the larger Subaru Outback. Having a slightly more expensive base price tag than the Golf SportWagen, the Outback offers more space for passengers and cargo. Also, the Outback comes with all-wheel drive that allows it to go places you wouldn't ever dare take the Golf. But the Golf is the better driving car and delivers slightly better fuel economy figures. You also have a wide selection of crossovers that offer a higher ride height and comparable cargo space. But again, the Golf SportWagen delivers better fuel economy and is a pleasure to drive.

While crossovers continue their domination, it is nice to see someone like Volkswagen giving those an option in the form of the Golf SportWagen who don't want a crossover. Not everyone wants to follow the leader when they need something a bit more practical than a sedan. The SportWagen offers this and a bit of fun to boot. That's a win-win in our books.