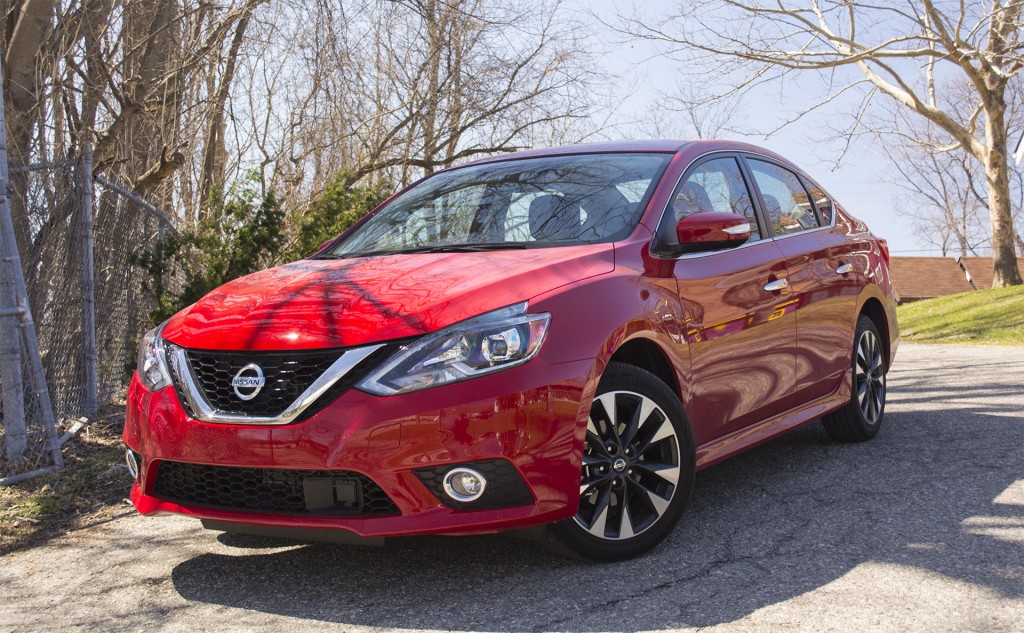 When Nissan launched the refreshed 2016 Sentra last year at the LA Auto Show, the company claimed this would be the year of the sedan. It was true as Nissan had introduced a fully redesigned Maxima and an updated Altima. But the Maxima was the only one to have some pizzazz and excitement. The Altima and Sentra were just somewhat plain. But maybe we are being a bit harsh on these models. There could be something we're not seeing. In the case of the Sentra, there is more to it than what the eye sees.


What We Love About the 2016 Nissan Sentra


What We Didn't Love About the 2016 Nissan Sentra 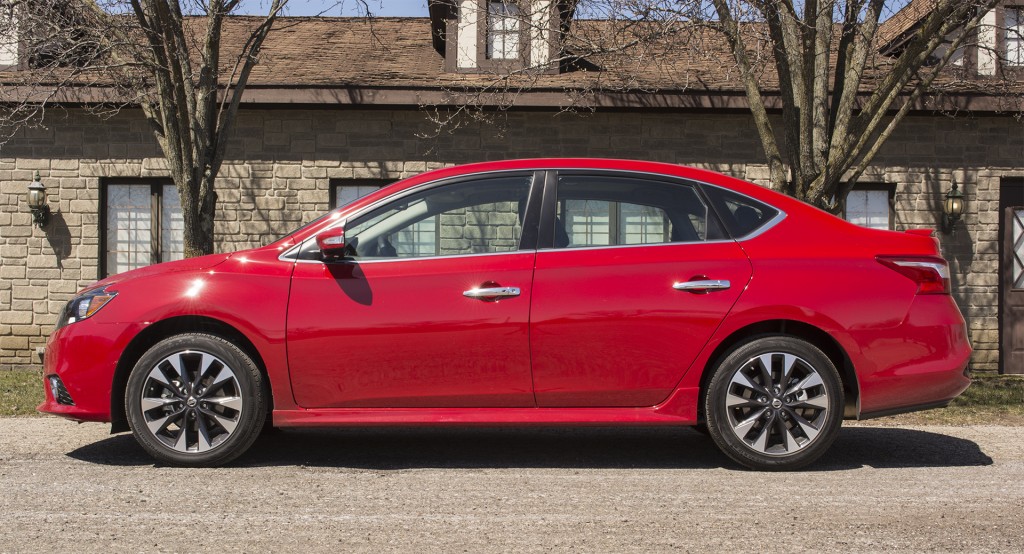 The 2016 Nissan Sentra will not take home any awards for its design. The basic Sentra shape that Nissan launched back in 2013 remains mostly unchanged. There is a new front end that helps bring the model in line with the current design language. Along the side profile is a bold character line that runs from the front to rear fender.

But the Sentra does gain some style if you opt for the SR trim. It includes mesh inserts for the grille, LED accent lights, sill extensions for the lower body, seventeen-inch aluminum-alloy wheels with a dark finish, chrome exhaust tip, and a rear spoiler. These small changes transform the Sentra from a plain jane compact to one with a little bit of attitude. 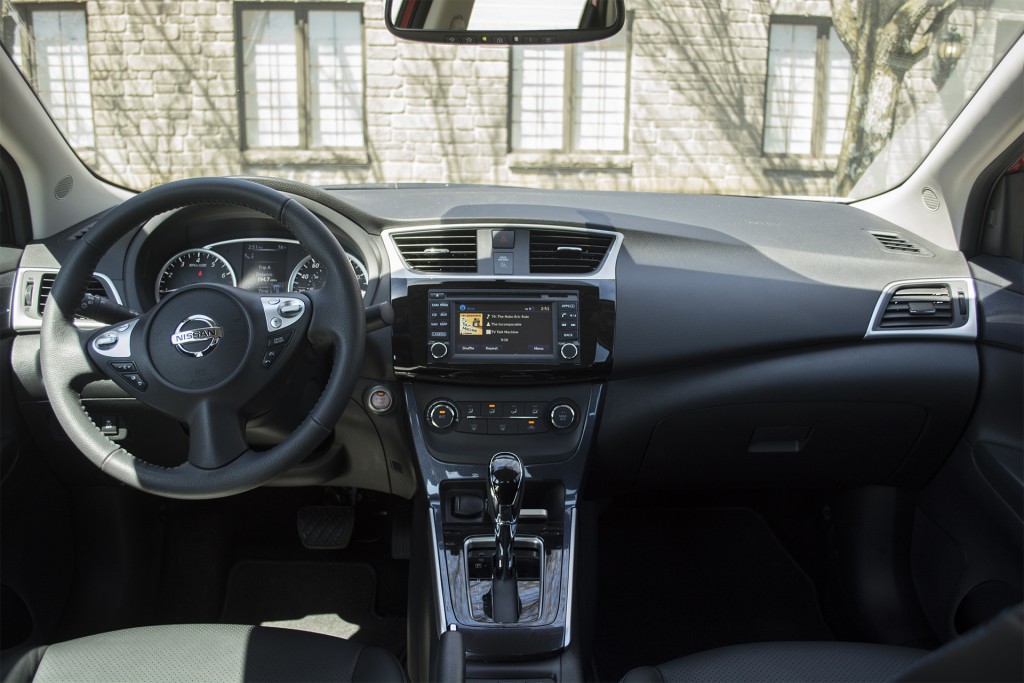 The Sentra's interior didn't see many changes during the refreshing process. The design is still conservative with simple shapes. But the interior gives the impression of being well built with a good mix of hard and soft touch materials, and no rattles or squeaks coming from the dash. Our SR tester came with a set of optional leather seats. The seats themselves provided good comfort for short trips, but we found ourselves wishing for a bit more thigh support on longer trips. At least finding a comfortable driving position is an easy process with an optional six-way power seat and tilt-telescoping steering wheel. Most back seats in compact cars are seen as a penalty box with a small amount of head and legroom. But the Sentra's back seat is quite the opposite as it is the largest in the class. Tall passengers will have no qualms sitting back here as head and legroom figures come close to midsize sedans. Trunk space measures out to 15.1 cubic feet which put the Sentra towards the top of the class. 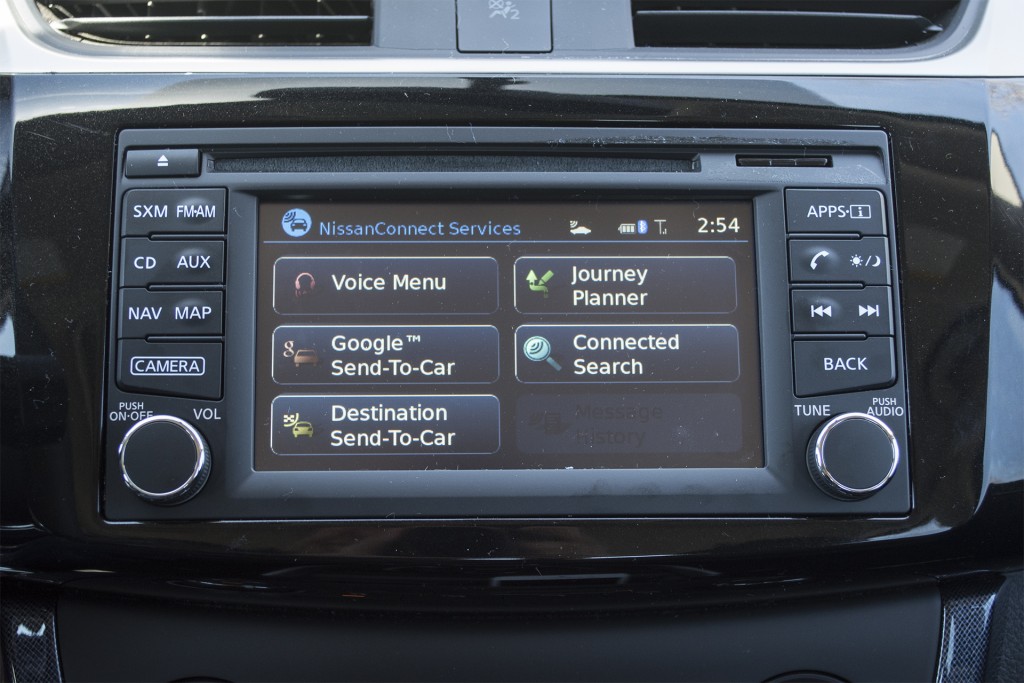 Sentra SV models and up come with the NissanConnect infotainment system with a five-inch touchscreen. Our SR tester featured an optional package that added navigation, NissanConnect services, and mobile apps. We're not fans of NissanConnect for a couple of reasons. The first is the interface looks dated when compared to competitors, despite being one of the newer systems on the market. Second are some of the odd choices made by Nissan with this system. An example is there not being a pause button for whenever you're listening to something from a USB device or Bluetooth. The only way we found it would pause is turning the volume down to zero. The system does redeem itself somewhat when it comes overall usability. Performance is snappy and the interface is easy to navigate.

Optional for the Sentra SR and SL is NissanConnect services. This provides a number of services to an owner such as automatic 911 notification in the event of an accident, tracking your vehicle if it is stolen, roadside assistance, ability to remote start and lock your vehicle from your smartphone, and sending directions from Google maps to the vehicle. Nissan will provide a six-month trial of their services when you buy or lease a Sentra. Plans start at $11.99 per month.

The EPA rates the Sentra SR at 29 City/38 Highway/32 Combined. Our average for the week landed around 32.4 MPG. Those who want to maximize fuel economy should look at the Sentra FE+ S model that is rated at 30 City/40 Highway/34 Combined. This is due to Nissan making some tweaks to Sentra's aerodynamics and low-rolling resistance tires. 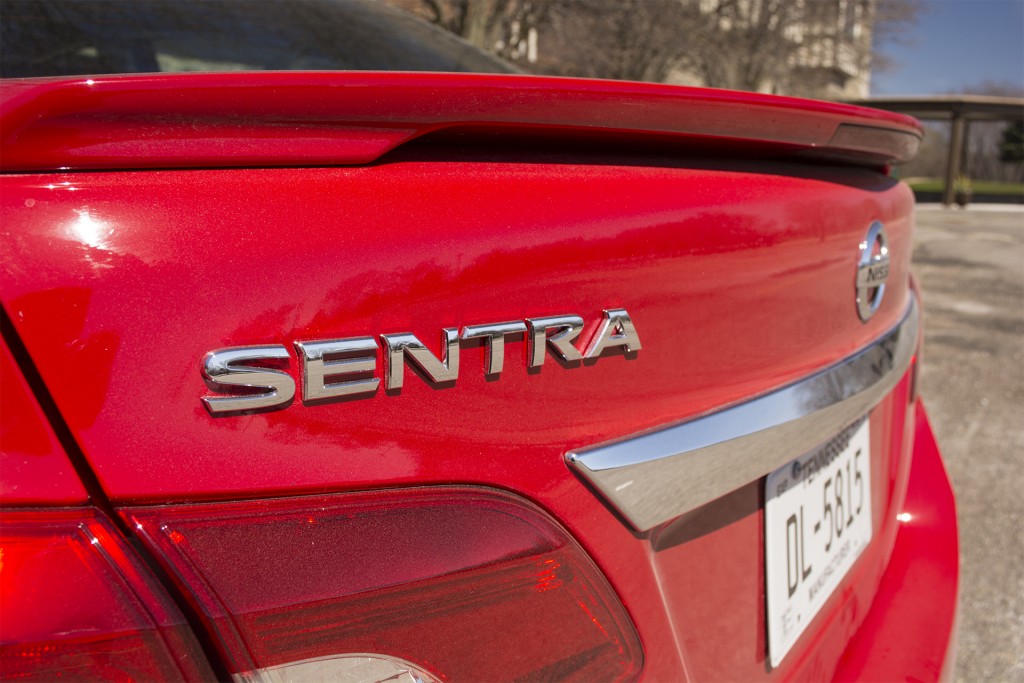 Depending on who you ask, the 2016 Nissan Sentra is predicted to have either average or poor reliability. J.D. Power believes the 2016 Sentra will follow in the footsteps of the 2014-2015 models with an average rating. Over at Consumer Reports, they give Sentra a poor rating in their predicted reliability survey. One caveat needs to noted with the Consumer Reports rating. They don't have enough data on the 2015 model to provide a complete history. They're basing this on the 2013 and 2014 models which got poor and good ratings.

The 2016 Nissan Sentra earned the Insurance Institute for Highway Safety's highest honor of Top Safety Pick+ for 2016. This means the Sentra earned a good rating in all of IIHS' crash tests and the new crash avoidance/mitigation test. In the National Highway Traffic Safety Administration's battery of tests, the 2016 Sentra has an overall four-star rating.

Standard safety equipment for the Sentra includes a number of airbags, active head restraints, traction and stability control, and anti-lock brakes. The SV comes with a backup camera and Nissan's Easy Fill Tire Alert system. This uses audible and visual signals to let you know that you have achieved the right tire pressure. The top of the SL features blind-spot monitoring with rear-cross traffic alert standard. This is optional on SR trim. Both the SR and SL can get radar cruise control and a forward collision mitigation system through an optional package.

One issue we wish Nissan would address deals with their blind spot monitoring system. Unlike most automakers who put the warning light in the side view mirror, Nissan puts the light in between the door pillar and window. We found that we wouldn't see the light whenever a vehicle was in our blind spot. 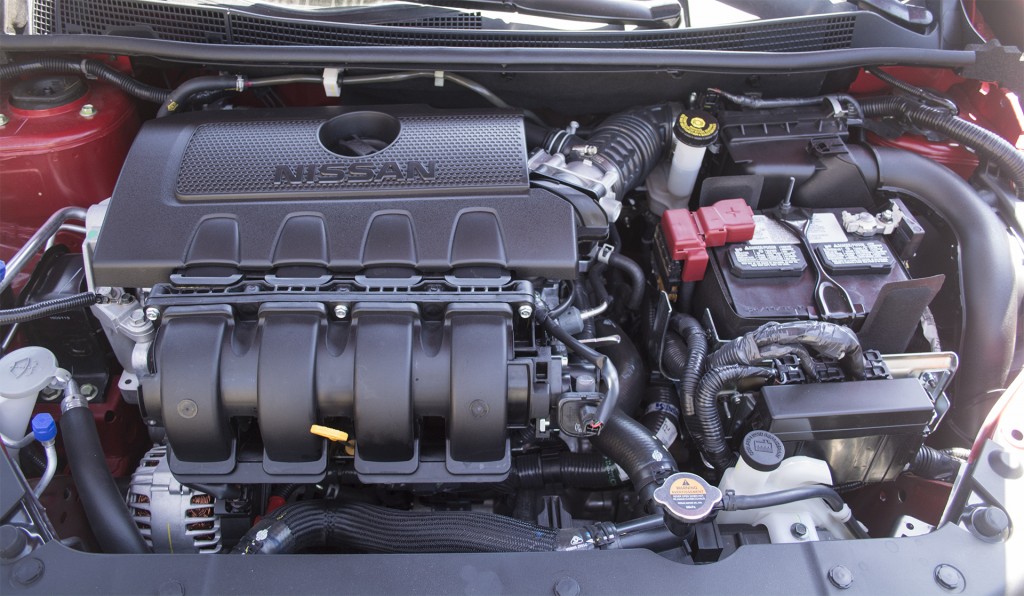 All Sentras come with a 1.8L four-cylinder with 130 horsepower and 128 pound-feet of torque. The base S and FE+ S come with a six-speed manual as standard. A CVT is optional on the S and FE+ S models and standard on the remainder of the lineup. The small power figures mean you won't be moving at a decent clip. Performance can be best described as lethargic as it will take the Sentra few seconds longer to get up to speed than other competitors. At least the CVT is one of the best in the class by mimicking an automatic transmission's gear shifts. The transmission also doesn't suffer from the rubber-band effect - engine rpms climb up before dropping back down - like other competitors.

The Sentra does redeem itself when it comes to ride quality. Smooth and relaxing would be the words to describe how the Sentra's suspension deals with roads of any shape. We do wish Nissan had done a better job of isolating tire noise as you can hear it when driving on a freeway. At least wind noise is kept to very acceptable levels. SR in Nissan's parlance means this model is the sporty one with tweaks to the exterior and suspension. In the case of the Sentra SR, this only applies to the way it looks. Going around a corner, the Sentra doesn't show any body lean. But the steering feels a bit light and somewhat disconnected from the road.

The 2016 Nissan Sentra lineup starts at $16,780 for the base S and climbs up to $22,170 for the top SL. This makes the Sentra one of the lower-cost compacts in the class. The SR sits just below the SL with a starting price of $20,410. Equipped with two option packages that add leather seats, power driver's seat, navigation, Bose sound system, radar cruise control, forward collision mitigation system, and a power moonroof, brings the as-tested price to $25,245. Considering you get most of the features of SL through these two packages, the SR would be our pick of the bunch. 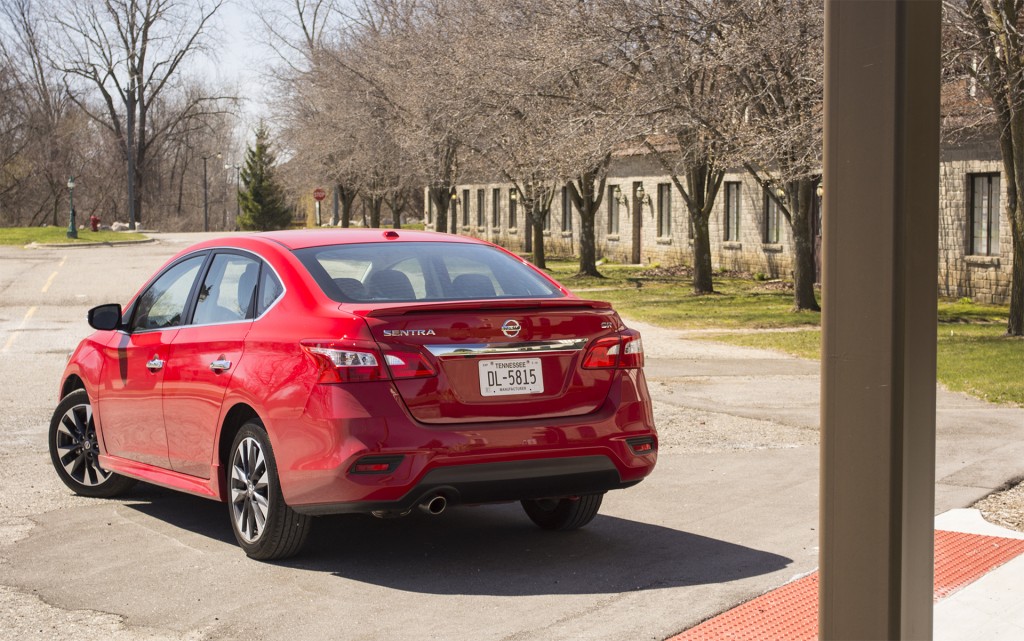 The compact car marketplace has been getting better and better every year. It seems there is a model that will fit your needs and desires. For example, if you want something that is quite fun to drive, you can't go wrong with the Ford Focus or Mazda3. Need some practicality? The Volkswagen Golf and Jetta should be closely looked at. If you want a car for the money, the recently updated Hyundai Elantra makes a strong case. Then we have the redesigned Honda Civic that could be the best compact in the class.

The 2016 Nissan Sentra really doesn't have something that makes it stand out from the crowd aside from its large back seat. But it is a competent compact sedan that goes about its business with mostly no issues. We really would like Nissan to add some extra oomph to the Sentra's engine as it would help it make a bit more competitive. But as it stands, the Sentra is a good vehicle if you want something to get you from point a to b with no fuss and a lot of equipment to boot.