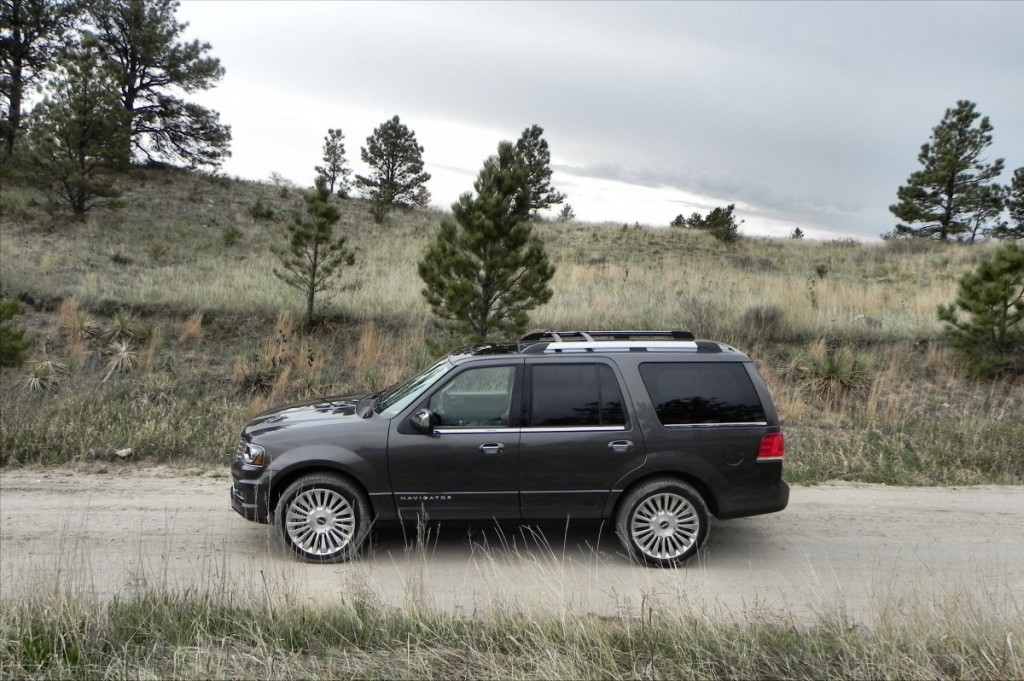 Overview (Final Score: A)
The 2015 Lincoln Navigator has seen a bit of an overhaul for the new model year. A new engine, some chassis changes, and some refinements to the exterior have been made. These have improved the Navigator without impinging on its core excellence, which is delivering a lot of comfortable passenger space without breaking the bank.

The three-row Navigator comfortably seats up to eight adults and is one of the few in this (or any) segment that can boast an adult-friendly third row. Cargo space is cavernous and towing is phenomenal thanks to a powertrain taken directly from the best-selling F-150 pickup truck line. This towing and power comes with some of the best fuel economy in the luxury SUV segment as well, adding to the appeal.

In a field of NBA-sized rivals, the 2015 Lincoln Navigator still manages to stand tall on the court with a compelling array of understated excellence.


What We Loved About the 2015 Lincoln Navigator


What We Didn't Love About the 2015 Lincoln Navigator 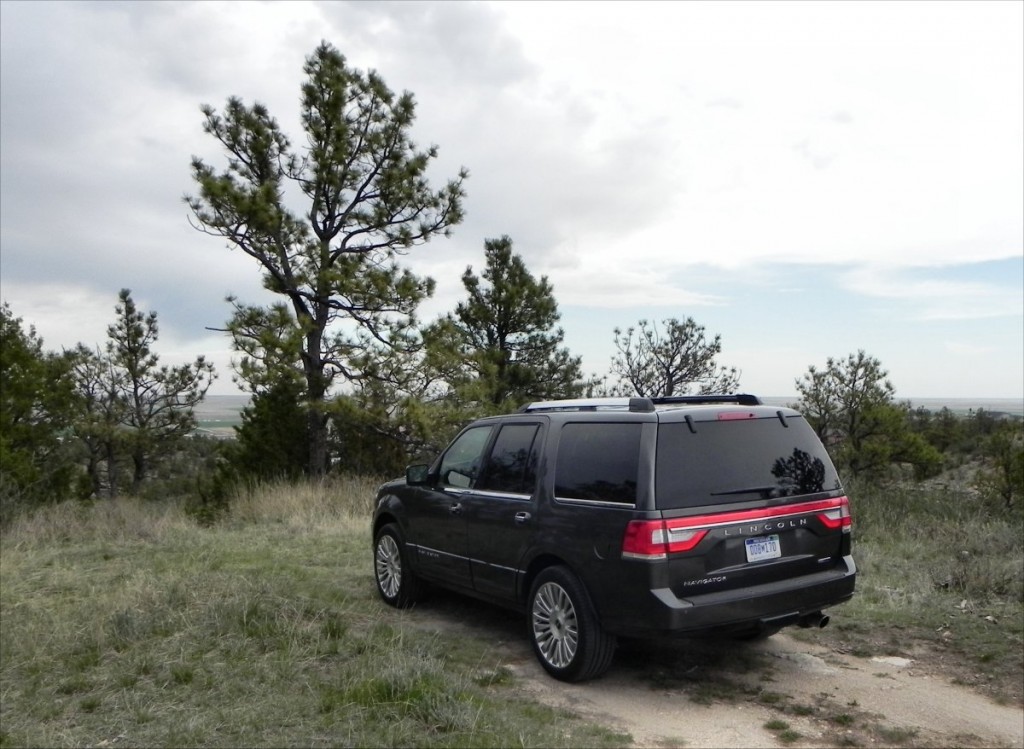 Exterior View (8/10 relative to market)
For the 2015 model year, the Navigator sees several updates to its exterior styling. The changes are largely meant to bring the Lincoln Navigator in line with the rest of the marque's lineup in terms of style. In this mission, it accomplishes its goal well, with the new split wing grille being the most obvious change.

That front grille sits over a stylized bumper fascia that carries a more car-like appeal than it had before. Flanking the bumper are two wide, square headlights that match the rest of the big Lincoln's boxier look. Lines over the hood lead to the windshield and the fenders are de-emphasized by wide wheel arches and light flaring.

From the side, the 2015 Navigator's look is dominated by those squares, with a boxy appeal and straight lines to define it. It comes together in an overall style that is big and bold, but not flashy. It's clear that this is both a luxury truck-based SUV and a capable machine in one package.

The 2015 Lincoln Navigator's look is a lot more understated than most of its rivals. There's no hiding the fact that the Navigator is a big sport utility, of course, but it doesn't lord that over others sharing the road. The exterior look also plays into the new drive dynamics of the big Lincoln, which are far more car-like than might be expected. 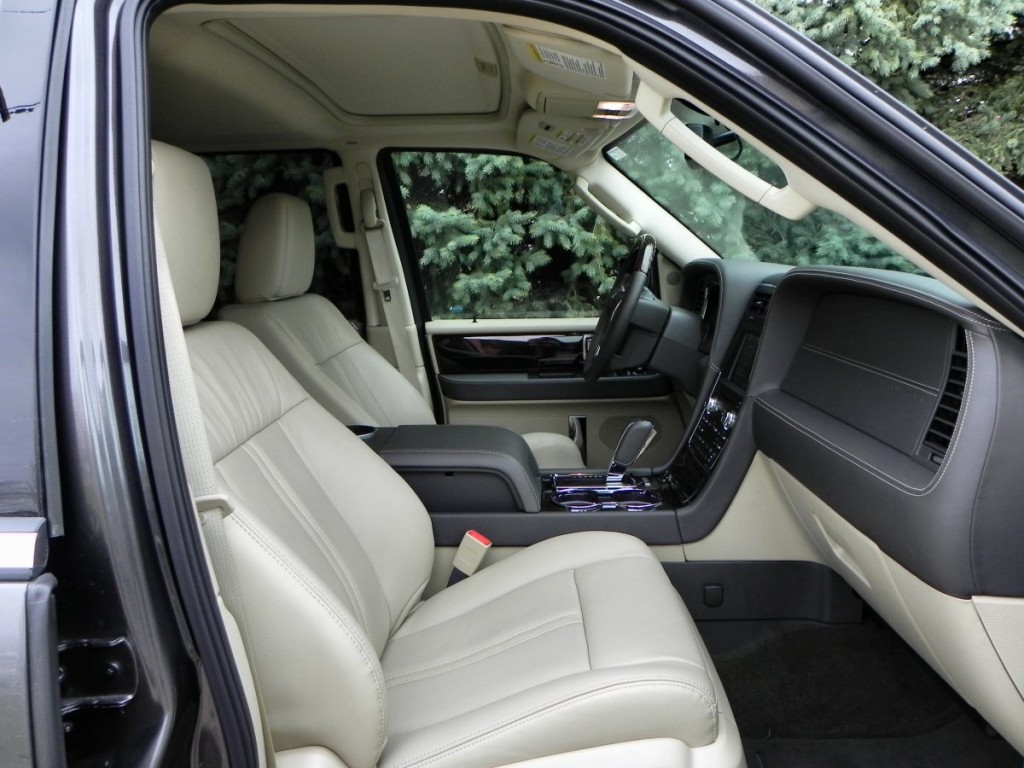 Interior Comfort, Quality, Ergonomics (9/10)
By far the most compelling elements of the 2015 Lincoln Navigator are in its interior. Standard features abound in the Navigator, with amenities including multi-zone climate controls, seating for up to eight, a 14-speaker surround sound stereo system, heated and ventilated front seats, and much more.

These features compliment one of the largest cabins in the luxury SUV category with big, accommodating seats in the front, excellent captain's chairs (or optional bench) in the second row, and one of the few third rows that is honestly usable by adults. In front, the driver and front passenger are greeted with copious amounts of legroom, augmented by a tilt-telescoping steering wheel and extendable-retractable driving pedals as standard equipment. Driver controls, the instrument cluster, and infotainment are all well-placed and easy to learn.

In the second row, captain's chairs are standard and offer nearly as much room and adjust-ability as the first row enjoys. Headroom and legroom are excellent and the second row enjoys its own climate controls (controlled from their own interface or in the front). Child safety seats are very easy to install as well. 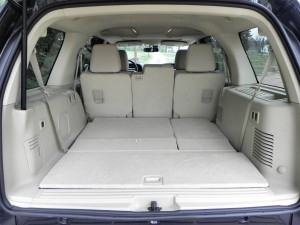 In the third row, access is a bit cramped if the second row isn't folded entirely forward for access. Once inside, though, even adults will find the third row comfortable for most trips. Lincoln redesigned the rear end of the Navigator to an independent rear suspension, removing the solid axle and freeing up more space for seating here. This means that headroom and legroom are far better than is found in most of the Navigator's rivals. The third row also has its own climate controls.

Cargo space in the 2015 Navigator is excellent as well. The standard wheelbase model has 103 cubic feet of space with the third row stowed (power folding is standard). The longer L model sports 128 cubic feet. Things only get larger with the second row folded.


Technology (8/10)
The Navigator's infotainment is powered by the new-generation MyLincoln Touch system, which is based on the MyFord Touch interface. The system's primary drawback is its occasional hesitation when moving through menus. Most of the time, however, it's relatively easy to use and the large touchscreen is helpful in keeping things easy to read and virtual buttons large enough to easily select. 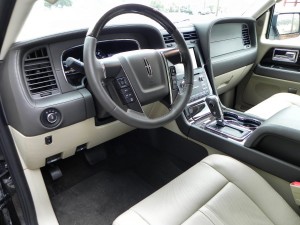 The greatest boon to the MyLincoln Touch system, however, are improved voice commands. Redundant with most of the system's physical or virtual buttons/menu choices, the voice command system allows the driver or front passenger to quickly navigate by just pressing the voice button and stating commands or menu choices.

Smartphone integration is also good in the Navigator. The learning curve can be high, but for those who wish to use this, it's well-done once you do figure it out. Lincoln provides a useful user's manual and online tools for aiding the learning process.

Other technology options in the Lincoln Navigator are based around safety. Part of that smartphone control system is MyKey, also standard in the system, which allows one of the keyfobs to be designated for less experienced drivers. This gives parents the option of setting speed limits, stereo volume limits, etc. for teenage drivers.


Fuel Economy (8/10)
Fuel economy in the 2015 Navigator is good for the segment. The new six-cylinder engine has solid output numbers and achieves up to 18 mpg combined. That number comes in a rear-wheel drive Navigator in its standard wheelbase, which achieves 16 mpg in the city and 22 mpg on the highway per the EPA. That same wheelbase with the four-wheel drive option sees 17 mpg combined (15 mpg city, 20 mpg highway). Our real-world time in a 4WD standard wheelbase Navigator returned 15 mpg over 350 miles of mixed driving.

In the long-wheelbase 2015 Navigator L, the EPA rates fuel economy at 17 mpg combined and 16 mpg combined for the RWD and 4WD options respectively. 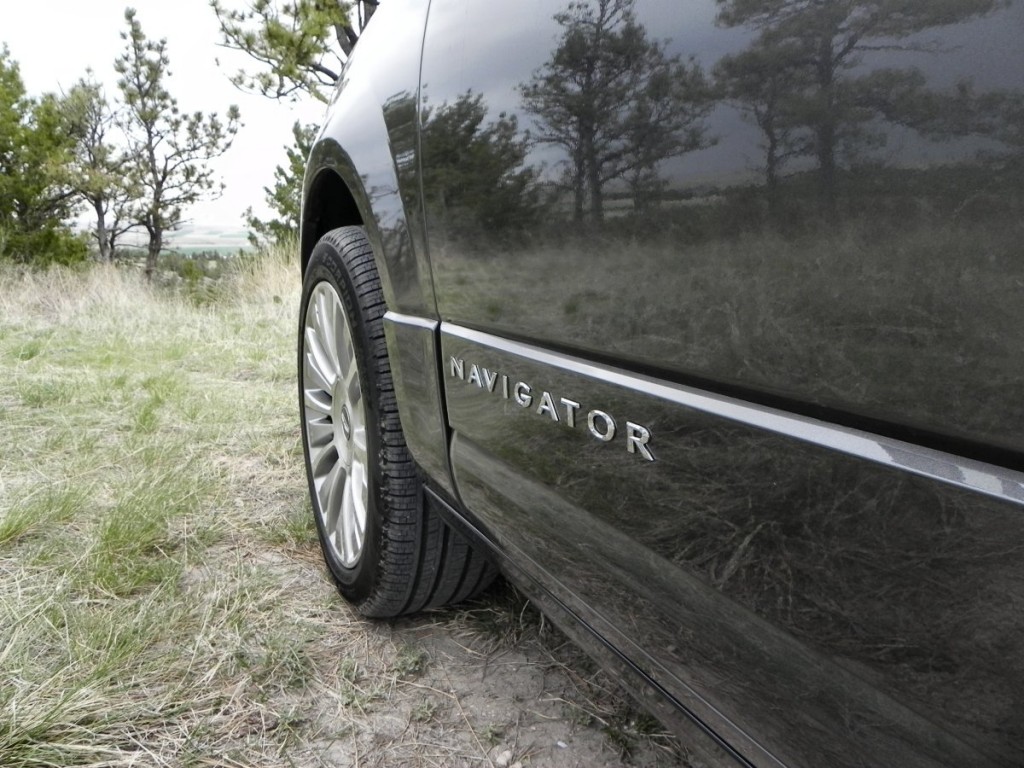 Predicted Reliability, Initial Quality Ratings (8/10)
There have been no safety recalls for the Navigator in the 2015 model year and the J.D. Power Vehicle Dependability Study rates the Lincoln at above average for its expected reliability.

The standard warranties for the 2015 Navigator is a four-year/50,000-mile bumper-to-bumper warranty and a six-year/70,000-mile powertrain warranty. This is on par with the industry for the luxury segment.


Safety (8/10)
The 2015 Navigator includes a host of standard safety equipment that matches its luxury status. Things like blind-spot monitoring, daytime running lights, and a lot of airbags all help make up that list. In crash testing, the National Highway Traffic Safety Administration rates the Navigator with a 5-Star overall rating. It achieved five stars on all tests except the Rollover, where it scored three. The Insurance Institute for Highway Safety has not yet crash-tested the Navigator for this year. 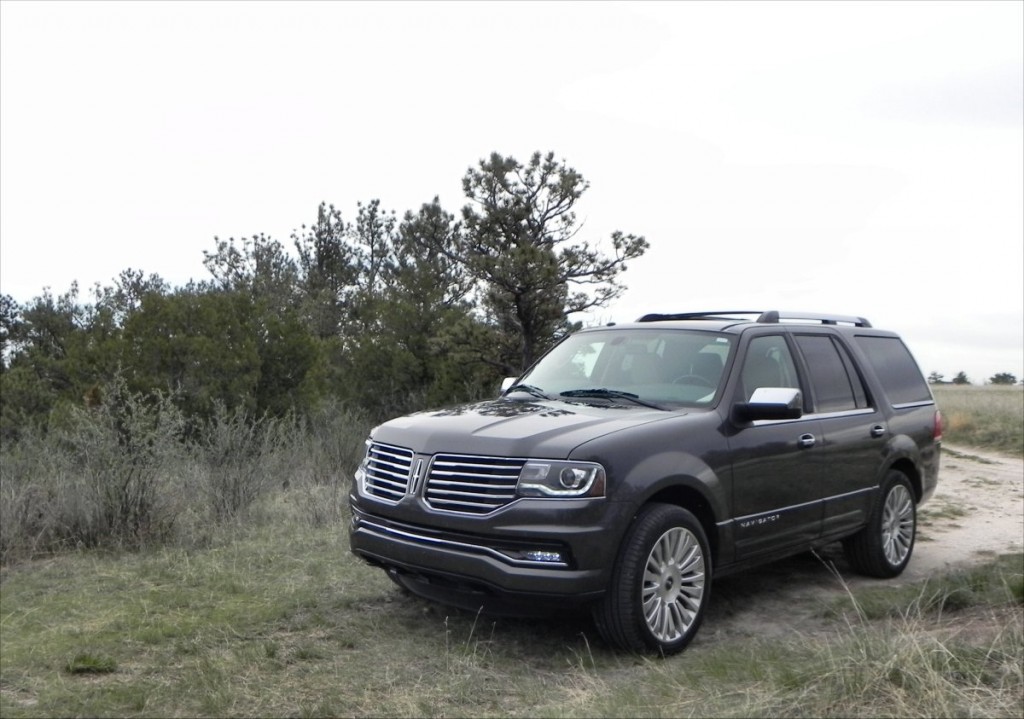 Performance (9/10)
The 2015 Lincoln Navigator is surprisingly nimble, sporty, and capable for its size. We expected the big SUV to be able to tow a fair amount of cargo and have the passenger capacity of a small bus, but it's also fairly light on its feet and maneuverable given its bulk. This comes thanks to a combination of steering and engine output.

The 2015 Navigator is powered by a 3.5-liter turbocharged six-cylinder engine from Ford's EcoBoost family. This engine drives the F-150 pickup truck and is proven as a half-ton hauler. The engine outputs 380 horsepower and 460 pound-feet of torque through a six-speed automatic transmission as standard. Rear-wheel drive is the norm, but a light-duty four-wheel drive system is an option. That 4WD system is good for light use on established off-pavement drives and in inclement weather, but not for serious offroad driving.

Towing in the Navigator is rated at 9,000 pounds, which is class-leading for the segment without resorting to specialized drivetrains.

The high torque output at relatively low RPM rates mean that the 2015 Lincoln Navigator has fast power delivery in city and highway driving. This gives confident acceleration out of stop signs, stop lights, or when passing on the highway. It's a solid powerplant and though new for the 2015 model year, it's been well-proven in other big vehicles in the Ford line.

The Navigator also enjoys nimble handling compared to most of its rivals. Steering is good, though we'd not call it "tight" or "sporty," and maneuverability for the big machine is excellent. The independent rear end means less drag around corners and makes a difference when backing into a parking slot. Good visibility from the driver's position and an array of parking aids are also a boon.

Out on the road, especially at highway speeds, the Lincoln Navigator is very smooth and comfortable. Again, that independent rear suspension means more comfort for all who ride in the Navigator and the Lincoln's reputation for a quiet cabin remains intact with this new design. Despite huge wheels and small tires, the Navigator holds a smooth course, absorbing most of the road with ease.


Pricing and Value (10/10)
Compared to other luxury sport utilities, the 2015 Lincoln Navigator is lower-priced than rivals. Its base manufacturer's suggested retail price (MSRP) sits at just under $62,000 and comes with a long list of standard equipment. With high fuel economy for the segment and copious amounts of interior space and capability, the Navigator stands tall.

As we drove it, the 2015 Navigator included 4WD and several accessories, but was still relatively modest in price at about $74,000. A similarly-equipped Cadillac Escalade rang in at over $80,000. 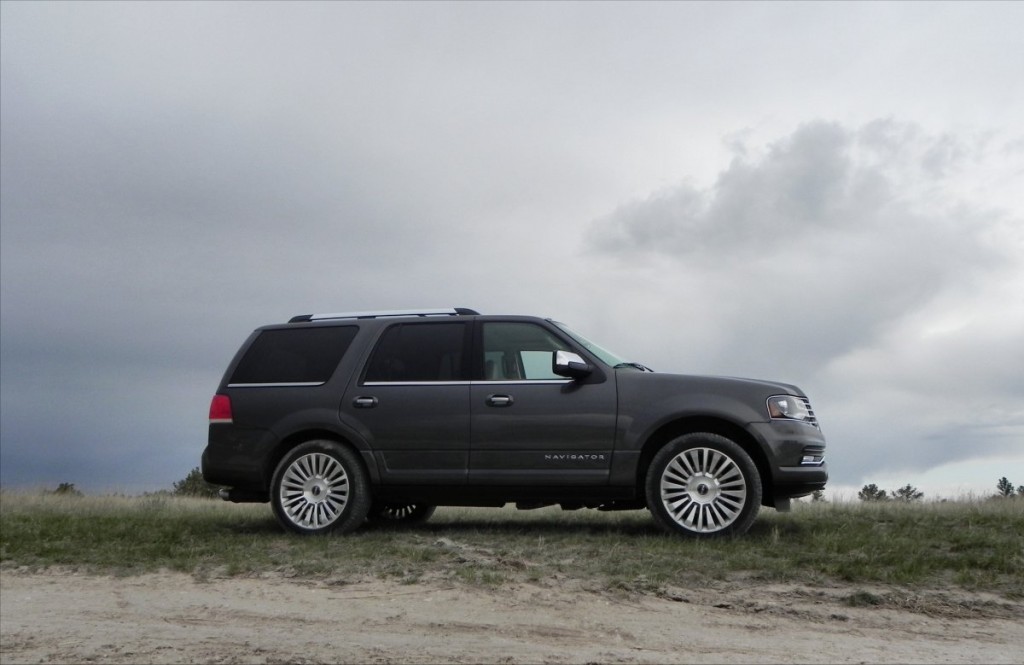 Total Score and Competitive Comparison (68/80, 85%)
The 2015 Lincoln Navigator competes with some strong rivals in the big SUV market. Chief among those is the Cadillac Escalade, which we reviewed with high marks. The price difference between the two is fairly large and the Escalade offers Cadillac's signature style inside and out along with a few features that aren't available for the Lincoln. The comparison between the two is a difference of personal style and expectation, however, as the Navigator offers better fuel economy and more understated luxury that isn't as eye-grabbing as the Cadillac.

Another rival is the Mercedes-Benz GL-Class sport utility, whose chief differences are its extremely high-end interior and available diesel engine. The Merc is far more expensive, though, which may dissuade some buyers.

The Navigator's attractive price tag and emphasis on usable versatility over bling factor are its best assets. The Navigator is posh and comfortable without being flashy or showy and its high towing capability and large (usable) passenger space are attractive in their own right. Few will find themselves disappointed for having considered the Lincoln in their shopping comparisons.