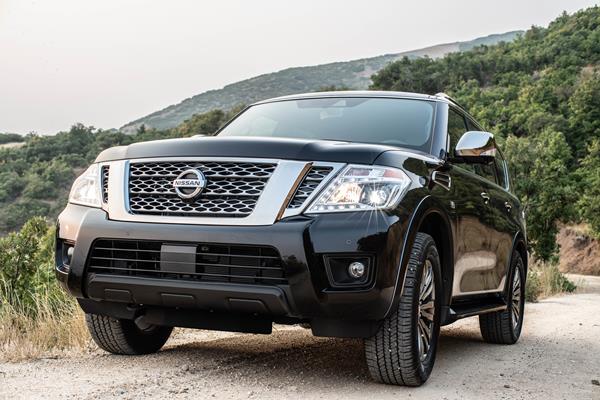 The Armada is a full-sized sport utility vehicle built on a traditional body-on-frame truck-style chassis. It's capable of carrying plenty of passengers and can tow respectable loads. The 2019 Armada features a sturdy-looking exterior, a good interior experience, and unusually large cargo space. The Armada is, however, showing its age in some respects and is competing in a segment against newer rivals.

Knowing that, however, the Armada retains its reputation for good looks, a powerful presence, and strong capability. It features smoother power delivery from its engine than most rivals and has an upscale appeal to its interior.

The current-generation Nissan Armada was introduced in 2017 as the second generation of the SUV. For 2019, the Armada is largely unchanged from that introduction, but now includes forward collision mitigation and adaptive cruise control as standard features.

The 2019 Nissan Armada seats up to eight and comes in three trim levels. Rear-wheel drive is standard and four-wheel drive is optional in the Armada and all trim levels are powered by the same engine and automatic transmission combination. 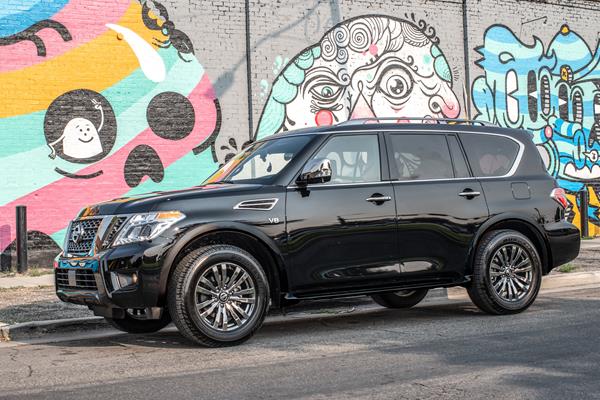 The 2019 Nissan Armada has a big, burly look about it that helps it stand out from the SUV crowd. Most SUVs are based on pickup trucks and show that in their exterior designs. The Armada is less truck and more squared-off muscle than most of the others on the market, though, with a somewhat refined, but very strong appearance. The signature Euro-curve at the rear pillar and flat-sided, tall look sets the Armada apart.

With a flat face and wide grille, large headlamps that sharpen a bit for emphasis, and a large lower intake with an approach guard begin the 2019 Armada's look at the front. A flat hood, wide and emphasized fenders, and a tall windshield continue that feel.

The Armada has a flat roof, with only the slightest of rearward taper, and a flat and pronounced beltline above gently rounded bodywork. The rear fenders are emphasized via the beltline's continuation to the rear hatch while flares around the wheels give a rear-biased power feel to the Armada.

Proportions on the big 2019 Nissan Armada are well done and clear, keeping the bodywork at about two thirds of the overall height and window glass for the remainder. Large wheels, good meaty tires, and plenty of space between tire and well finish the ready and capable look of the Armada.

The 2019 Nissan Armada features a comfortable, well-appointed interior. It's not as upscale in appeal as the luxurious Infiniti QX80 it shares a lot with, but it does have a highly premium feel to it. The Armada features good front row seating with sculpted lines that add to the supportive feel. The second row features the same, especially with the optional pilot seats in the upper two trim levels. Even the second row bench is good, though, with excellent outboard positions and a good enough middle space for a third adult. The third row is cramped and mostly for kids, though, which is a downside in today's full-sized three-row market.

The 2019 Armada has an accommodating and well-organized interior layout. The driver is treated to a good controls layout with most everything in reach for all but the shortest of drivers while tall folks will find plenty of adjustment as a good thing. The center bin and console offer plenty of gadget and stuff storage while wide door pockets allow for even more. 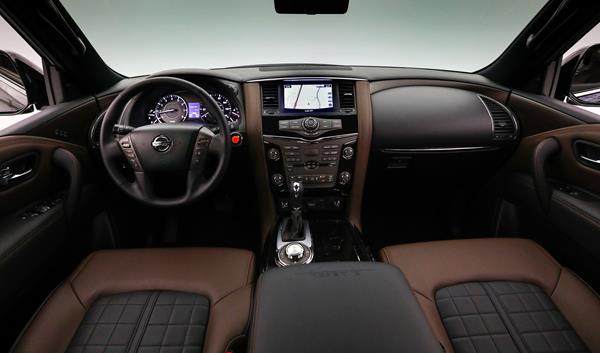 The second row has good storage as well, especially in the doors. The third row has drink holders and (in some optional packages) USB ports. We are disappointed with the large middle row armrest/storage bin in the captain's chair option, which not only impedes flat-floor loading with all seats folded, but also means that center space is not usable for easier access to the third row.

Cargo space in the 2019 Nissan Armada is better than many in the full-sized SUV segment, with 16.5 cubic feet behind the third row and 49.9 cubic feet with the third row folded. Folding down the center row opens up a large 95.4 cubic feet. One caveat is that the Armada sits high, making loading and unloading a bit tougher.

Through the trim levels, the infotainment changes little in the big Armada. The screen is just about adequate, in size, for the big SUV, but has an outdated resolution and interface that makes it feel old. A central control knob controls most things, but it's a long reach from the driver's position to that knob, requiring a lean-forward.

Most smartphone integration, including Bluetooth, is easy, but there is no Apple CarPlay or Android Auto in the Armada for more advanced uses.

As it is, the capabilities of the 2019 Nissan Armada's infotainment are simplistic, but so is the interface, making it easy to learn how to use for most day-to-day things.

The 2019 Nissan Armada is EPA-rated at 14 mpg in the city and 19 mpg on the highway. Those are segment lows for fuel economy returns and in the real world, those numbers are fairly optimistic. Our average in a week's driving in the Armada was only 15 mpg overall.

What's more, the Armada has a small fuel tank for its size and MPG numbers, meaning there will be more stops at the pumps more often. 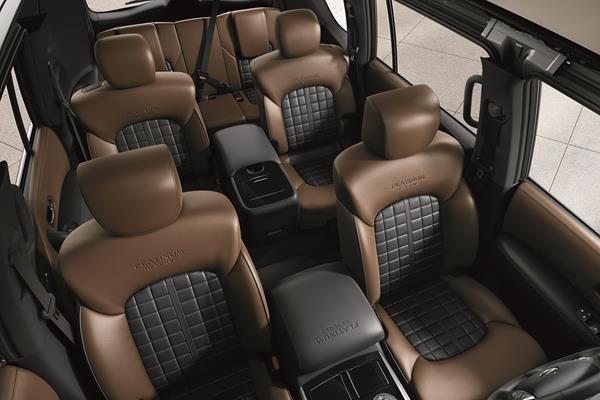 The Armada has a good reliability expectation in this generation of the SUV. The J.D. Power and Associates Vehicle Dependability Study rates the 2019 Armada as "Better Than Most" from consumer responses. The Armada has an industry-standard 3-year warranty and has not had any safety recalls as of this writing.

The 2019 Nissan Armada has received a four-star overall rating from the National Highway Traffic Safety Administration (NHTSA) for crash safety. It received three stars for frontal crashes, five stars for side crash results, and three stars for rollover tests.

The Insurance Institute for Highway Safety (IIHS) has not yet rated the 2019 Armada.

The 2019 Armada is powered by a well-done 5.6-liter V8 that outputs 390 horsepower to a seven-speed automatic transmission. Rear-wheel drive is standard and four-wheel drive is optional. Towing is rated at up to 8,500 pounds, which is very respectable for the SUV segments.

On the road, the 2019 Armada feels good on the road and does well on the highway. The big V8 outputs power in a smooth, easily-understood way with plenty of power when needed and not much intrusion otherwise.

On the highway, the 2019 Nissan Armada is remarkably quiet for its bulk and power. It's also more maneuverable than expected in tight situations, especially with the 360-degree camera system equipped. A smooth ride and good steering response are highlights in the big Armada.

The 2019 Nissan Armada is heavily incentivized as dealerships attempt to move inventory and compete with the best sellers in the segment, which outsell the Armada by better than 2 to 1. The Armada has the advantage of a low entry price with good equipment as standard, but suffers in the higher trims as it lags in technology. Fuel economy and safety are also concerns.

The Armada has about an average resale value for the full-sized SUV segment, which is generally high compared to other vehicle segments. 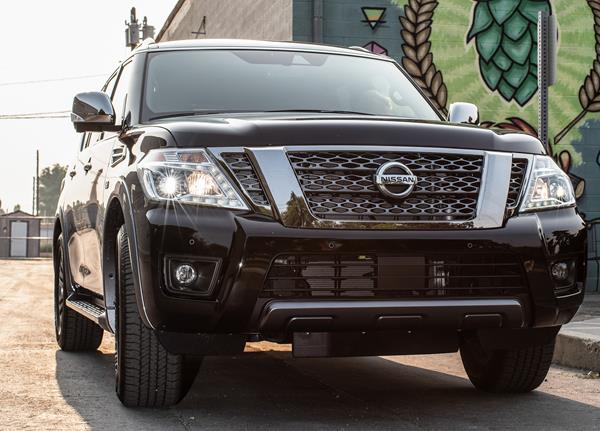 The full-sized three-row SUV segment is full of good options. The top options, in terms of sales and iSeeCars scoring, are the Chevrolet Tahoe and the Ford Expedition. Both offer similar capability, better fuel economy, and better interior ergonomics with far more up-to-date technologies. Both are also expensive, comparatively. As is the also very competitive Toyota Sequoia. The Sequoia suffers from some of the issues inherent to the Armada, but includes higher safety and similar reliability ratings as well.

The 2019 Nissan Armada is worth considering as a three-row option in the full-sized sport utility vehicle segment. It's got a good price point, strong dynamics, and competitive capability. For those who need more truck-like capability from a three-row family hauler, there are good options on today's market and the Armada is at least competitive.