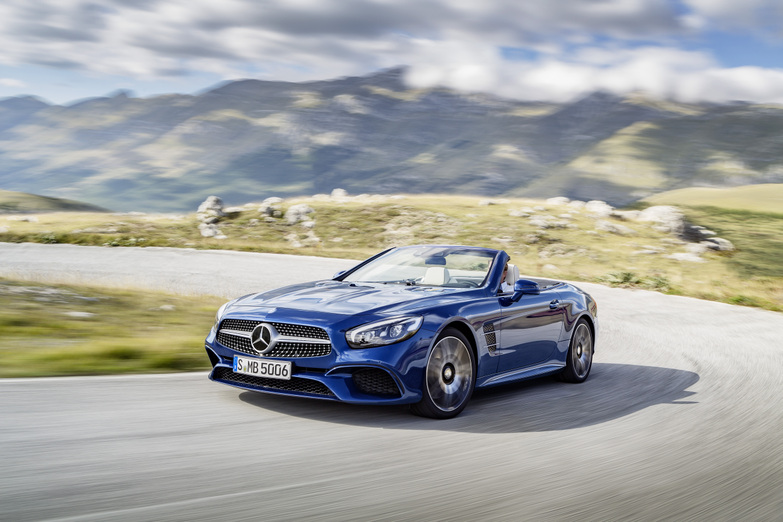 The world of luxury has its own classes. These segments are topped by the ultra- and uber-lux categories of vehicles that are as beautiful as they are exclusive. Playing in that field are some very high-end models, including the Mercedes-Benz SL-Class. With a starting price hovering in the neighborhood of some rural housing and top-end models whose sticker might sound like a suburban home purchase, the SL-Class manages to deliver on the expectations that kind of 6-figure tag implies.

The 2017 Mercedes-Benz SL-Class has four models, each of which with a different powertrain: the SL450, SL550, AMG SL and the AMG SL63. All four are as luxurious as you can imagine, with a drive dynamic and road presence that has no comparison.

The lost art of the ultra-luxurious touring roadster is kept alive through the Mercedes-Benz SL. Exterior styling updates, a new transmission for the SL450 and SL550, and some power upticks are the main upgrades seen for 2017.


What We Love About the 2017 Mercedes-Benz SL-Class:


What We Don't Love About the 2017 Mercedes-Benz SL-Class: 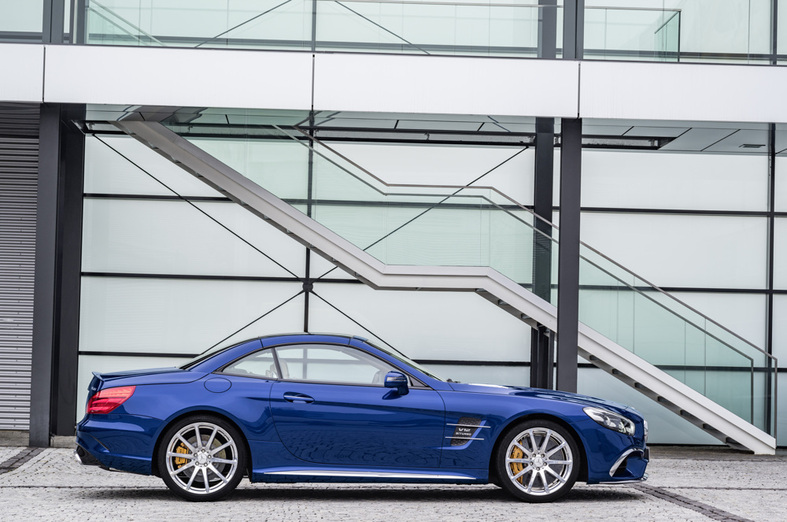 The 2017 Mercedes-Benz SL-Class has a beautiful exterior design that is all Mercedes. The shark-like look of the car comes from its long roadster-ish hood, heavy rear end and forward-leaning stance. With accent lines along the hood, deep insets in the bodywork, gills at the front brake exhaust, and a low, fast look, the Mercedes-Benz SL-Class is definitely good-looking.

The genre of two-seat coupes in the luxury class is filled with excellent examples of automotive design at its finest. The Mercedes-Benz roadster goes beyond most of those, with a wonderful mix of old world styling, new technology and classic elements. The low windscreen, hard-top stowage mechanism, long hood and sharp headlamps are all elements that create a beautiful whole.

The heavy haunches and muscular rear quarter blend with the powerful rear design of the SL-Class give muscle to the otherwise sinuous car. This is by far the best-looking Mercedes on the road.

The 2017 Mercedes-Benz SL-Class is about comfort. Even the big and tall will find that it accommodates nicely. More so than most two-seat coupes or convertibles do. The unusually large amount of seat adjustment, especially fore and aft, is a big part of this. It also has the side benefit of creating a space behind the seats, which can be used to store carry-on luggage, purses and so forth.

Mercedes also thought to use sun-reflective leather with heated and cooled seat backs for maximum comfort. On cooler days, the top can still be down thanks to a heated fan blowing air onto the driver and passenger's neck from the headrest bottom. Mercedes calls it an Airscarf. 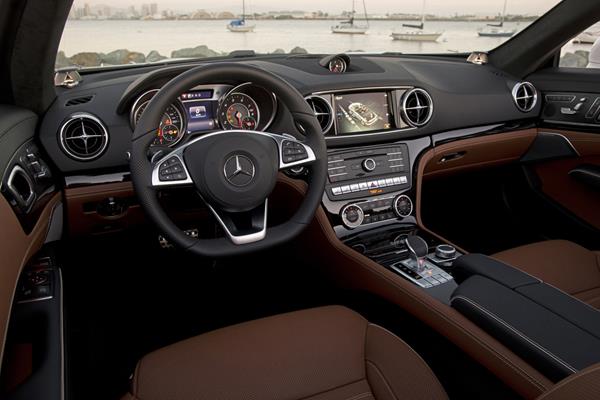 Everywhere in the SL-Class cabin are luxurious, high-end touches made of excellent materials and quality workmanship. With the top up and windows down, the SL-Class coupe has a well-shaped interior roofline that keeps wind buffeting at a minimum. With the top down, a wind screen can be activated to do the same so that conversations can be held, even at highway speeds.

Another high point for the already well-done Mercedes-Benz SL-Class is the trunk. The 2017 SL-Class has 8.5 cubic feet of space in the trunk when the top is down. The hard top sits over the trunk space, but lifts up when the deck lid is opened for access. A button back there allows the top to be folded down to check that everything fits before shutting the lid. These little touches make a big difference in a luxury ride like this. With the top up, trunk space expands (mostly upward) to a large 13.5 cubic feet. There aren't many convertibles that can claim this kind of room.

On some models of the SL-Class, a hands-free trunk opening is available that allows a swipe of the foot underneath the rear of the car to open the trunk. It's nice when you're in a hurry at an airport or hotel, with your hands full.

The COMAND system is relatively easy to use for simple tasks like radio tuning and so forth. More advanced items, including navigation, require a little bit of a learning curve, but the overall experience is a good one. Functionality for smartphone app integration is limited, even with the Apple/Android systems and a plugged-in phone, but most users will find plenty of usefulness for average needs. 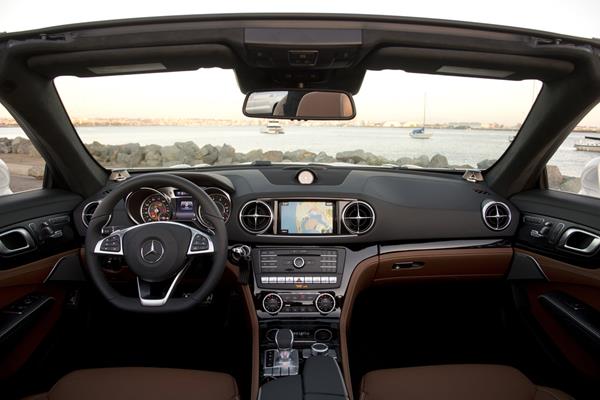 Fuel economy estimates for the 2017 Mercedes-Benz SL-Class are decent for the class, but not as good as might be expected of a small coupe/convertible like this. The base engine is a turbocharged V6, while a V8 and V12 are also available in various models of the SL. Surprisingly, the larger engines have better subjective fuel economy than the base option.

The J.D. Power and Associates Vehicle Dependability Study rates the 2017 SL-Class With a "Better Than Most" score. With no recalls as yet and that score from JD Power, we are inclined to give the SL-Class a high score for expected reliability.

The 2017 Mercedes-Benz SL-Class has not been crash tested by either the National Highway Traffic Safety Administration (NHTSA) or the Insurance Institute for Highway Safety (IIHS). The SL-Class does have a full suite of safety features, including available advanced safety technologies. 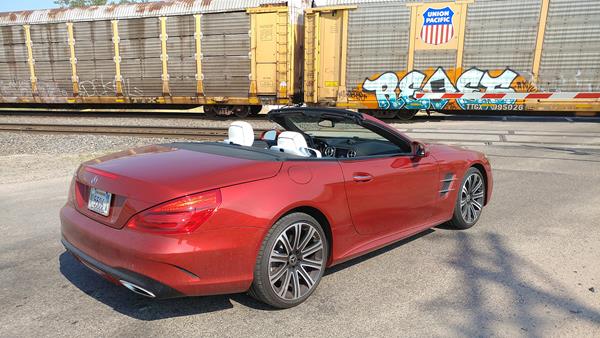 There are three engines and two transmissions for the 2017 Mercedes-Benz SL-Class. Each of the four models of the SL designates which engine/transmission option is used.

The base model SL450 we drove uses a 3.0-liter V6 turbocharged to 362 horsepower and 369 pound-feet of torque. A 9-speed automatic transmission is attached and includes manual shift control through either the shifter or paddles on the wheel. Rear-wheel drive is standard. The 0 to 60 mph time for this variant is fast at 4.9 seconds and we saw 5 second times easily, leading us to believe that Mercedes' estimates are real-world rather than track.

The AMG SL uses a 5.5L V8 that outputs 577 horses and 664 lb-ft of torque thanks to a turbocharger. A 7-speed high-performance transmission is used here and the whole shebang is 0 to 60 mph rated at 4 seconds flat.

On the road the 2017 Mercedes-Benz SL450 is a beautiful drive with a well-mannered demeanor and more than enough power to get frisky when the time is right. It's smooth in the corners, fast on the straights and generally happy to be moving at any time. This is a purely enjoyable car and by far the best Mercedes model we've driven to date. We can only imagine the other models kick that enjoyment up by notches with each performance increase.

In this class of vehicle, value is highly subjective. Most metrics regarding base price versus accouterments and resale values don't apply to the average buyer in the ultra-lux convertible market. With the base model selling for about the price of the average Midwestern home, it's difficult to use that as a starting point.

What's valuable about the 2017 Mercedes-Benz SL-Class is its extremely well-matched refinement and beauty that combines well with the car's ability to accommodate almost any drivers and their expectations. The base model is probably good for the majority of buyers, as the SL450 has everything that could be asked for by anyone who's not a pure performance driver. Only the pleasant growl of a well-tuned V8 is missing, and that can be had with the upgrade to the SL550.

The other two AMG models are purely about performance in a highly luxurious package. Those buyers are in a different league and will enjoy having the AMG SL and SL65 in their stable. 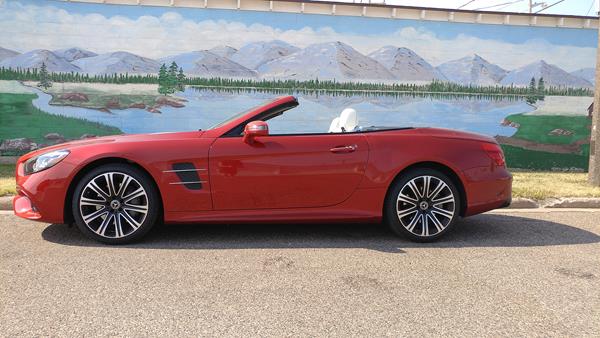 The art of the touring car is often lost in the push toward more and more performance versus luxury. The closest competitor to the 2017 SL-Class is the British Jaguar F-Type. Comparatively, others like the Porsche 911 and Audi R8 are much more sport than they are refinement for luxurious touring. At the higher-end, the Mercedes-Benz AMG models may be compared to some uber-luxury makes like Bentley or Aston Martin.

When it comes down to it, the 2017 Mercedes-Benz SL-Class is in a league all its own. We love it for that and are impressed by its well-rounded design with luxury touring and comfortable (rather than sport-tuned) driving as its core intent. Powertrain choices in the SL-Class are very well-spread, allowing any expectation to be met if your wallet is large enough.