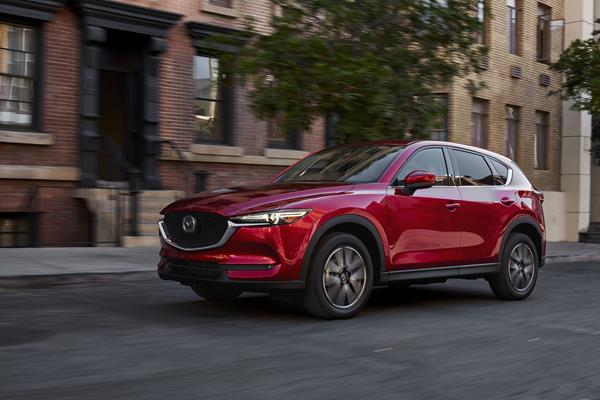 The Mazda CX-5 was introduced in 2013 as a new small crossover and it immediately rivaled mainstays in the marketplace with its dynamic feel and fun everyday drive. For 2017, Mazda revamped the CX-5 to add more comfort, a better interior and advanced safety systems as standard equipment. It's now one of the highest-rated crossovers in any class.

With these upgrades, Mazda didn't mess with its winning formula. The CS-5's SKYACTIV chassis and drivetrain remain much the same and just as sporty and fun. Mazda also left the CX-5's pricing structure and trim point levels roughly the same, keeping this little crossover poised to remain a high seller in the small, two-row crossover market.

There's a lot to love about the 2017 CX-5, from its charismatic good looks to its award-winning interior and engaging drive.

The 2017 Mazda CX-5 comes in four trim levels with front-wheel drive as standard and all-wheel drive as an option. This two-row crossover has seating for up to five and a standard split-fold rear bench. 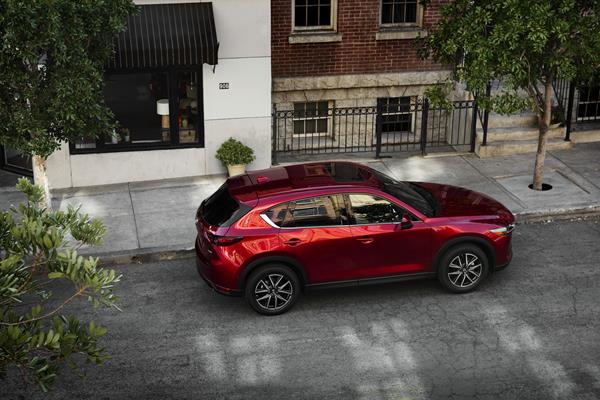 For the 2017 model year changes, the Mazda CX-5 is dimensionally the same as the previous generation. What's changed are some of the dynamics of this great-looking crossover.

The front grille has a more open look with gaps between the grille surrounds that draw the lower portion of the grille and the hood above. Those small gaps create an edge for the surround to continue under the headlamps for a more integrated, dynamic effect.

The hood rises in the expected Mazda curve, bumping upward to promote a bit of an engine cowl for muscularity. The fender edges are smoothed and, while well-defined, not as pronounced as they were in the previous-gen Mazda CX-5.

The bodywork and windscreen-to-roof lines are about the same as they were before, taking advantage of the "simple is smooth and smooth is better" design approach that Mazda's team is fond of. The notch from the rear pillar for flair and the rear wheels pushed to the edge of the bumper make for a sportier appeal and add length to the 2017 Mazda CX-5's wheelbase, for a more comfortable drive.

The new 2017 CX-5 is a great-looking crossover that stands out without being odd.

There are very few things to knock about the 2017 Mazda CX-5 and its interior experience. The driver and front passenger are treated to very well-done seating with plenty of visibility and room. Driver controls are well laid out and easy to follow. The instrument cluster is clear and well-positioned to avoid glare. Storage options and spaces for small items are plentiful as well.

In the back, the 2017 CX-5 has comfortable seats that are easy to access from wide-opening doors with low sills. The seats themselves are smaller than what's found in some rivals, with less legroom than might be found elsewhere. They are otherwise very good. A 40/20/40 split-fold is standard, allowing for numerous cargo configurations. 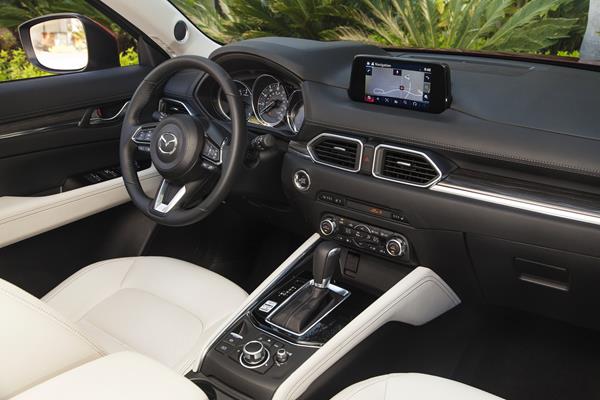 What really marks the CX-5 is the high quality of materials and the excellent attention to detail in the interior's craftsmanship. This is why Mazda often wins interior awards from groups like Wards. The overall design in the CX-5 is simple, but carries a very less is more attitude that pays off nicely.

Touches like the retracting door-mounted cargo cover, the flat loading floor and truly flat-folding rear seats, and the "high enough for normal people" loading height are all bonuses for cargo hauling. There isn't as much room in the CX-5 on paper as its rivals, but there's more usable space than might be found in many others.

The base model 2017 Mazda CX-5 has a 7-inch touchscreen and Mazda Connect infotainment. A control knob near the shifter is also present. In all CX-5 models, the touchscreen deactivates while driving, forcing use of the control knob to keep the driver and/or front passenger from leaning forward while the vehicle is in motion. Safety first.

This might seem like a distraction, but you quickly get used to the idea and can use the knob while driving through habit. It becomes easier because the menus on the Connect system are pretty straightforward and easy to understand.

Infotainment in the 2017 CX-5 isn't the best in the business, but it's nowhere near the worst. It's easy to use, connects quickly to devices, and generally does what's asked of it without complaint or a lot of brain teasing. Crisp output and a screen poised to avoid glare in most situations are also high points. 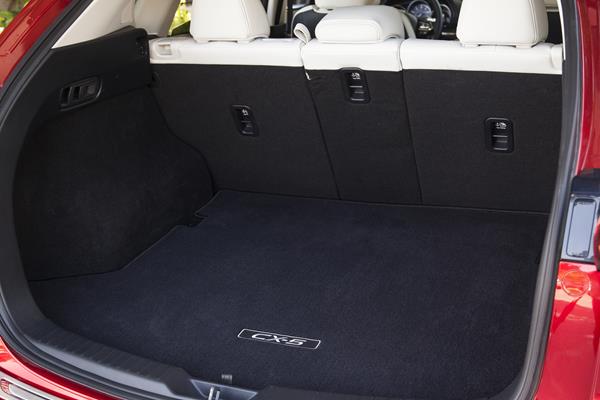 The 2017 Mazda CX-5 is EPA-rated at 24 mpg in the city and 31 mpg on the highway, which is above average for the segment in front-wheel drive. With all-wheel drive, those numbers drop to 23 city and 29 highway. Also higher than average in the segment.

In the real world, we saw close to those numbers, even at altitude and with cold weather. Our average in an AWD-equipped CX-5 was 25 mpg overall, which is very good.

The J.D. Power and Associates Vehicle Dependability Study rates the 2017 Mazda CX-5 as "About Average" for expected reliability. The warranty for the CX-5 is about average for the segment and Mazda enjoys a slightly higher than average reputation for dependability on the whole. There have been no recalls, as of this writing, for the 2017 CX-5.

Like all Mazda vehicles, the 2017 CX-5 receives top notch safety marks. The National Highway Traffic Safety Administration (NHTSA) gives the CX-5 a 4-Star overall rating, with five stars each for frontal and side crash and four stars for rollover.

The Insurance Institute for Highway Safety has rated the 2017 Mazda CX-5 as a "Top Safety Pick+." That IIHS rating means that the CX-5 received top scores of "Good" for all crash testing and for its standard or available advanced safety systems. 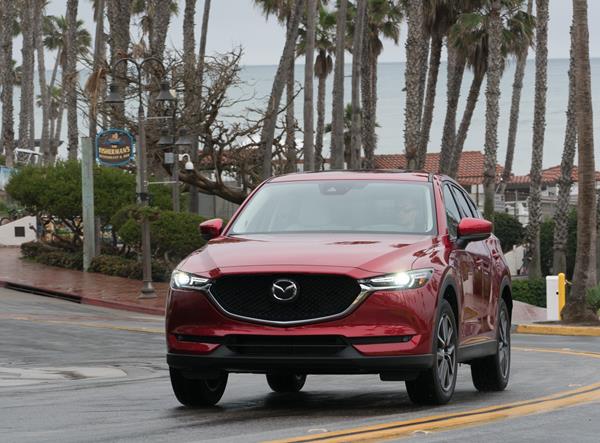 The 2017 CX-5 comes with a 2.5-liter four-cylinder engine that's capable of 187 horsepower. This mates to a six-speed automatic transmission as standard equipment. Mazda dropped the manual transmission that was available in the previous-generation CX-5.

The engine and transmission don't sound like much on paper, given the overall size of the CX-5 and segment averages. Yet they are both more than adequate for the crossover, thanks to Mazda's excellent engineering. Marketing might say "zoom zoom," but Mazda's engineers say "turn and say whee!"

The chassis controlling the 2017 Mazda CX-5 is similar to what was underpinning the previous rendition of the crossover, but has some tightening for better control and a little tuning for a nicer highway ride. The engine is eager to put out its maximums and the transmission shifts quickly without hesitation to keep those maxes high. Turning into curves and making corners is a thrill in the CX-5 that won't be found in any other non-luxury small crossover we've tried.

The 2017 Mazda CX-5 is very well priced for the segment. Its starting price is about on par with rivals, though its interior is generally better. Where the CX-5 really shines is in the Touring and Grand Touring trim packages. The Touring hits the $27,000-ish price point well with excellent equipment to include all-wheel drive and an upgraded interior. The Grand Touring averages about $3,000 more, but includes upgrades to infotainment, the stereo and possibilities for advanced safety options like crash mitigation. 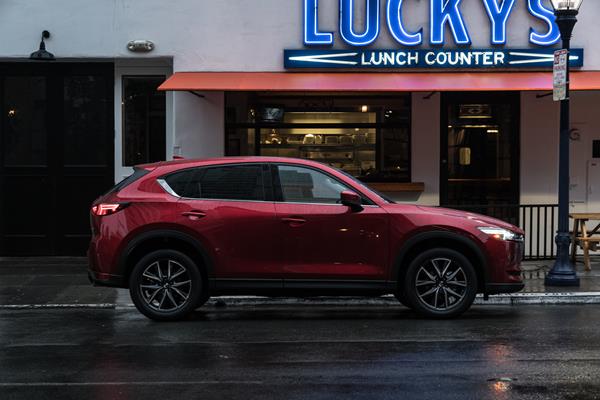 The 2017 Mazda CX-5 has no shortage of rivals in the small crossover segment. It's nearest competitor, in terms of all-around excellence, is the Honda CR-V. The Honda doesn't have the CX-5's good looks, but it does have a larger interior and equal fuel economy.

Also competing are the Toyota RAV4, which has less interior room and a more sluggish drive, and the Ford Escape, which has similarly high good looks and a smart interior, but a more expensive price tag with similar accouterments. Finally, the excellent Subaru Forester is worth considering against the Mazda CX-5. Though the Subaru has a less dynamic feel to its drive, it does have a stronger reputation for excellence.

The 2017 Mazda CX-5 is by far our highest-rated crossover-SUV in the small, two-row segment. It's slight weaknesses are nothing against its strengths and we cannot recommend the CX-5 enough, especially in its new 2017 rendition.