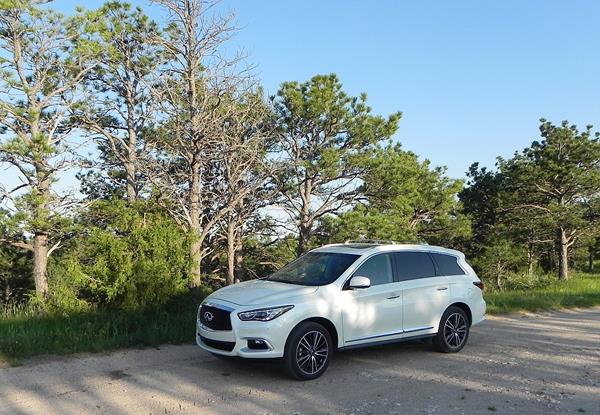 The Infiniti QX60 is the upscale brand's model of the popular Nissan Pathfinder crossover-SUV. Unlike the smaller crossovers in Infiniti's lineup (like the QX30), the QX60 is not aimed at sportiness nor is it the muscular powerhouse that the huge QX80 personifies. Instead, the QX60 is a luxurious family-oriented vehicle whose emphasis is on comfort and efficiency.

In that role, the 2017 QX60 is perfectly suited to the task. This three-row crossover is wonderfully plush and comfortable in both its interior design and its drive dynamic. Typical of the luxury brand, the Infiniti QX60 comes in just one trim level, with a handful of options packages available to tailor it to needs or wants.

Improvements for the 2017 model year include an upgraded engine, a new infotainment screen and some available convenience options. The Infiniti QX60 was more significantly revised for the 2016 model year and carries forward with those styling and interior changes. 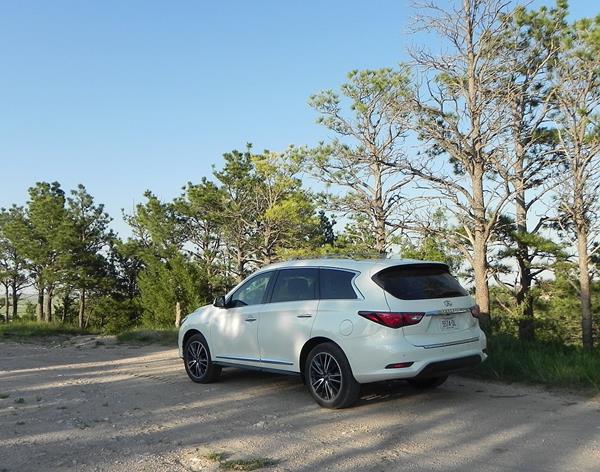 The 2017 Infiniti QX60 uses a combination of the Pathfinder's bodystyle and the more refined look of the Infiniti lineup, with good effect. Defining elements are the sloping rearward-tapered roofline, the rounded hood and the arched midsection to create a curvature that promises forward movement. This curvaceousness is emphasized by the tapering greenhouse, rear pillar curl and rounded hourglass grille.

Offsetting all of the curves are straight lines at the lower body, a tall stance and sharp corners to the grille surround, fog lamp bezel edge, and flattened fender edges above the wheels.

It's a gracious, well-done look that speaks to the QX60's generally luxurious nature, but may promise some performance that, frankly, isn't there.

The 2017 Infiniti QX60 may be the most luxuriously comfortable crossover you can find in this price point and market. If not, it's at least among the better of its peers. The QX60 is marked by quiet comfort in both materials design and ride quality. Leather and wood are the norm in this luxury crossover.

Up front the driver and passenger are treated to firm, well-designed seats that are both plush and comfortable without relying on over-done padding or springiness to accomplish that feel. Driver's controls are all within easy reach and the passenger has easy access to the infotainment and other items, as well as plentiful storage for gadgets and gear. 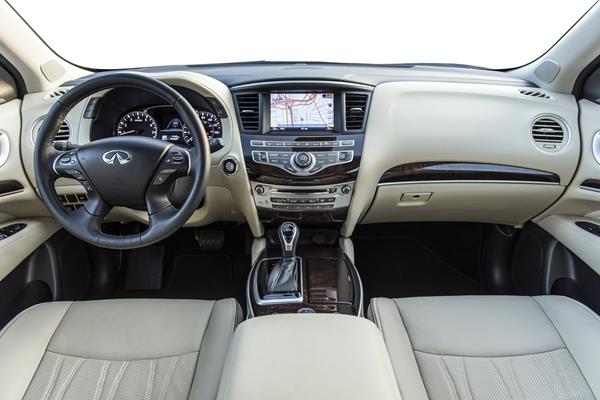 The second row features similarly well-done seating that rides a bit higher than expected, giving the second-row passengers a much more clear view of the road ahead than may be found in most competitors in this segment. The seats also fold forward quickly and easily, even with a child safety seat in place, to give ready access to the third-row seating behind.

That third row is well done and can accommodate adults for short trips, with plentiful leg and headroom. Knee position is not as good, as the low cushion height and high floor pinch together to accommodate the undercarriage. That said, the third row is more than adequate for children and teenagers. It's also one of the few third rows on the market with a tilt/recline feature.

The view from inside the cockpit is excellent with the QX60 giving a surprisingly wide view of the world outside, contrary to what the pinched exterior glasswork might imply. The driver has a solid view of every point around the vehicle despite its relative size. The added driver aids such as 360-degree cameras and other tools are a bonus.

With the third row up, the cargo space in the 2017 QX60 is pretty minimal at 15.8 cubic feet, or roughly the trunk size of a midsize sedan. But with those seats down, it becomes cavernous at 40.8 cubic feet and easy to access thanks to options like a motion-sensing rear hatch and one-button seat folding. The second row folds almost completely flat as well, adding even more room (76.5 cubes). 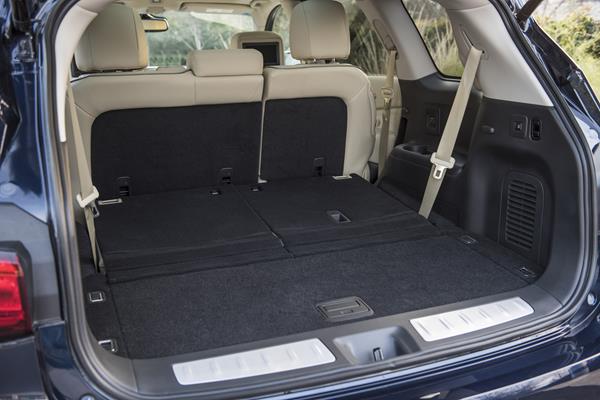 The 2017 QX60 benefits from a larger infotainment screen and uses the same knob-based command interface as it did before. Some features are more robust this time around and the screen clarity is much improved, with a crisper aspect ratio.

We like the user interface Infiniti uses for its simple design and the large number of redundant buttons that allow a quick jump to menu sections without a lot of menu hunting. There are some competitors with better infotainment and more options, but few are as easy to use as is the Infiniti. That said, the QX60 is not as up to date as some other vehicles in the Infiniti lineup, namely their sedans.

The 2017 Infiniti QX60 is surprisingly fuel efficient for the class. Despite the more powerful engine added this year, the QX60 still attains 20 mpg in the city and 27 mpg on the highway. The Hybrid model ups that to 25 mpg city and keeps the 27 mpg highway rating.

In the real world, our Infiniti QX60 with the standard gasoline V6 easily attained those EPA estimates with a 25 mpg overall return in mixed driving at high altitude. Using this crossover for a week as a family hauler for up to six people proved its mpg returns are realistic.

The 2017 QX60 is rated as "About Average" for expected reliability in the J.D. Power and Associates Vehicle Dependability Study. No recalls or serious problems have been reported for the crossover and the Infiniti warranty of 4 years or 60,000 miles for the vehicle and 6 years or 70,000 miles for the powertrain are about the standard for the industry. 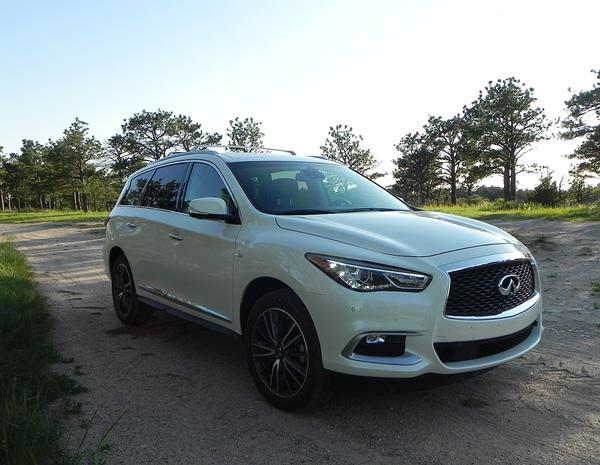 The 2017 Infiniti QX60 is one of the safest vehicles in its class. The National Highway Traffic Safety Administration (NHTSA) rates the QX60 with five out of five stars overall. The Insurance Institute for Highway Safety (IIHS) gives top scores of "Good" across the crash test results board, including for the small overlap front test where crossovers of this size often have issues.

The 2017 QX60 is not a sporty or fast vehicle and it isn't meant to be. For what it is, it returns great appeal and road confidence through its strong acceleration, unobtrusive transmission and comfortable demeanor.

The 3.5-liter V6 that comes standard with the Infiniti QX60 has been improved from the previous model year to produce 295 horsepower (vs 265). It is mated to a very well-done continuously variable transmission (CVT) that is well-programmed to deliver a shift-style response when the throttle is mashed down and muscle is what the driver seems to want. It otherwise eschews the traditional shifting of a transmission and delivers solid, unblinking RPM at all times, no shifting required. There are definite comfort and fuel economy benefits to a CVT and the QX60 does very well in taking full advantage of those.

Our chief complaint with the QX60 is its ease of driving. It's not much of a complaint, given the buyer this crossover is intended for, and centers largely on the lack of road feel through the steering and pedals. We expect that only driving enthusiasts will note this and they are not likely going to be buying the QX60 anyway. Nearly anyone who is buying in this segment will enjoy the QX60's confidence and unintrusive mannerisms. Towing in the QX60 is rated at up to 3,500 pounds.

The 2017 Infiniti QX60 is one of the best-priced luxury crossovers in the three-row class. Most buyers will likely be purchasing in the $45,000 to $50,000 range, depending on package additions, but the base price for the QX60 is at or below most of its competitor's base model offerings and has a bit more included. In the mid-range, it's about where most entry-level luxury crossovers might be and will definitely have more items included with those added packages.

We like the front-wheel or all-wheel drive 2017 Infiniti QX60 with the Premium package and Driver Assistance package added. This includes some great upgrades for the interior, such as a better stereo and more seat adjustment options, and adds some excellent driver aids like the 360-degree cameras and adaptive cruise control. All at a price well under $50,000. 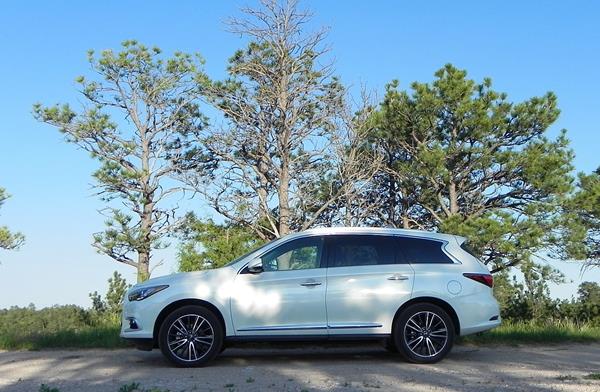 The competition in three-row luxury crossovers is fairly stiff, though at this size most options are either exceedingly comfortable or very sporty.

The Acura MDX and Volvo XC90 fall into the latter category while the Lexus RX 350 falls into the former. We like the Acura for its fun drive dynamic, but aren't as impressed with its interior or price point. The Volvo offers an excellent interior and a very ergonomic package, but can't match the Infiniti for fuel economy and third-row comfort. The Lexus is the closest competitor to the QX60 and, while a bit pricier, it does offer a more luxurious interior. Again, its third row is nowhere near as good as the Infinit's.

In the end, the 2017 Infiniti QX60 is the best family hauler in this luxury segment that we've seen. Its combination of great pricing, excellent comfort, good fuel economy and confident drive are a win across the board.